In a way, nothing matters in the comics Marvel is publishing right now. The future of the company's superhero universe just got officially revealed today, via teasers that leaked out earlier this week. And the Fantastic Four — as a team and as a family — is nowhere to be seen. Secret Wars might hold the reason why.

Secret Wars is an extension of the character explorations that writer Jonathan Hickman has done with members of the Avengers and the Fantastic Four. It's focused on Richards' family nemesis Doctor Doom, after all. Here, he's a villain who's already won the big apocalyptic battle and subsequently remixed the Marvel Universe in weird, cool ways. The series also prominently features Black Panther, Dr. Strange and other characters from Hickman's New Avengers run.

(Mild spoilers for Secret Wars #4 follow. Hover over the top left of each image and click on the magnifying glass icon to expand it.) 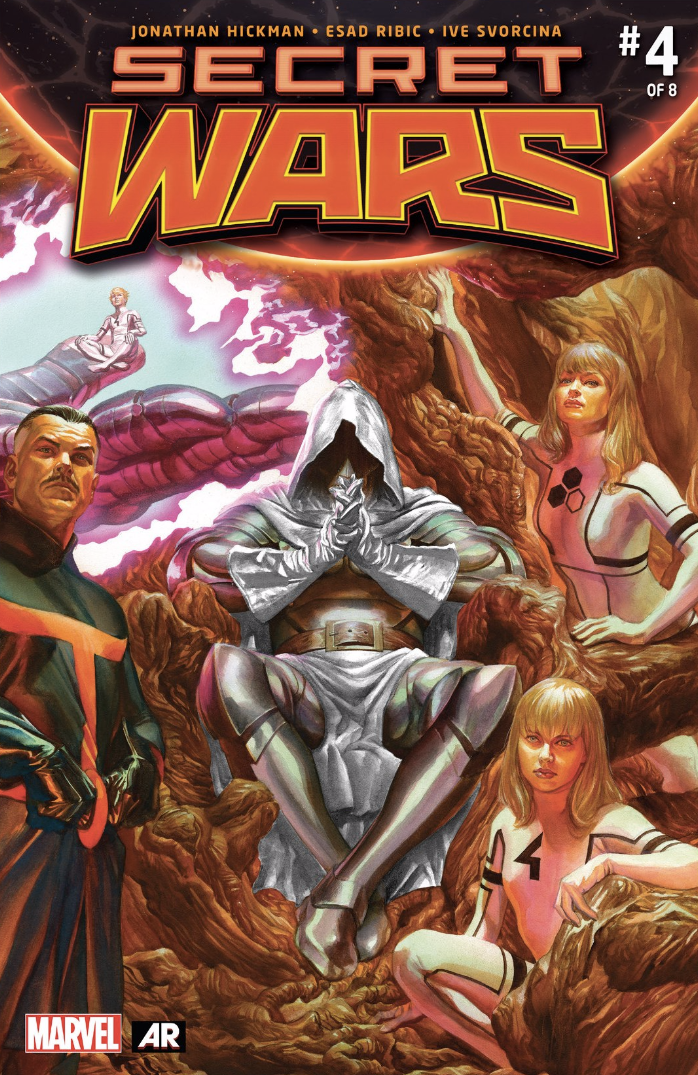 Marvel's teasers this week didn't just reveal the publisher's comic book line-up for the fall, but also showed off who will be in each series. Deadpool's in the Avengers. Galactus is going to be in the Ultimates (what?!?). The X-Men have a new line-up. Hell, so does Squadron Supreme. But there is no new line-up for the Fantastic Four, because Marvel is straight-up not publishing a Fantastic Four comic. Johnny Storm, you know, the FF's Human Torch, looks like he'll be hanging out with the Inhumans. The Thing looks to be a member of the Guardians of the Galaxy. Who can tell where the Invisible Woman is standing, and Reed Richards? No sign of him.

This all fits into the ongoing Marvel meta-drama, a mess of egos and movie licensing deals that has seen the comics publisher de-emphasise the X-Men at the expense of the similar and long-neglected Inhumans characters and that has seen a similar fade from relevance of the Fantastic Four. While it's unfathomable that Marvel would ever cut its X-Men line to zero, the lukewarm-selling Fantastic Four, despite its heritage as Marvel's first great modern super-hero comic, may have just gone the way of the West Coast Avengers.

Marvel's strange new FF-less line-ups arrive this fall. In the interim, we've got Secret Wars and Doom's strange new universe — the only thing that has survived Marvel's own crisis on infinite earths — to get us there. Now that we've seen who's going to show up in series coming after the current drama in Secret Wars is over, we can already intuit that this Doom-built reality won't be the universe where Marvel's All-New, All-Different initiative will be happening. Battleworld, an all-powerful Doom, the law enforcement army of Thors, the spin-off comics that show the surviving fractured-mirror realities... very little of it appears carrying over to the news series launching this fall.

For now, it seems like most of the intrigue happening in Secret Wars will be self-contained. That makes the proceedings powerful. A lot of Marvel's past superhero events have found their dramatic tension in highlighting the philosophical differences between factions of heroes and/or villains. Civil War had Captain America and Iron Man on the opposite sides of a metahuman registration act. And the catalyst for Avengers vs. X-Men was, essentially, a disagreement about the means and methods that mutantkind could use to shape its future.

Secret Wars is different in that it's primarily concerned with investigating the psyche of Victor Von Doom. The considerations at the heart of Secret Wars have to do with victory. 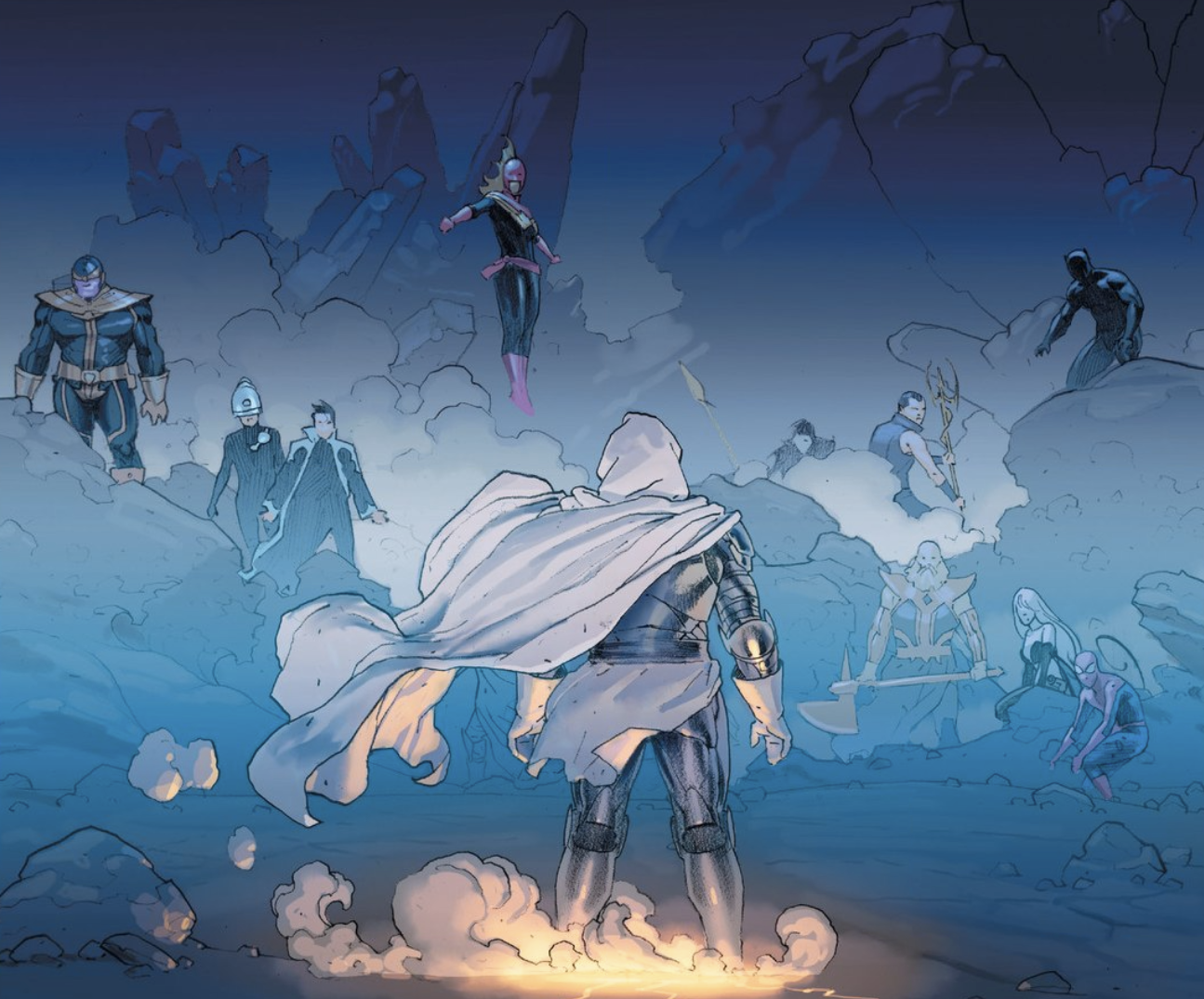 It's about what one does with ultimate power and how that reveals aspects of your inner self. Stephen Strange has said that he could've been the god that Doom wound up becoming, but admits balking at the possibility. As for Doom — despite being the master of the universe that he always thought he should be — he's not be a deity at peace with himself. When he learns about that his native universe's version of Reed Richards is still alive in today's issue #4, he doesn't seem like he's transcended the petty concerns of humanity at all. 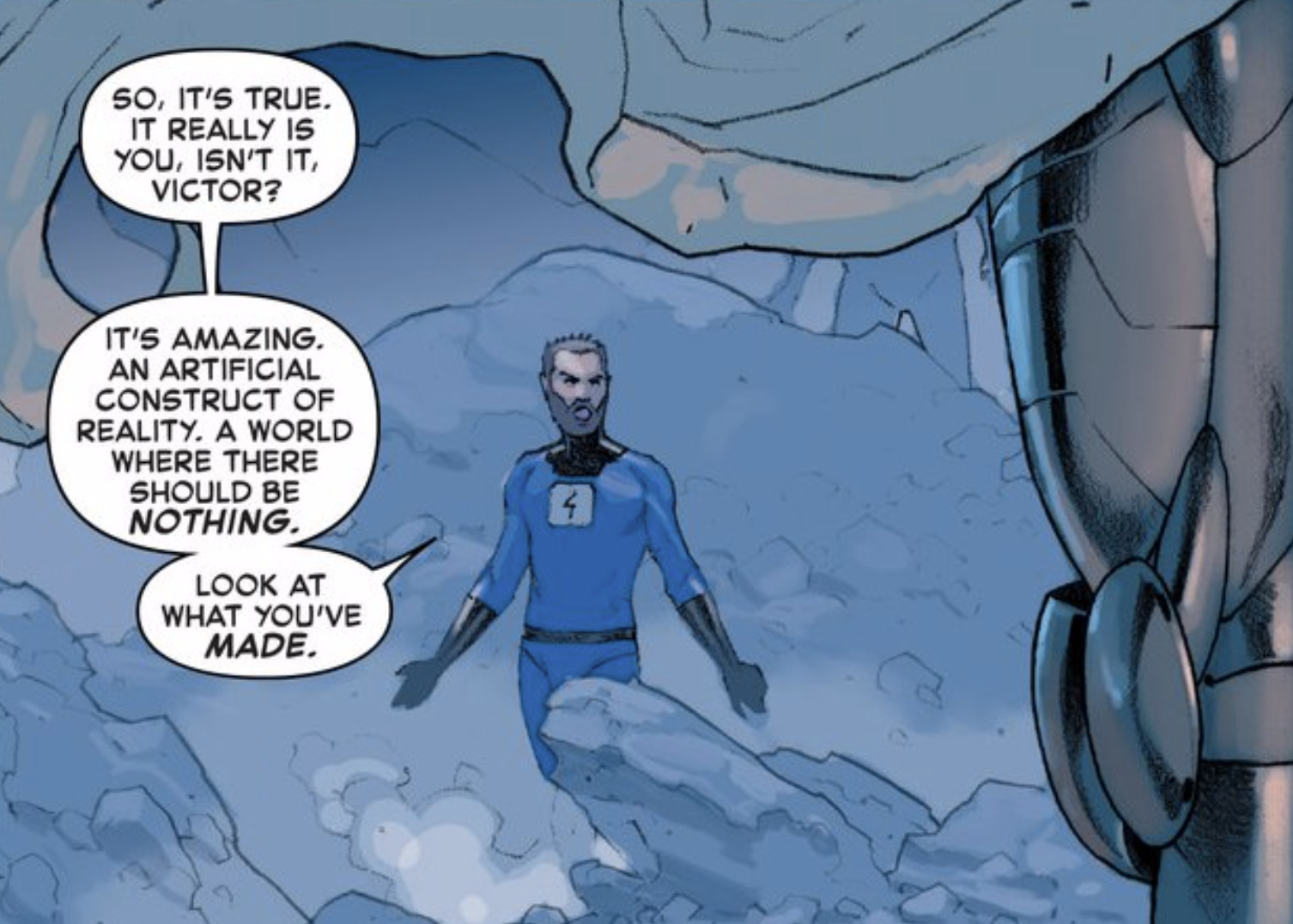 Omnipotence doesn't free you from your obsessions. It may, in fact, only amplify them.

The Richards/Doom moment gets a lot more weight with the conspicuous absence of Mr. Fantastic from the teasers that Marvel's put out so far. It makes you wonder if both Reed and Doom might be missing in action when Secret Wars is all done.

Speaking of the future, there's one sequence that teases a very important shift for one of the characters in Secret Wars. While all hell is busting out in a battle between Doom and the survivors of two pre-existing Earths, this moment happens between Dr. Strange and the Black Panther: 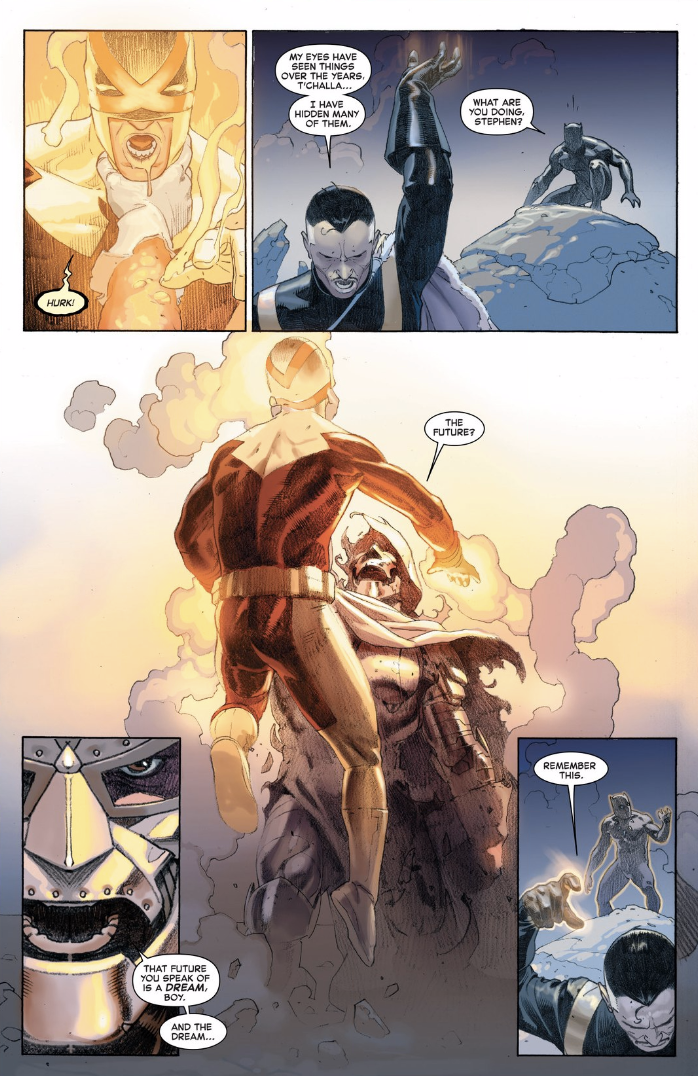 The Panther's been revealed to be part of a new Ultimates title. A team like the one in the image below seems engineered to take on cosmic-level adventures. T'Challa already remembers the now-dead past of the multiverse so maybe Strange's spell will empower him to remember the patchwork reality of Secret Wars and follow up on whatever echoes it leaves behind. 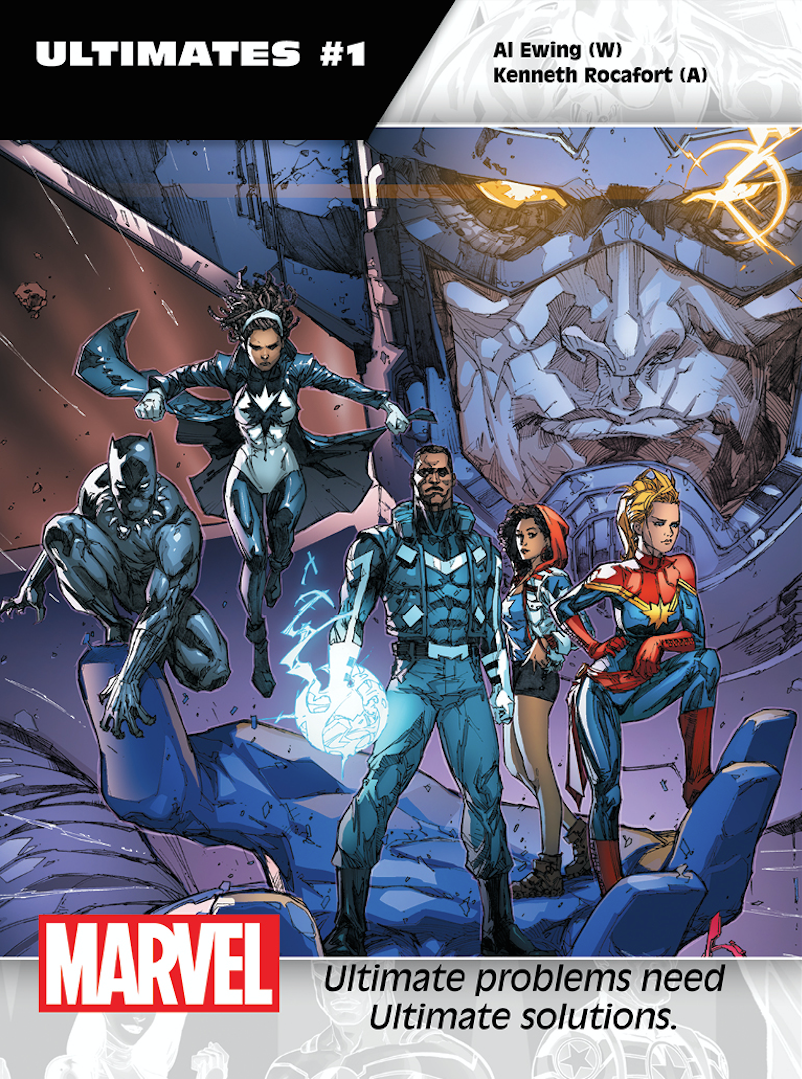 One of the most subtle pleasures Secret Wars offers is the ability to read it as a metaphor for Hickman's relationship with the superhero-centric work he's turned out over a long tenure at Marvel. All the work he's done culminates into something ephemeral and fleeting. He's a high-profile writer at the company but will be taking a break from Marvel-related projects once this tale is done.

The business reality Hickman has worked under has seen Marvel de-prioritise Fantastic Four — the title that helped launch its present-day empire, remember — because the company doesn't control those characters in Hollywood. Hickman earned his superstar status while working on the Fantastic Four, so it's ironic that his last Marvel work (for the time being) might be the device that puts the Fantastic Four in deep freeze.