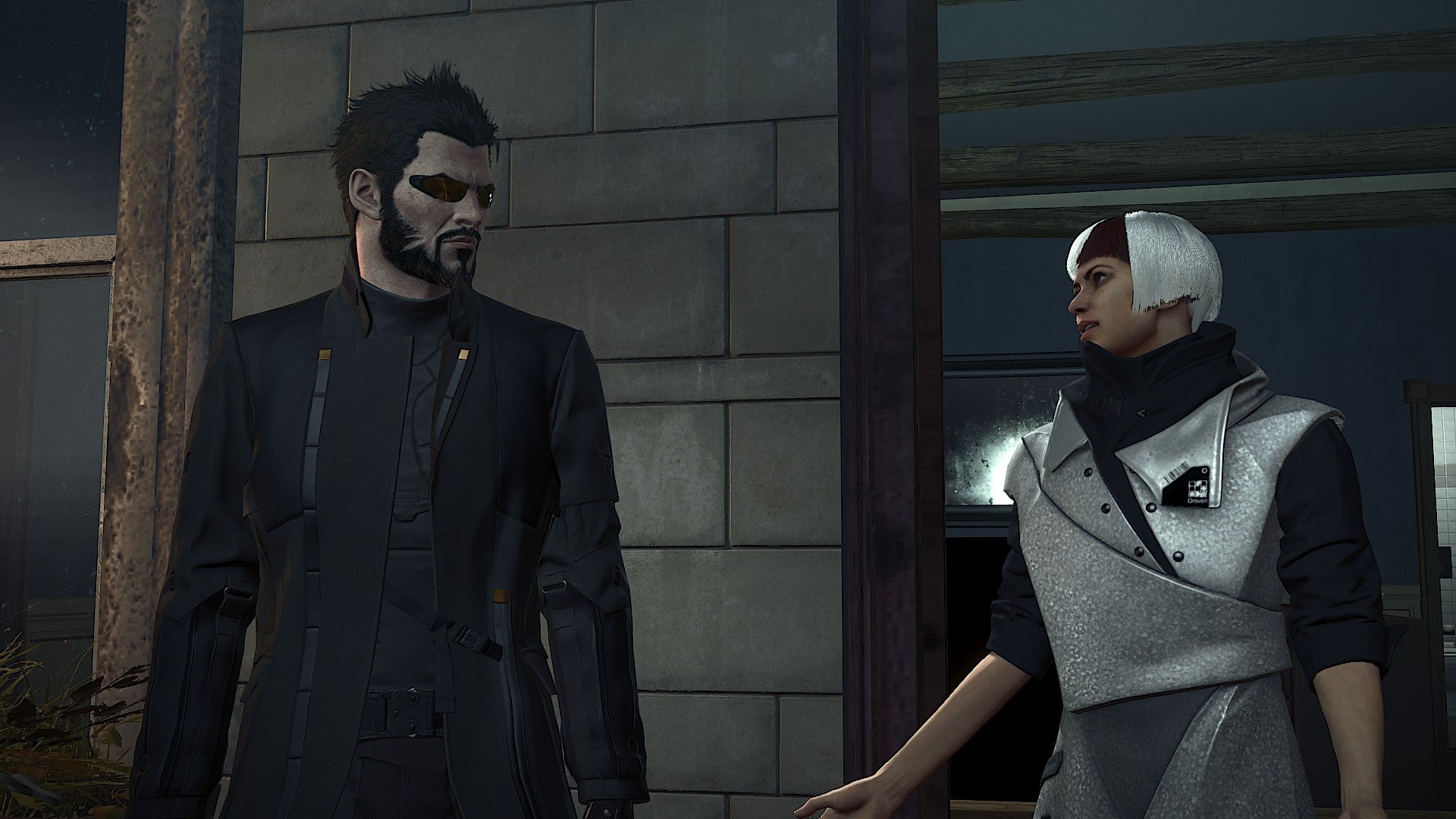 Deus Ex: Mankind Divided's latest DLC, System Rift, has shady corporate dealings, Illuminati conspiracies (and characters saying "Illuminati" with a straight face), and Adam Jensen answering video calls shirtless. But unlike the campaign, where characters have all the affect of conveniently-placed crates, System Rift is full of moments of unexpected personality.

The DLC is a single-level standalone to the base game (you get the Praxis to create a new Jensen, which I generally find tedious). It sees Jensen reuniting with Francis Pritchard, Sarif Industries' head of cyber-security from Human Revolution. Pritchard wants Jensen to break into the Palisade Blades, the data storage stronghold of the campaign's Palisade Bank.

He has high-minded hacker reasons for this (as well as a hilarious hacker name), but there's also a human core: the mysterious death of Simona Saridakis, whose husband Niko you can meet outside the Blades. Saridakis was killed by the Blades' state-of-the-art security, but the corporation has covered up the details and even used it to promote its robots and heat-sensing drones.

Though they haven't talked in a year, Jensen and Pritchard immediately jump into bickering like good friends or dare-I-suggest ex-lovers. Jensen's tone is pretty flat in Mankind Divided; his emotional range seems to go from bored to parentally disapproving. But the opening minutes of System Rift are different. You can see for yourself in the video below, posted by Elias Toufexis, Jensen's voice actor:

Their entire exchange is so distinct from Mankind Divided's usual conversations — I was most surprised to find Jensen and Pritchard interrupting each other, which doesn't seem to happen much in other dialog. This little touch does wonders for making their relationship seem complex and lively. I actually wanted to help Pritchard (and not just because I knew there'd be a funicular involved). I wasn't terribly interested in the reasons behind the heist; these opening moments made me actually care about Pritchard.

The Blade takes the level design of Mankind Divided's Palisade Bank up a notch, featuring open areas, heavily-guarded vaults, and lots of secrets to uncover that expand the narrative of Deus Ex's mega-corporations. If you disregard Pritchard's orders not to snoop around, exploring the Blades' offices and hacking into everyone's emails gives an intriguing slice of life under a corporation that seems to spend the bulk of its resources spying on its workers.

There are dispassionate reports of employees' lives — substance use, interviews for other jobs, relationship changes, family stresses. These stand side by side with parental memos about employees not properly sharing the company's communal fruit in the morning, chastising them for using too much toilet paper, and reminding them that the company's new fragrance-free policy isn't a joke (it's actually a coverup for some experimental technology, because Deus Ex).

Even a moment in which the higher-ups worry about cyber-security breaches includes a hint that the hole was first opened by employees using an unapproved device to stream a "sporting event," an awkward turn of phrase that reveals the Palisade Bank Corporation's own inability to quite realise it needs to have humans in it (the fact that it keeps 'accidentally' killing them with robots probably doesn't help either).

One of my favourite moments was coming upon this desk of an employee who went on vacation, during which time his colleagues turned it into a ballpit. It's a moment of environmental storytelling that Deus Ex's designers excel at, but in the grander scheme of the Blades it stood out sharply, a burst of colour among the tidy desks and dark colours of the rest of the building. 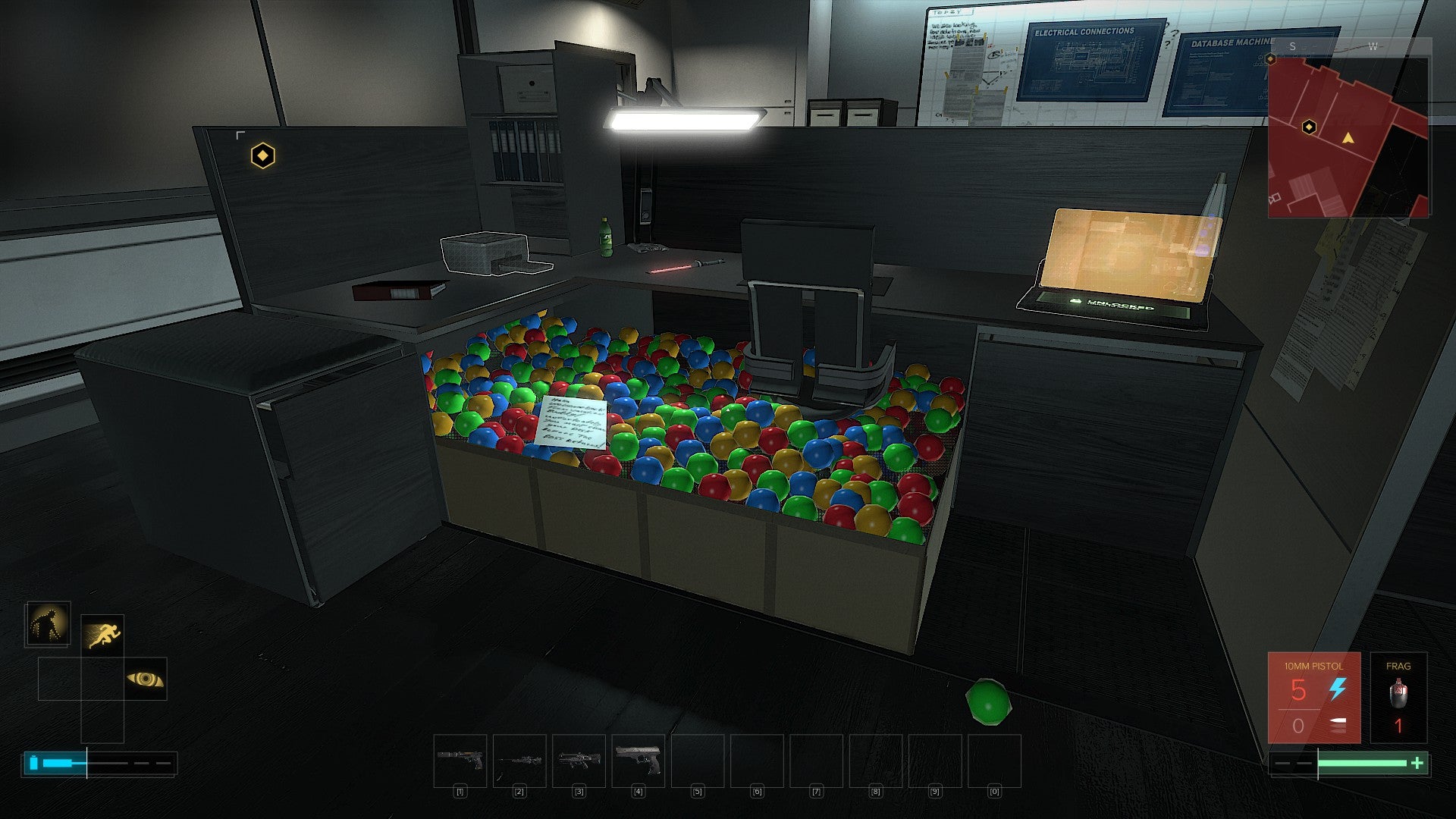 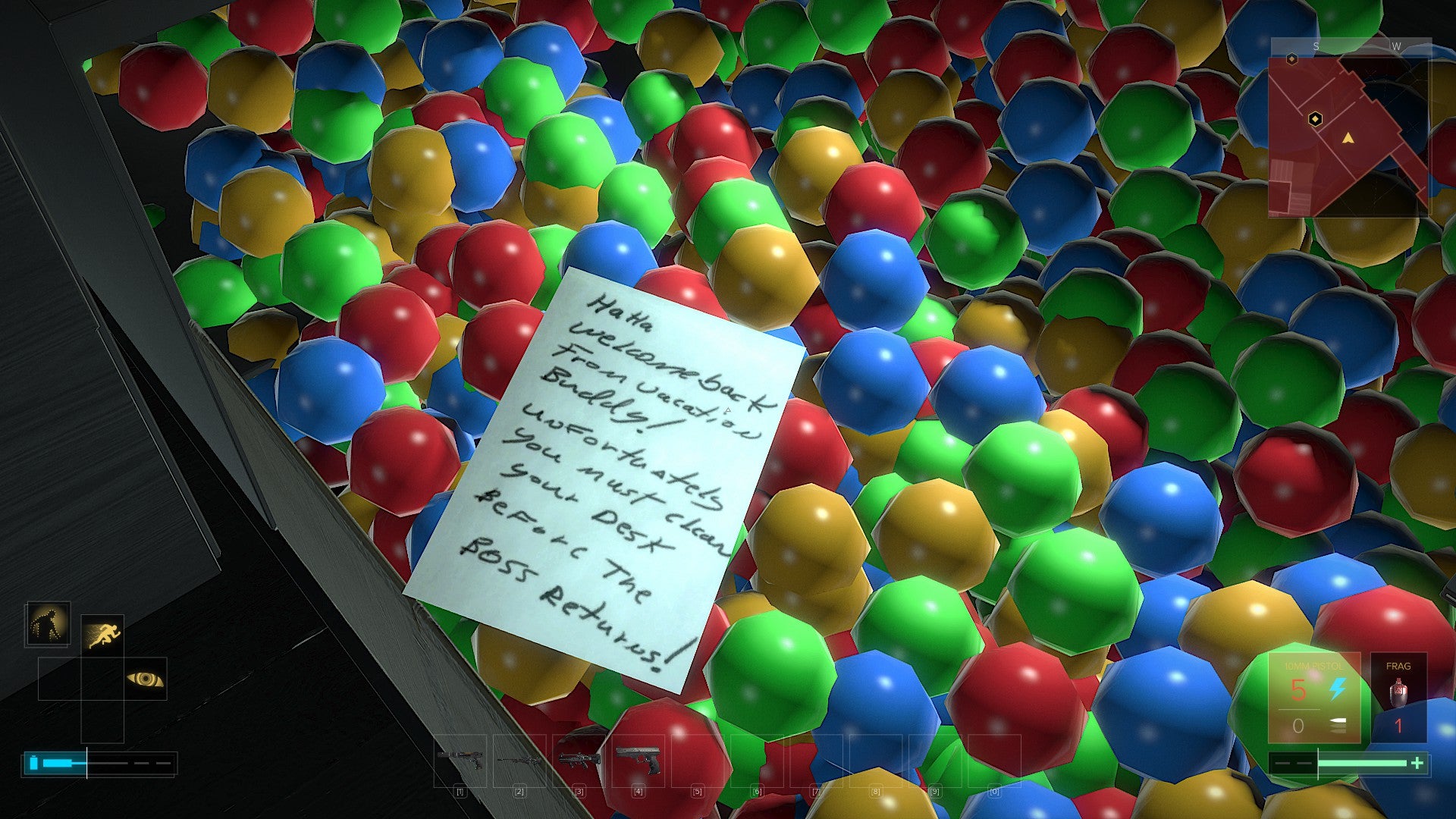 We see a few regular Blades employees during the course of the mission, though they aren't nearly as interesting in person as they are in their emails. Jensen has to make his way through floors and floors of the building to reach his goal, patrolled by guards, turrets, and cameras. If you trip the alarm security robots deploy; we saw them in the previous DLC, Desperate Measures, and it's nice to get more of a sense of their threat here.

Many of these floors, as you'd expect from an actual building, have very open plans with few spots for cover, especially as they rise away from public areas like the lobby and the atrium. One floor is full of boxes, which two guards amusingly discuss:

The game loses its way from these lighter moments by trying to tie Mankind Divided's Breach mode into the DLC's plot. There's a Breach-style level here, as there was in the base game, though in System Rift it's livened up a bit by adding walkways and platforming puzzles. 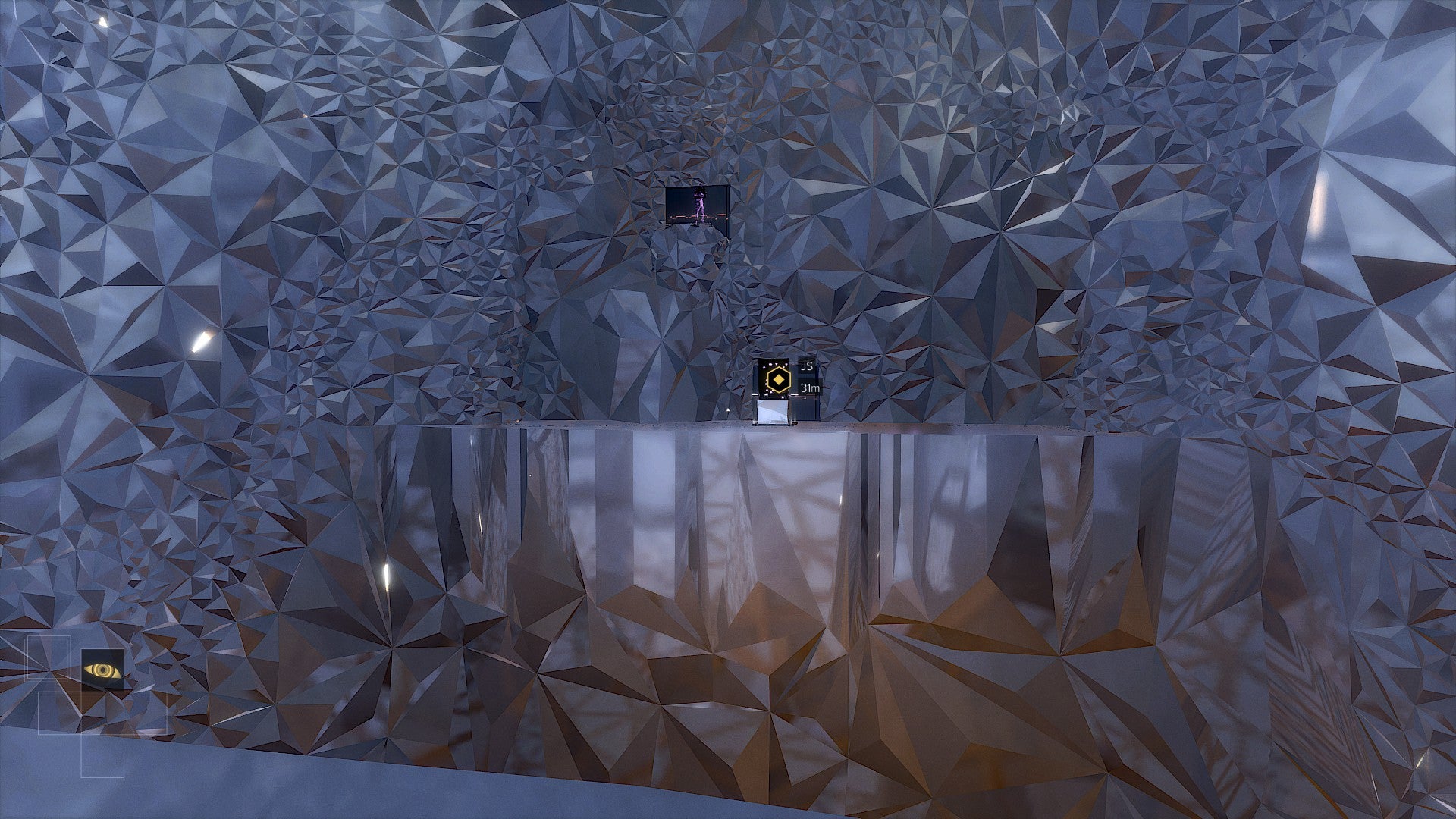 In System Rift Jensen has to rescue Pritchard from inside the computer, and while the idea could add emotional weight to their relationship — I was genuinely concerned when I first saw him stranded across a chasm from me — it mostly feels like marketing for Breach mode, as the plot bangs on about 'rippers' and 'The Breach' and how important what Jensen has done is.

For me, few things turn me off more in games like being told I've done something important, and all the efforts to hype Breach mode left me cold.

In a somewhat similar moment, Pritchard's hacker friend ShadowChild asks Jensen to put a figurine on an old friend's desk in the Blades. I didn't discover the reasons for this, but the familiar-looking figure felt less like an in-joke and more like a corporation trying to sound like people. 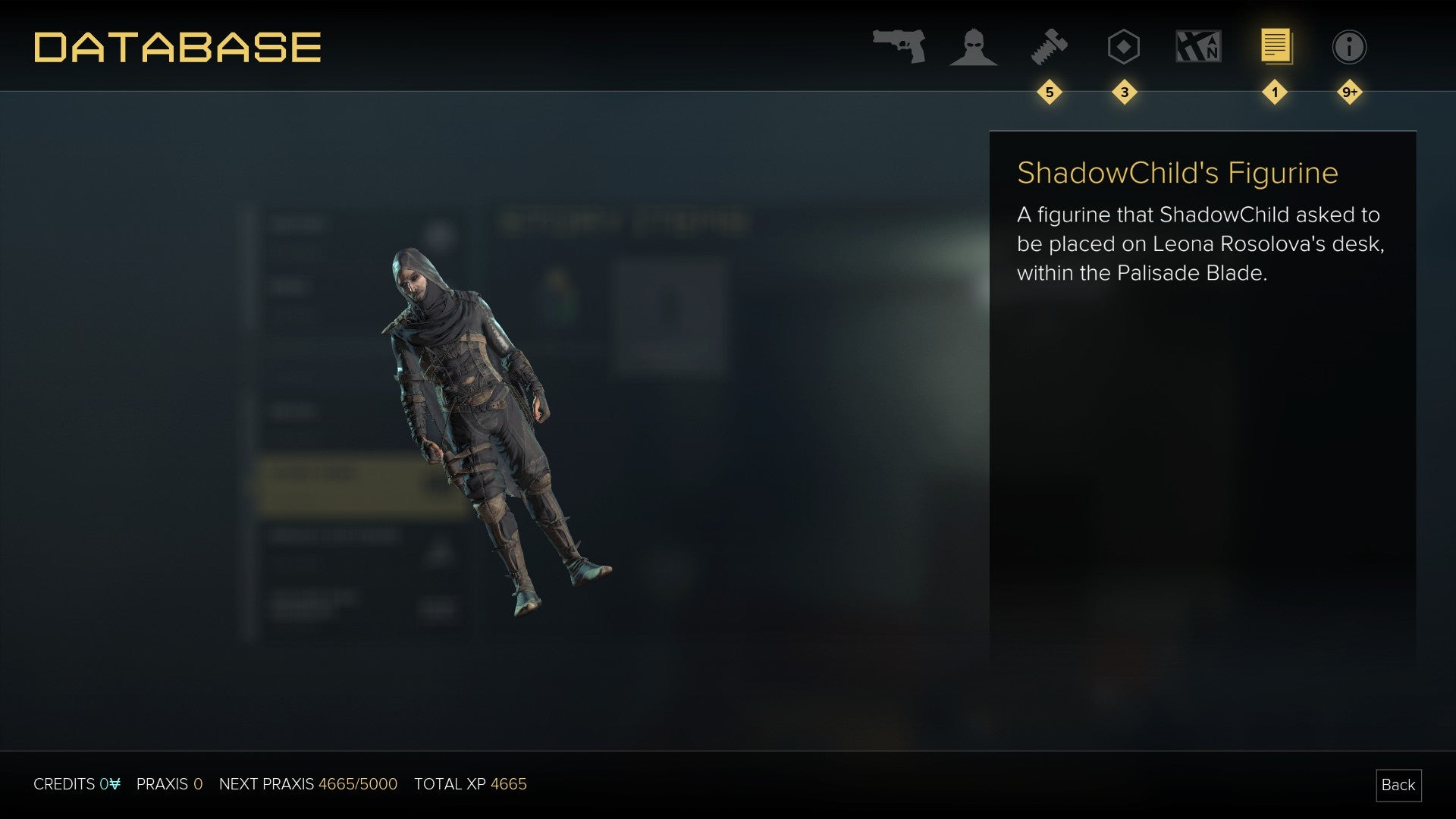 The very end of the game returns to the emotional core of the beginning, with a brief final exchange between Jensen and Pritchard again full of feelings and a natural flow. System Rift feels as conflicted as the whole of Mankind Divided, but it surprised me with moments of genuine human interaction and connection.