My Tragic Marriage With A Skyrim Werewolf

When I first met Aela, I could tell she was going to be trouble. I was a newcomer to the city of Whiterun. I wanted adventure. All I got was heartbreak.


Fighting guilds aren’t my thing. Blusterous bastards bragging about their broadswords has little appeal. I’m a sneaky sort. I stick to the shadows and shoot my bow when no one is looking. The week before I met Aela, I was working jobs with the Thieves’ Guild in Riften. Picking pockets and committing burglary for a mere handful of coins was getting dull.

I needed something more. Damned if I didn’t find it. I’d heard about the Companions before. They were a well renowned fighters guild. It seemed to me that clearing the undead from tombs or slaying wild bears would be far more exciting than stealing granny’s piggybank. As it so happens, they were looking for new blood.

Kodlak Whitemane was their guild leader at the time. He said I had potential. I made the rounds and got to know whoever I could. Most folks weren’t impressed. Vilkas was a big lummox who scowled every time I walked by. Nadja Stonearm give me some hardcore side eye before speaking up.

“If the Circle vouches for you, I’m sworn to respect their judgement. But that doesn’t mean I like it.” What a bitch.

I helped and did some small chores. Eorlund Grey-Mane had just finished working on a shield. Told me to bring it to Aela the Huntress. I couldn’t find her in the yard so I snooped around the living quarters until I could find her room. 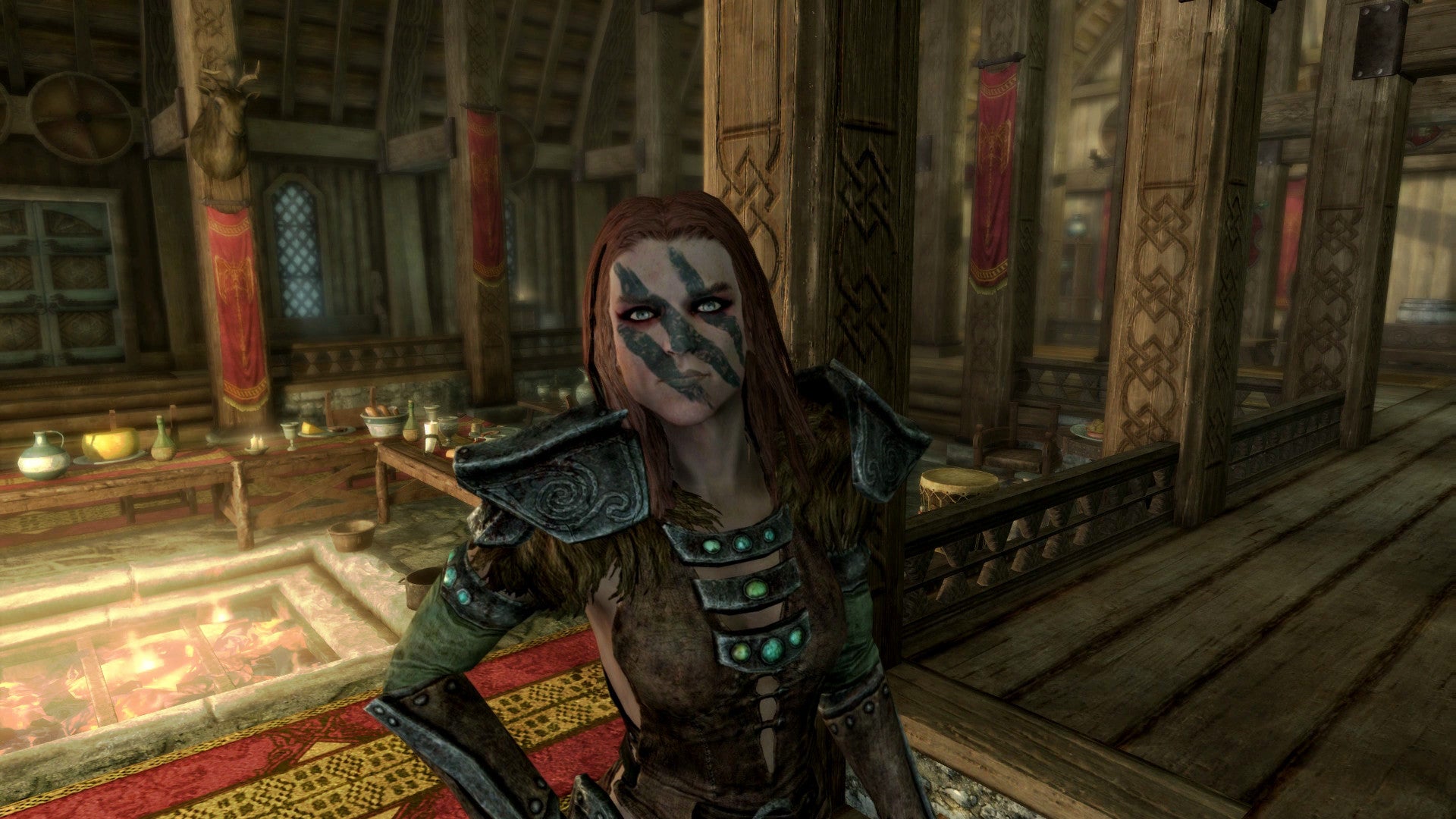 “Dame was nothin’ but trouble.”

There she was. Tall and proud, locks of messy brown hair fell across her face. Her features were sharp and she hid behind a mask of face paint. Maybe she thought it made her look intimidating. I thought it was mysterious. Who was this woman?

She was happy to have her shield. We became close. Fighting giants and even occasionally hunting deer. It didn’t matter that I was a thief and she was a warrior. It felt good to be around someone who liked me for who I was.

I’m skipping some particulars here but I did plenty of work with The Companions. One night, Skjor invited me to a fancy place they call the Underforge. It’s a cave under the forge. The Companions were never particularly creative. Anyway, I walked down there and a huge wolf is staring right at me. 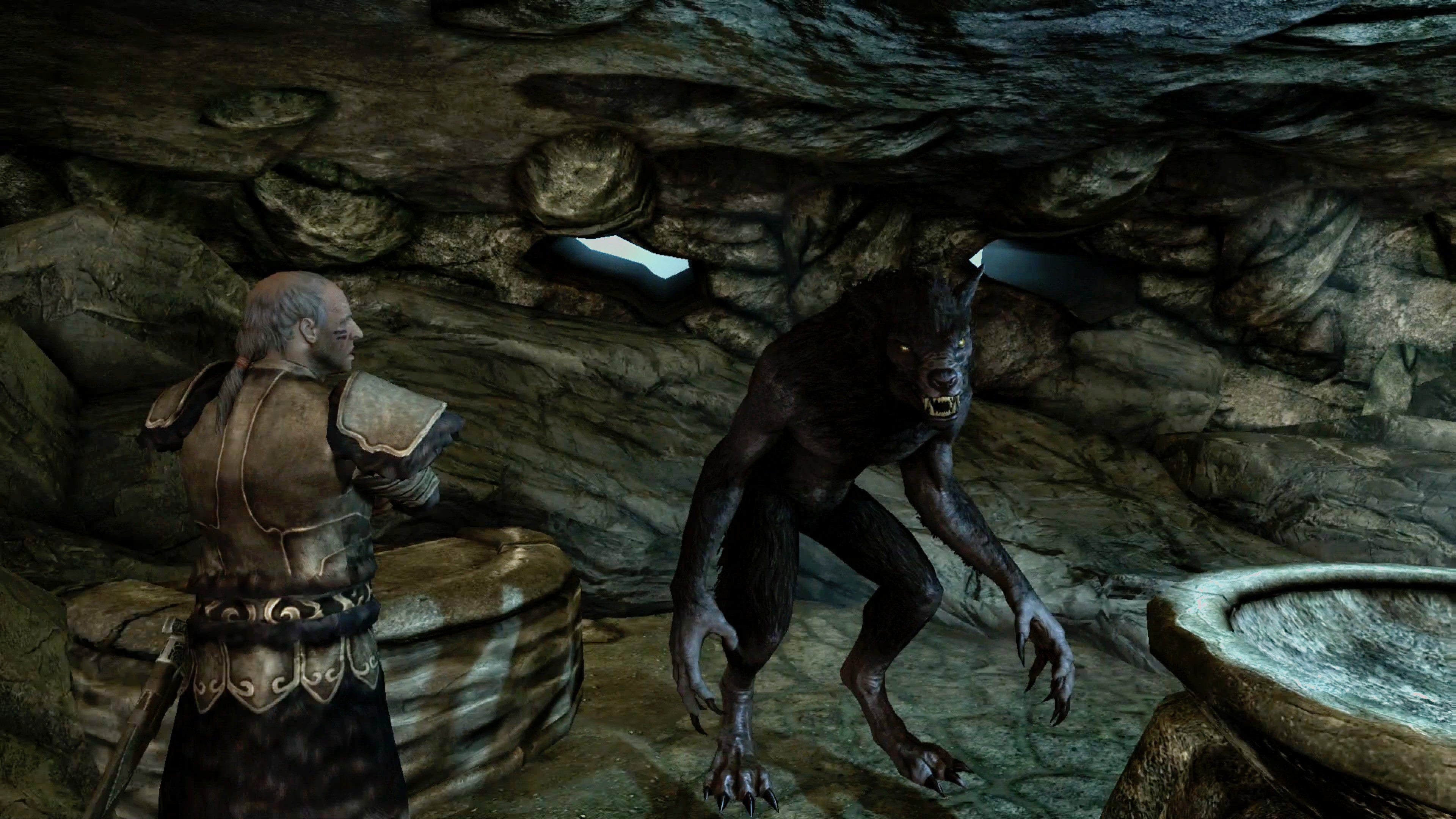 Wolfish grin doesn’t even begin to describe it.

“I would hope you recognise Aela even in this form. She’s agreed to be your forebear.”

Funny thing is that I did recognise her. It was the eyes. Even as a giant wolf, she had beautiful eyes. She wanted to grant me her gift. She wanted me to be a werewolf like her. I accepted. Skjor cut her wrist. The blood spilled into a basin and I drank it. It tasted good.

The rest is a bit of a blur. Some screaming guards, a wolf’s howl and a lot more blood. I woke up in the forest. Aela was there. I may or may not have been completely naked.

“The first time is always the most… intense.” She was right.

One day, a bunch of fanatics attack our mead hall. Werewolf hunters. They kill Kodlak. Old man didn’t deserve to be butchered like that. So we hit back at them hard. It was messy and I was angry. Killed a lot of people. Even went the extra mile and made sure that Kodlak’s soul was at ease.

This might sound like a lot of mumbo jumbo to you but when you become a werewolf there’s this demon prince named Hircine that gets ownership over your soul. When you die, you go to his Hunting Grounds for eternity. Kodlak wanted to be with his ancestors in another realm so we did some magic to make that happen. The old bastard made me the leader of The Companions before heading into the beyond.

Here I was, in love with a wonderful werewolf and in charge of one of the most prestigious fighting guilds in all of Skyrim. So I popped the question. She said yes. It was great. Lots of moonlit nights killing hapless travellers on the road and prowling around the countryside. Idyllic, you might say. After a while, I surprised Aela with a house. A place to call our own. 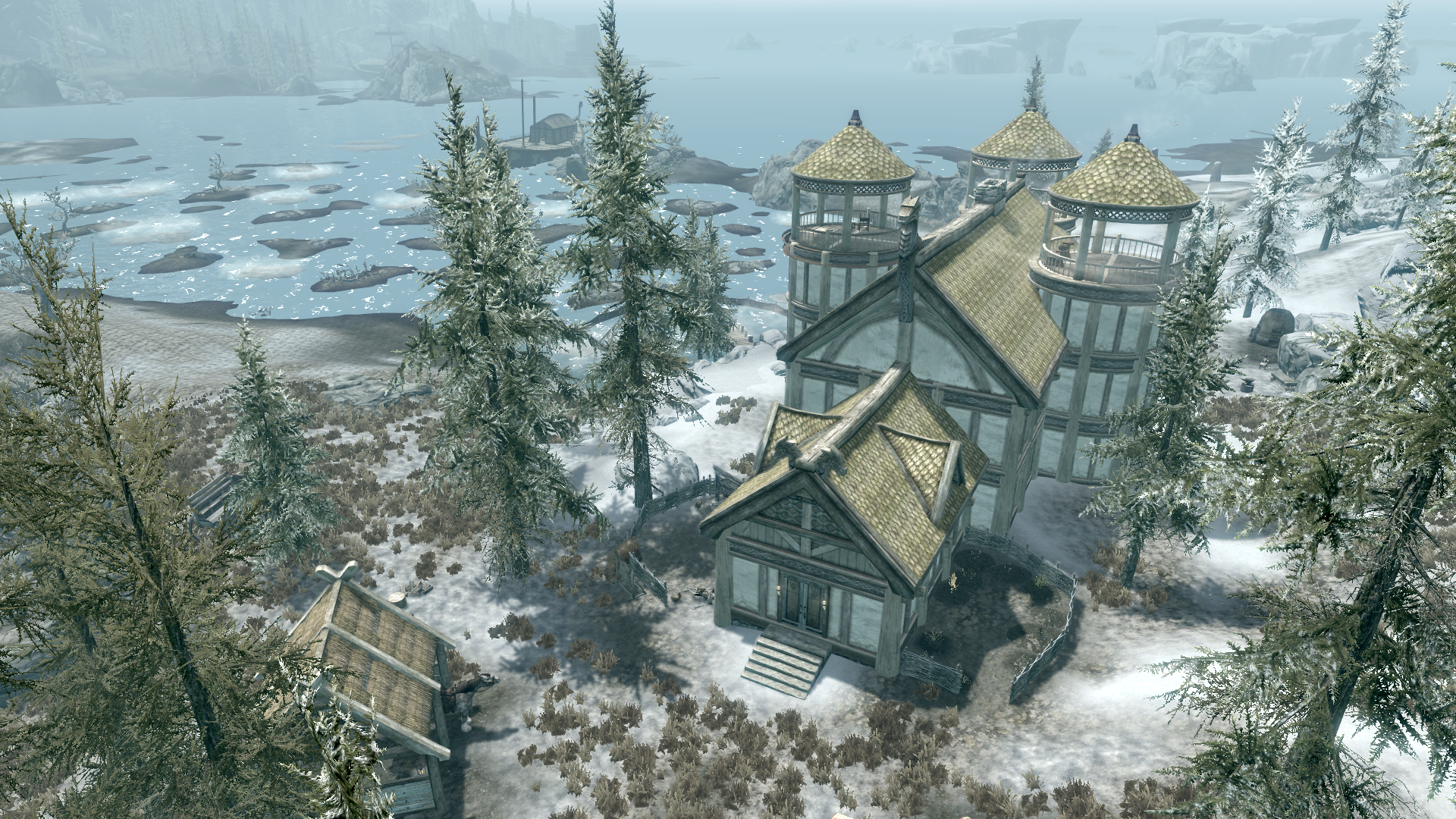 It wasn’t anything special to start with. Windstad Manor wasn’t really a manor. More of a shack. It was good enough for us though. I slowly worked on expansions to the manor while Aela killed any bears or bandits that wandered into our yard. The house got big. We decided the nest was big enough for some baby birds.

I remembered this kid from Windehelm. Cheerful orphan girl selling flowers by the name of Sofie. Asked her if she wanted a family and that’s what we became. An honest to God family. Aela was great with Sofie and so enthusiastic about having a kid that we actually adopted another girl off the street of Whiterun named Lucia. We never told our children about being werewolves.

Living in such a dangerous part of Skyrim, I ordered Nadja Stonearm to be our steward and watch over the house as a form of ironic punishment for her earlier nastiness. I don’t think Aela enjoyed having another woman around the house. Maybe she thought something was up. Who can say?

Aela started to disappear for long stretches. In her absences, the children asked if we could take in a fox they found. We named him Kit. Part of me worried that my horrible wolf hunger would get the better of me but I managed not to eat their pet. Apparently, this is one of the kids I adopted?

During one of her absences, Aela was kidnapped by bandits and held in a nearby cave. It took me two weeks to realise. All things considered, she didn’t seem to mind but I became obsessed with protecting my family. I had been weak and my love had paid the price.

I sought out the Dawnguard, vampire killers who knew special fighting techniques. It was a bad choice. I got caught up in a big arse battle between humans and vampires. Some jackarse named Lord Harkon wanted to blot out the sun forever. His daughter Serana wanted to help us kick his arse but as I confronted him, he spoke with poisonous words. He knew I was a werewolf.

“Yes, I can smell it on you. The power of my blood will purge that filth and make you whole again.”

I won’t lie. It was kinda hot.

I felt a terrible guilt. I could no longer assume my werewolf form. But I was stronger now. That’s all that mattered, right? I left Harkon to his own affairs and went home to my wife. Who cared if the world ended up purged into endless night? I had Aela. I had my wife.

We tried to make it work for a while. Vampire or werewolf, we loved each other. That’s all that mattered, right? Wrong. I could tell by Aela’s glances that she was deeply pained. One day, Kit the Fox went missing. My children stopped talking to me. They acted like it was my fault.

Aela and I sat down to talk about everything. She offered to make me a werewolf again. “Hircine doesn’t usually bestow his favour on the fickle,” she told me angrily before offering me the power of the wolf. I hesitated. Something about being a vampire called me. It made sense and I was stronger than ever. I told her I needed to think about it longer. 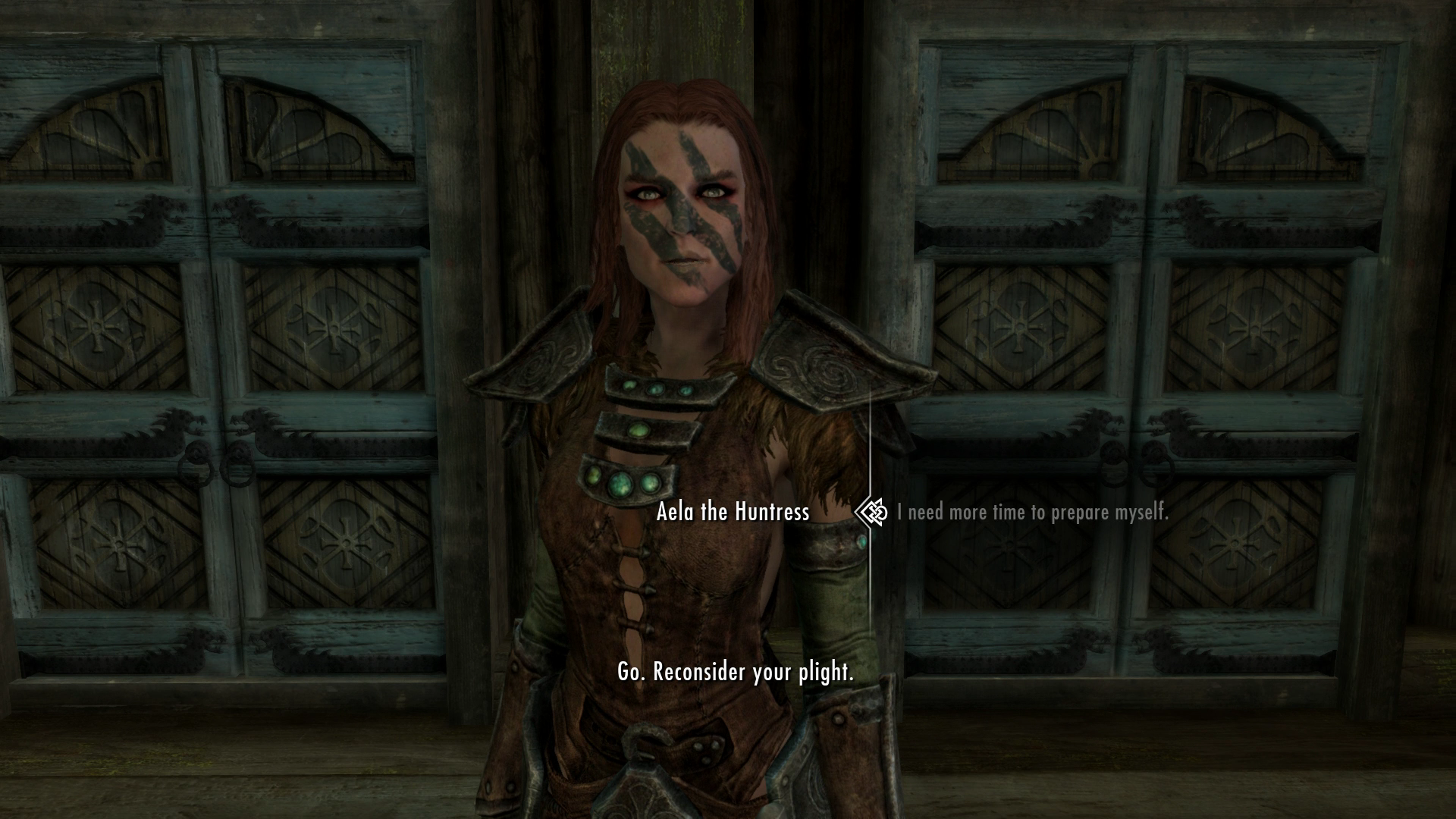 That was it. That was the last thing my wife ever said to me. I left our house and started running. I never looked back. I shifted into my vampire form and lit a convoy of Imperial soldiers on fire before flying off into the night. That was over three years ago.

I sometimes wonder what would have happened if I gave up my powers and turned back into a werewolf. Occasionally, I worry about my children. Did they ever find another fox? I think of Aela. When we die, will we be reunited in Hircine’s Hunting Grounds? I don’t know.

Maybe I’ll head back someday, swallow my pride and howl beneath the moon with my wife once more. But I doubt it. 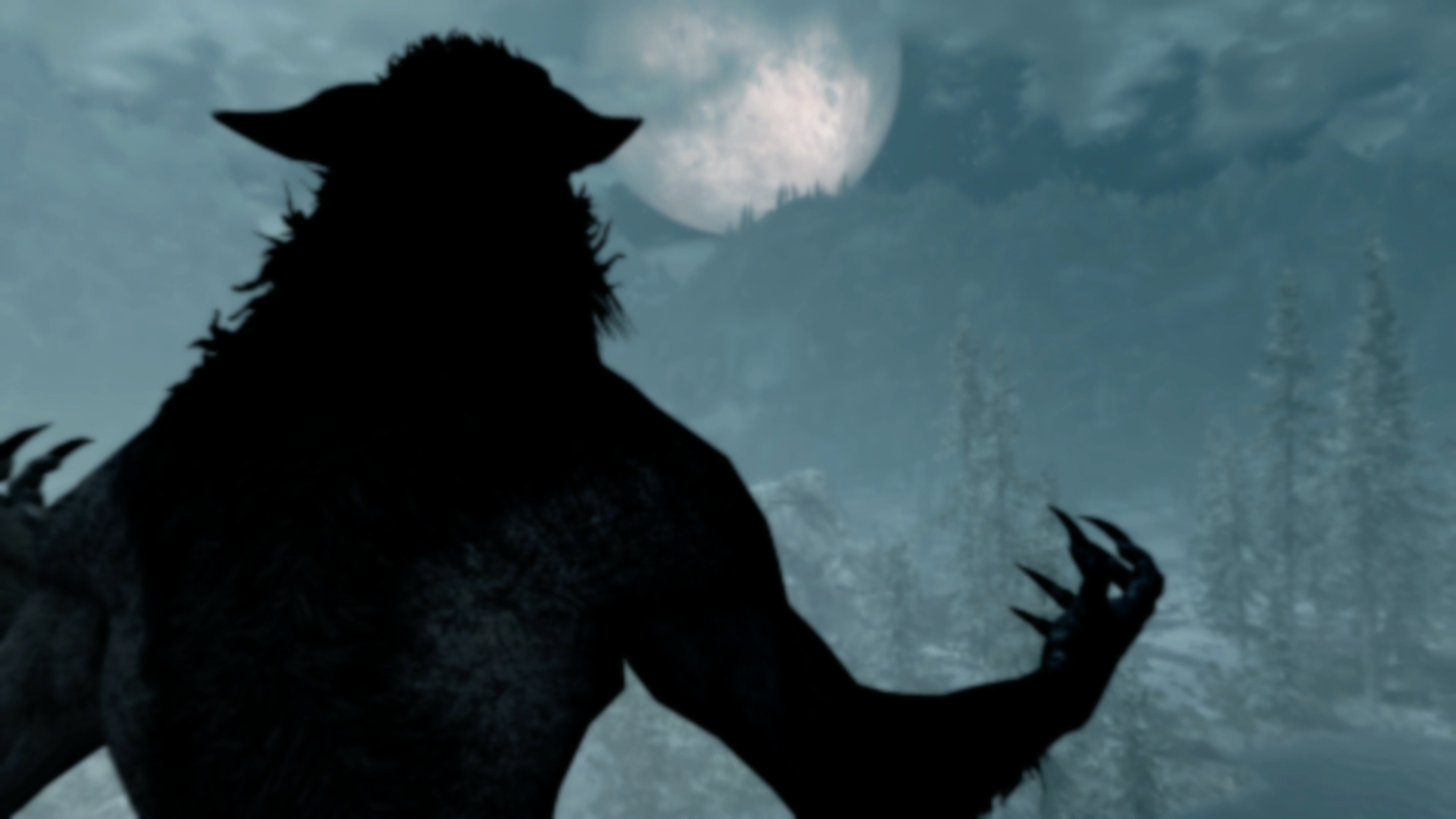