Heading into CES 2017, we had a good idea as to some of the big trends we’d see. And we weren’t totally wrong – Amazon’s Alexa assistant was baked into gadgets everywhere, even in cars! But looking back at all of our coverage, there was plenty we had no idea about. This is the best stuff we saw at CES 2o17.

TVs that seem to disappear

TVs are always a big draw at CES, and this year was no exception. Mercifully, the curved TV gimmick finally looks like it’s on its way out.

In the biggest trend to emerge, Sony, LG and Samsung all moved the core components of their flagship TV sets to outside hardware. In the case of Samsung, all of the ports and brains of its new models are housed in an outside box. Sony built the guts for its top TV into a subwoofer that doubles as a TV stand.

But for my money, the most impressive TV was the new W7 from LG. This OLED TV is just 2.5mm thick — literally thinner than my finger. Everything that actually powers the TV is jammed into a futuristic-looking Dolby Atmos soundbar. I want it. 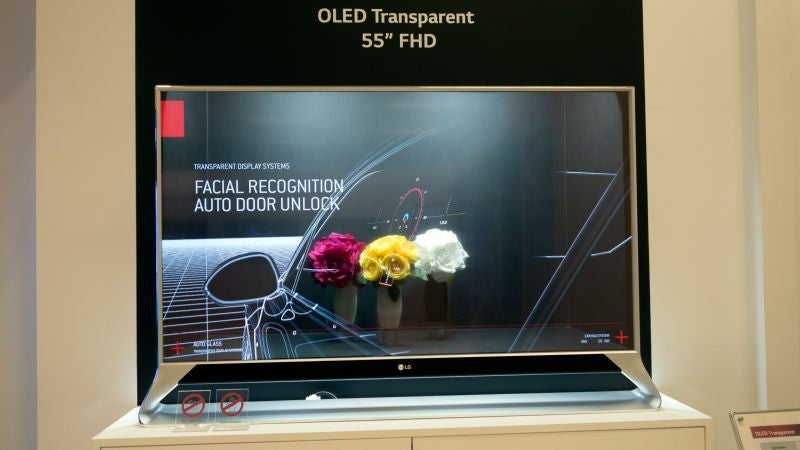 LG also had a prototype OLED TV that is 40 per cent translucent. I’m not sure if I see the use case quite yet, but anything that brings us closer to Minority Report is good with me.

Honda showed off its new Riding Assistant technology that keeps your bike balanced when it’s moving at speeds less than 5km/h (like when you’re pulling out of the garage or stopping at a traffic light). The tech will even work when the rider isn’t on board, meaning you never have to worry about your bike falling over on its side ever again.

This is still a concept, so we might never the tech in actual bikes, but it sure does look cool.

Razer showed off a lot of cool gadgets at CES, but the coolest was definitely its prototype of a gaming laptop with THREE 4K displays. That’s right, this beastly laptop has three 17.3-inch displays pushing millions of pixels. It’s one of the coolest things we’ve seen.

Dubbed Project Valerie, the laptop is powered by an Intel Kaby Lake processor and Nvidia’s 1080 graphics card. We just saw a prototype, but Razer says the final version will have the two side monitors slide out of the main monitor, for easy storage. 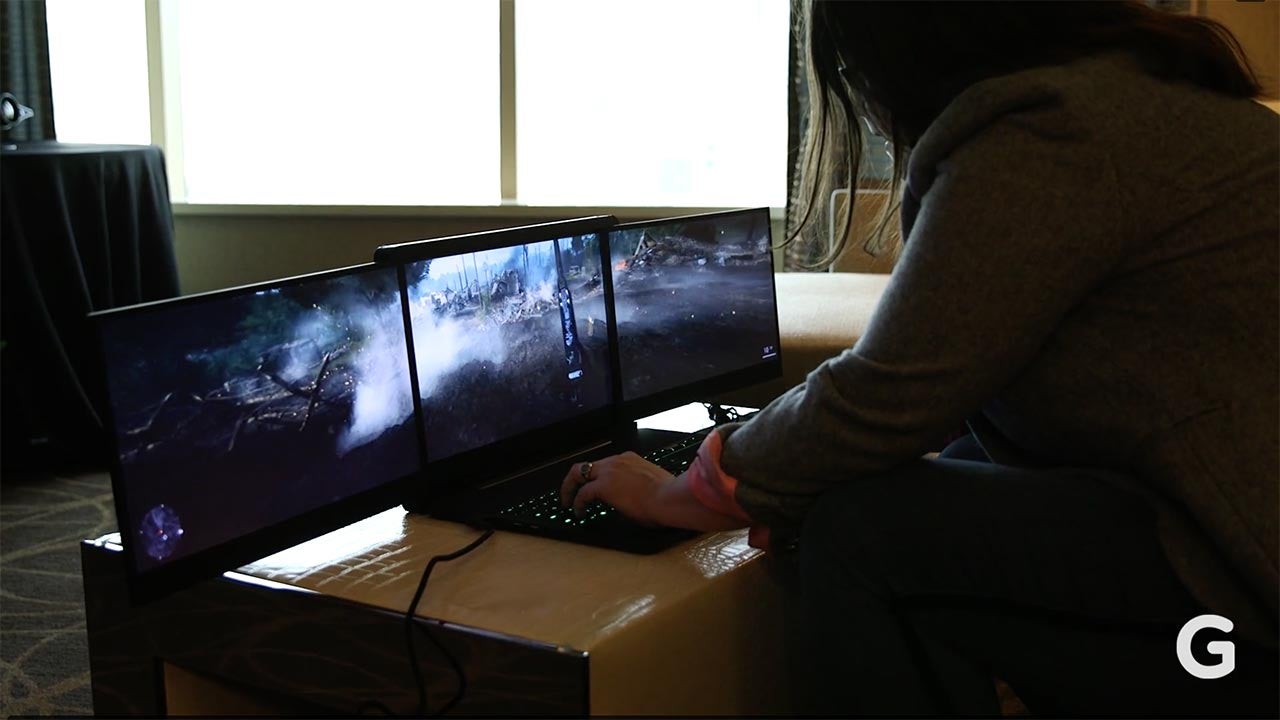 If this thing does come to market — and that’s a big if — prepare for it to be expensive. But price, weight and the fact that it will inevitably be hot enough to cook food doesn’t even matter. It’s a 12K gaming laptop. Hell yeah. When pointed at the screen, Project Ariana’s depth-sensing cameras can expand the edges of the TV onto the wall, making your game world more immersive. It can also work with the other lighting products in the room to alter colours across devices, so if a character goes into rage mode, not only does the screen go red, all the lights in your setup go red too.

We won’t see Project Ariana until at LEAST very late 2017, but if it can hit the market, it could be a cool alternative to VR headsets for gamers that want truly immersive experiences. Unfortunately, my Brooklyn living room isn’t big enough for VR, let alone something like this, but I love it anyway. 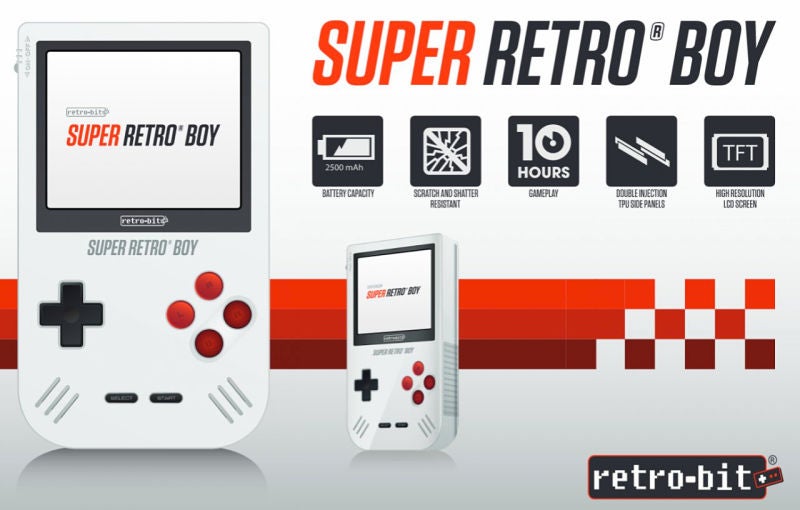 Super Game Boy is back

The massive success of the NES Classic Edition proves that all of us ageing millennials are obsessed with classic gaming. And what gets more classic than Nintendo’s original Game Boy?

The team at Retro-Bit showed off a brand new, souped-up Game Boy that shares the same form-factor as the original, but packs in so much more. It will play original Game Boy, Game Boy Color and Game Boy Advance cartridges. It also has a 10-hour battery life and a shatter-resistant display.

The best part? This little guy is only $US80 ($109)! We can’t wait to get our hands on one and relive playing the original Tetris, Super Mario Land 2 and Link’s Awakening. 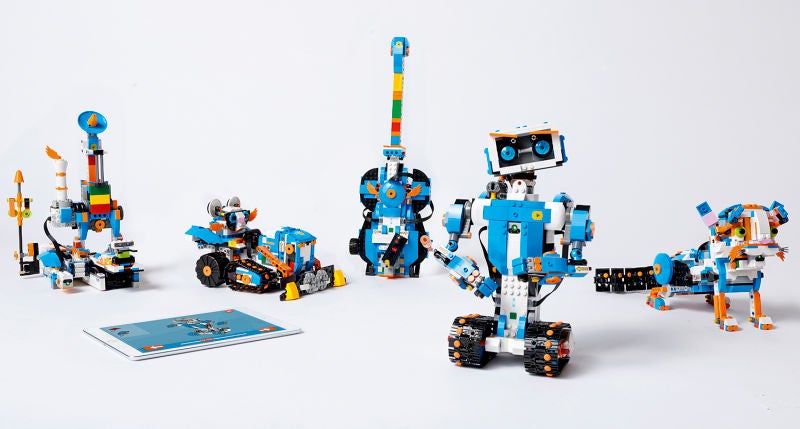 LEGO has had robotic kits for years, but the problem is that the builds always involved a lot of work and some mild coding skills. Granted, it’s a nice way to learn something new, but sometimes you just want to quickly build a robot buddy.

With LEGO Boost, the lazy amongst us can finally build robotic toys. Using a companion app, you just drag and drop different actions to control the robot, rather than having to tediously code in commands.

The kit comes with five different projects, including a cat, a robot, a guitar, a bulldozer and a LEGO stacking machine.

Intel’s Compute Card is so tiny 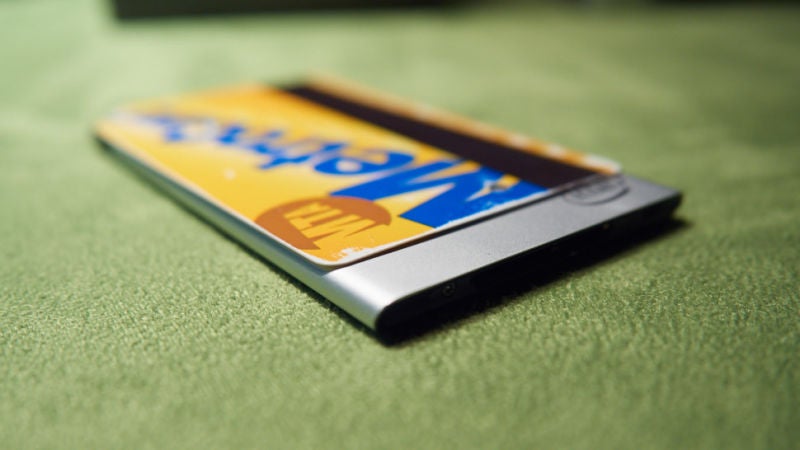 A few years ago at CES, Intel introduced its Compute Stick, its tiny-arse computer that fits into something about the size of a Chromecast. Now Intel has something even tinier — and potentially more useful — its new Compute Card.

The size and thickness of a few stacked credit cards, the Compute Card packs in a ton of power into the svelte package. You get a Kaby Lake processor, Wi-Fi, memory and storage. The idea is that you can then insert this card into a dumb monitor or other type of dock, and voila, instant computer system.

Intel is hoping it can get a lot of manufacturers on board to support the Compute Card — think everything from kiosks, smart TVs and smart appliances. For TVs especially, this could provide a smart upgrade path for new kinds of apps and processes. Just swap your old Compute Card out with another.

It will be a while before this hits the market. Intel’s first partnership is with the Foxconn-owned Sharp, for giant displays at shopping centres and hotels. But maybe if we’re lucky, one day we’ll be able to just carry our computers with us in our wallets.

Despite being a pretty blah year for wearables — mostly because no one is buying smartwatches — Sony still showed an amazing concept for an E Ink smartwatch at CES.

The concept, which was shown under glass, can change design and colour — meaning you can switch up your fashion statement depending on what you’re wearing or your mood. Strikingly, the E Ink display is thinner than a credit card.

If this thing ever does come to market, it might be Japanese only — but it’s such a cool idea, we can’t help but hope the tech makes its way into a proper product eventually.