Yuri On Ice: The Kotaku Review

This season’s breakout anime was Yuri on Ice, a welcoming show about an insecure Japanese figure skater named Yuri, and Victor, the Russian skating legend who mysteriously decides to become his coach. Yuri and Victor develop a relationship flush with love and young sensuality. Since October, fans feverishly watched the simulcast, playing “will-they-or-won’t-they?” while the protagonists teased sexual consummation.

The show is a sensation for viewers both versed and unversed in anime. For anime fans seeking more mainstream, queer anime, Yuri on Ice offers a beacon of gay relationships in modern media. As an anime with artistic or storytelling ambitions on par with its social media virility, Yuri on Ice falls short with its uneven animation quality and long, repetitive narrative sequences.

Yuri on Ice follows Yuri Katsuki, who is, in his words, “one of the dime-a-dozen top figure skaters certified by the JSF.” We meet him at the apparent twilight of his skating career, when he is feeling low and unsure about his future. Throughout that career, Yuri idolised Victor Nikiforov, a conspicuously charismatic skater who had won five World Championships. And after seeing a video of Yuri emulating Victor’s skating routine, Victor rushes over to the Japanese hot springs Yuri’s family owns. There, at the end of Episode One, Yuri encounters Victor naked, confident and poised to change Yuri’s skating career forever.

In between all of this, we meet another Russian figure skater, the dynamic and charged Yuri Plisetsky. At 15, he’s going through an angsty teenaged period. He swears that he’ll become the world’s best skater, besting both Victor and Yuri K. He hates Yuri K. for sharing his name. But more, he hates Yuri K. for stealing away Victor, who had promised to choreograph a skating routine for him if he came out on top of the junior circuit. Yuri K., nicknamed Yurio, busts in on Yuri and Victor’s training and demands a fair shot at Victor’s mentorship.

Victor places the two in competition by choreographing two opposing love-themed routines: An “eros” routine for Yuri and an “agape” routine for Yurio, which they perform in front of an audience. After winning Victor’s mentorship, Yuri goes on to perform “eros” a half dozen times throughout the 12-episode season.

Figure skating is a tricky choice for a sports anime. Typically, the hopes and fears of athletes are drawn out from their interactions with teammates and competitors. In the athletic sequences of basketball, ping pong and whatever Keijo is, we learn how athletes confront fear when they come face-to-face against a mortal enemy. We learn how they battle ego when pitted against a lesser talent who slyly steals the ball. On the field, other athletes are traditionally protagonists’ foils, making sports scenes dynamic, ever-changing and psychologically informative.

In Yuri on Ice, the rink accommodates one skater, and that skater performs the same routine four, five or six times until the final skating competition. Even peripheral characters repeat the same routine, to the same music, and often went through the same personal revelations for several episodes. When he’s in the spotlight, Swiss skater Chris is constantly comparing his career to Victor’s. Italian skater Michele is constantly yearning for his sister’s love, a little creepily. It is only in the show’s final moments when, for example, Canadian skater JJ’s one-toned narcissism falters in the Finals after some flubbed jumps. Not interactive, figure skating presents some issues as the subject of a character-forward sports anime.

Yuri’s two routines carried him through the show. They are good routines that continue to impress real-life professional skaters (on Twitter, many say YOI perfectly captures the sport’s spirit). But from a narrative standpoint, the repetition and isolation of figure skating made many of the actual skating sequences feel insipid over time (“the birth of a brand new Yuri”, again). The allure of watching Yuri’s emotional state change each time he performed was, for me, secondary to how bored I was of Yuri’s two routines.

Those routines’ repetitions make Yuri on Ice‘s gradual and marked decline in animation quality very apparent. Up to Episode Three, skating performances had well-articulated step sequences and graceful arm flourishes that were impossible to look away from. By the season’s halfway point, bodies grow unnaturally long in the span of a jump. Arms stretch into the distance and faces are rendered with little to no detail. Often, eyes barely move throughout entire monologues. A few times, like in the now-notorious Episode Four, jagged and stop-and-start animation mars skate sequences. Crunchyroll has nominated Yuri on Ice for its Anime Awards “Best Animation” category. Bad YOI Caps rose to this occasion:

Curiously, Yurio’s skating animations are stunning — especially when he shows off a new routine in Episode Nine. It’s fitting, since he eventually wins gold at the Grand Prix Final (and deserves it, in my opinion!). He’s also the most vocal of Yuri on Ice‘s three protagonists about his emotional heights and depths, which his liquid skate sequences and Howl’s Moving Castle hair reflected minutely. Yuri’s animation paled in comparison.

The occasionally poor animation quality of Yuri on Ice came as a surprise after director Sayo Yamamoto’s Michiko to Hatchin (2008), which follows a badarse Brazilian woman and a young, tamped-down worrywart who is allegedly her daughter. Michiko to Hatchin’s animation is dynamic. Michiko’s reactive face is how we experience the world around her. Yamamoto also directed Space Dandy‘s second episode, which I have used to get people into Space Dandy‘s absurdly high-quality animation. What happened with Yuri on Ice?

What carries the anime is the question of Victor and Yuri’s intimacy, which sometimes feels like the bait at the end of a long, 12-episode stick. At first, it is the dynamic of an idol and his cleric. Victor comes to understand Yuri at his low point. Yuri is overweight and self-hating and compulsively stuffing pork katsu into his mouth hole, a sad contrast to Victor’s lithe self-assurance. Victor’s confidence in Yuri appears less misplaced as Yuri is driven to perform for him. After jeopardising his career for Yuri, Victor becomes the focal point of Yuri’s world, and as Yuri’s determination and goodness shines through, Victor becomes more enraptured.

For most viewers, this is the true draw of the show. Victor and Yuri’s relationship is candid and unashamed, and marvellously, those around them happily supported it in its loving, queer ambiguity. Both from countries where same-sex marriage is not widely legal, the coach and student pair were sparkling reflections of how a queer romance could develop outside of cultural bias. 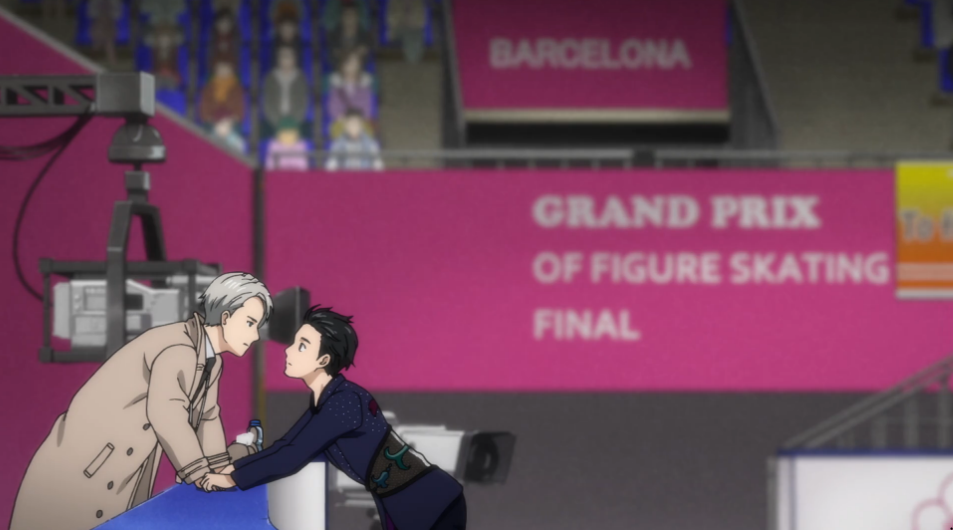 Yuri “confesses” to Victor on live television in Episode Five. It’s a mainstay of popular romance anime for a lover to corner their crush, say, at school, and “confess” their feelings in private. Here, Yuri talks through his sudden understanding of what love is in front of an audience. “I always felt like I was fighting alone. But since Victor showed up to be my coach, I’ve seen something totally different,” he says, as we return to shots of a naked Victor in the hot springs. “Victor is the first person I’ve ever wanted to hold on to,” he announces.

Fans of the show went crazy over Yuri’s apparent confession, which he concludes by promising to win the gold medal at the Grand Prix Final. Victor responds that Yuri’s necktie is unfashionable. In Episode Seven, an arm obscures what seems to be a kiss after Yuri’s energetic China Cup routine (a writer confirmed it was, in fact, a kiss — but the animation remains ambiguous). Fans felt vindicated, that Yuri on Ice is a defiant step forward in the face of superficial depictions of queer relationships in anime. Questions of “queerbaiting”, or dragging viewers along under unfulfilled promises of overt gay romance, were momentarily put to rest. Conversations around the show more focused on the wonderful theme of self-sacrifice and generosity, a wrenchingly good dynamic between Yuri and Victor.

From a huge studio, directed and written by two women, Yuri On Ice broke the mould of superficial or sex-only male-male relationships in anime. For several viewers, and especially queer ones, these moments were some of the most important in 2016 media. 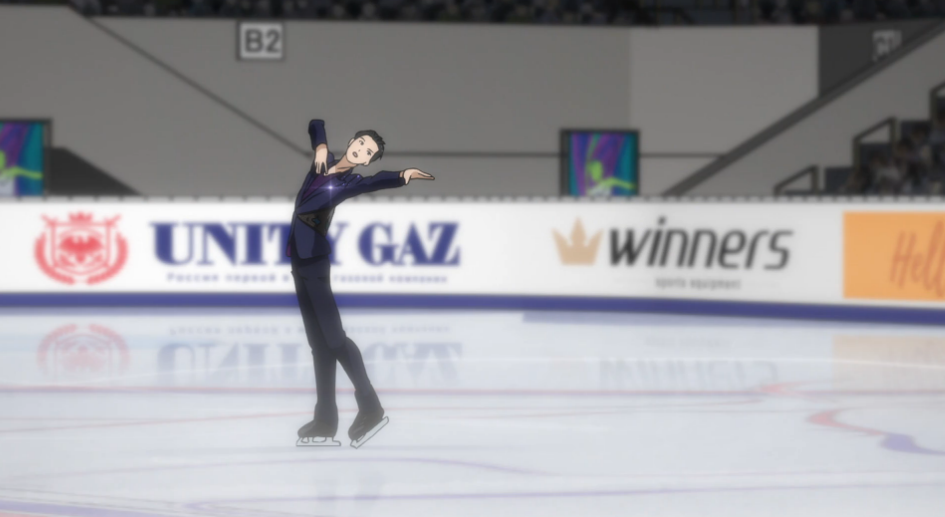 Here’s where things get thorny: By Episode 12, when Yuri just won silver, the two hug with a special sensuality, teasing a kiss. Yuri decides to continue skating after strongly considering retirement. Victor, thrilled, would keep coaching him — and promised to kiss the gold medal Yuri may earn in seasons to come (remember, he had also pledged to marry him then). A heart-wrenching Victor-Yuri duo skate sequence closes the finale as, in all likelihood, a kind of euphemism. Cue a probable Season Two. Were fans expecting a passionate kiss? A sex scene on par with the raunchiness Victor displayed in the hot springs (which the anime cuts back to several times throughout)? These moments of ambiguous engagements and arm-obscuring kisses were “landmark”, “watershed occasions”. “Shippers” felt that Victuri was canon and not a conspiracy because they received confirmation of something physical, the traditional benchmark.

And yet, I am sceptical. Several of Yuri on Ice‘s spring 2016 kin, uncannily, also feature teasingly queer relationships: Kiss Him, Not Me, Keijo, Flip Flappers, Izetta, Magical Girl Raising Project and others treated viewers with gay undertones — and that’s just for the spring. In Flip Flappers, the two female protagonists conclude a battle wearing wedding gear and holding hands. I cannot say with confidence that all of these queer relationships are intended to warm the hearts of LGBTQ viewers and contribute to a growing corpus of progressive anime. Yuri on Ice was simulcast in Japan and on Crunchyroll, betraying studio MAPPA’s confidence that Western viewers are compelled by queer content. Clearly, on-the-border queer relationships generate hype.

Yuri on Ice‘s queerness is less subtextual, and is handled with a great deal more grace, but I do wonder why Victor’s arm blocked his kiss with Yuri in the first place. Twitter exploded with questions. Japanese anime has broadcasted gay kisses before: Two of sci-fi anime Shin Sekai Yori‘s male protagonists kissed with tongue. It was an organic, loving kiss anticipated by no fanfare.

Yuri on Ice‘s use of “will-they-or-won’t-they?” teases of physical intimacy aren’t necessarily bad, but the debate over their meaning does dominate the fandom. Yuri on Ice‘s sexual arc is a crucial plot-mover, not necessarily a gimmick. But the couple’s waxing and waning power dynamics and heights of personal growth could stand on their own as the centrepieces of this anime. Instead, they were often relegated to flashbacks scattered throughout the later episodes.

It is a special anime for viewers — one that, with depth and grace, satisfies hopes for a mainstream, gay romance in media. In 2017, hopefully a better anime will do the same.