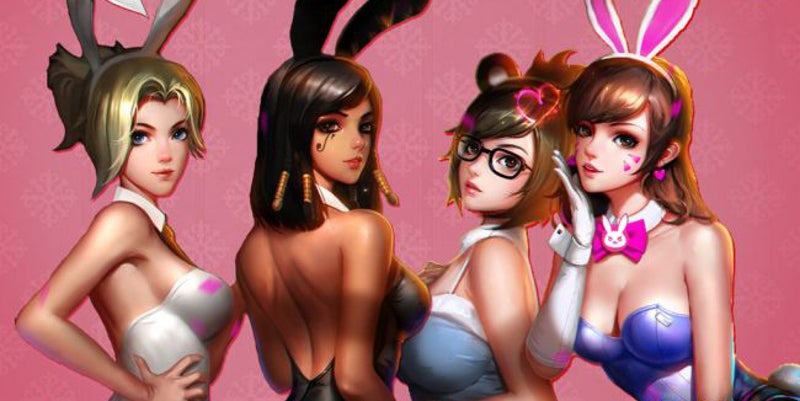 Playwatch Magazine began as nothing but a series of Playboy-style covers featuring Overwatch characters, created by an artist named Manusogi. Then a site called Overpog.com ran with the idea and started pairing covers and art with articles. Some were in-universe (like interviews with Bastion and D.Va) while others highlighted fan content. There were also a lot of near-nude Overwatch characters, because of course there were.

All told, it was a pretty clever enterprise, albeit one that wasn't exactly family-friendly. Now they have received a copyright notice from a digital copyright agency representing Blizzard, which means the project is six feet under until further notice. "We have received a notification from a digital copyright protection agency that claims Playwatch Magazine infringes Blizzard's intellectual property rights," reads a message on Playwatch's website (via PC Gamer). "For that reason, we have contacted Blizzard directly and decided to close the website until we have an answer from them."

Some have speculated that Playwatch's Patreon is the reason Blizzard's law squad decided to crack down, but it wasn't exactly making bank. Still, it isn't generally a good idea to try to make money off somebody else's characters and IP, even if you are putting your own spin on them, and especially if you're taking their clothes off.

This may or may not be over, but in the meantime, Playwatch's staff is looking on the bright side.

"We started several months ago with the goal of bringing Overwatch fans a new way of enjoying the game and creating a place where artists and writers could share their work with the rest of the community," they wrote. "The entire Playwatch Team is extremely grateful for your support. It has been a privilege getting to know you all, and we will keep you updated with any news we have."