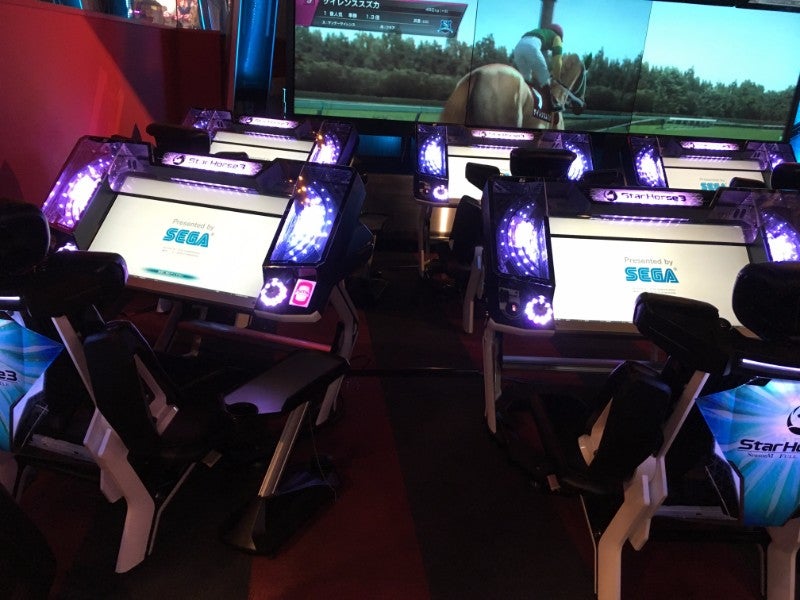 It's 10:15AM on a Wednesday, and I'm at Club Sega in the middle of Osaka, registering to get an Aime card, Sega's IC chipped card that stores data for Aime-card compatible games such as mahjong title M75, Project Diva Arcade and StarBeat. These games are cool and all, but what I'm here to play is horse-racing sim StarHorse 3.

Technically, you could blow through a thousand bucks or more on any one of these Sega games, with all your money — in the form of digital medals — stored on your IC card. I'm sure someone, somewhere is doing just that. But something tells me that betting on horse races is the best way to lose all your money the fastest.

StarHorse was first released back in 2000. Sega is now on its third iteration, which debuted in 2011. This is Season VI, which rolled out in arcades just last month. In StarHorse, you watch horse races, bet on them, train jockeys, and raise a stable of winning steeds. The character models are the same as the 2011 ones, so they're starting to show their age. But Sega hasn't been in a hurry for a major overhaul, because these games make money no matter how they look. 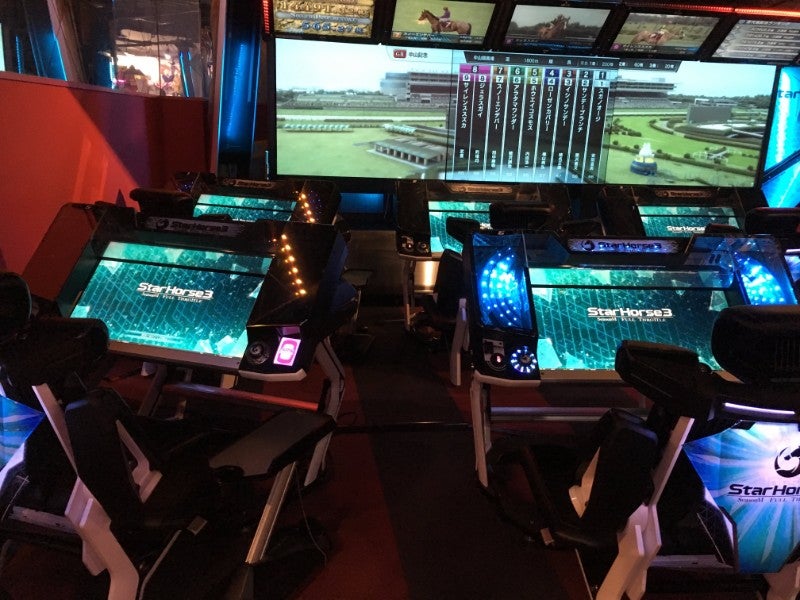 Medal games such as StarHorse don't get as much attention outside Japan as fighting games or music games. While they're a form of gambling, with players trying to win medals, these types of games are also an integral part of any Japanese arcade. They're often in back, or sometimes on the upper floors. They're often intimidating because there's a higher entry barrier — in the case of StarHorse, they require a knowledge of horse racing. I've never bet on a real horse race in my entire life, for example, so everything at first looked unfamiliar.

After I sign up for Aime, I press my index finger on a scanner four times to make sure there's a good digital copy. I'll need this when I want to convert money into digital medals on my card. Next to the machine where I'm essentially buying e-medals for my card is a medal bank. These have been around for years (well, so has StarHorse), and players can deposit their medals in them. 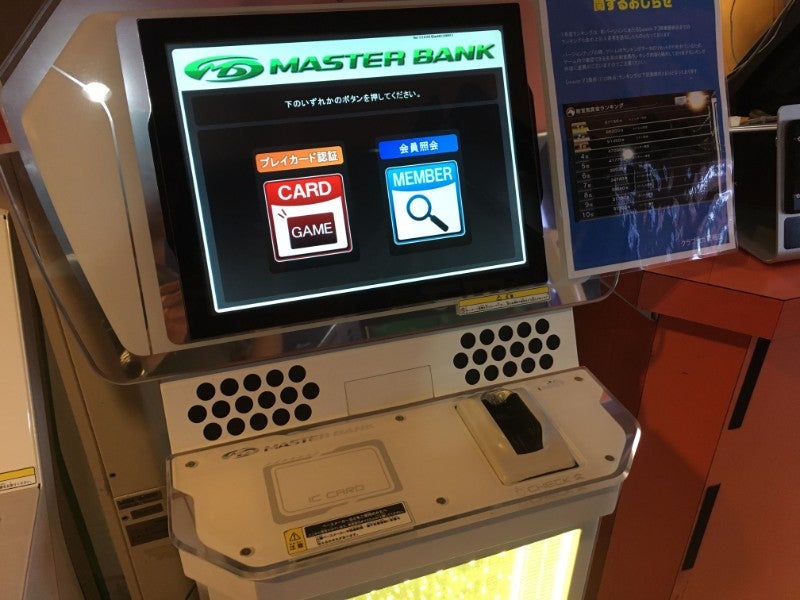 They're like an ATM for medals, basically, which is important for high-rollers with large numbers of medals on their cards. If you don't deposit your thousands of dollars worth of medals and then lose your card, you're shit outta luck. In the past, players would dump physical medals in their medal bank account. These days, the medals are often digital, because big spenders can buy millions of them in one bundle.

"That sure is an underhanded sales trick," I say.

She laughs and nods, agreeing.

I put ¥1000, about $11, on my Aime card and sit down at one of StarHorse 3's large seats, which has a huge flatscreen like an architect's table. 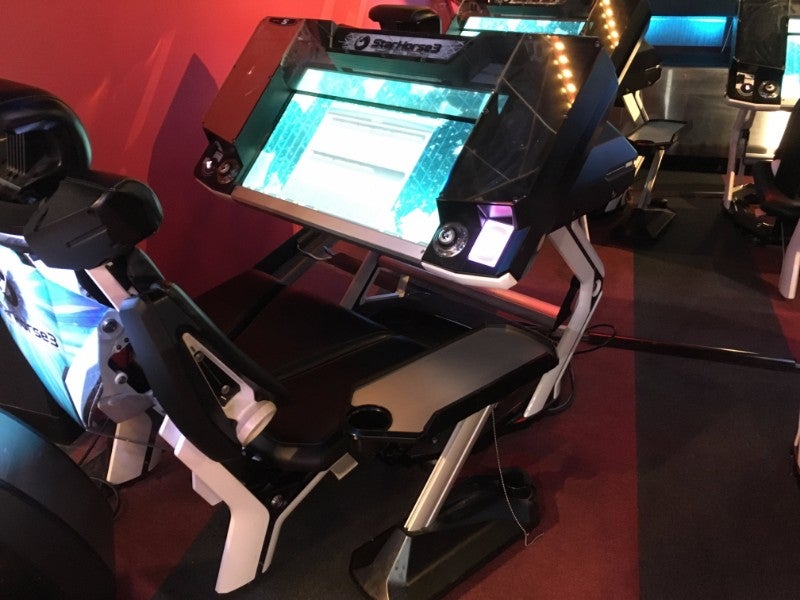 Moments earlier, I had tried to strike up a conversation with the only other StarHorse 3 player in the arcade, a dude with an earbud in one ear and a sickness mask over his face. Decked out in a red T-shirt and comfortable shorts, he looks like he's in his mid-30s and certainly not dressed for corporate Japanese work.

"I need to get an Aime card first, right?"

He nodded, now opening up the Casino game window with his right index finger.

He nodded, doing his best to ignore me. His iPhone was plugged into the outlet next to his personal StarHorse 3 flatscreen, and during all of this, he was watching a movie on the phone, though I couldn't tell which one. He didn't seem starved of sensory stimulation, but with his facial mask and earbud, he was shutting himself off to superfluous stimulation (read: Me) and was preoccupied and focused on his game. I was getting in his way, so I quietly slipped off. 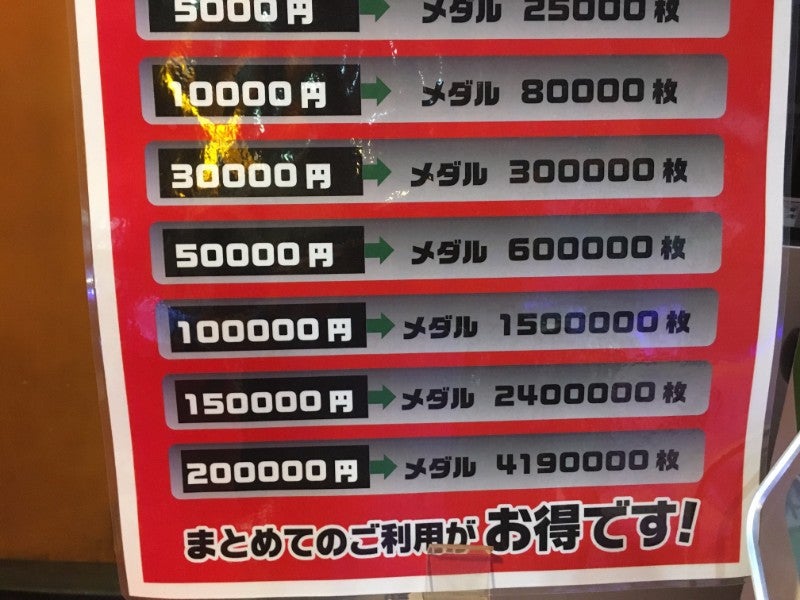 You can use mobile phones that are enabled with Osaifu Keitai, the digital money system that Japan has been using long before Apple Pay was ever a thing.

"It's happened," the staffer replies, seeming more than happy to field my questions. Customer service in Japan is generally good, and this Club Sega in Osaka is no exception. 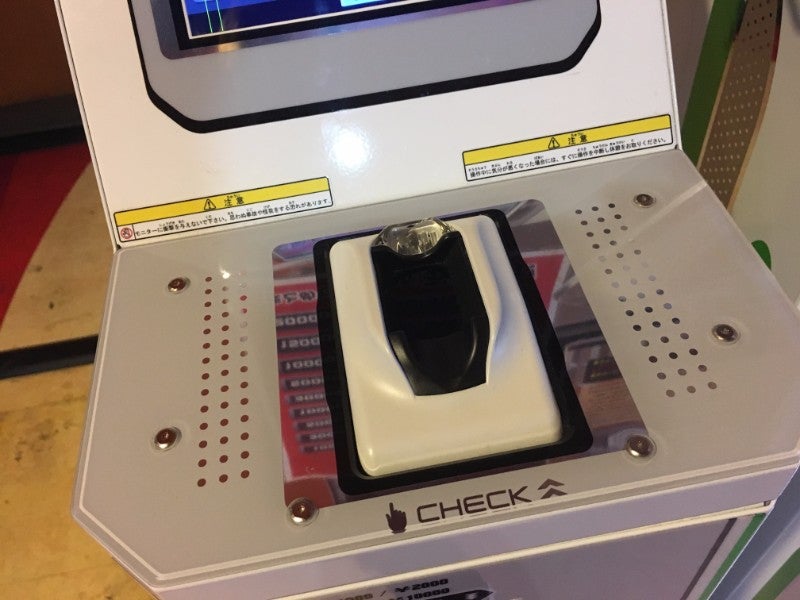 Players must scan in their fingerprints to put money on their Aime card. [Photo: Kotaku]

I scan the StarHorse 3 seats. There is only that one dude, so getting a seat will be easy. "Is it usually like this? Or does it get more crowded?"

"It gets more crowded during the day, and it's harder to get a seat on the weekends." 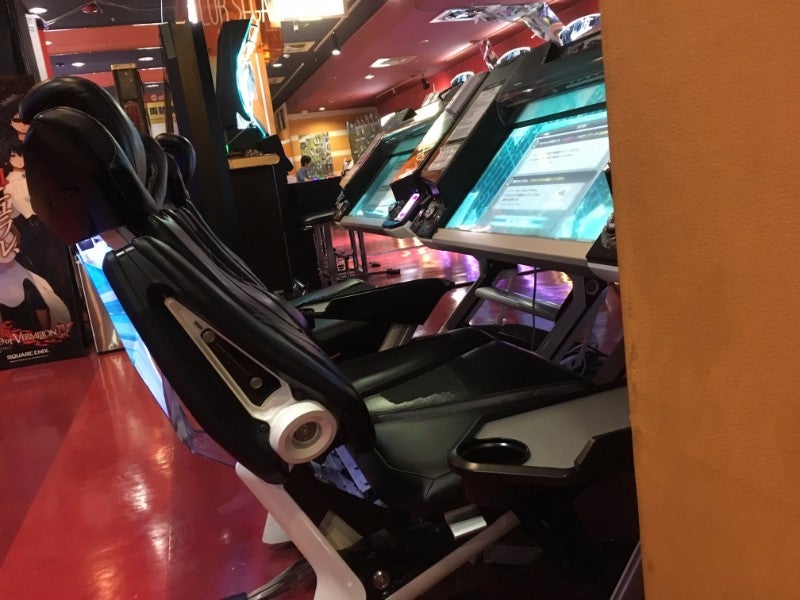 The seat I choose is worn down. It's built for two — for friends and couples who want to play together. But I don't have any StarHorse friends, so sitting in it solo feels extra lonely. After adjusting the angle of the flatscreen, I create my handle, customise my jockey, and start feeding my horse lettuce. Good thing I have a digital animal pal.

At first glance, the setup is daunting. The screen is divided into two. On the right are my horse and my jockey, or the "Owner Game". I create a handle for myself and get a jockey, giving her a name and customising her race uniform colours. 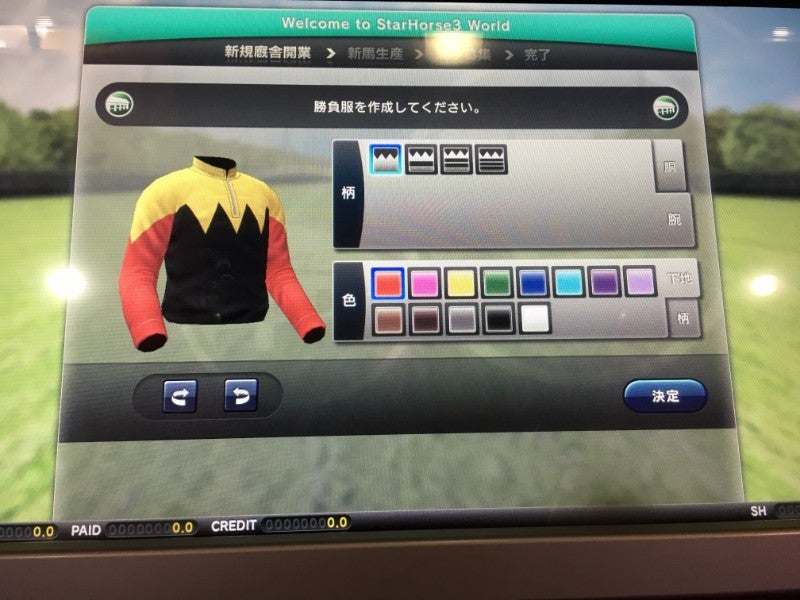 With a subtle nod to Charlie Brown. [Photo: Kotaku]

On the left are the listings for the races on the big monitors, which I can watch on a cluster of large flatscreens or in a small window at the top of my display. It's a lot to digest at once. 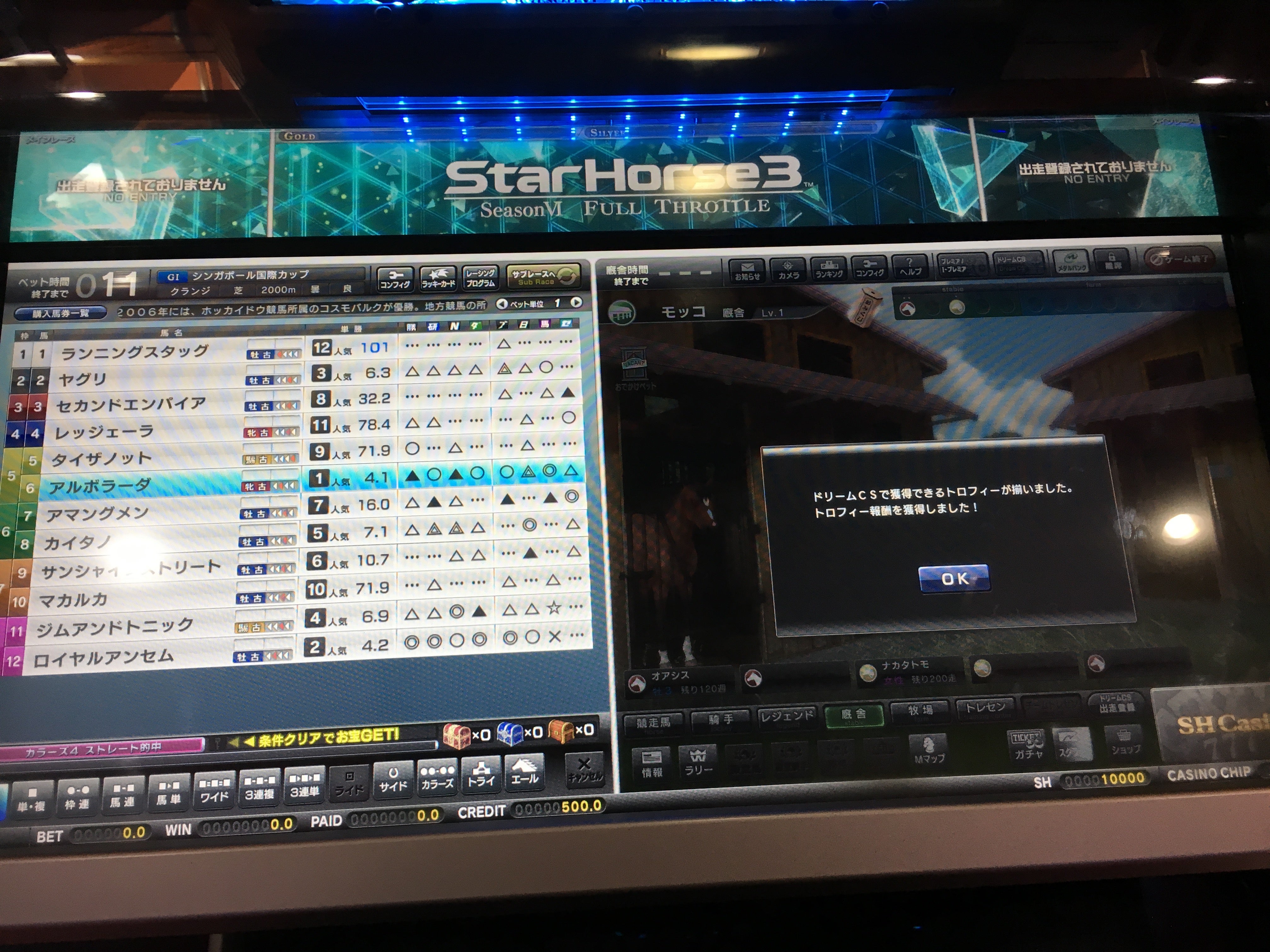 While I have my jockey jog, lift weights, or watch other horse races in order to level her up, I use the other side to check the odds and bet on virtual races. 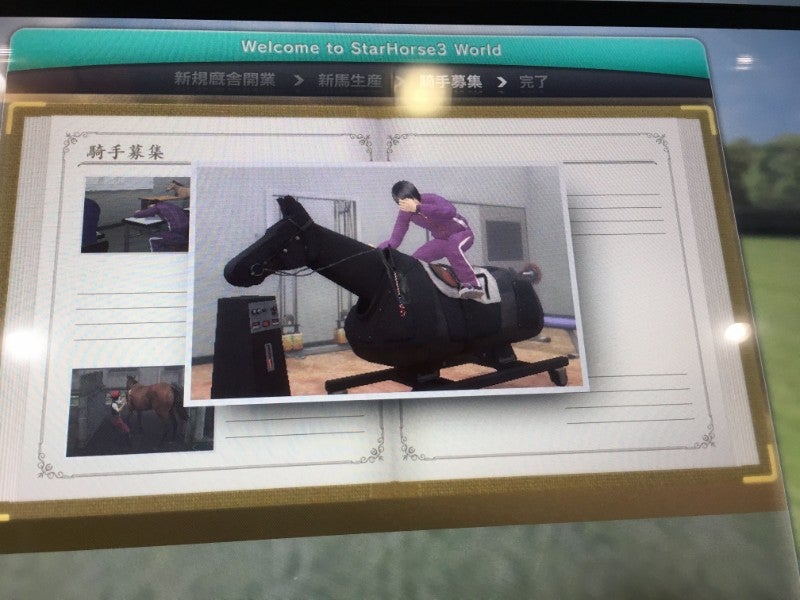 This is the sequence when I first get my jockey. Later, you can also pay medals to train your jockey on this mechanic horse. [Photo: Kotaku]

Between betting, watching digital horse run across multiple screens , and keeping on top of managing my jockey and horse, StarHorse 3 is a busy gaming experience. 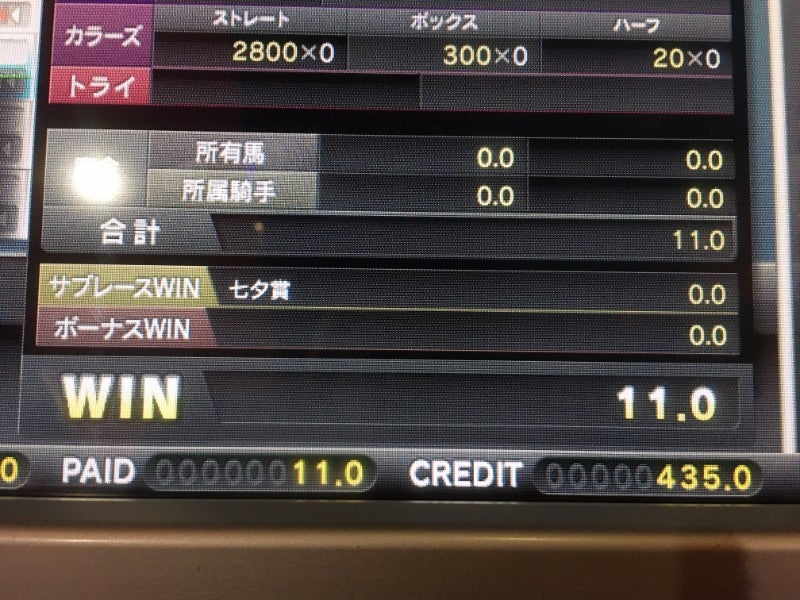 I only put a few medals on horses with good odds at winning. I don't bet a lot, but I do win a few. There are also casino mini games such as poker or slots that can keep you busy and which you can open up in a separate window, but I've never been that interested in gambling. Instead, I wonder if I should really be giving my horse an energy drink. 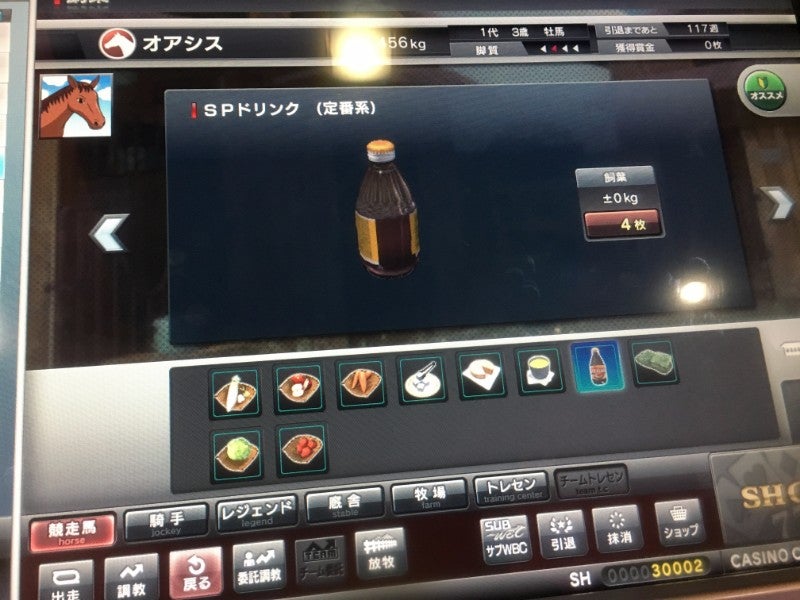 I get up and go over to the guy in the mask. "Excuse me, do you have any advice on how to level up?" He pauses, takes his earbud out, and says, "You should make more horses and have them race." He seems polite enough; I'd probably react the same way if some random started asking me questions in an arcade. I thank him and walk back to my seat on the other side of the StarHorse 3 set up. 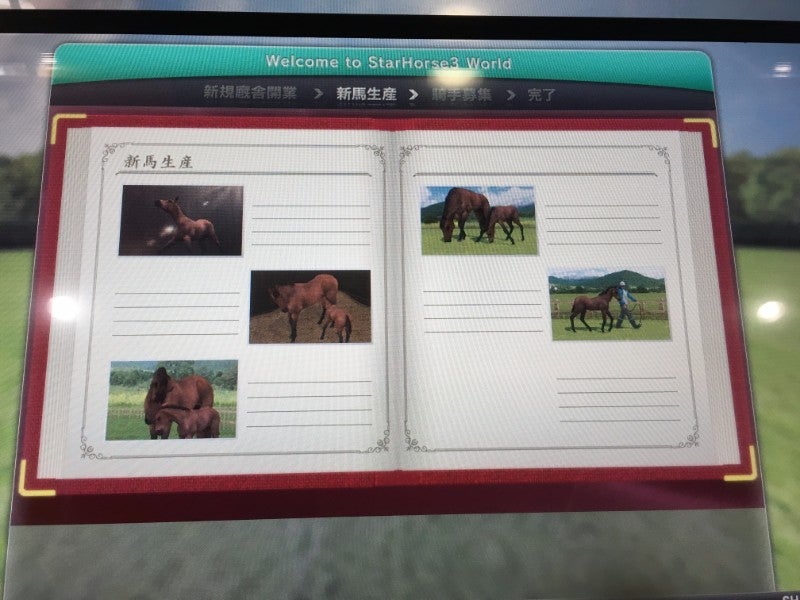 They grow up before you know it! [Photo: Kotaku]

My first horse has been put out to stud (I'm not sure if it's just part of the game or if I did it by accident), so I get a mate and make a new horse. Every action, whether you're mating a horse or buying a bunch of apples, costs medals. Betting also eats them up, so you have to make sure every choice you make is a good one. No wonder that guy didn't have time for my shit.

"Hey!" says a businessman-type in a white dress shirt and slacks. I didn't notice him come in, but he's not talking to me — he's talking to the guy in the sickness mask. They make friendly chitchat for a few minutes like they know each other from hanging around this arcade before the businessman goes and sits down nearby. It seems like this is a regular thing for both of them. I realise that maybe they aren't unfriendly, it's just that I'm the new guy on the scene. Ungh.

I breed a few more horses, and with each birth, I see the foal grow up in a matter of seconds. Now that I have an expanded stable, I start training them, paying out the necessary medals and having them run on different kinds of tracks so they will be ready for any kind of race. I enter one of my horses in a subrace, which is like the undercard at a boxing match. You can place bets on horses, including your own, so I put my digital medals where my mouth is and settle in to let my digital horse do its thing. 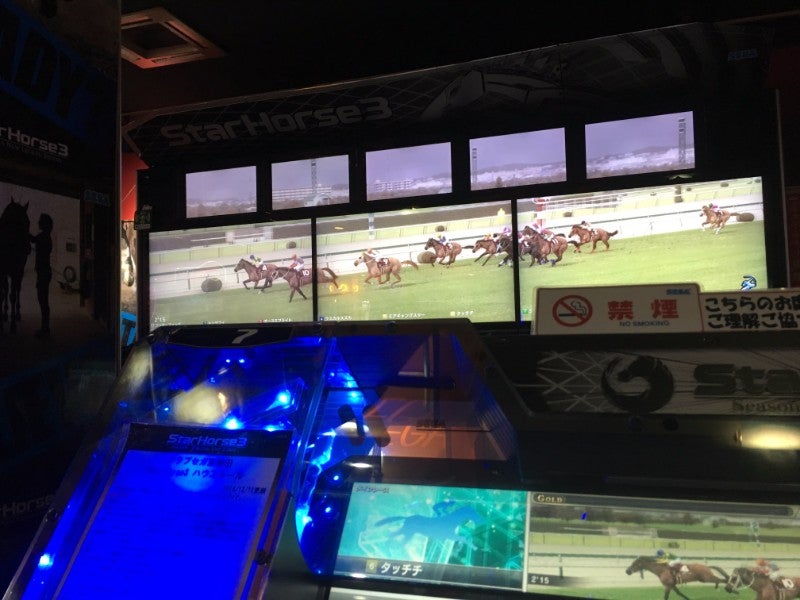 There are so many screens to watch while playing. [Photo: Kotaku]

I finish fourth, which is good. In the second race, I come in sixth, which isn't so good. I train my horses some more, and then I enter them in main races, or the main event races. I'm still losing, and losing money, but in the last race, the lights around my command centre start flashing green. I wonder if I should add more money to my card, or if I should ask the other people here for advice. I look over at them and they're pretty much all pressing things on their displays, with earbuds in their ears and holding their smartphones in their free hands. They're occupied, so nah. I've bothered them enough. 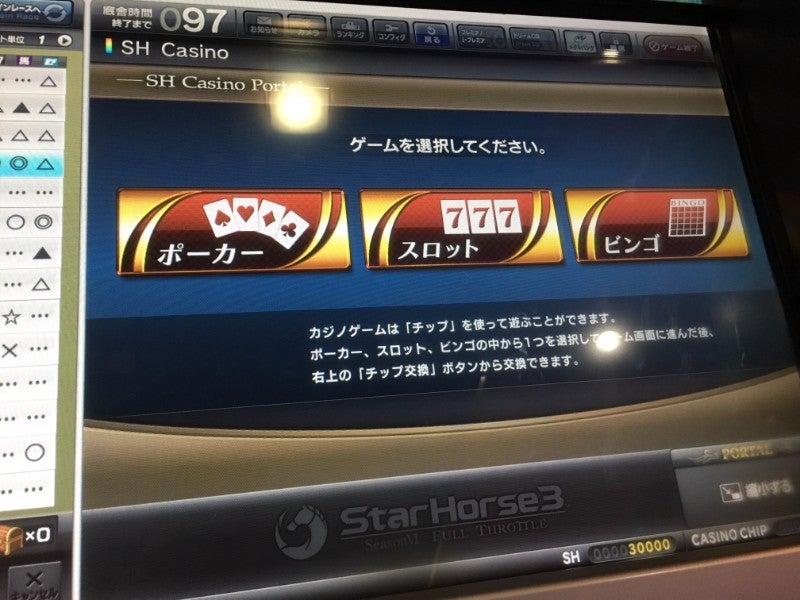 With StarHorse 3, there's always something going on. There's always money to bet, horses to raise, and races to watch. As all this unfolds, a small timer lurks in the upper left corner, counting down the seconds until the next race starts and when your bets are due. It isn't necessarily relaxing, but I start zoning out like I do when I play shoot 'em up arcade games. My eyes glaze slightly, and I start getting into a groove. Sadly, here, it's a losing one, but I'm beginning to see why someone who's into horse racing would want to play StarHorse at 10AM on a Wednesday.

I check my watch. I can't believe it's already noon. More businessmen are filing into Club Sega, possibly on a work break, taking seats at StarHorse and putting their briefcases on the seat next to them. I've just entered my horses in more races and can't stop my game until they're done. Lunch, it seems, will have to wait. 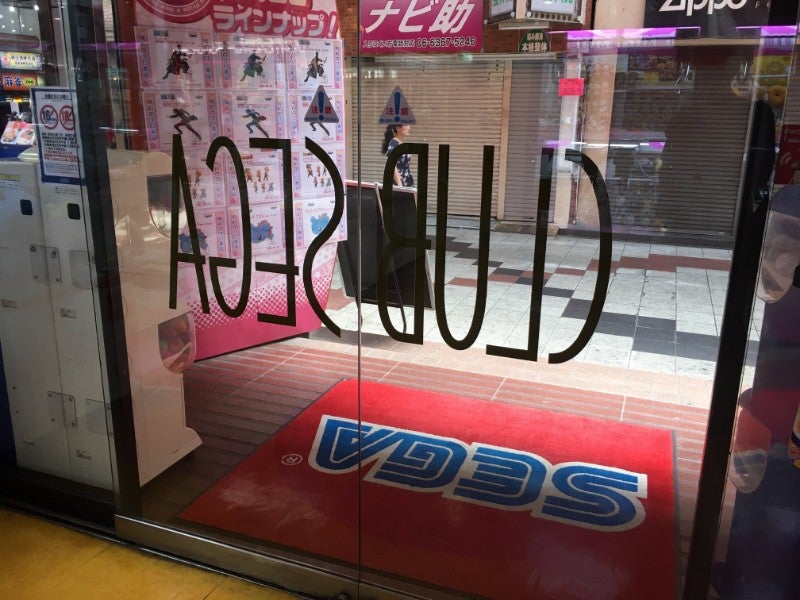