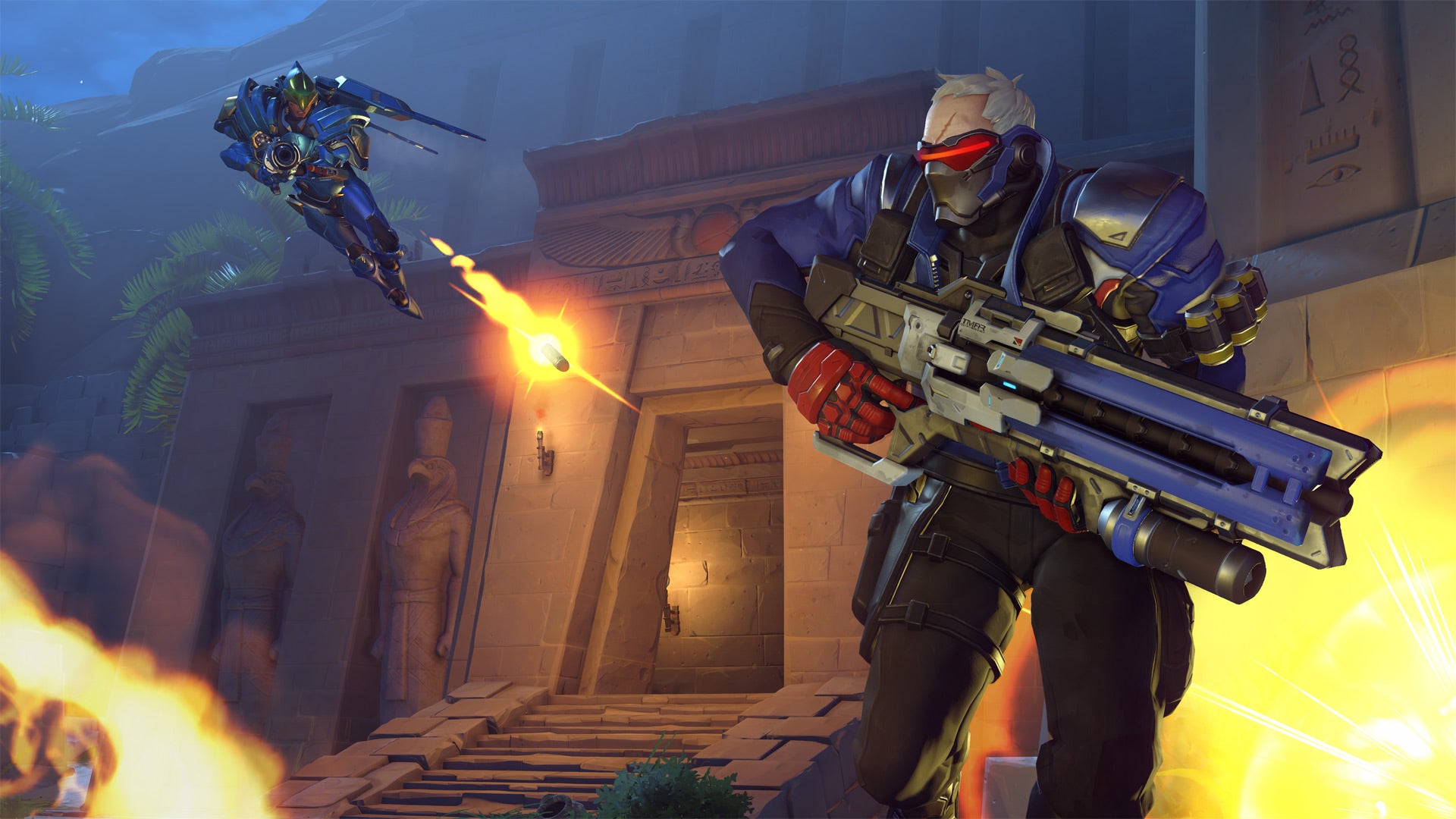 Down in the cavernous cellars of Château Guillard, it’s just me — playing as Mei — and an enemy Soldier 76. I freeze him, but at the last second he throws down an HP-restoring biotic field, negating much of my hard work. I freeze myself to heal, as well. Then, with our safety nets gone, we dart, dodge, and fire, narrowly missing each others’ heads.

It’s tense, intimate. In real life, I’m leaning in so close to my screen that my forehead is practically touching it. He misses, I miss. He hits, I hit. We’re both on our last legs. Finally, I’m able to freeze him again. I begin pre-savouring my hard-earned kill. Then some fucking McCree swoops in and steals it, getting full credit for all my work.

That anecdote, in a nutshell, is everything great and terrible about Overwatch‘s new free-for-all deathmatch mode, which along with a team-based variant is currently playable on the game’s PC public test realm.

If regular Overwatch matches are fast-paced, then deathmatch is downright blistering. Levels are small, and you respawn only a couple seconds after you die. The action never stops. There aren’t any lengthy marches back from your spawn point or brief breathers when you’ve successfully wiped out the enemy team. On top of that, every kill counts, and as a result, so does every death, since it directly benefits your opponents and takes away from time you could spend killing.

Yes, this is Deathmatch 101, but if you’re somebody who’s come to shooters by way of Overwatch, it’s a pretty radical change. 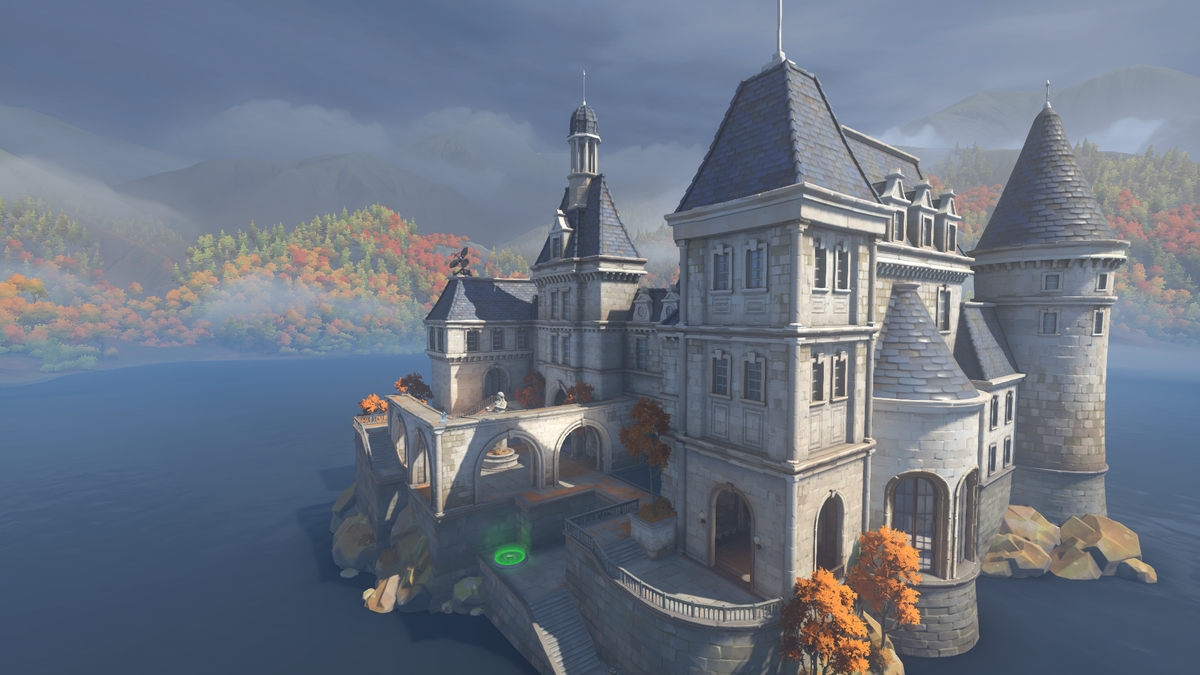 In many ways, it’s a good one. Confined 1v1s, 2v1s, 1v1v1s, and so on — infused with Overwatch‘s vast arsenal of game-changing powers — lead to all sorts of tense, unpredictable moments like the one I described above, and team deathmatch games feel like somebody’s tossed Overwatch into a pressure cooker. You just fight and fight and fight until one team slumps over, weary and, you know, dead, and the other breathes a sigh of relief that they narrowly claimed victory.

But Overwatch was not originally built with these modes in mind, and it shows. As I discovered the hard way, it’s very easy to have kills stolen from you in free-for-all matches. You can do 90 per cent of the damage, but whoever gets the last shot receives full credit for the kill while you get none. That’s frustrating in other games, but immensely so in a game where some characters are hyper-survivable, and you’ve really gotta work to make that Roadhog squeal for mercy, or force that dang Tracer to lay off the friggin’ caffeine.

On one hand, Overwatch‘s deathmatch stands out in part because you’ve gotta put in more effort to get kills, which leads to extremely memorable encounters (as well as the occasional burst of “oh god why is everybody dying” chaos).

But it’s a double-edged sword. I’ve had games where I’ve gotten off to a good start, climbed into a comfortable lead, and then watched it all slip away not because I suddenly started playing poorly, but because my kills kept getting stolen. That’s the worst kind of bullshit, the kind that makes me wonder why I’m even trying.

There are other issues, as well. Balance, not surprisingly, is a big one. Some characters simply aren’t viable, especially in deathmatch’s free-for-all variant. For example, supports like Lucio and Mercy are much appreciated in regular Overwatch matches and team deathmatch, but in free-for-all, good luck being anything more than kill count padding for high-offence characters like Pharah, high-defence characters like Roadhog, and well-rounded characters like Soldier 76. (Those aforementioned heroes, by the way, all happen to have abilities that are just great for kill-stealing, which is a major part of why they’re so effective.)

Perhaps in the future, Blizzard could roll out alternate, deathmatch-specific kits for some characters, because right now they’re stuck at the bottom of the food chain. 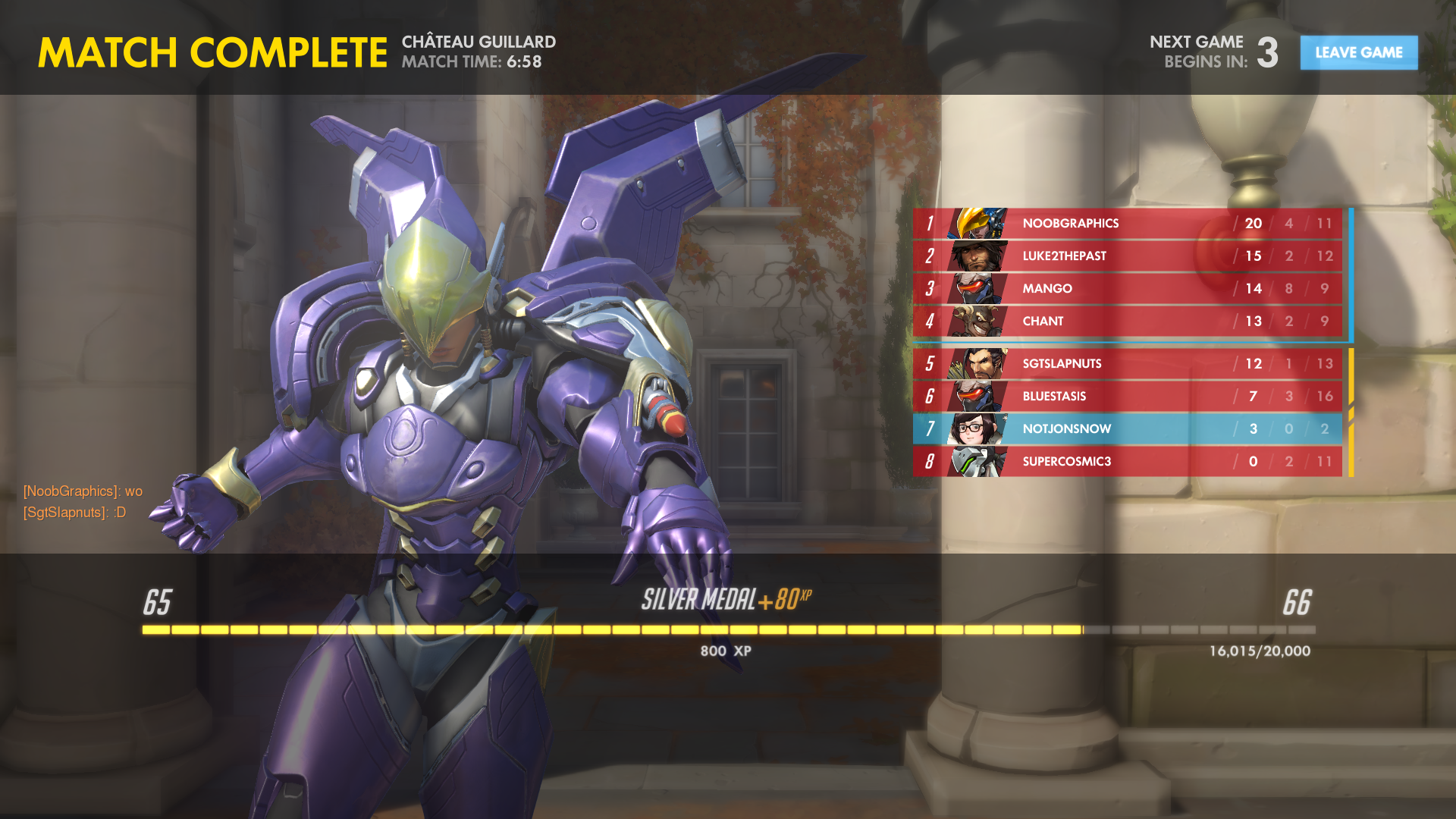 Then there are minor annoyances, like the fact that you’re sometimes forced to backfill into an already in-progress free-for-all match. That makes sense for team-based modes, where you’re not the only one responsible for your score, but try dropping into a game where some Pharah’s already soaring above the pack with 15 kills, and you’ve got a big, fat zero, a deficit you simply don’t have time to make up for. Again, why even try?

When everything’s whirring along at a gatling gun clip, both free-for-all and team deathmatch can be super fun, the latter more consistently so. The new level, Château Guillard, a multilayered maze of macabre sights and sounds, can be great fun, too. As of now, though, it all feels a little half-cooked, less like Blizzard stirred Overwatch and deathmatch into a scrumptious stew, and more like it tossed some choice cuts of meat into a bucket of warm water and hoped the whole thing would sort itself out.

That makes sense, to a degree; after all, deathmatch is only playable in Overwatch‘s Arcade area, aka the game’s “fuck it, let’s just have fun” section. I get the impression that Blizzard’s still experimenting right now. But with issues actively interfering with fun on a semi-regular basis, I can’t help but feel like the mode isn’t quite ready for primetime yet. Here’s hoping Blizzard keeps deathmatch on the PTR until it’s ironed out some of the more frustrating kinks.