Lin-Manuel Miranda, A Saga Musical Is In Your Court, Make It Happen 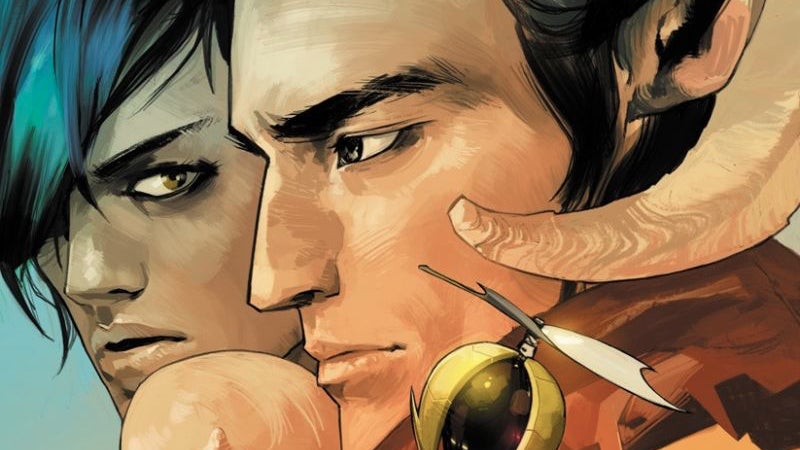 The creators of Image Comics' Saga say there are no plans to make a movie or TV show based on their iconic series, despite fan demand and Thor: Ragnarok actor Tessa Thompson's desire to be its star. In fact, there are no plans for any kind of adaptation - unless, of course, Lin-Manuel Miranda wants to put it into song.

Writer Brian K. Vaughan and artist Fiona Staples chatted with Vulture about the next issue of Saga, which they say will cover "fake news and genuine terror". Considering comic adaptations are all the rage these days, the conversation soon turned to whether the pair would be interested in having their space opera turned into a film. Vaughan previously said he and Staples conceived Saga to be an unadaptable comic book but has since opined that they're open to a possible adaptation. However, it isn't a priority.

Unless, of course, you're talking about a musical created by the Hamilton virtuoso. Vulture asked the pair about that time Manuel mentioned Saga during an interview in the New York Times, where he called it "an incredible world in which to get lost". This immediately perked up the creators' ears and caused them to change their tune. I don't blame them.

Vaughan: Yeah, I love that column about creators and books in the Times, so I was reading it myself when I saw that epic Saga shout-out. We've never spoken with Mr. Miranda, but seeing Hamilton on stage was one of the greatest experiences of my artistic life, and it's a ridiculous honor to know he reads our work. I know I said we're not pursuing adaptations, but if Lin-Manuel ever wants to mount a Saga musical, it's all his, wouldn't you say, Fiona?

Honestly, this is all I want in the world now. Comic books, fantasy, and sci-fi have had a hard go on Broadway, and it's about time they had their day on stage. Back in the day, we had shows such as Little Shop of Horrors and The Rocky Horror Show, but the only one we've gotten recently (apart from The Cursed Child, which isn't a musical), is Spider-Man: Turn Off The Dark, which was an utter disaster. There were rumours for years that we'd get a Back to the Future musical, but the Flux Capacitor might be shut off for good in that case.

Saga would be really hard to produce, a bold experiment in storytelling and visuals that would test the limits of what musical theatre can do. That's why I think it should happen. No lying. And if anyone could handle such a feat, it would be Lin-Manuel Miranda. It's up to you, buddy. Don't throw away this shot.