Northgard is a different kind of strategy game. It is about map control, sure and there are resources to be gathered and enemies to defeat. In many ways, though, its unique combination of mechanics and concerns generates a fresh context for those actions.

I'm a slow strategy game player. I'm not a fast learner when it comes to the overlapping ways that different systems of strategy games run into each other, and so I have to take my time. I blocked out some time earlier this past week to try out Northgard, which finally emerged from Steam Early Access on March 7th, because I knew that it would take me a few hours to really nail down how to interact with it.

That wasn't the case. Northgard makes itself accessible, and even though I've only been playing through the campaign, I've gotten a strong sense of what the game is all about and what it's concerns are. 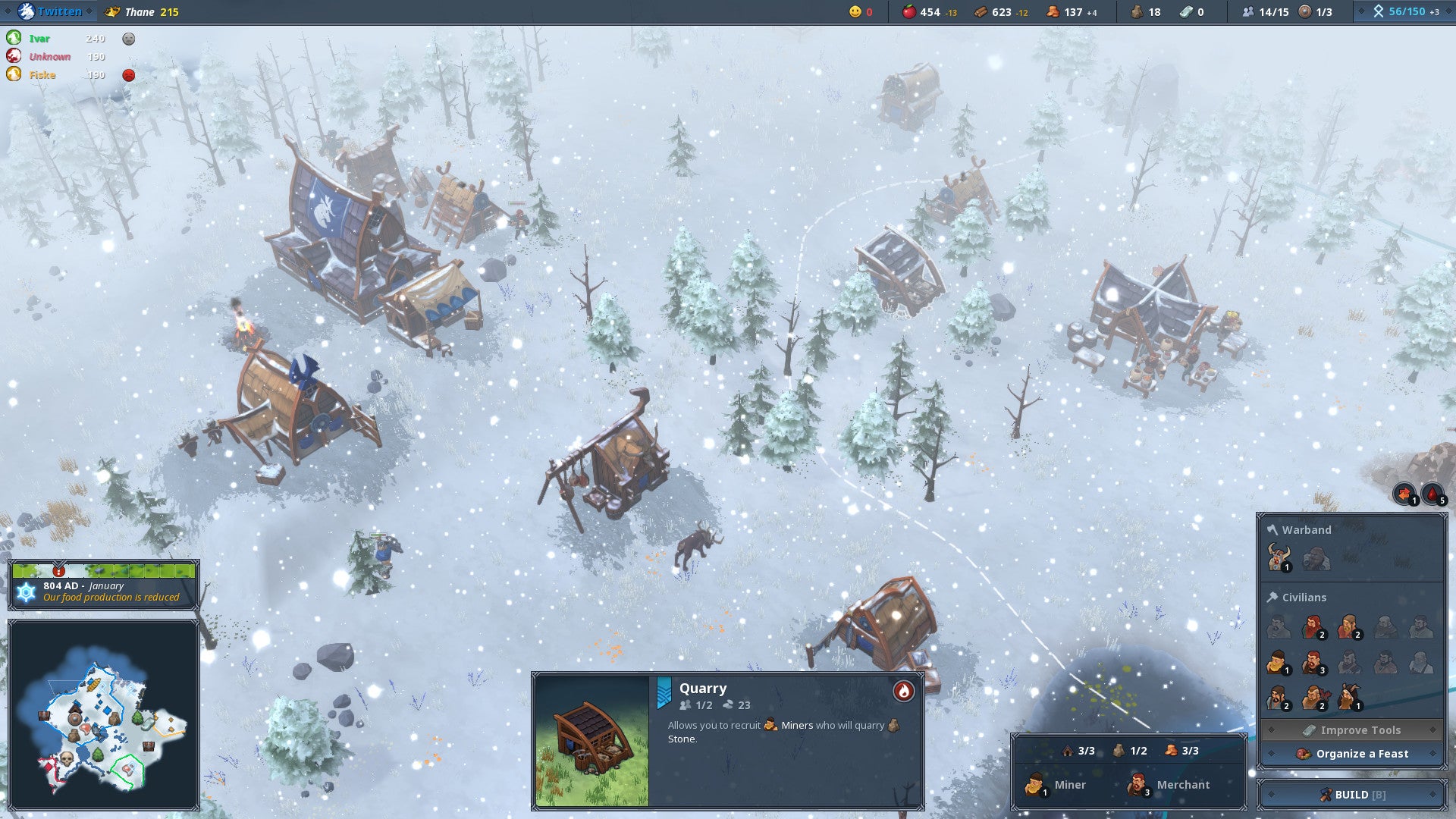 [insert your own winter is coming joke here]Screenshot: Shiro Games

First, there's winter. I have a very special soft spot in my heart for how winter works in strategy games. One of my favourite games of all time is 2014's Banished, which puts you in control of a little medieval village. Brilliantly, Banished isn't all about bombast. There are no natural disasters and no giant monsters to smash up your little zone.

Instead, it is a game that asks very little of you: you need to gather food, and you need to survive through the winter. In Banished, this cycle determines every action you take.

Northgard has picked up this banner and run with it. It is also centered around preparing for winter, and as a player you have to be very aware of what part of the year you are in at all times. During summer, your woodcutters need to be gathering as much firewood as possible. Your farmers will produce more food, and you need to store it up.

Stockpiling items is relatively simple, but the real brilliance of what the game demands of you as a player comes from how that stockpiling impulse exists in tension with the other parts of the game.

While Northgard happens in real time, and therefore that yearly calendar is always ticking by, it also has some elements of a tile-based game. You can only build so many structures, like hunting cabins or houses for your villagers, on each time, which encourages you to expand. Taking over new tiles costs food (this is called "colonization"). Immediately you can probably intuit how all of these supply demands are in tension with each other.

Expand at the wrong moment and you starve during the winter. Fail to expand enough and your base won't be able to grow. 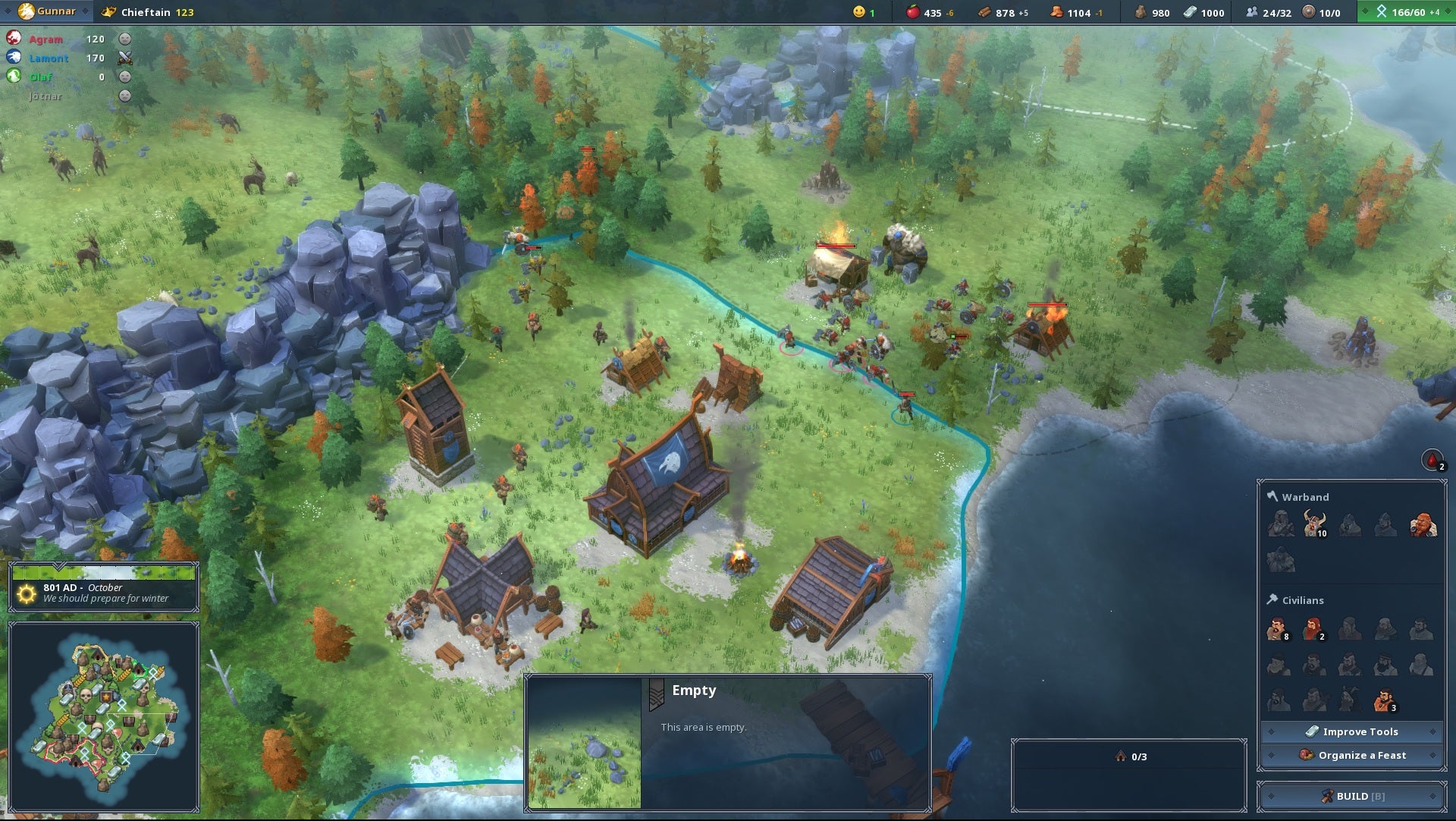 They're doing a fight.Screenshot: Shiro Games

That's the final element to the Northgard puzzle. There are other factions on any given map, and they are in competition with you. While the campaign is mostly centered around doing limited tasks like managing your economy or gathering enough lore (think culture points in the more recent Civilisation games), there have been moments where I've had to raise an army and tactically take over enemy tiles.

It's a difficult, strategic process, and I look forward to putting some time into the multiplayer of the game to see how it feels to put this pressure on other human players instead of the bots that I've been interacting with.

Northgard is an excellent game for chilling out for a few hours and just getting into the flow of things. There's never a moment where you don't know what you should be working on next, and I'm continually pleased with the small choices that I make about, say, worker placement, that pay off later in a big surplus of supplies. I'm definitely going to be digging in deeper over the next couple weeks.