The Power Rangers Comic’s Big New Event Is Off To A Bloody, Crazy Start 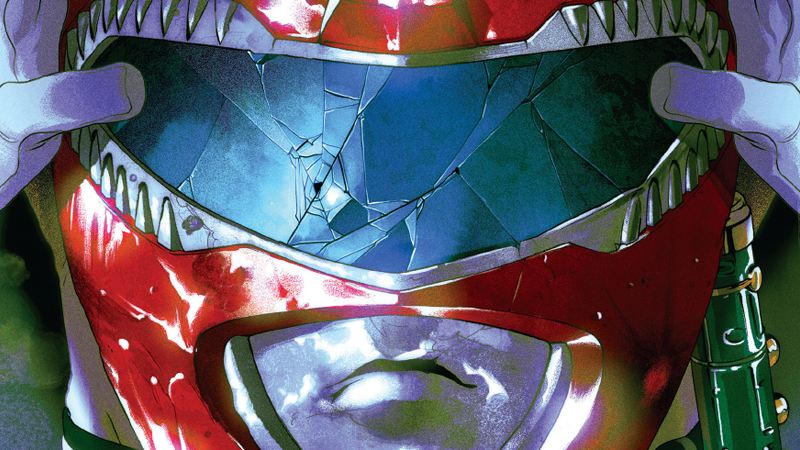 Boom Studio’s first major event for its Power Rangers comic, Shattered Grid, has been promising to unite 25 years worth of Ranger teams into one big adventure. That said, it seems not every Ranger team will be making it to that team-up in one piece. Or many pieces, really.

The cover art for Power Rangers #25, which is a bit of a red (ranger) herring.Image: Goñi Montes (Boom Studios)

Instead of opening with the series’ ongoing troubles with the alt-reality evil Tommy Oliver known as Lord Drakkon (it’s a long story, but basically, “evil Tommy from another world where he murdered the Rangers and became an arsehole dictator” is what you need to know), Shattered Grid opens with a whole other problem facing another Power Rangers team. 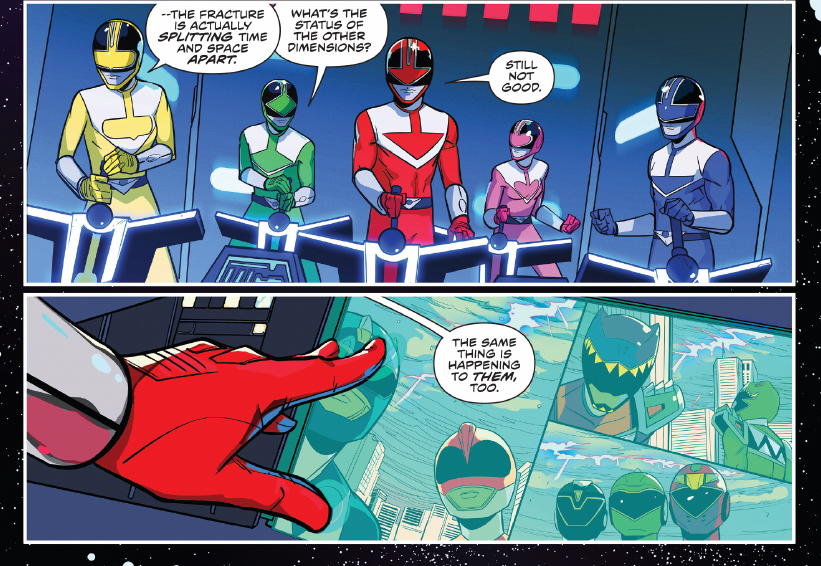 Time and space are starting to rip themselves apart, as the Time Force Rangers have noticed (and so have several other Ranger teams, according to their Megazord’s systems, across the timelines). The team tries to fly in and stop it but… things go real bad, real fast. 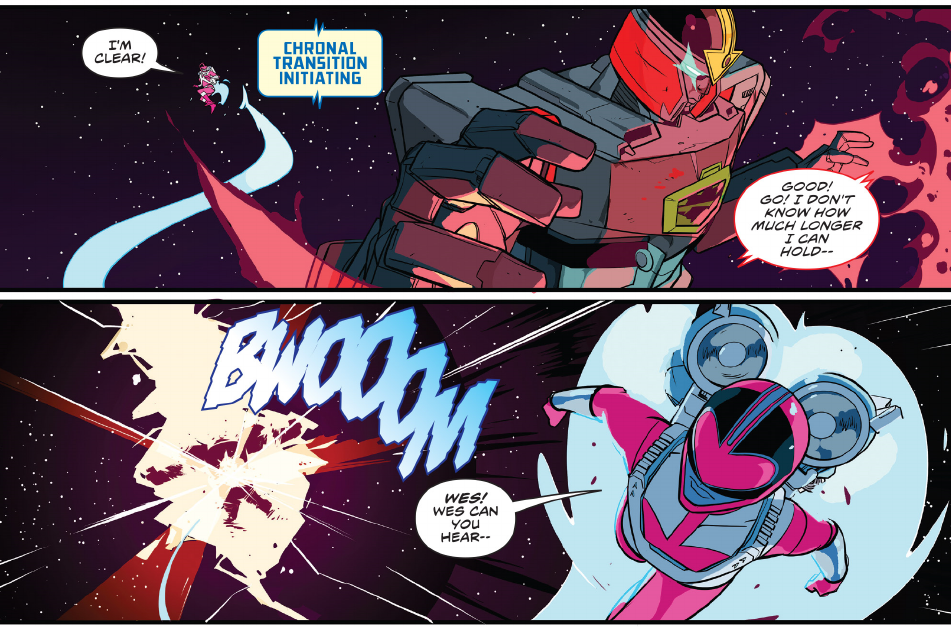 As in, three of the rangers — Trip, Katie, and Lucas — get spaced and “giant fracture in time”-d, in the span of a few panels. The Time Force Megazord is badly damaged, so in one last-ditch effort to close the fracture, Wes tells Jen to get the hell out and find the nexus point in space and time that caused the fracture in the first place, and then sacrifices himself and the Megazord so she can get away.

It’s a pretty grim opening to what you’d think was a big, happy, action-adventure team-up for the Power Rangers. And it only gets slightly better when we check back in with the original Mighty Morphin’ rangers, reeling from Drakkon’s escape.

As the team scrambles around trying to not just find out where Drakkon’s gone, but ensure they’re safe if he comes to try and attack them, it’s Tommy himself that’s going through the most. Literally confronting a version of himself that failed to be redeemed has shaken him to his core, and it’s affecting not just his role as a Ranger but also how he sees himself as a friend to his fellow teammates… and perhaps as more than a friend to one of them in particular.

Yes, Kim and Tommy rekindle their fledgling romance. Then, because they’re teenagers (with attitude) who don’t realise that they’re basically trapped in a horror movie where Drakkon is the ax-murderer ready to cut down the nearest teen he can find, the two leave the rest of the Rangers at the Command Center and go out for a movie night, splitting up after they’re too nervous to even get to first base.

Ah, teens. But once again, if this is a horror movie with Drakkon as the villain, what do you not do!? Split up.

Which is why Drakkon, restored to power after a sneaky side trip to Ninjor, pops out of a portal and stabs Tommy right in the back — not only for Kim to see but also Jen, who time-hops back to the attack literally seconds too late to prevent it. 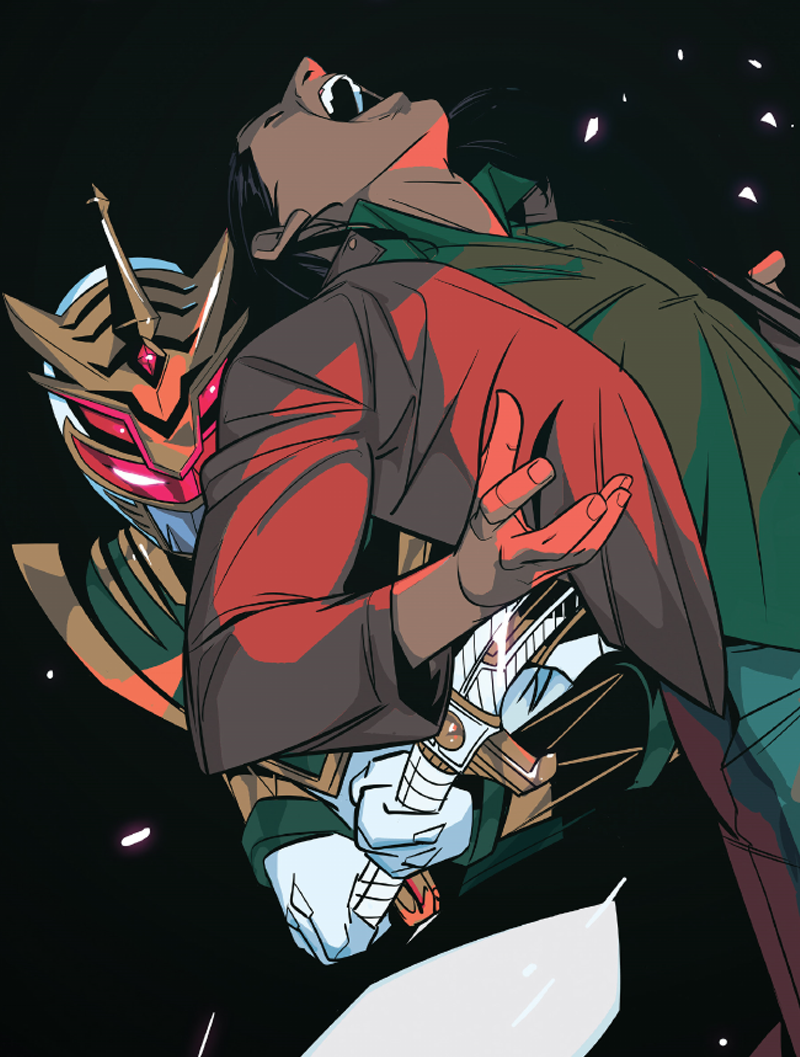 Drakkon makes his escape once more, and while two Pink Rangers meet, Tommy Oliver fades out — no breathing, no pulse. The Green Ranger is seemingly no more. Sure, there’s probably going to be some timey-wimey shenanigans that could erase some of the major fatalities of this issue and beyond as Shattered Grid continues.

After all, a member of Time Force looks like she’s going to sit at the heart of this crossover, and this timeline is definitely in need of fixing. Tommy’s gotta be around to pop up as a main character in like, what, another three Power Rangers series!

But for now, it means we get the grim satisfaction of wondering which Rangers will actually make it to the ultimate showdown with Drakkon, and that’s kind of cool, in a morbid way. What better way to celebrate 25 years of Power Rangers than by bumping off a bunch of them?