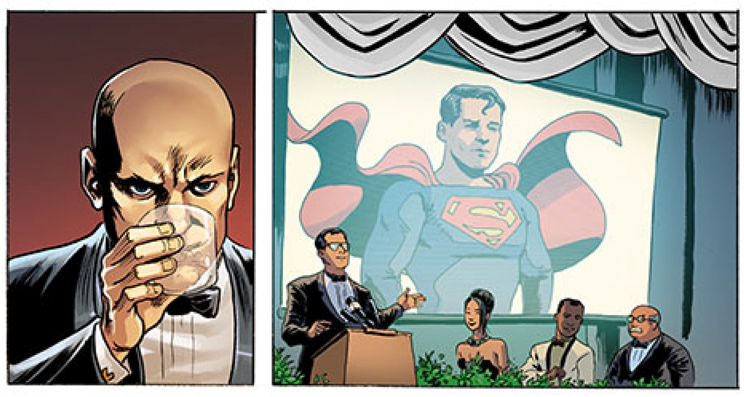 Action Comics Special #1 looks as though it will be featuring a scene where Lois, Clark and members of the Justice League go to the annual fete where people tell mean jokes about Washington, DC insiders. Apparently, you can add super-timing to the list of Kal-El's weird superpowers.

This comic marks the end of the current run of that title, with a lead story focusing on Lex Luthor. A very timely tweet by writer Mark Russell revealed that part of that focus happens at the White House Correspondents' Association dinner, an event that makes Clark nervous:

Asked about the seeming prescience of this scene, hot on the heels of all the hypocritical pearl-clutching after Michelle Wolf's routine at this year's real-life event, Russell said the following:

The future’s pretty obvious when you keep making the same mistakes.

The issue will also feature stories by Max Landis and Dan Jurgens, with art from Francis Manapul, Jill Thompson (who drew the main story excerpted above) and Will Conrad.