Japanese politician Mio Sugita has made international news due to her anti-LGBTQ comments on a television show. The program is co-hosted by Koichi Sugiyama, who composes music for the Dragon Quest games.

This was pointed out by Twitter user Shaun Musgrave (via Duckroll at ResetEra):

You may have seen this video of an awful politician spewing horrendous bile as the interviewers chuckle along with her. What you may not know is that one of the co-hosts of this show, one of the people laughing, is Dragon Quest series composer Koichi Sugiyama. https://t.co/OMrLMlBpUC

The network is very right-wing. The show isn’t mainstream, nor is it widely seen. Sugiyama’s work, however, is. This chyron lists him as Dragon Quest’s music composer as well as his political advocacy. 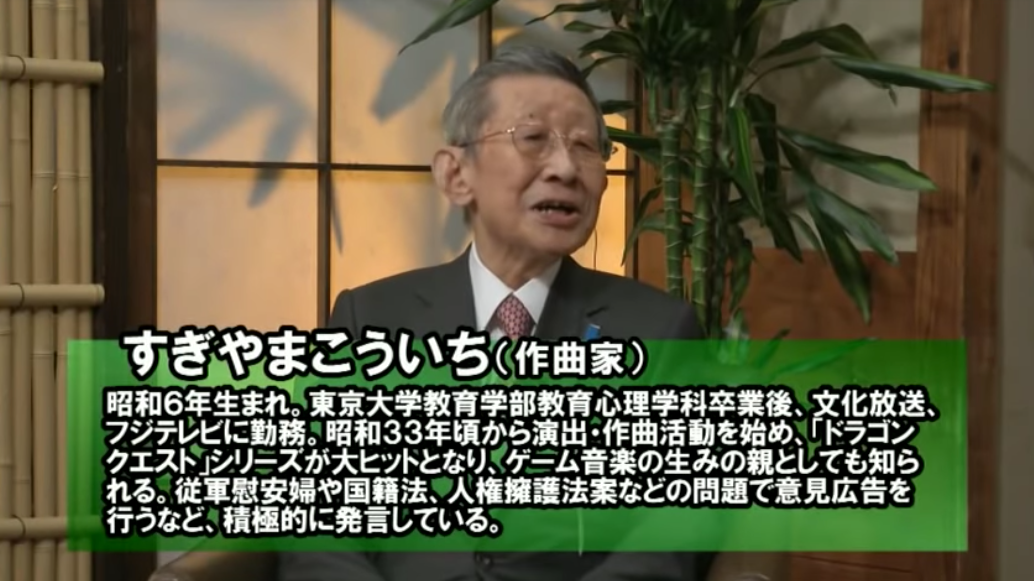 Below are some of Sugita’s comments. The clip has been subtitled and edited (you can see the full episode here). The voice you hear laughing along is Sugiyama’s.

This isn’t in the above clip, but when saying that tax dollars shouldn’t go to gay couples, Sugita added, “This isn’t discrimination. This is differentiation.” (“Sabestsu jyanai desuyo ne. Kubetsu nan desu.”)

Sugita has been heavily criticised for her remarks. The Asahi Shimbun, one of the country’s largest papers, ran an editorial titled, “Sugita’s idiocy on LGBT rejected by society but not the LDP.” Sugita is a member of the LDP, or Liberal Democratic Party, which isn’t liberal, but rather, the country’s conservative ruling party.

This isn’t the only time Sugita has been the center of controversy. Earlier this month, Sugita blamed the alleged rape of journalist Shiori Ito on “clear errors on her part as a woman — drinking that much in front of a man and losing her memory.”

If you are wondering about what kind of politician Sugita is, Temple University professor Michael Thomas Cucek has this explainer:

3) After 18 years as a local bureaucrat, she entered politics. In with the hyper-intolerant right clowns (Yamada Hiroshi, Hironuma Takeo, the Nakaharas) orbiting around Ishihara Shintaro, she snuck into office on the coattails of Hashimoto Toru's brief alliance with Ishihara

8) Backtracking even further, she had only scrapped into a seat in 2012 as the dead last (that is to say least popular) of the lowest-ranked (Rank#12) candidates winning seats off the Ishin no kai's party list in its Kinki region home territory pic.twitter.com/gOhhu5dFKm

10) So calling Sugita Mio a member of Japan's House of Representative is kind of like calling a nail piercing your tire a part of your car. #JapanPolitics

This also isn’t the first time Sugiyama has been the center of controversy. The famed composer has been labelled a Japanese war crime denier.

That might explain why he appears on a network that previously came under fire for a documentary claiming the Nanking Massacre did not happen.

Wonder what Square Enix thinks about all this.