Red Faction: Guerilla was released in 2009. Now it’s back with a re-release, and playing through it again has been a melancholy experience.

I first played the game at release on an Xbox 360, because that’s how I played games back then before everything was released on Steam. At the time, I remember loving it. A GTA-like game, only it’s on Mars and you’ve got a hammer, what’s not to love.

But RF:G’s sandbox exterior was just a ruse. This wasn’t a game like Grand Theft Auto at all, where the world was truly open and unique and beautiful and worth exploring. This world, a dusty shithole with repetitive textures, the same old designs everywhere, single-minded AI and slippery handling, was just an excuse.

It was a way to market a game that was actually just about blowing shit up.

this game is a treasure pic.twitter.com/PQgIKFBLIS

For all the flaws I listed above, the heart of the RF:G experience was a physics engine unlike anything we’d ever seen in a sandbox video game. In this version of Mars, players weren’t just able to blow up cars and turrets, you could blow up almost anything.

Bridges, buildings, towers, bunkers, if it was built atop the red dirt, chances are you could set some charges or fire a rocket into it and it would blow up, its panels and pieces cascading down a hillside with a physics engine that was built to prioritise demolitions work over car handling.

RF:G asked the player to complete open world combat missions, but these were just window-dressing for what was essentially a destructive playground, challenging us to approach ambushes and firefights like a puzzle or strategy game, your targets not individual enemies, but the world around them.

In this way, for all its superficial resemblance to Grand Theft Auto, RF:G’s strategic heart had more in common with everything from World of Goo to Portal.

And it was fun. Shooting bad guys and driving around in a sandbox game is old news, but the joy of blowing a building up—let alone one you’ve broght down on a whole squad of enemies—is a rare and special one. Assessing the scene, guessing where the weakpoints were, laying a bunch of charges, setting them off to watch your target explode then collapse in a pile of smoking debris…God, it’s satisfying just to type it out. 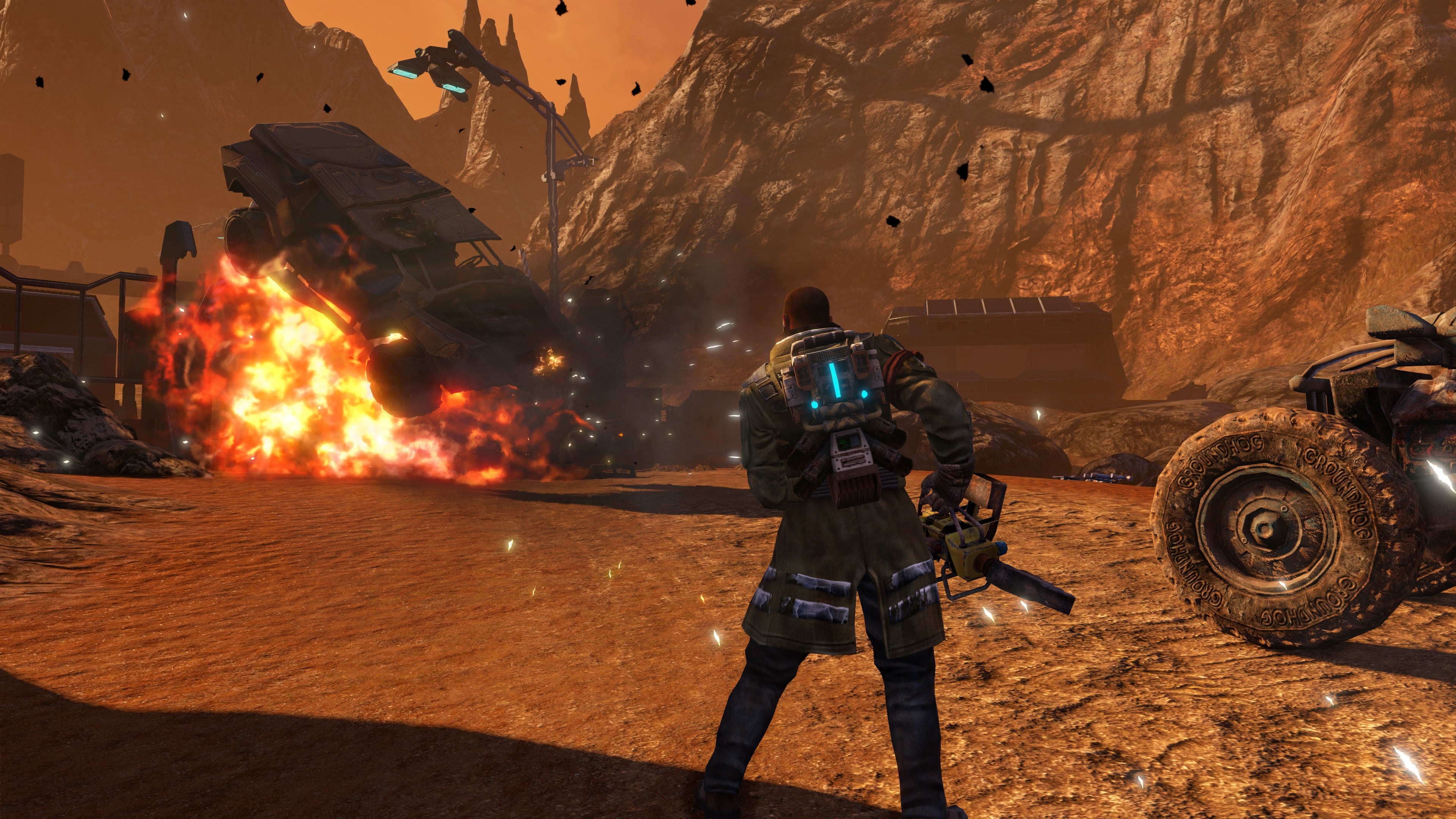 I’m not saying all this as some kind of retrospective re-review, the game is rad and fun, nobody needs me to remind them of that. What I wanted to talk about was how sad it is that, despite RF:G’s clear and obvious successful selling point, it remains basically the only one of its kind.

In video games, it’s normally a given that if something works, we get it again in a sequel. Even games that don’t work are often afford this privelege if enough money has been sunk into the property.

RF:G worked, and it got a sequel, it was just … one of the weirdest sequels in video game history. Red Faction: Armageddon looked at everything good and fun about Guerrilla and decided it would have none of it. It traded vast open spaces and explosive settlements for linear corridors and limited destructibility.

It bombed, THQ went out of business, and here we are, almost a decade later and a game that could have kickstarted a whole new subgenre of “explosive sandbox” has been left on the shelf.

In a better timeline—and in 2018, it feels like we’re trapped in one of the worst—there’d be a Red Faction game or two on the modern generation of consoles, featuring bigger maps, bigger buildings, bigger explosions and more intricate physics.

Maybe even combat that doesn’t suck. Highlight Reel would be jam-packed with videos of Martian buggies shooting 1000ft into the air, or entire colonies collapsing down a mountainside.

But no, in this cursed place, we have nothing. There are games since that have come close to capturing at least some of the RF:G experience. Volition’s own Saints Row madness, Just Cause, Crackdown, they’ve all emphasised the chaos of open world games ahead of tight gunplay and driving, but they’re just not the same.

Instead, the best way to enjoy Red Faction: Guerrilla in 2018 is to just get the remastered version of the original. In many ways it’s aged about as well as can be expected of a 2009 console action title—it’s pretty bare-bones, and gunplay sucks—but laying some demolition charges and seeing a massive tower collapse is as rewarding in 2018 as it was back in the day. 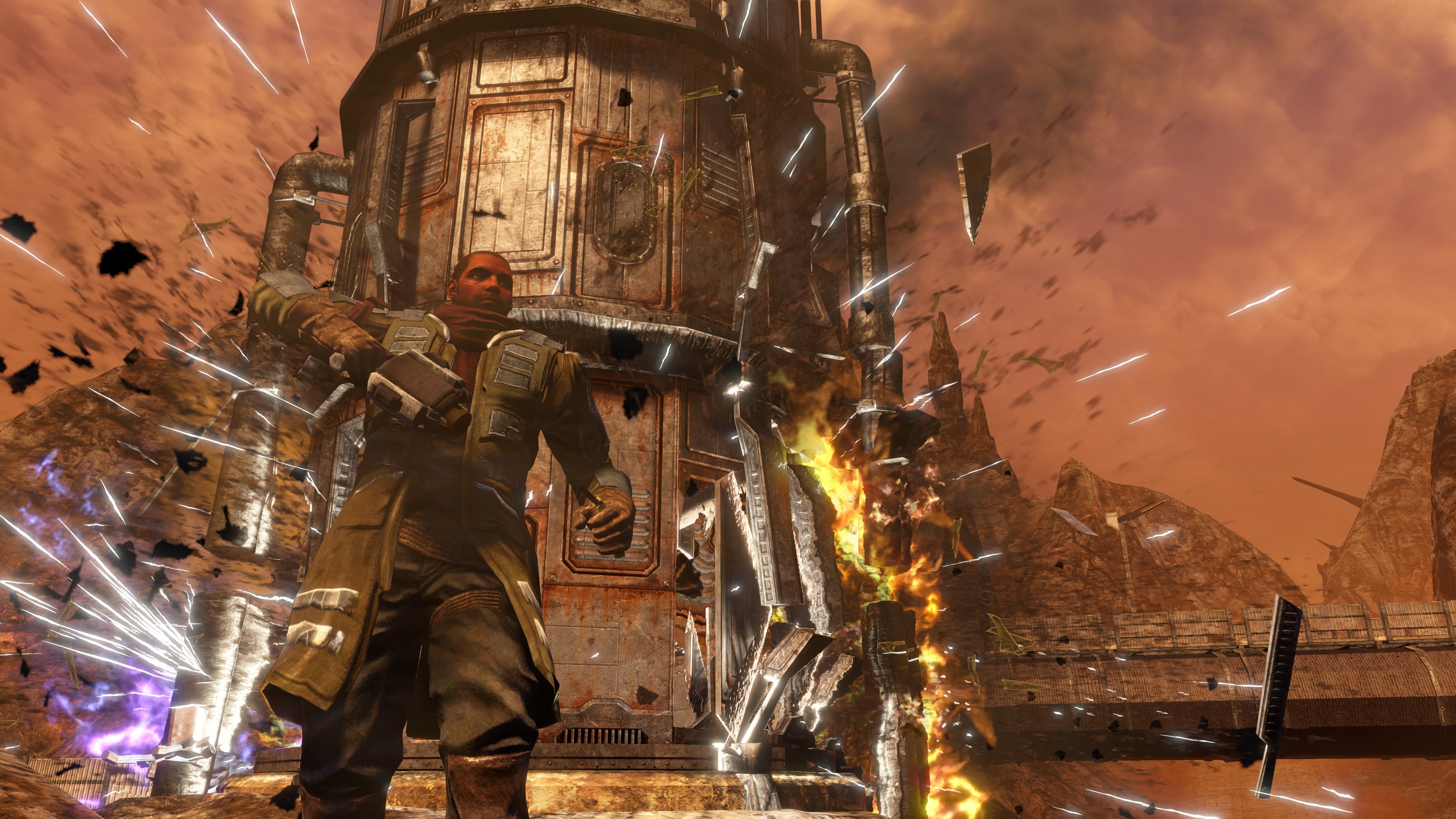