Rest In Pieces, Friday The 13th: The Game

Last month, the ongoing legal battles over the rights of the Friday the 13th franchise caught up with the game, bringing its development to a halt. New content was “unfeasible now or in the future” due to the lawsuit, the game’s publisher said.

Unlike Jason Voorhees, Friday the 13th ain’t coming back. It’s a terribly premature ending for the asymmetrical multiplayer horror game, one that caps off a beleaguered 14 months full of bugs, glitches and gore.

In October 2014, publisher Gun Media released a live-action teaser trailer for a game called Summer Camp that hinted at some kind of ’80s slasher movie experience.

Between the location (Camp Forest Green, which savvy fans know is the new name given to Camp Crystal Lake in Jason Lives), a soundtrack by series veteran Harry Manfredini, and supervision from FX guru Tom Savini, Summer Camp was a Friday the 13th game in all but name.

By the following October, developers IllFonic had a licence in place, and Summer Camp was retitled Friday the 13th: The Game.

Between successful Kickstarter and Backerkit campaigns, Gun raised more than $US1.25 million ($1.7 million) for development from thousands of backers. Kane Hodder, who starred as Jason in Fridays VII through X, joined the team to provide motion capture for digital Jason.

Horror fans who had been waiting since the NES days for another Friday the 13th game were thrilled at the promised features pulled straight from the film series, from locations to characters to kills.

On 26 May 2017, the game released digitally on PlayStation 4, Xbox One and Windows. Repetitive gameplay, long wait times, server issues and copious bugs led to middling critical reviews, but player reviews put a different spin on the problems.

“It’s janky as all heck, but it’s also a blast” became a common refrain. Bugs can be fixed, after all, and this long-overdue love letter to the franchise was scary, hilarious, and an all-around grand ol’ violent time. It wasn’t long, however, before even the most ardent fans became bored.

At times, the game was more intense than most of the films. (Gif: Gun Media)

Early on, there wasn’t much to unlock, so XP and progression were largely useless. Playing as a survivor, you mostly just opened drawers until you were killed, then waited up to 20 minutes for the next match to start.

Out of the staleness rose the teamkillers, those who took advantage of game mechanics to kill counsellors as counsellors. This wasn’t much fun for those simply trying to play the game as intended, and by the end of August, weapons-based teamkilling was removed. 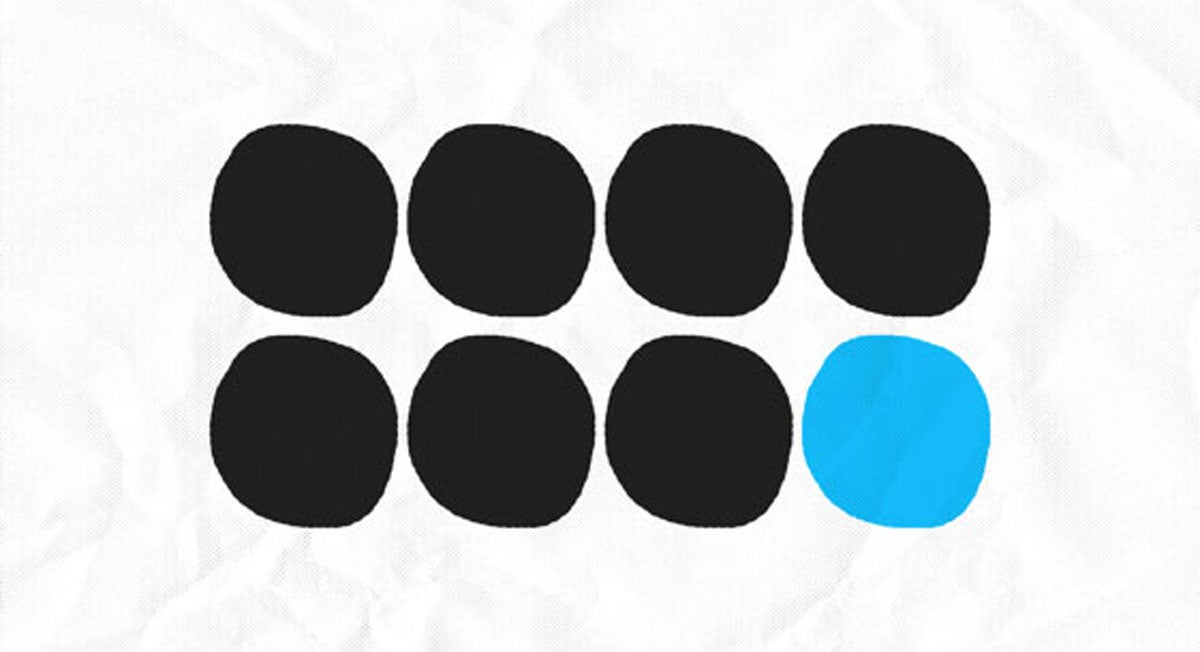 Speculation kept the fanbase buzzing. What did the dots mean? Did they hint at a new Jason? New counsellors? Was the black of one dot darker than the black of another?

Theories floated until October, when Gun Media published a teaser trailer reveal for Paranoia, a new free game mode. There was little actual information about what the mode would entail, but it seemed safe to assume that one of the counsellors would also be a killer.

While the mystery provided a nice diversion, fans were still hungry for new content. Thankfully, October also saw substantial updates. To accompany the game’s physical release — on Friday, October 13, natch — IllFonic added new counsellors Mitch and Fox (based on characters from Part III), a map of The Final Chapter’s Jarvis house, and a new Jason from the same film. 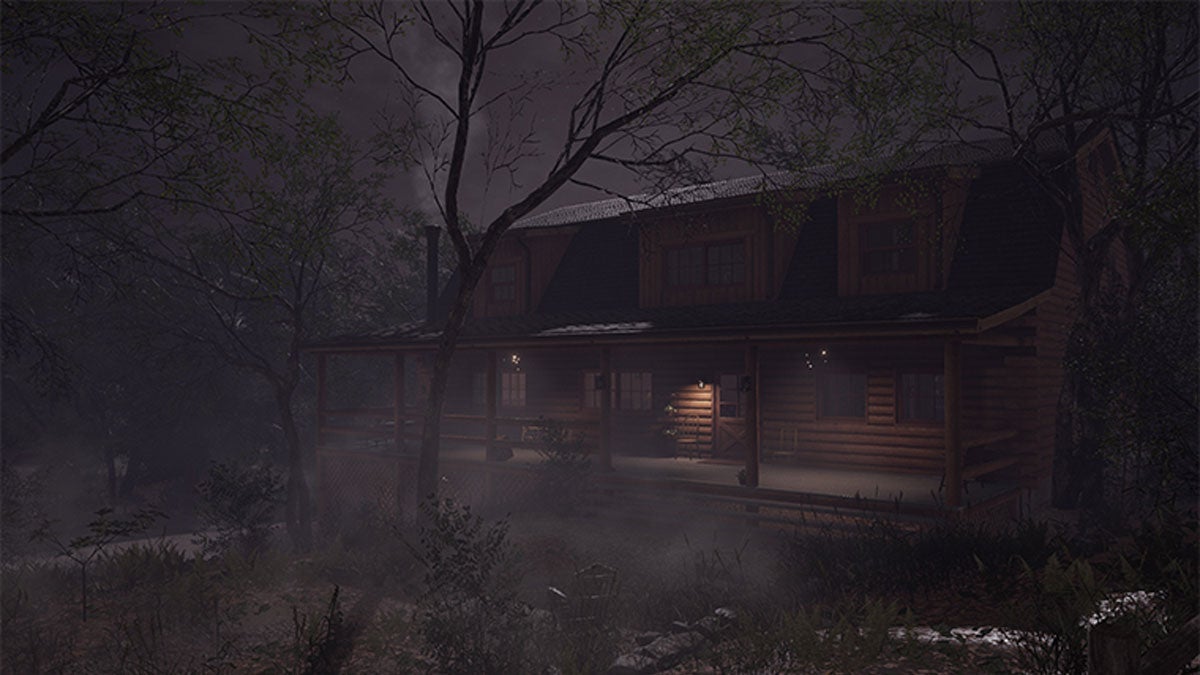 Around this time, the developers also released a content roadmap to give players an idea of what was in store in the future. This kept fans largely satiated, but the vagueness of the timeline was also frustrating given that “soon™” had become a running joke in the community thanks to IllFonic’s propensity for announcing content with no release dates attached.

This came to a head on February 1, when players finally got an update about the long-promised Paranoia mode: It was being indefinitely delayed. There was an internal prototype, but according to the game’s co-creator Wes Keltner, it wasn’t much fun.

“We unanimously agreed, after weeks of playing together, that there’s something there… a glimmer of a very fun game mode. But it needs to stay in the oven longer,” he wrote in a community update.

“We need to keep throwing around ideas, mechanics and features to find the missing piece. But our teams were faced with hurdles to overcome, some greater than others.”

While some fans were thankful for the transparency, others were disappointed that the mode had been announced even though IllFonic didn’t yet have a concrete conception of what Paranoia would actually be.

December saw the launch of Virtual Cabin 2.0, one of the most interesting features of the game. The single-player activity is a puzzle-filled museum of sorts, filled with franchise lore, props and developer commentaries.

It takes multiple playthroughs to find all the clues and reach the ending, which revealed a forthcoming Jason and map, both pulled from the outer space-flavoured film Jason X. As always, the content was promised “soon”. 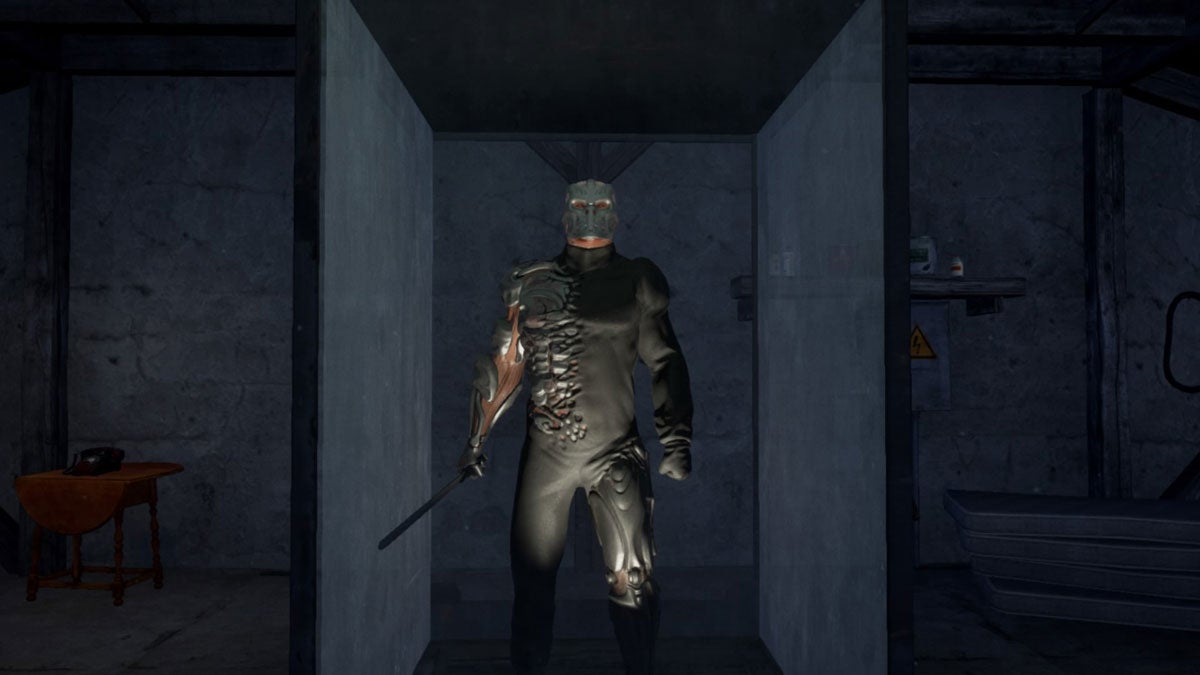 The December update also added counsellor bots to the game so players could sharpen their Jason skills to a fine knifepoint. The bots, however, acted nothing like actual human players. They frequently got stuck on objects, ran around in circles, and wouldn’t do much to help themselves escape.

Against other humans, I was a notoriously inept Jason – playing against me practically ensured that you’d get bonus XP for surviving – but against bots, I could easily and consistently murder the whole group of them. Mummy was proud, but I was bored. 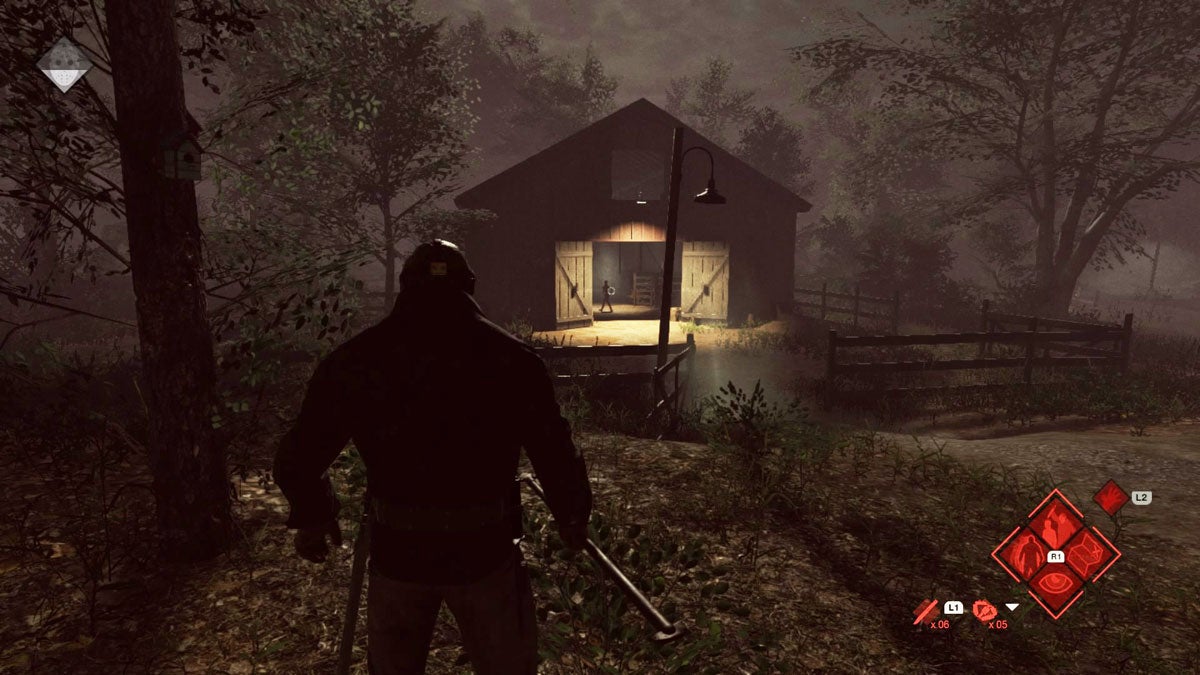 After a Part V-themed update in January 2018, the game had a content drought that lasted several months thanks to a complete engine update that the developers claimed was a vital step towards dedicated servers. IllFonic acknowledged that fans were fed up after the Paranoia debacle and the Jason X tease.

“We want to make sure that when we tell you something is coming, you can count on it,” they wrote in a community update about the engine upgrade, noting that they were pausing all progression on the content release roadmap.

The engine upgrade was finally finished in time for the game’s one-year anniversary. To celebrate, developers released a massive update on May 24 that included a new counsellor, Victoria Sterling.

More importantly, the single-player challenge mode – promised when the game initially launched – finally arrived. This offline solo mode allows players to murder their way through 10 scenarios, each of which features special cinematic skills and objectives. Progressing through the scenarios and unlocking challenges also unlocks emotes to use in the multiplayer game.

The challenges are definitely, you know, challenging, particularly for bad Jasons such as myself. Between getting through scenarios without being spotted, killing all counsellors, and killing some in specific ways, there’s a lot of replayability in the mode. That is, if you can stand sitting through the same unskippable opening cutscenes ad nauseam.

This was the final content to be released for Friday the 13th. Jason X’s Uber Jason and Grendel map are forever sealed away in the basement of Virtual Cabin 2.0, never to be played. My dreams of playable counsellors based on The Final Chapter’s Banana Girl Hitchhiker and A New Beginning’s dirt farmer Ethel will forever remain but dreams.

This is to say nothing of the hopes and dreams of the rest of the fanbase and the developers, who are still committed to bringing dedicated servers to fruition and ironing out what bugs remain. 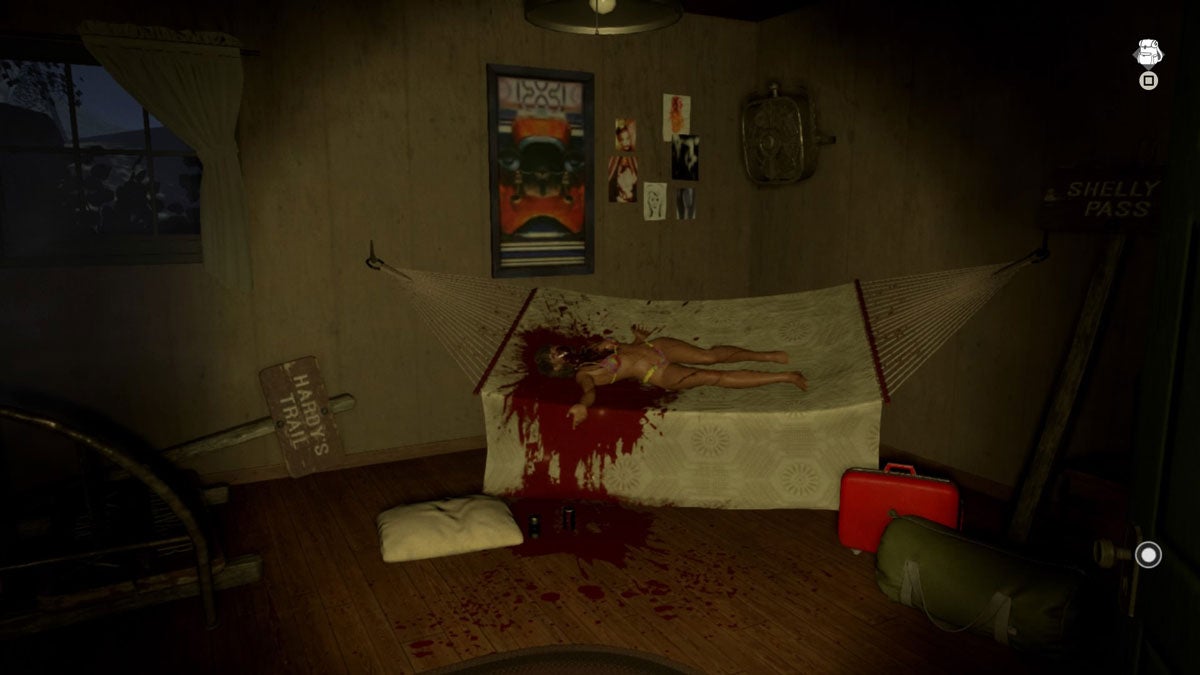 Tiffany probably had hopes and dreams, too. (Screenshot: Gun Media)

Unfortunately, plenty of bugs remain. Glitches and bugs were a chronic hassle and constant refrain during the game’s lifespan. Each new patch seemed to introduce even more issues, from the hilarious (oversized weapons) to the infuriating (escaping from the map counted as suicide).

IllFonic has stated they’re committed to fixing the game and keeping it alive, even if they’re unable to produce new content. Only time will tell how much of the remaining playerbase will be around to finally test out those dedicated servers.

As a player and a fan of the franchise, I’m bummed to see Friday the 13th: The Game put out to pasture when it still had so much potential. After all, it’s janky as all heck, but it’s also a blast. On the other hand, a year’s worth of problems and unfulfilled promises make me wonder if the game wasn’t ill-fated from the start.

If only someone like Crazy Ralph had warned us: “You’re makin’ a game about Camp Blood, ain’tcha? It’s got a death curse!”