We’ve all received crappy gifts for holidays and birthdays. But maybe none on the level of “this is so bad that one day I will completely defy you, shrug off your magical lightning attacks, lift you over my head, and throw you into the nearest random gaping shaft I can find.”

The second volume of Marvel’s Darth Vader comic — by Charles Soule, Giuseppe Camuncoli, Daniele Orlandini, Dono Sánchez-Almara, Erick Arciniega, and Travis Lanham — has been set in the nascent years of the Empire’s rise, charting the final stamping out of the vestiges of the Republic’s downfall alongside the rise of Darth Vader as the tortured enforcer of his new master.

It’s a series that has not only given us a vulnerable, yet defiant Vader, but also glimmers of an Emperor Palpatine delighting in his absolute power, both over the galaxy but especially over Vader. From the very first issue, Palpatine has goaded and dismissed his apprentice, treating him like a lapdog as Vader is sent, along with the Inquisitorius, to hunt down the last of the Jedi.

Basically, he’s the galaxy’s most powerful troll. And, in pulling one of his trolliest moves yet on Vader at the climax of this week’s Darth Vader #20, Palpatine might have set the stage for Vader’s eventual turn against his master by the time of Return of the Jedi.

How? By “rewarding” Vader, having vanquished the last of the rogue Jedi known the Empire (The Phantom Menace‘s Eeth Koth, fact fans!), with a new ship… 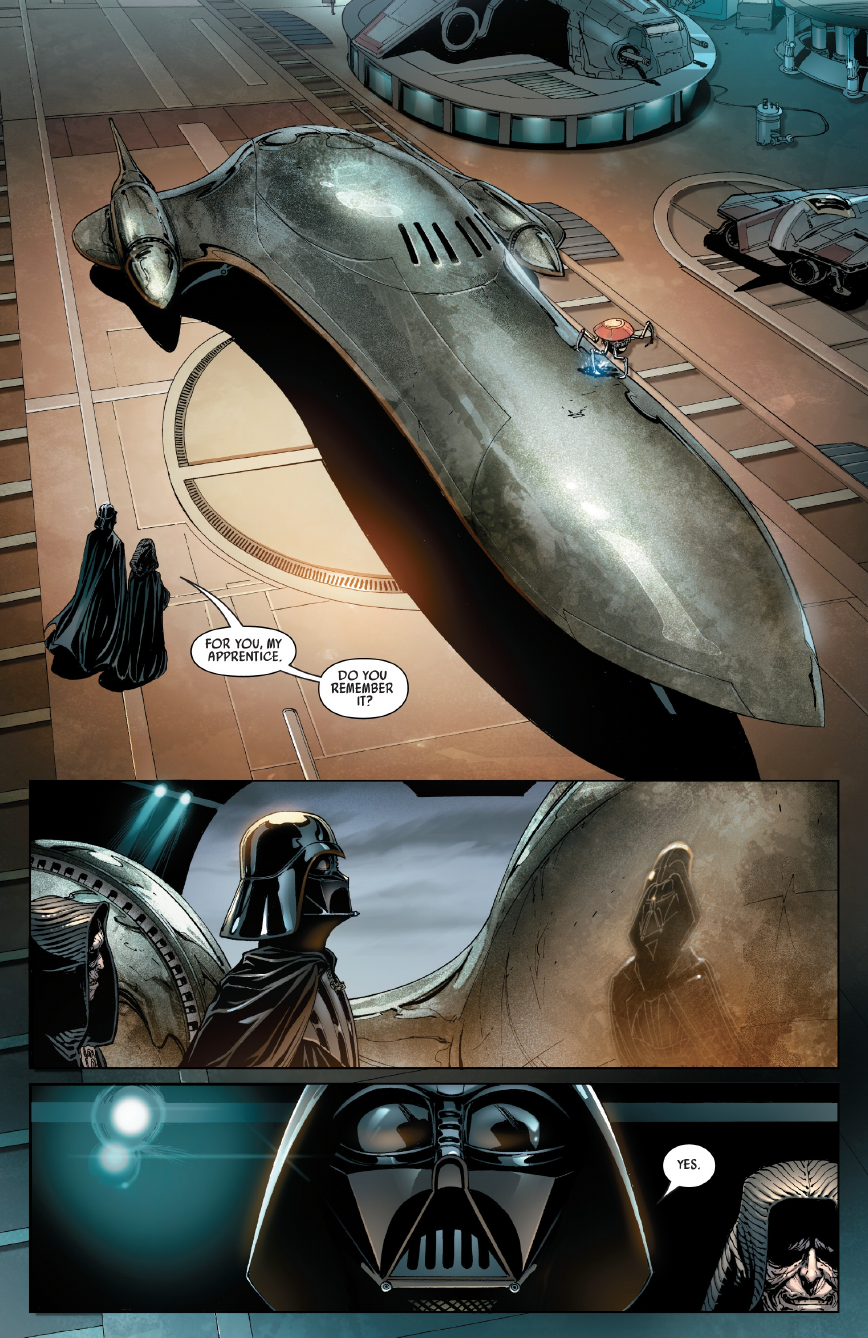 His wife’s ship. You know, the one he stood in front of and choked her while in a fit of rage, just before she died? Ah, treasured memories.

Vader’s rage in the moment is palpable, but controlled — he merely crushes the droid attempting to restore Padmé’s ship instead of flying into a fit of rage more befitting of the Dark Lord of the Sith. But from the shit-eating smirk on Palpatine’s face, you’re meant to understand what an almost comically cruel thing this is, all to goad Vader’s rage and hatred further and further, turning him into more of a beast than a man.

But Vader’s response, or relative lack thereof, is telling. Instead of really relinquishing himself to the anger Palpatine stokes, he takes the moment to barter with his master — he doesn’t want a memory from his past as Anakin Skywalker, he wants an actual reward for doing his bidding: his own world. 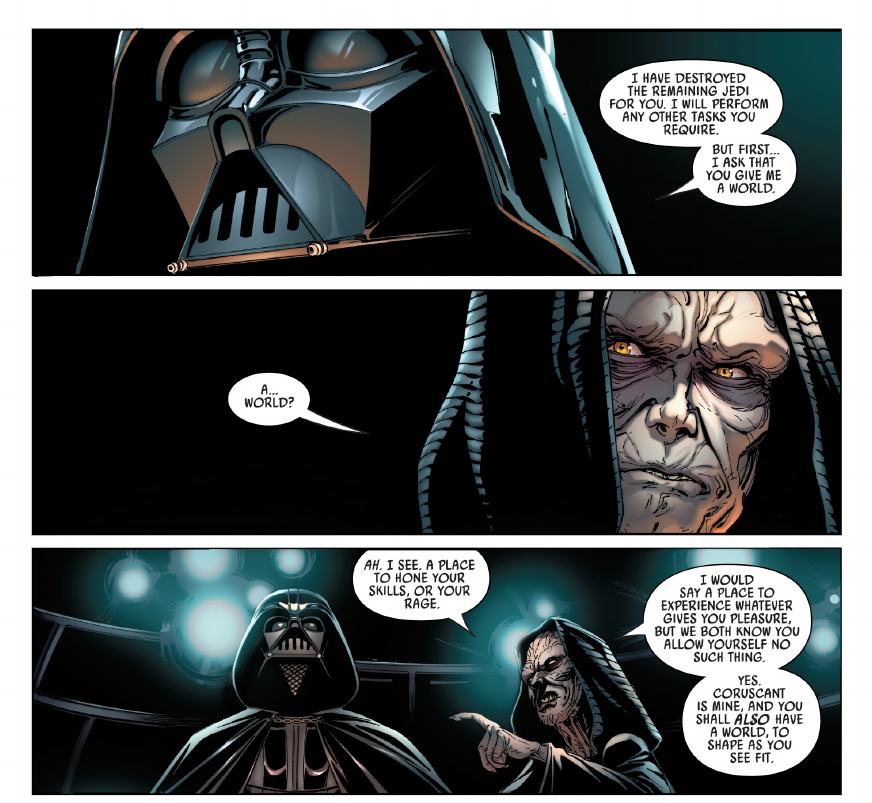 Palpatine, still on his trolling high, actually relents, thinking Vader just needs somewhere to forge the rage he has stoked within his apprentice. But it’s a choice that might ultimately be Palpatine’s downfall in the long term — because Vader asks to take Mustafar, his very own “birthplace” as the man he has become, as his own.

We know, of course, that this is where Vader builds his infamous castle (long a facet of the old Star Wars EU, but re-canonised by its appearance in Rogue One), but by giving Vader a place of his own, Palpatine has granted him a place where he can be separate from the will of his master and make his own plans for vengeance away from prying eyes.

Darth Vader #20 kicks off what is to become an ongoing arc about the construction of Vader’s castle, a location that’s long been rumoured to be much more important to the future of Star Wars than you’d expect.

But its creation is also seemingly the start of an important divergence in Vader’s path — a place for him to begin plotting ways to defy and overcome the cruel creature he’s enthralled to. There’s a dark amusement thinking that all this could stem from Palpatine basically trying to troll Vader. As Luke goads him in Return of the Jedi, his overconfidence is his weakness, after all.