Spider-Man’s Take On Police Feels Out Of Touch

Spider-Man has taken on his share of street thugs and supervillains, sometimes teaming up with the police to face down foes and rescue the people of New York. While Spider-Man on PS4 undoubtedly shows Spidey’s allegiance to his community, it also casts him as a big fan of police and their tactics that sometimes conflict with that civic mindset. From cheesy detective impressions to Rikers prisoner beatdowns, Spider-Man’s uncomplicated approach to crime clashes with the reality of day to day life.

One of the earliest things you do in Spider-Man is go around activating security towers, made by Oscorp but used by the NYPD, that make it easier for Spider-Man to track crimes as they happen.

Narratively, these towers allow the police to better surveil citizens; they also give Spider-Man access to police frequencies. They’re always listening, giving out calls to car chases and telling the player about break-in attempts that Spider-Man can thwart before the crime occurs. The uncritical use of these towers struck some players, especially those who live in New York, as odd.

Meanwhile, Spider-Man’s enthusiasm for the police—from his stated love of busting drug deals to his cheesy “Spider-Cop” impersonation—had my coworker Tim Rogers calling Spidey a “narc.” While I found Spider-Man as good-hearted and heroic as ever, he was also way more accepting of state power than I expected from a hero with a history of being wrongly maligned by the press and police.

Modern superhero games have trended further and further towards authoritarian extremes. Injustice 2’s core conceit hinges upon the audience believing that Superman, that all-American Kansas boy, could conceivably rise to lead a strict and heartless regime following the Joker orchestrating Lois Lane’s death. That incident, and its extremes, call to mind the reactionary shift in American politics since September 11th, 2001.

We can believe in Superman’s militarism because it reflects a 21st century historical reality. Despite Superman’s role as antagonist, the heroes facing off against him—and begrudgingly allying with him once Brainiac enters the story—share a similar authoritarian streak. This is best expressed in Batman’s disturbing “Brother Eye” surveillance system, which can spy on anyone in the world.

And while Spider-Man’s Oscorp-made, police-operated surveillance towers aren’t as extreme as Brother Eye, they are features of a similar predictive, Watchdog-esque surveillance state.

Spider-Man have never quite shared Bruce Wayne or Superman’s drive for power or control. He’s the the boy from Queens who rose to the challenge. New York based superheroes have always had a much more intimate feel than other characters.

Luke Cage isn’t just a super strong hero; he’s Harlem’s hero. Daredevil is the protector of Hell’s Kitchen. And while Spider-Man often swings around Manhattan, he still can drop in at a bodega for a sandwich in Flushing or Astoria. That street-level, community minded nature clashes with the high-tech surveillance of the game’s towers and the game’s outlook on police. Anyway, here’s an album of me kicking these prisoners asses with my super strength and drone. 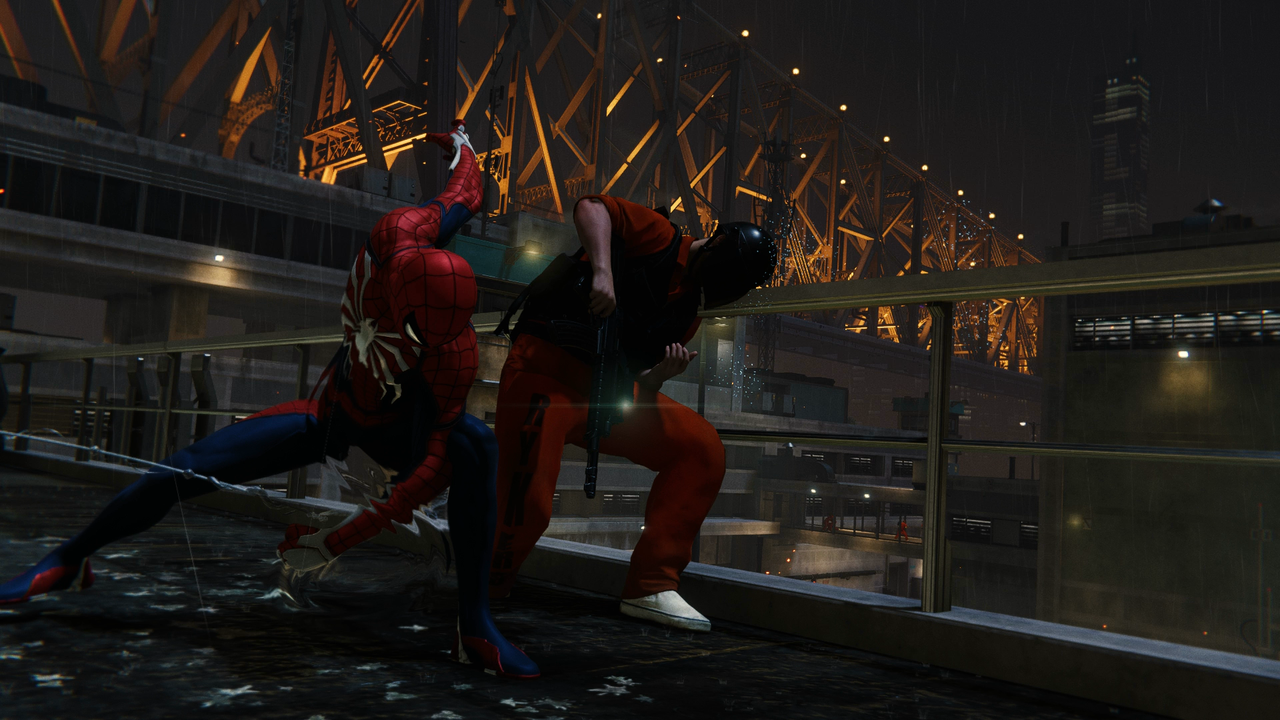 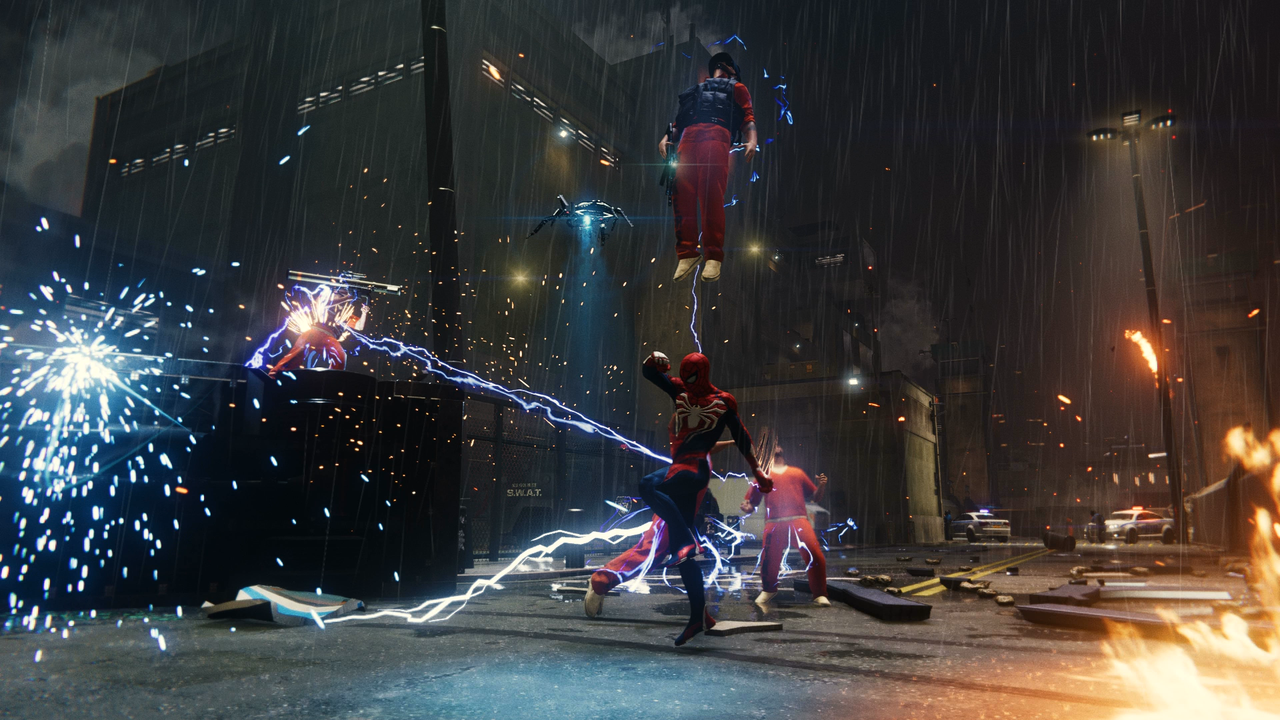 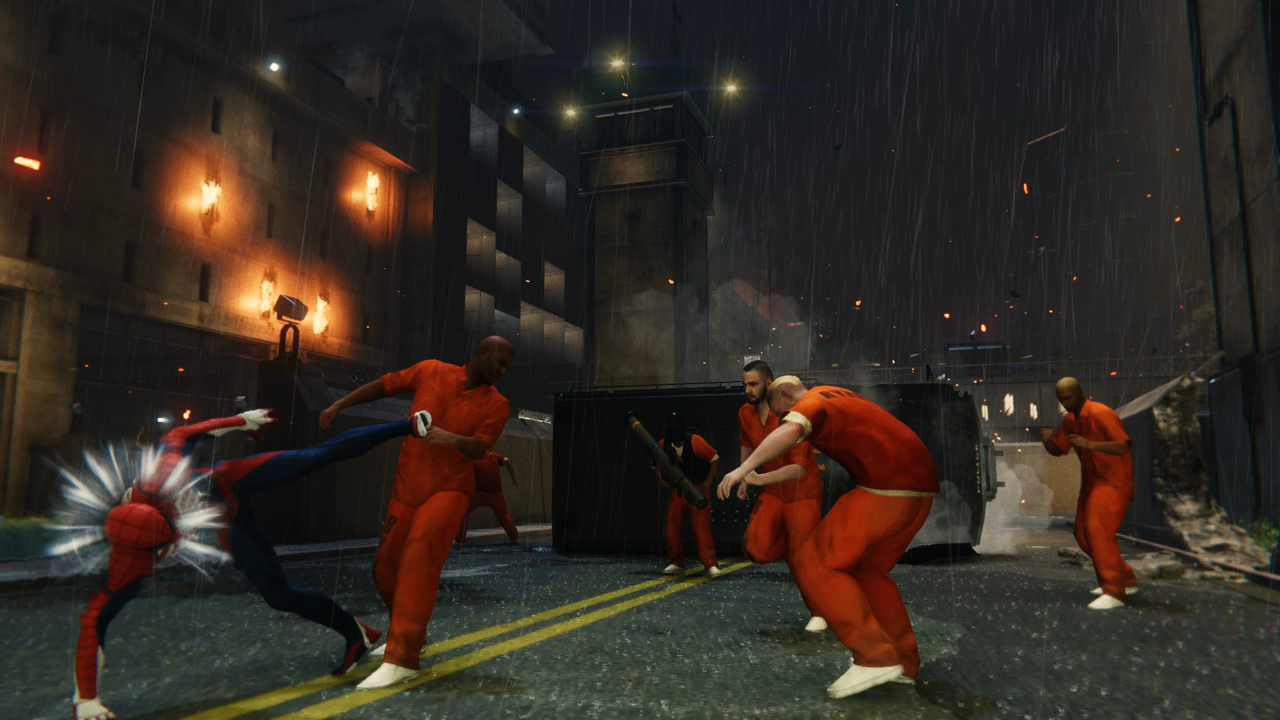 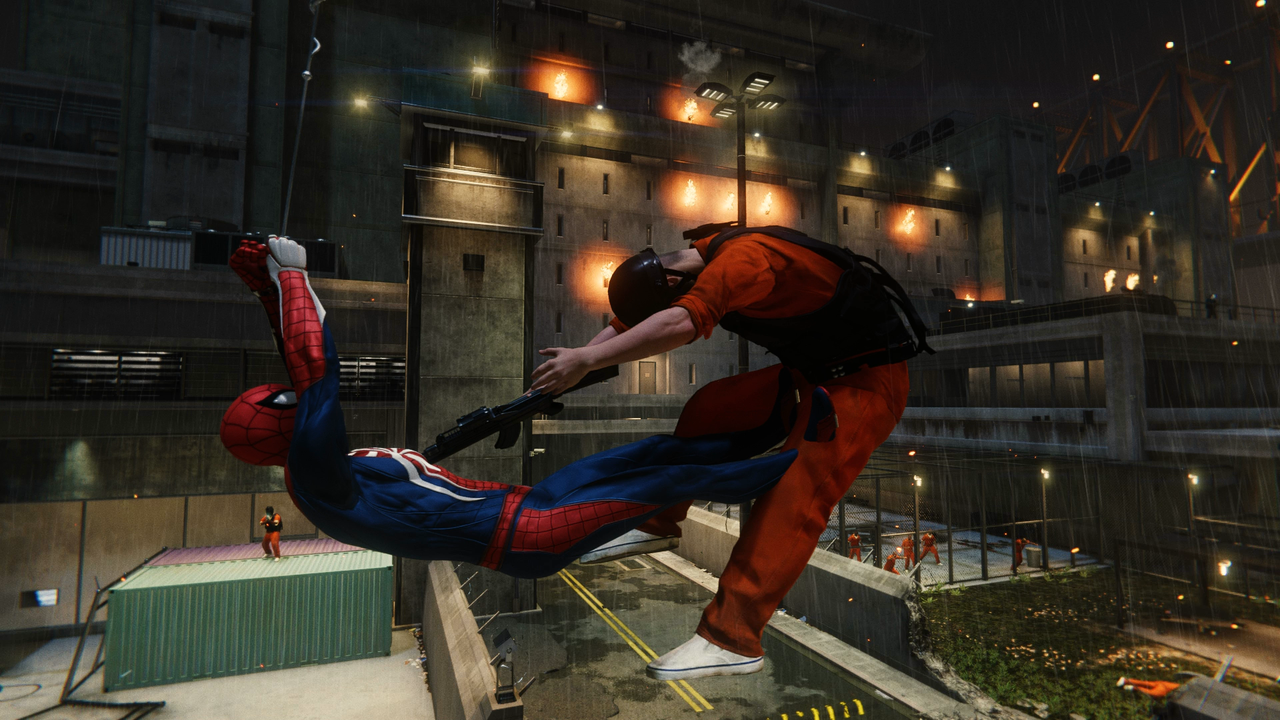 Police are an unimpeachable group in Spider-Man. They show no real flaws and make no mistakes. They don’t feel like an integrated part of the the community; they pepper cutscenes and sometimes walk the streets but mostly show up as an allied faction in procedurally generated crime events. Even if Spider-Man’s New York is largely a fiction, it points towards a real place.

New York is many things, but it is also the city of Eric Garner, stop-and-frisk, and Palantir. Rikers isn’t some fake pastiche location like Arkham Asylum. Real life police are a complicated presence in New York, but in Spider-Man they’re part of Spider-Man’s vigilante quest for justice, rather than members of the communities they’re supposed to protect.

This simplification extends to the game’s portrayal of the criminal justice system as well. About half way through the story, villains orchestrate a massive breakout at Rikers Island. It’s treated as a crisis so dire that Spider-Man temporarily abandons his search for a potentially pandemic-causing biological weapon to help the NYPD bust skulls and put down prisoner riots. Without fail, every convict is violent and aggressive.

In reality, New York is moving to close Rikers on a ten-year timeline on the recommendation of organisations like the Independent Commission on New York City Criminal Justice and Incarceration Reform.

The majority of people incarcerated in Rikers’ are people of colour, and many are citizens waiting for their trials in a backlogged court system, often for misdemeanours and unable to pay expensive bail. In one of the most most prominent cases, 16-year-old Kalief Browder spent three years in Rikers—a majority in solitary confinement—awaiting trial for the theft of a backpack.

He committed suicide two years after his release from prison.

In real life, the conditions at Rikers Island and the systems surrounding it are complex, but games like The Division and Spider-Man flatten that complexity in favour of giving you criminal enemies to overcome. The Division features “the Rykers” as an opposing force for much of the mid-game, and while its radio makes mention of how many prisoners are in jail for minor crimes like drug possession, your primary interaction is to shoot everyone.

In Spider-Man, these prisoners function as generic thugs to fight in waves. Despite being a superhero who is on the side of the people, when faced with this element of his city, Spider-Man forgets his allegiances and just enjoys beating the shit out of them. 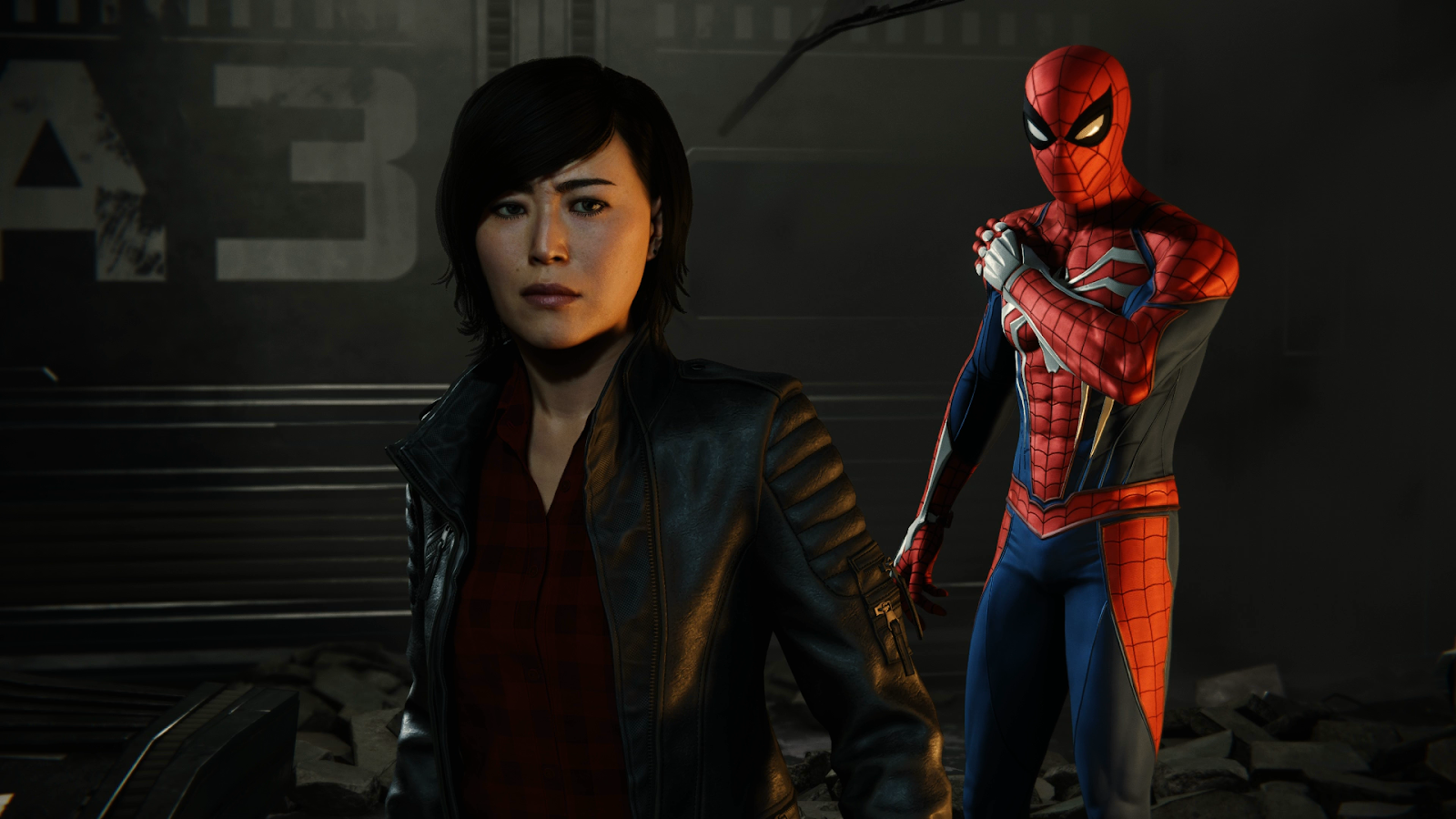 While Spider-Man’s criminals are one-note, the game features a diverse and, I’ll admit, likable cast of supporting police officers. Spider-Man’s radio contact Yuri Watanabe is beleaguered but reliable, working with Spidey to protect as many people as possible. Miles Morales’ story hinges on the integrity and heroism of his police officer father Jefferson Davis. Watanabe and especially Davis are fun characters who I like spending time with.

Their idealism provides a powerful contrast to the cruel, destructive forces of Silver Sable and her mercenary corp, who care little for collateral damage. As they crack down, side quests open up where Spider-Man needs to rescue protestors imprisoned by Sable. In these moments, Spider-Man seems to suggest that if policing is necessary, it must be something more communal, and these standout police characters suggest such a thing might be possible.

But this can’t quite overcome the game’s tendency to paint simplistic portrayals of police as good and criminals as evil.

Spider-Man’s simple presentation of crime and policing feels tone-deaf in the modern age, when more and more people are growing aware of the class and race dynamics of policing. This isn’t to suggest that the game needs to take a break every ten minutes to infodump real world statistics, but games are released in the context of their time. We’re post Edward Snowden, living in the age Black Lives Matter.

Last week, Dallas police officer Amber Guyger shot and killed 26-year-old Botham Shem Jean in his own apartment. This is the world we live in and the world Spider-Man was released into. While it might be nice to escape into a world where these problems don’t exist, that is a luxury that countless people cannot afford.

Spider-Man’s portrayal of policing feels divorced from reality, to the point that it feels out of line with Spidey’s comic book heritage. Comics often speak to what’s happening in the real world. Captain America assumed the role of Nomad in 1974, the same year that Richard Nixon resigned from office in the wake of the Watergate Scandal.

The X-Men have a history of allegorical representation of minoritised and persecuted groups. Spider-Man doesn’t seem interested in reacting to the real world. My colleague Tom Ley wrote about this at Deadspin, noting that nearly every side activity involved aiding the police. This stands in contrast to games like Spider-Man 2, where Spider-Man returned as many lost balloons as he webbed up muggers.

Instead of being part of the complex life of the city, this latest Spider-Man sees a black-and-white world of cops and robbers. He aids in state surveillance, standing unquestioningly alongside an overly idealised caricature of the police. He’s still friendly, but I don’t know if he’s part of the neighbourhood now.