World Of Warcraft Battle For Azeroth: The Kotaku Review

“Well, it’s more of the same” is generally my answer when people ask me how I’m enjoying World of Warcraft’s seventh paid expansion, Battle for Azeroth. Then I spend several minutes explaining why that isn’t a bad thing.

Blizzard has spent the past six years transforming World of Warcraft from a tired massively multiplayer online role-playing game that was seriously showing its age (circa 2012's Mists of Pandaria) into something fresh and new.

The developer has amped up the writing, implemented exciting new ways to tell stories, and filled the world of Azeroth with secrets and treasures. Between 2014's Warlords of Draenor and 2016's Legion, World of Warcraft today feels like a completely different game.

Battle for Azeroth doesn’t change the game very much. Aside from a revamp of how player-versus-player combat works and a couple of new multiplayer mini-games (Island Expeditions and Warfronts), the latest expansion follows exactly the same formula as Legion before it.

Pick a questline, any questline.

Players travel to a new land, Zandalar for the Horde and Kul Tiras for the Alliance, where they are given their choice of adventuring zones to quest through. Thanks to the level scaling introduced in Legion, these zones can be tackled in any order. Players ride from location to location, picking up and completing quests. Each zone’s main storyline generally leads to a dungeon.

What about the titular battle? Along with the dramatic pre-launch events that led to the destruction of both the undead and night elf capital cities, players eventually open up War Story quests. These questlines take players into enemy territory, where they will be instrumental in collecting gizzards and killing a certain number of things for experience points and loot.

It’s like a lighter version of the regular storyline, only without extensive voice acting and with more opportunities for PVP combat.

If that isn’t enough wartime activity, players can also send non-player-characters on timed missions to harvest resources, because someone keeps telling Blizzard we enjoy this social game bullshit in our MMO.

It’s one of the main ways to gather the faction reputation to unlock the expansion’s allied races, variations on existing player races meant to bolster the ranks of the Alliance and Horde. I’ve yet to meet a player who enjoys this aspect of the game.

As much as I complain about being flooded with quests, it’s really one of my favourite things about modern day World of Warcraft. Each new group of exclamation point-sporting non-player characters I encounter has a story to tell.

A blood cult is using its evil power to supplant the local spirits, and players must recruit the aid of massive mystical beasts to stop them. One of the most powerful fleets in the world has gone missing, and only the player has the skill and smarts to unravel the mystery. 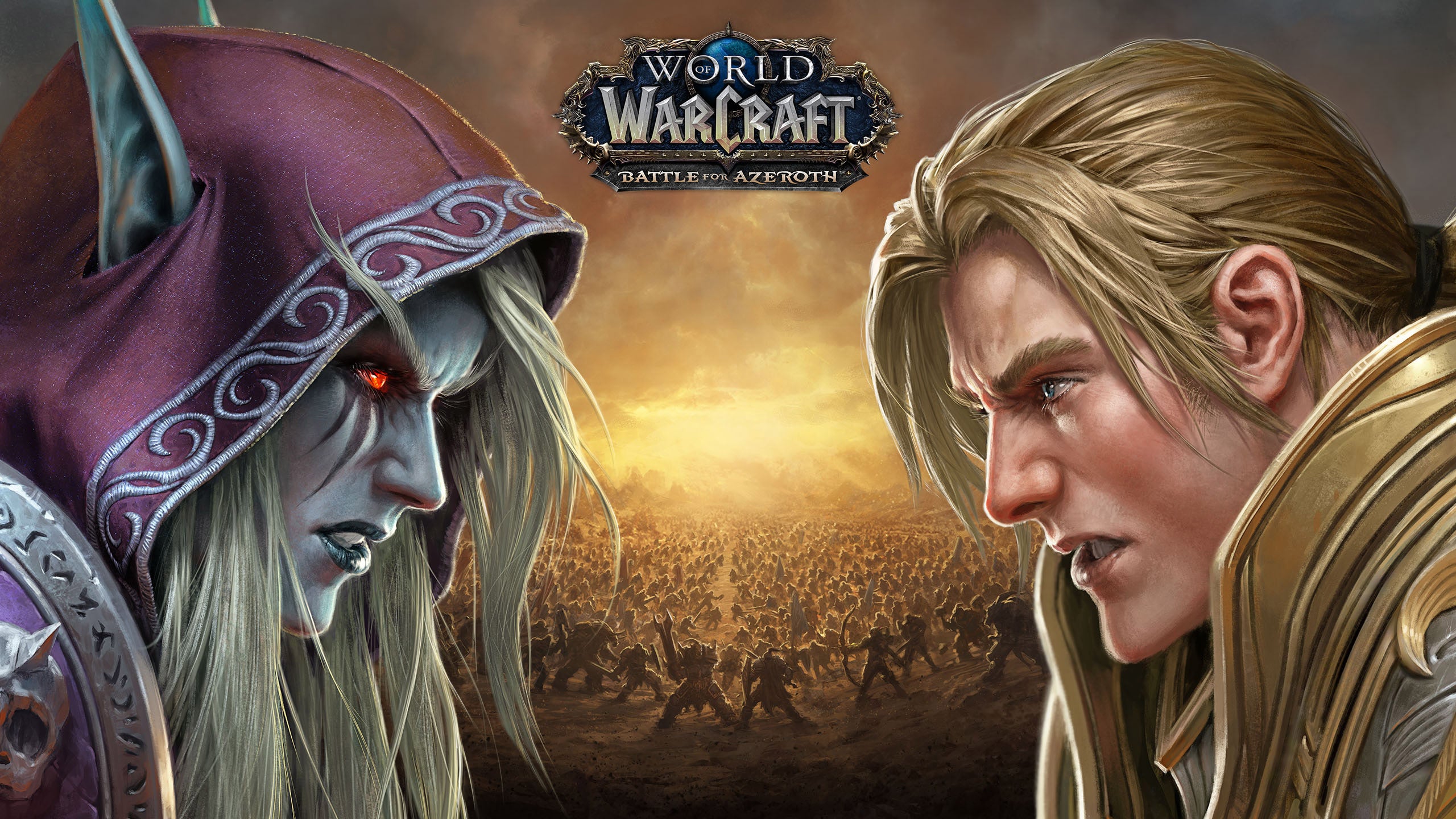 World of Warcraft: Battle for Azeroth

More World of Warcraft than ever before!

Wonderful storytelling, lush visuals, excellent music. More of what I play World of Warcraft for.

Took Alliance Warlock from level 110 to 120, completing hundreds of quests and poking at dungeons. Switched to Horde and had a much better time. Several dozen hours invested so far, and still playing.

Compelling storylines make questing in World of Warcraft a compelling activity, but it isn’t just the writing that draws the player in.

Blizzard’s storytelling technique has been evolving for years, slowly replacing pre-rendered cinematics with fancy in-game camerawork and art to provide a sense of drama and scale. As players approach new areas, the landscape seems to unfold like a pop-up storybook, revealing fantastic landscapes.

My favourite example of this is the Necropolis, temple of the death Loa (spirit) Bwonsamdi in the troll island nation of Zandalar. One moment the player is trompsing through a lush swamp, and the next they are in another world.

It’s astounding that a 14-year-old video game can still take my breath away. Every time I begin to get a little bit bored with whatever forest or desert I’m wandering through, Battle for Azeroth tosses me a vast temple, a rocky fjord, a hidden grotto or a couple of alpaca.

Dolly and Dot are my best friends. They pull this wagon through dunes of sand.

What Battle for Azeroth lacks in new stuff, it makes up for in character. By sticking to the formula established in Warlords of Draenor and Legion and not going overboard with complicated new game mechanics, the World of Warcraft team has been able to focus more on the personality of the characters, landscapes and encounters. The World feels more like a living and breathing thing.

Perhaps that’s why Battle for Azeroth, in its current form, doesn’t have nearly as much to do with actual battle between the Alliance and Horde as the electrifying events leading up to the expansion’s launch. Players are spending levels 110 through 120 falling in love with Azeroth all over again, making the upcoming battles mean something more than PVP combat.

I am interested to see how the Battle for Azeroth unfolds over the coming months, once the excitement over the initial launch dies down. The addition of Warfronts, team-based scenarios based on the original Warcraft real-time strategy game, should be quite entertaining.

I’m looking forward to seeing how this war escalates. Will the Alliance and Horde lose more cities? Will our senseless conflict lay waste to these new lands? Will the expansion’s main gimmick, using the Heart of Azeroth artifact to power up special Azerite armour pieces, get more interesting?

Or will Blizzard just give us more of the same, because I am completely fine with that at this point. Stories so interesting I’ve defected to the Horde to make sure I get to enjoy them all? I guess I can live with that.