assassins creed odysseyassassins creed originseditors picksfeature
To sign up for our daily newsletter covering the latest news, features and reviews, head HERE. For a running feed of all our stories, follow us on Twitter HERE. Or you can bookmark the Kotaku Australia homepage to visit whenever you need a news fix.

Of the many differences between last year’s Assassin’s Creed Origins and this year’s Odyssey, the changes to upgradable abilities have the most dramatic effect on gameplay.

Origins’ skill trees were a convoluted mess even at the time, and Odyssey’s refinements bring that messiness into sharper relief.

The majority of Assassin’s Creed games haven’t included action RPG-style skill trees at all; those sorts of systems tended to be more of a Far Cry thing. Ubisoft Montreal, the main studio behind last year’s AC Origins, introduced skill trees to Far Cry in 2012’s Far Cry 3, and various other Ubisoft studios went on to experiment with different upgrade systems through 2016’s Far Cry Primal.

As I pointed out earlier this year, Far Cry 5 cleverly collapsed and refined the Far Cry skill tree compared with previous games. It was a big improvement to what had become an ungainly and confusing system. 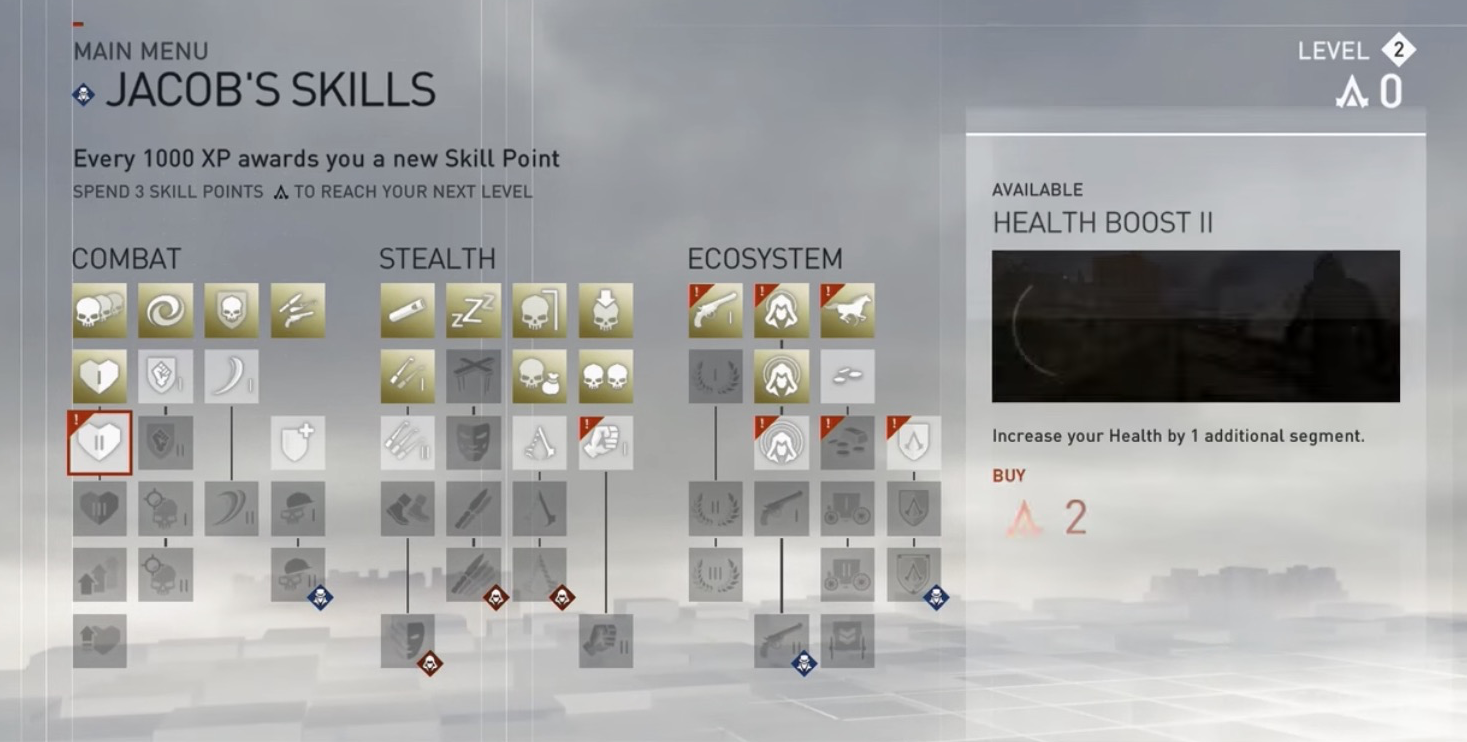 Ubisoft Quebec, the development studio behind Odyssey, was actually also the studio to introduce skill trees to Assassin’s Creed in 2015’s Assassin’s Creed Syndicate. Last year’s Origins took the concept and ran with it, with mixed (and often messy) results.

AC Origins: A Ton Of “Abilities,” Only A Few Cool Ones

The first time I looked at Origins’ skill tree, my eyes crossed. Look at that friggin’ thing! It looks more like a Zachtronics game than an upgrade menu.

A hundred hours later, however, it had become clear that while the upgrade menu may have seemed like it offered an overwhelming number of options, most of the nodes I unlocked didn’t actually do all that much. 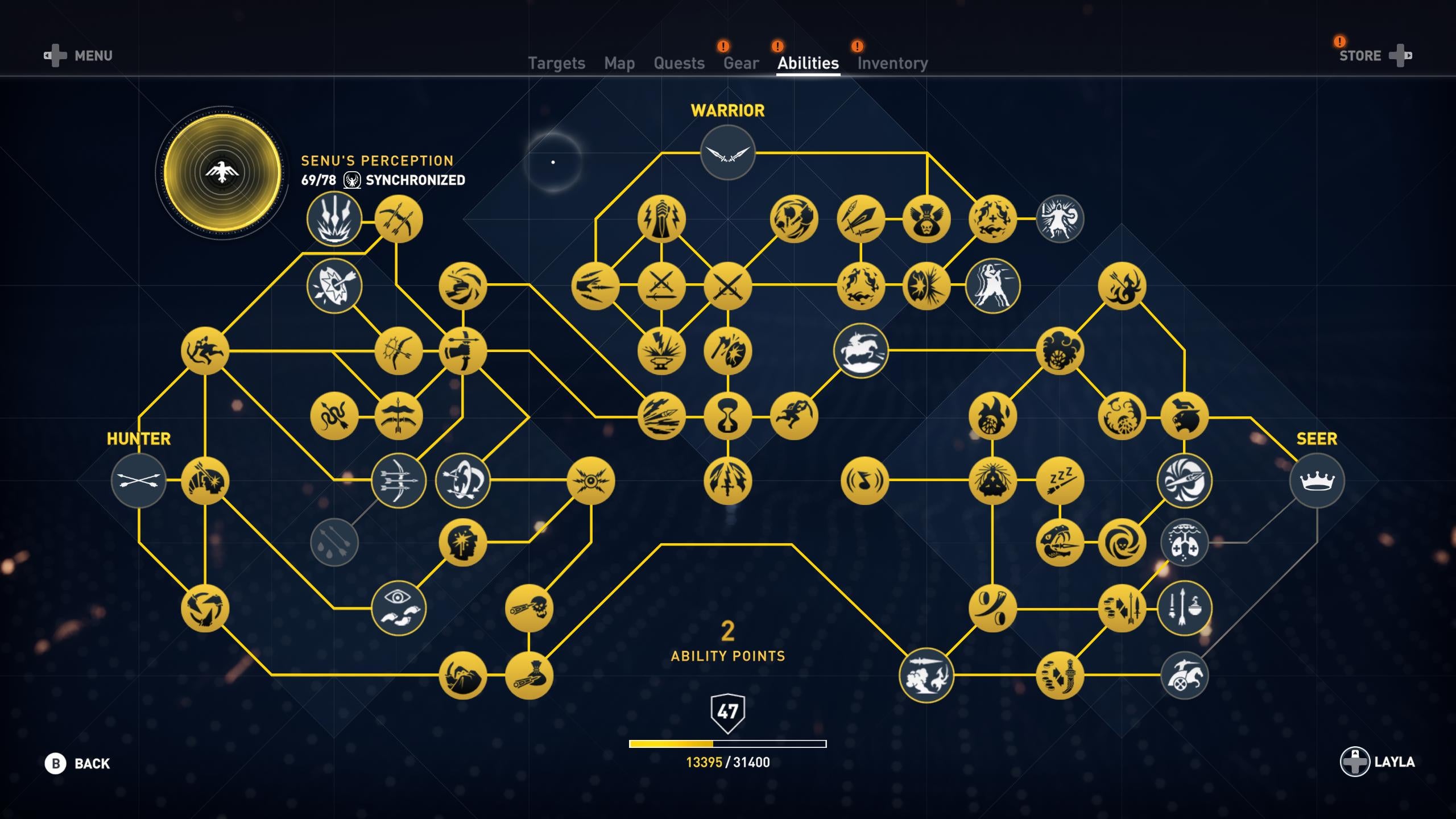 Origins divided its upgrades into three skill-trees: The hunter tree governed bows and stealth abilities, the warrior tree granted melee combat abilities, and the “seer” tree was a grab-bag with gadgets, tools, and transportation, as well as commerce and other general upgrades that didn’t fit anywhere else.

Some of the nodes granted useful, interesting skills that you could actively use. Many of the seer tools, like berserk darts and poison traps, had practical applications in-game. Chain assassinations let you string together stealth kills, and the “enhanced predator bow” ability let you steer your predator arrows in the air for better accuracy.

The warrior tree’s overpower attack and charged melee both gave you additional options in combat.

Those useful upgrades were in the minority. The majority of the nodes on Origins’ three upgrade trees weren’t very useful or even noticeable. They gave passive damage upgrades and XP boosts, or increased protagonist Bayek’s proficiency in ways a player wouldn’t notice unless they’d been paying close attention.

“Parry” allowed you to, you guessed it, parry incoming attacks, which is as foundational an Assassin’s Creed ability as there is. 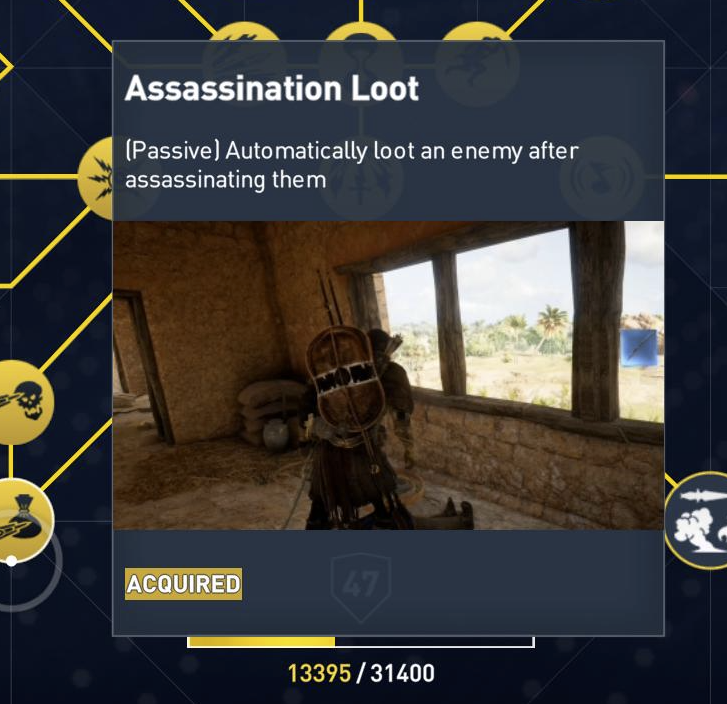 This is an ability you can spend points to unlock.

Of Origins’ 50 ability nodes, I would only call 15 or so actual abilities. That is to say, they’re distinct actions that you couldn’t perform before you unlocked the skill; actions with outcomes that affect gameplay in a distinct way.

As a result of that, levelling up in Origins was rarely exciting. Only a few times in my dozens of hours playing the game did I feel like I’d just unlocked an actual cool new action or ability. I mostly felt like I was manually helping along the sort of behind-the-scenes buffing and boosting that happens invisibly in most action RPGs. Great, now I get more XP for ability kills.

Hooray, I can now parry incoming attacks like in every other game in this series. Cool, I can sell items for a little more in shops. 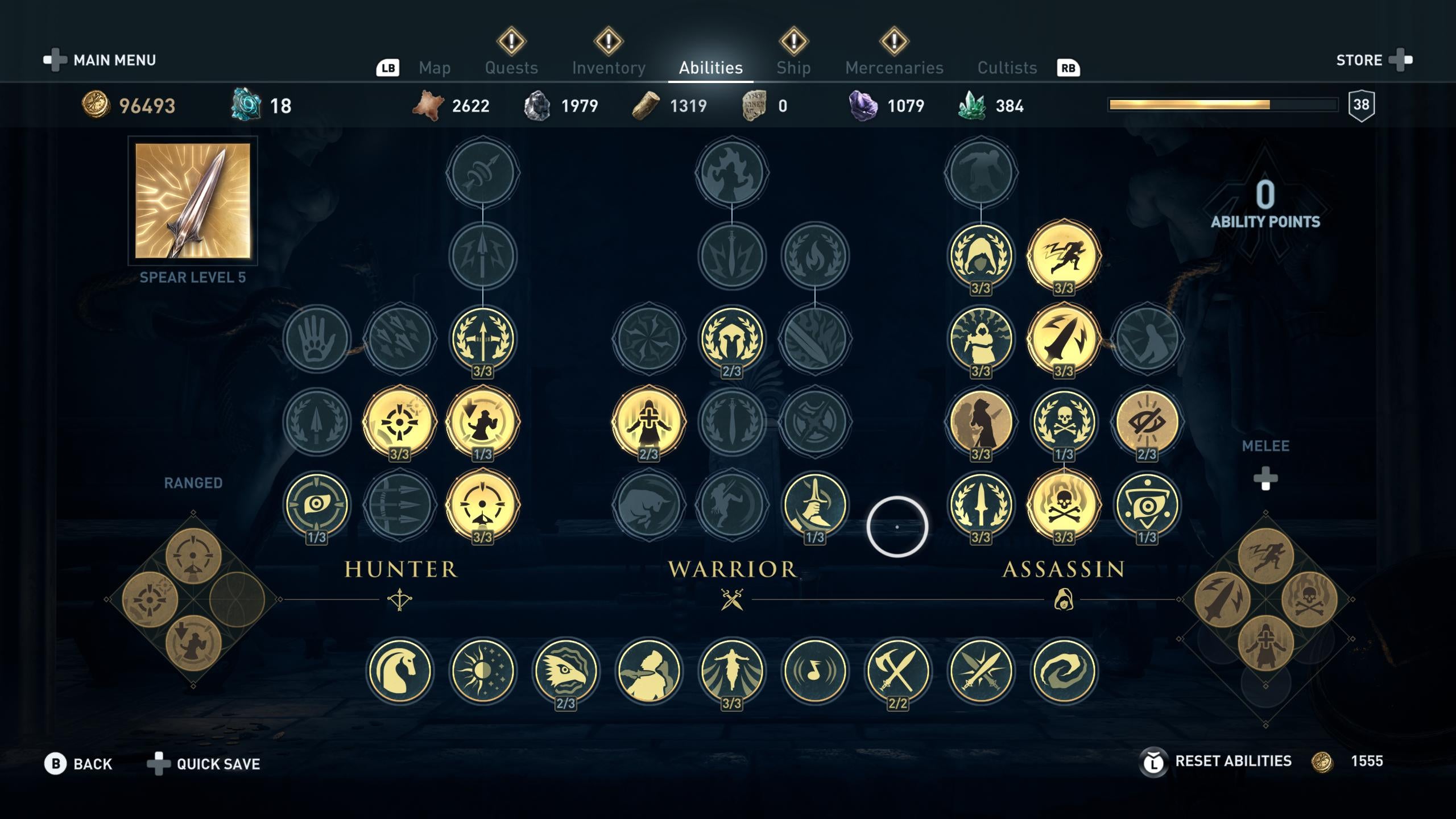 The fact that this cluttered-arse screen is still better organised than its predecessor says a lot.

Along the bottom of the screen is a fourth tree, called “baseline abilities.” Those skills are mostly unlocked from the start of the game, though some unlock or become enhanced as your character hits certain level thresholds. Unlike Origins, none of those abilities require ability points to upgrade.

Baseline abilities include things like calling your horse and meditating to pass the time, as well as the innate ability to parry attacks, which you had to unlock in Origins. Other abilities you had to use points to unlock in Origins are also folded into Odyssey’s baseline tree and unlock automatically over time as you play, like equipping a second melee weapon (which is on a simple level gate) or using your eagle to distract enemies (which unlocks as you synchronise more viewpoints).

Of Odyssey’s 35 unlockable abilities, 28 feel like actual abilities. Again, that is to say, they’re distinct actions that you couldn’t perform before you unlocked the skill; they’re actions with outcomes that affect gameplay in a distinct way.

In other words, almost every node you can unlock gives you an actual new move you can do, from slowing down time to firing multi-shot arrows to blinding your opponents in combat. Compared with Origins (50 nodes but only 15 or so meaningful abilities) Odyssey’s wheat-to-chaff ratio has been dramatically improved.

In another significant difference from Origins, all of Odyssey’s abilities can be upgraded two additional times past the initial unlock, each higher tier granting you more damage or other boons. At tier one, the healing ability gives you back a quarter of your health. At tier three, it gives you back half of your health and cancels fire and poison effects.

That means players actually have more places to put their ability points than they did in Origins, and more control over their build.

There are fewer baskets, but they’re deeper. Considered like that, Odyssey’s 35 ability nodes become 105. That, combined with the limited number of abilities I can have active on my character at any given moment (eight melee, four bow), has led me to feel much more specialised in my character build. 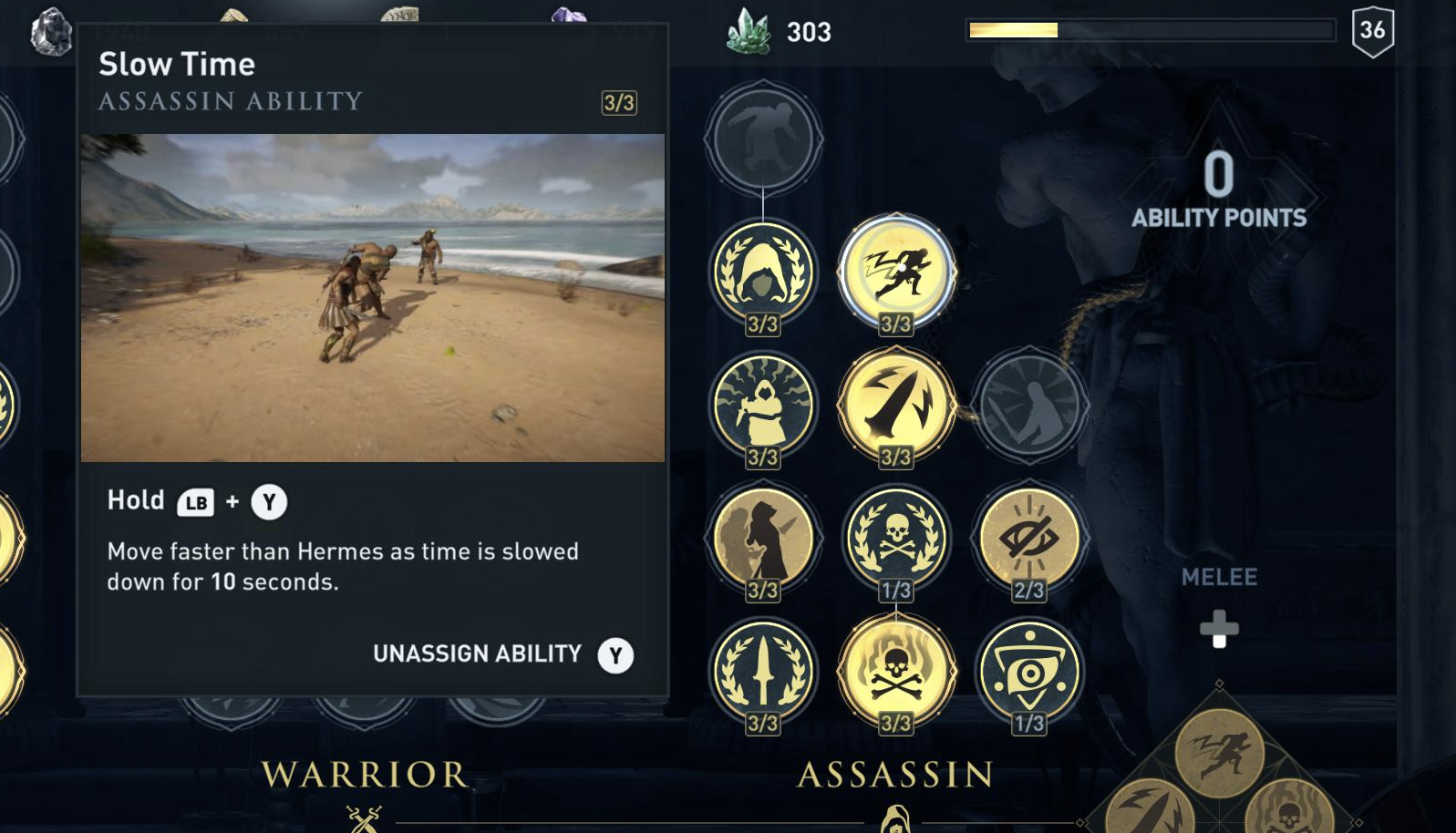 In yet one more small change, all Odyssey upgrades cost a single point, which means that each time you level up, you can go to the ability page and buy something.

In Origins, the best abilities cost two or three upgrade points, which sometimes meant you had to wait and “save up” to unlock something good. Odyssey’s abilities can also be unlocked in any order, with a few exceptions, another change from Origins’ gated layers.

All those small and large tweaks have a significant effect on the overall experience playing Odyssey. Levelling up feels exciting in a way it rarely did in Origins, particularly in the early stages of the game. I’m regularly unlocking new abilities, almost every ability is distinct and clear-cut, and the majority open up new gameplay options that are immediately apparent while I’m playing.

The different flow of upgrades—along with more obvious changes like branching RPG-style dialogue and in-world naval battles—are a big part of why Odyssey feels so different compared with Origins, despite their surface-level aesthetic similarities.

“If you’ve watched 30 minutes of this game,” I wrote in my largely positive review of Origins last year, “you probably have a pretty good sense of what the next 30 hours will look like.” One of the main reasons for that was how little Bayek’s abilities actually changed from the beginning of the game to the end. I wouldn’t say the same thing of Odyssey.

That’s still the case in a big-picture sense, as Odyssey mostly revolves around the same handful of core activities. But when I was 30 hours in, I had access to all kinds of abilities and gameplay options I didn’t have in my opening hours. I’m currently closer to the 50 hour mark, and at level 36 I still have new abilities and ability combinations that I’m looking forward to trying out.

I can also cheaply reset my skills for a little bit of in-game gold, meaning I can change up my character build anytime I please.

Ubisoft has been making open-world games for more than a decade. For all the similarities between each new Ubi megagame, each one also introduces its share of refinements and fresh ideas. For years, it seemed as though that meant each game would be bigger and more elaborate, with more regions, bigger maps, more types of gear, more kinds of gameplay, and more abilities to unlock.

Like with Far Cry 5, however, Odyssey’s ability tree has been cleverly pruned and re-worked to favour meaningful upgrades and specialised character builds. It’s a big improvement.