featureplaystation 4red dead redemptionred dead redemption 2rockstarrockstar gamesxbox one
To sign up for our daily newsletter covering the latest news, features and reviews, head HERE. For a running feed of all our stories, follow us on Twitter HERE. Or you can bookmark the Kotaku Australia homepage to visit whenever you need a news fix.

Red Dead Redemption 2’s excessively detailed world tries to suggest reality. Fall and you get covered in mud; while covered in mud someone might make a coy comment about how they hope it’s not shit.

The world is full of little flourishes and behaviours that suggest its NPCs are real people with genuine reactions. But the more I play, the more they feel like puppets putting on a show.

Red Dead Redemption 2 wants to draw the player into a sort of simulated (albeit overly romantic) version of ages past when the natural world bore less scars from industrialisation and people always had stories or tall tales to share. The world reacts to the player. Shoot someone in the leg and they might end up with a prosthetic the next time you see them. Leave a carcass by the side of the road and come back a few days to find bones.

The game’s natural world, with its detailed snow and character-affecting temperatures, strives to feel realistic. Even Arthur himself emulates a real person through his need to groom and bathe, while his slow gait seems an attempt to separate him from faster, video-y game contemporaries like Assassin’s Creed Odyssey’s Kassandra.

On the surface, NPCs aspire to the same level of detail, acting out what seem to be full lives. An angry saloon-goer tosses someone through the window for sleeping with his wife; a clumsy rider stops to calm their horse only to get kicked in the head.

These moments try to suggest the world is full of people going about their lives, but when contrasted with the rest of the game’s level of detail, they are woefully artificial. The seams start to show, and it’s obvious that Red Dead Redemption 2’s people only exist in relation to me, defined by what I can do them. 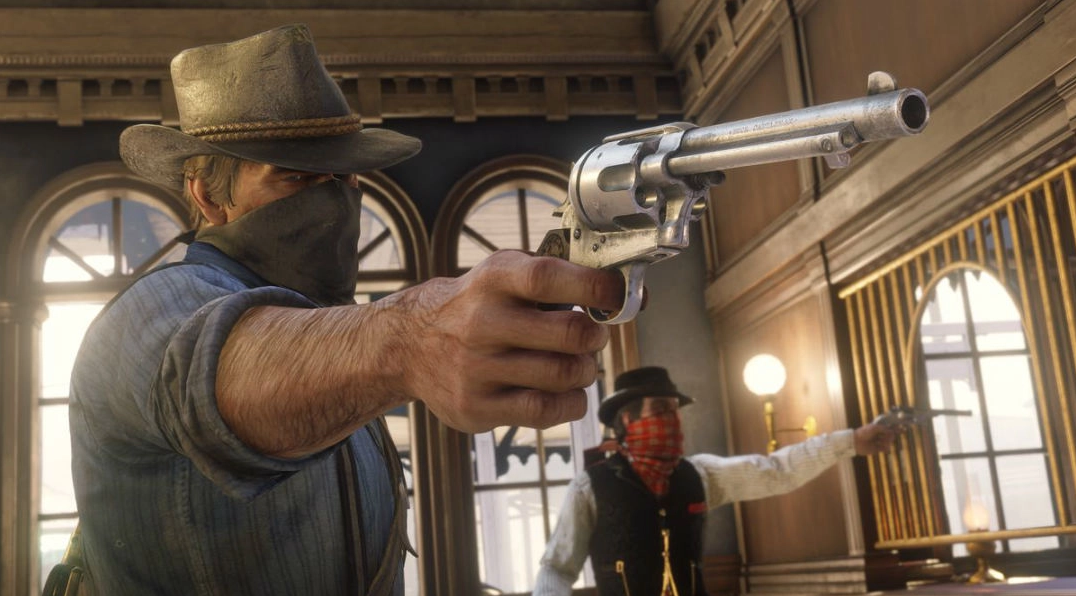 The game’s interactions are constrained due to its inspirations. Westerns are a complex and problematic genre tied to a violent history that gave rise to the myth of the gun as an egalitarian tool (e.g., the oft-quoted “God made man, Sam Colt made them equal”) and rugged, self-reliant masculinity. As a result, interactions with Red Dead Redemption 2’s NPCs exist within that masculine framework.

Arthur and the player’s actions are expressions of a mythic masculinity. We rescue women and lesser men—after all, better men would be able to fight off bandits and manage their horses – and compete against would-be gunslingers while using unique abilities like Dead-Eye to our advantage. We tip our hat like a proper gentleman, and we kill anyone we want.

The game rewards those masculine impulses. The Western framework leads to only certain kinds of interactions, and those interactions inevitably lead to rewards: outshoot someone in a marksmanship contest and you’ll gain some cash; rescue a man from wolves and he’ll give you a treasure map.

These rewards further stress that, in spite of Red Dead Redemption 2’s meticulous details and animations—created through excess, condemnable hours and strenuous labour – the NPCs just exist for the player’s benefit.

HBO’s Westworld – whose core conceit is that people can attend a theme park of Wild West role-playing android “hosts” who offer unique adventures—mocks this conceit in a scene in which one of the park’s artificial workers falls off his horse.

When a human protagonist, William, comes to his aid, the host tries to entice him with tales of a treasure map and lost riches. William’s companion dismisses the prospective adventure as a transparent park narrative. It’s kiddie stuff, a blatant attempt to pull park guests into side activities and storylines crafted for their amusement.

And yet, in Red Dead Redemption 2, these scenarios play out with little irony. The game’s details are meant to evoke wonder, and these NPC interactions seem meant to suggest a bigger world full of secrets and adventures. But those adventures are constrained, always coming back to rewarding the player. What a deep and rich world, to have such people and such adventures on every ridge and road! Yet they pale in comparison to the game’s other details, which makes them feel even more unreal. 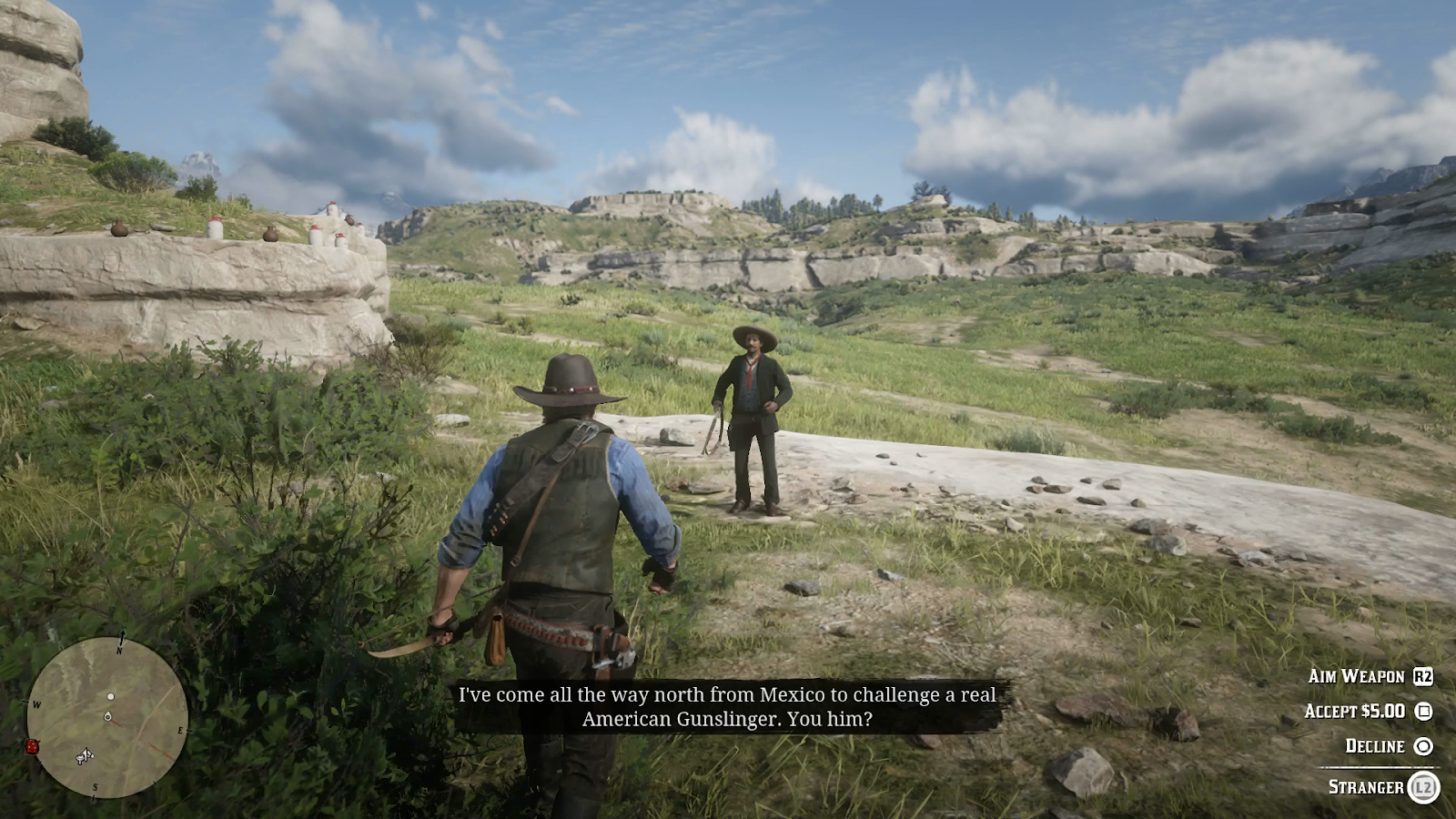 One time, while riding through the plains, I heard a man crying out in fear. He was going to die, dammit. Please won’t someone help him. As it turned out, he was bitten by a snake. I could leave him, I could suck out the venom, or I could give him medicine. I opted for the latter, and we then parted ways.

Nearly five hours later, I heard the man call out to me while I was walking around in the town of Valentine. He was sitting on a shop’s porch with his friend.

Why, wasn’t it wonderful for him to see me, his saviour, again? He was so delighted that he offered to pay for whatever I wanted in the gun shop. I bought a Springfield Rifle and scope; it’s perfect for hunting deer.

This encounter meant to give my actions consequences, but the reward and the scripted nature of our interaction rang false. For all of Red Dead Redemption 2’s attention to detail, this NPC wasn’t an entity who existed before I found him.

He was spawned in as I came near, solely to be rescued by me, and then again to reward me for it. Red Dead’s characters are always leading you somewhere, instead of just being people. Enemies are magically summoned for me to gun down; I’ve watched them blip into existence on my radar during certain events.

NPCs exist in orbit of the player, for the player. As a result, Red Dead Redemption 2’s open world often captures the beauty and detail of real spaces, but it never emulates a functioning society. How can it, when these people exist to serve me and when I can decide to kill them with the single press of a button?

I avoid towns more often than not in the game. I get too distracted by the animatronic people and their play-acting lives. Perhaps I’ve been playing games so long that I can’t help but see the puppeteer’s strings. When I’m out in the forest or riding on the plains, things seem calmer. Red Dead Redemption 2’s detailed environments are intoxicating enough that I forget myself for a time.

But that silence always breaks. Suddenly, there are broken stagecoaches passengers on the side of the road, hillbilly ambushes, or a man caught in a bear trap. The world doesn’t want me to forget all the things I can do it or all the riches its characters want to give me.

There’s so much content out there, all for me, that the game can’t help but summon its theme park actors and crafted set pieces.

After all, the greatest crime I could commit would be to miss them.