assassins creed odysseyfeature
To sign up for our daily newsletter covering the latest news, features and reviews, head HERE. For a running feed of all our stories, follow us on Twitter HERE. Or you can bookmark the Kotaku Australia homepage to visit whenever you need a news fix.

A day after apologizing for surprising Assassin’s Creed Odyssey players with a mandatory in-game relationship that seemed to contradict the game’s pre-release promise to let players define their character’s own sexuality, the game’s creative director offered a fuller apology and explanation of what his team was trying to accomplish and what they got wrong.

“Reading through player responses [to] our new DLC for Legacy of the First Blade, Shadow Heritage, we want to extend an apology to players disappointed by a relationship your character partakes in,” Odyssey creative director Jonathan Dumont said in a post on the game’s forums. “The intention of this story was to explain how your character’s bloodline has a lasting impact on the Assassins, but looking through your responses it is clear that we missed the mark.”

He went on to say that players will not have to continue the romantic relationship in the next installment of the game’s DLC, saying the developers wanted players to have the option of deciding that their character choice to procreate was a utilitarian decision rather than a romantic one.

The plot development occurs at the end of the second chapter of a three-part paid expansion and constitutes a spoiler for those who haven’t played the game. Kassandra with the scripted father of her child.

At the end of the DLC, the player’s character decides to enter into a relationship with either the daughter (if they’re playing as Alexios) or son (if they’re playing as Kassandra) of the proto-Assassin Darius. They then have a child. As Kotaku writer Heather Alexandra noted yesterday after playing through the DLC, the player can rebuff the romantic advances of Darius’ kid but they’ll still wind up in a relationship and have the baby. 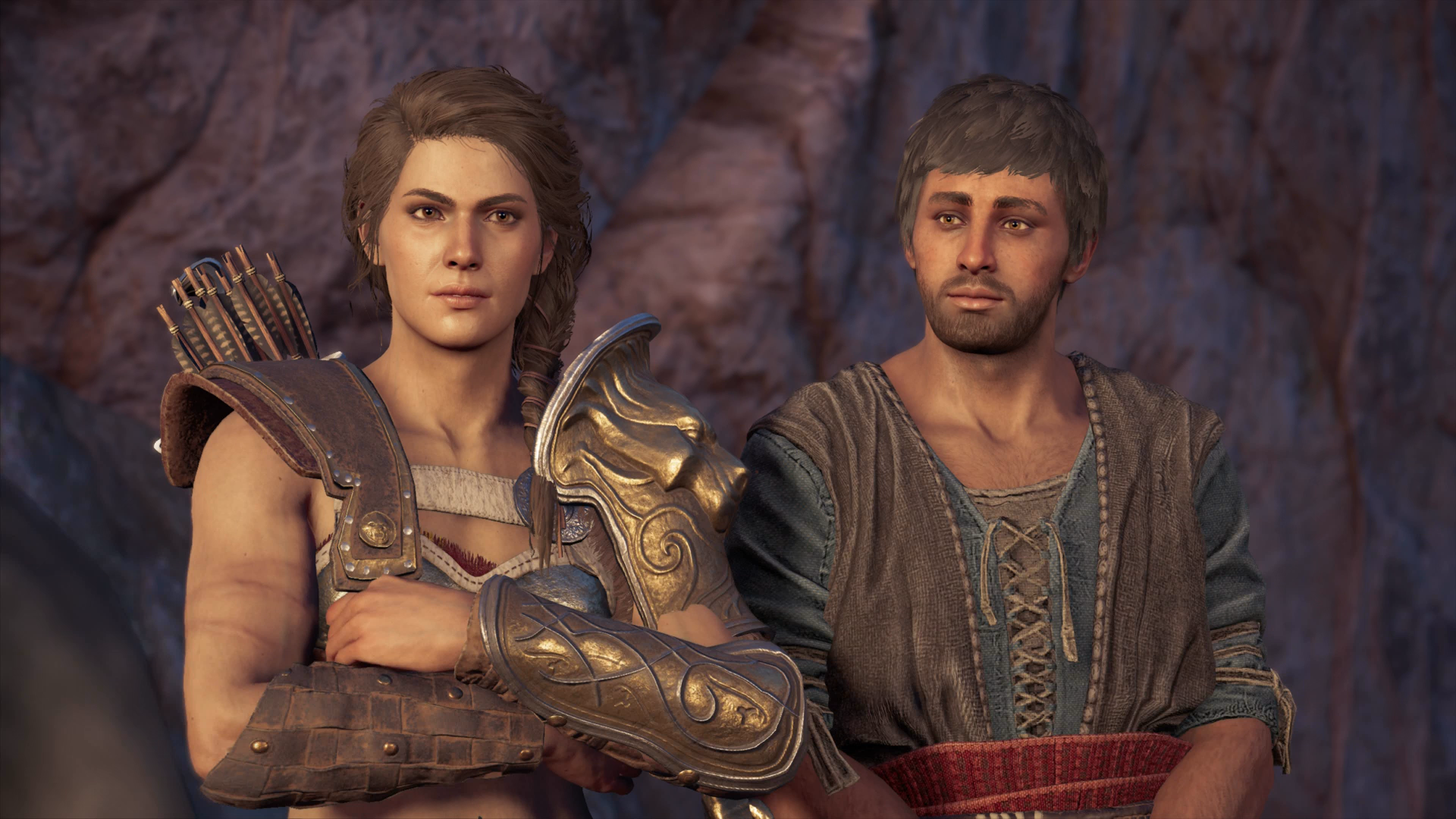 Kassandra with the scripted father of her child.

This seemed to contradict the repeated push by Odyssey’s creators in advance of the game’s October release to portray the game as an adventure so malleable that players could choose their own romantic partners, male or female. In a quote that’s been given new life in the past day, Dumont had told Entertainment Weekly: “Since the story is choice-driven, we never force players in romantic situations they might not be comfortable with.”

Many Odyssey players were upset by the DLC twist, and a lengthy thread on the game’s subreddit filled with people expressing hurt over a seemingly broken promise. One wrote that she is gay and felt like she was being punched in the stomach. On Twitter, people who saw Kotaku’s coverage complained that a game that had made them feel included now felt like a lie.

In a statement yesterday, Ubisoft referred to the relationship twist as part of a “set story” and then hyped the next chapter of the DLC: “Without spoiling it, you will engage in an important relationship as part of a set story. The motivation behind this relationship is yours to explore in game and will be reflected in your character’s story arc. There is one episode left in Legacy of the First Blade which will tie your character’s actions together.”

Today, Dumont skipped past any spoiler worries and product hype and offered a clearer explanation of what the team was going. For those who won’t get the reference, the other characters he mentions are the two people who raised the game’s protagonist:

Alexios/Kassandra realising their own mortality and the sacrifice Leonidas and Myrrine made before them to keep their legacy alive, felt the desire and duty to preserve their important lineage. Our goal was to let players choose between a utilitarian view of ensuring your bloodline lived on or forming a romantic relationship. We attempted to distinguish between the two but could have done this more carefully as we were walking a narrow line between role-play choices and story, and the clarity and motivation for this decision was poorly executed. As you continue the adventure in [the] next episode Bloodline, please know that you will not have to engage in a lasting romantic relationship if you do not desire to.

We have read your responses online and taken them to heart. This has been a learning experience for us. Understanding how attached you feel to your Kassandra and your Alexios is humbling and knowing we let you down is not something we take lightly. We’ll work to do better and make sure the element of player choice in Assassin’s Creed Odyssey carries through our DLC content so you can stay true to the character you have embodied throughout.

A Ubisoft rep confirmed to Kotaku that the content of the second DLC will not be changed but said that the next chapter of the expansion will “make the character development and choice much more clear to players, and that is where they will be able to decide how they want to handle their relationship now that they have ensured that their bloodline will continue.”

But they said that the trophy/achievement players receive after their character has a child will be renamed, given that some players said that it implies that being gay or not having a kid or both is just a phase of being young. They passed along a statement from Dumont about this: “It was definitively not written with that intention. This was an oversight in the review process and we very regrettably missed it. We share the frustration of players who find this offensive and the achievement/trophy name will be changed when DLC 1.3 patch is available.”

There are also some players who were unbothered by the DLC’s plot development. Some of those people are the predictable sort who’ll mock any discussion of inclusivity or offence. Others focused on the idea of authorial intent or even the traditions of older Assassin’s Creed games to require that the historical protagonist has a biological descendant in order for modern-day characters to relive their lives through the Animus device—the conceit that what players mostly play is happening in the Animus. The creative freedom argument must contend with the developers’ own promises to its player base. As for the rules of AC? They’re bent all the time and recent games in the series, including Odyssey, have featured Animus tech that doesn’t require descendants.

Update: This story has been updated to incorporate comments from Ubisoft PR and Dumont about whether the DLC will be changed (it won’t) or if the “growing up” trophy/achievement for engaging in a straight relationship and having a kid will be renamed (it will).