There are a lot of comic books featuring Spider-Man out there right now. Peter’s going on amazing adventures, wrapping up spectacular tales, and, well, there’s actually not a whole lot of time for him to be a truly friendly neighbourhood spider-guy.

Marvel Comics’ Friendly Neighbourhood Spider-Man #1 does a great job of correcting that — but it’s also laying the grounds for a potentially huge shock to Peter’s world.

Written by Tom Taylor and featuring art from Juann Cabal, Nolan Woodard, and Travis Lanham (accompanied by Marcelo Ferreira, Roberto Poggi, and Jim Campbell in the backup story), Friendly does a pretty grand job of keeping Peter out of the heady skies of epic supervillain attacks and saving the world along with the Avengers and what have you, firmly rooting things in the immediate world of his own neighbourhood.

It allows Friendly to weave itself nicely around the grander adventures you can find in its sister book, Nick Spencer and Ryan Ottley’s Amazing Spider-Man, but still tell stories—stories that are of course still “canon” to the current prime Marvel Universe—that matter deeply to the ongoing life of Peter Parker.

It’s a book that opens with him saving a car from going off a bridge, only to offer tips on rush hour traffic to the family he’s rescued as they move into Manhattan. Peter’s primary concerns aren’t whatever dastardly plans one of his cadre of major villains has to ruin his entire life/destroy the city/rule the world, but things like making sure he’s on time to help an elderly neighbour cart her groceries up to her apartment, or why the hell one of his arsehole flatmates keeps swiping his underwear. 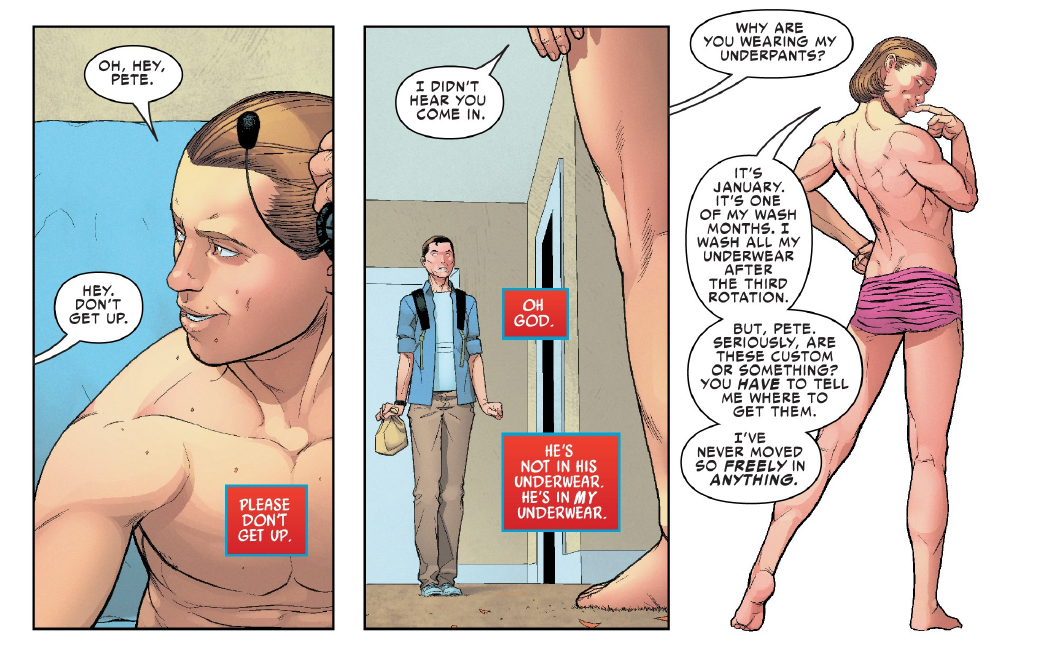 Even when the scale of the issue escalates, it’s still rooted in the personal, small confines of Peter’s apartment building. Like when a skittish new neighbour he goes to check in on finds herself the target of some serious criminal thugs, who ultimately deck poor Peter unconscious and kidnap her, leaving behind two superpowered kids.

At its biggest, Friendly Neighbourhood is telling a story about…well, a neighbourhood. The friendliness ebbs and flows, but the scale is intimate and measured in a way we’ve not seen on the regular from other Spider-Man books, which are more focused on delivering those bigger, grander-scaled, and action-packed adventures.

But Spider-Man is a hero who truly thrives in this kind of small-stakes personal drama. It’s one of the reasons the character has endured for decades and decades; his earnest heart and real-world problems grant Spider-Man both a human relatability and the transformative power to become a mantle that can unite people from all walks of life.

Any one of us can be Spider-Man because as it turns out, Spider-Man goes through the same things we all do (though hopefully your roommate doesn’t share your underwear).

Those can be silly things like unruly flatmates, or apartment block woes, but they can also be hugely, deeply personal moments — and that’s where Friendly Neighbourhood Spider-Man tosses a major wrench into the works. 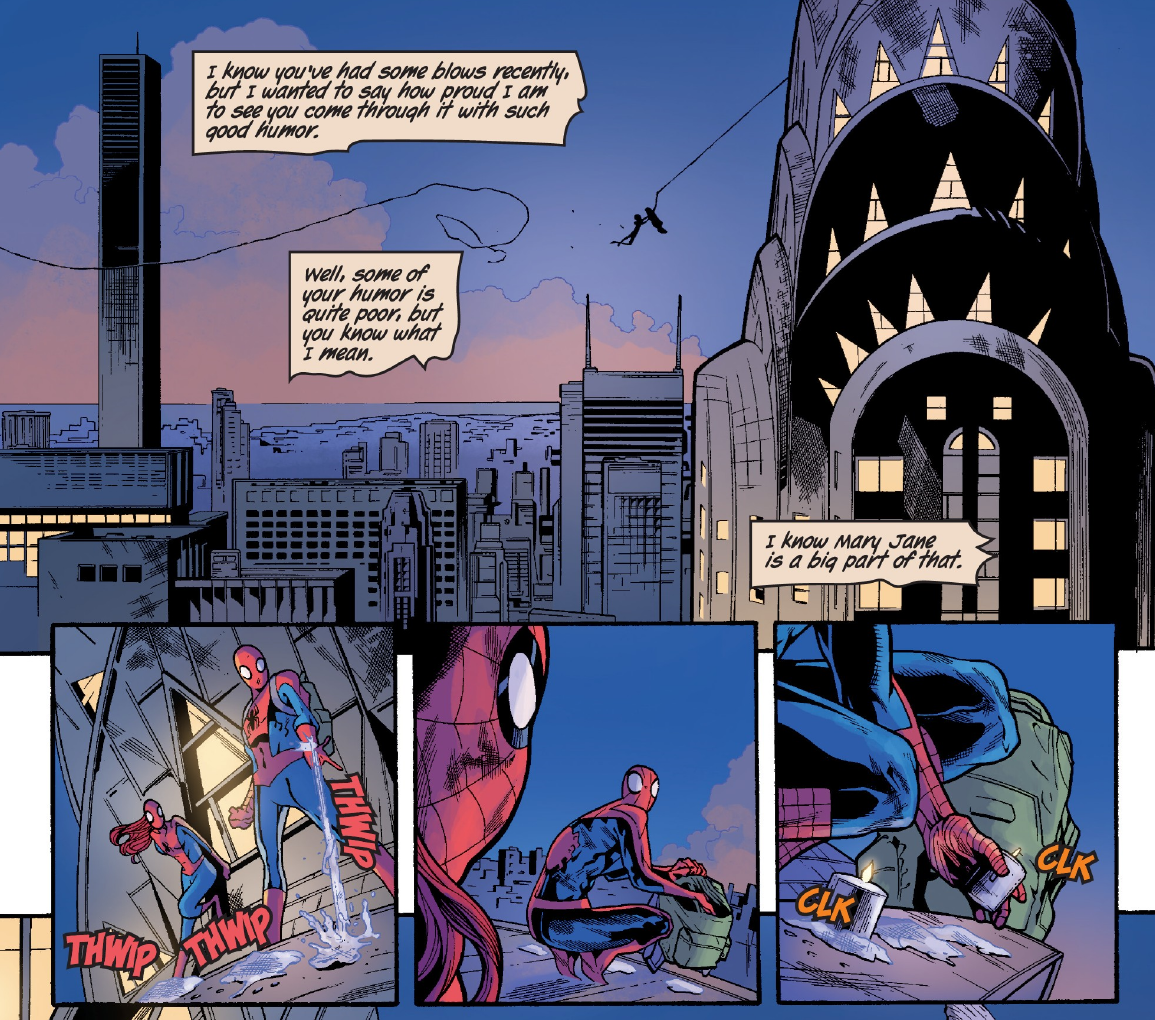 The first issue concludes with a small epilogue, framed as being narrated by a letter Aunt May is writing to Peter, as we watch him go about his amazing, spectacular, and sensational spider-life. He has a romantic date with MJ, he stops some teens from bullying a little kid, and in the meantime, happens to notice that there’s something his aunt hasn’t been telling him. But before he can follow up on it with a bit of Spider-powered stalking, his hectic superhero life drags him away.

And so it’s only the reader that learns she’s been going to the hospital for checkups — and didn’t want to worry her nephew, who already has the world (and occasionally several others) on his shoulders. Except now what was a routine precaution has snowballed into something bigger: May has cancer. 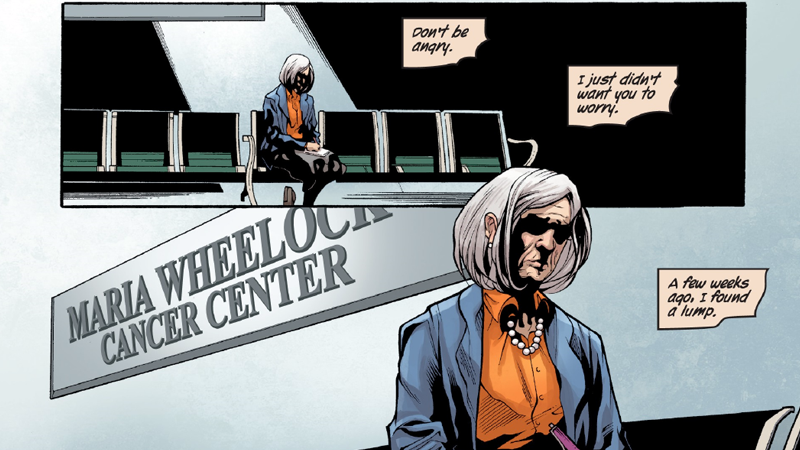 It’s a powerful moment, not just for its intimacy but because it seemingly sets up what is going to develop into a major, personal story across the Spider-books, as important to the life as Peter Parker as any world-ending threat or supervillain romp could possibly be, that timeless duality of what makes Spider-Man, Spider-Man.

We don’t know for sure how it’s all going to play out of course—this is a last page reveal in a debut issue, so maybe after treatment and surgery or whatever else May will go through in the coming months, she’ll be given an all-clear and be on with her life. But maybe she won’t — and we all remember what Peter Parker went through the last time his beloved Aunt was facing her end.

Given that he only just recently got back together with Mary Jane for the first time since he literally sold his marriage to the devil, could Peter be facing an infamous “One More Day” scenario again sometime this year?

Given how well it went down the first time (spoilers for those unfamiliar: not well at all), maybe this time instead of losing the love of his life again, he’ll ultimately lose his beloved aunt. Last year might have been the year of the Spider-People, but 2019 is already shaping up like it’s gonna have some life-changing moments for Peter Parker.