There are nearly 60 years of Spider-stories out there at this point, across comics, TV shows, movies and games, all in their own ways advancing the rich web of character arcs that have made Spidey endure as one of the world’s greatest superheroes. But this week’s Spectacular Spider-Man offers the simplest reminders as to why: Peter Parker’s just a good kid.

Peter has navigated secret sibling drama, time travel, and even heartbreak with one of his greatest rivals. But #310 sees Zdarsky bring his time with Spider-Man to a close as a solo writer/artist (with lettering from Travis Lanham), telling an intimate story about just what Spider-Man means to the people of New York.

Framed around a documentary project peppered with vox populi-style interviews, Spectacular Spider-Man #310 runs through the wild gamut of public opinion that has hounded Peter ever since he donned the Spider-mantle all those years ago.

He’s weird! He makes too many jokes! He saves lives! He gets in the way of the police! He makes a mess! He’s a threat and/or menace! He’s good! He’s bad! He’s kind of desperate for… free hot dogs! 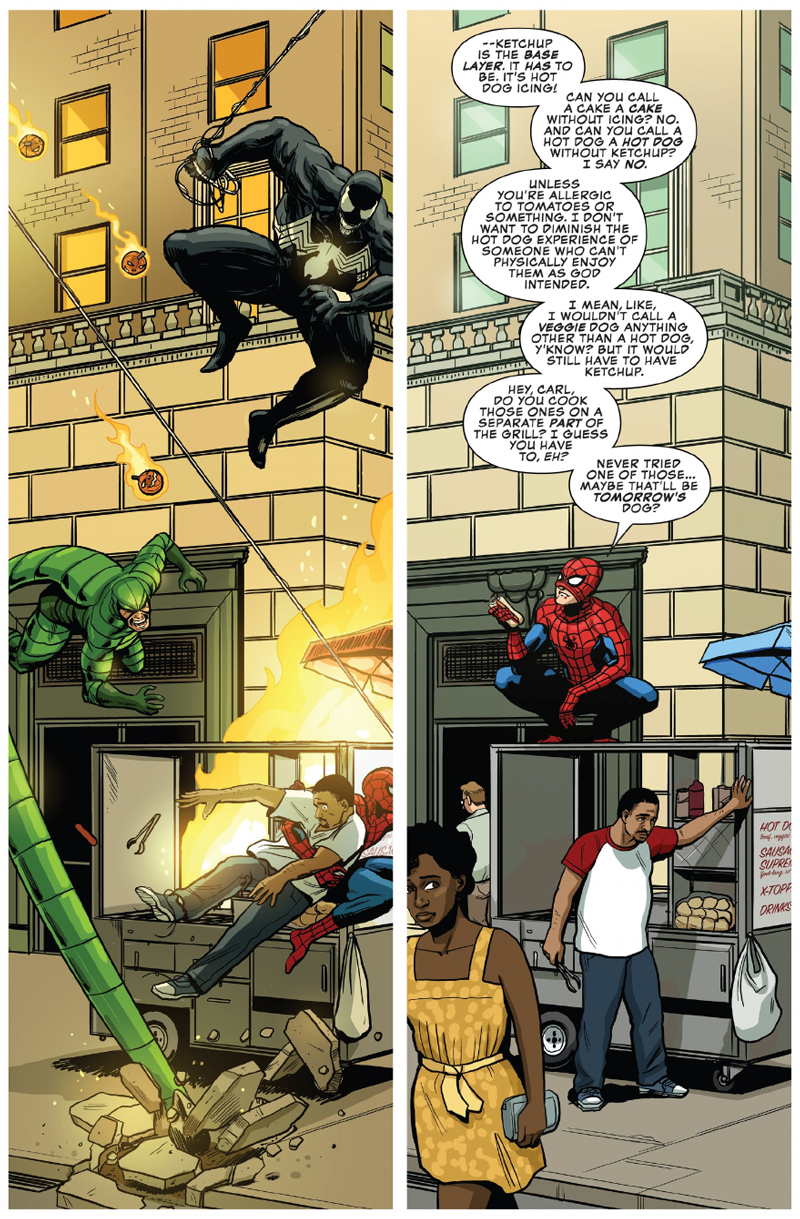 In most of these interviews, Zdarsky gets to inject a bit of that classic Spidey humour, like the aforementioned hot dogs. But the issue primarily stays with the recollections of one interviewee in particular: A young mother who will never forget what Spider-Man did for her son, Kyle.

Spider-Man first encountered Kyle while chasing down some robbers, and realised that one of the seemingly nefarious goons he was trying to apprehend was just a young kid — pressured into being a lookout for the actual robbers — who didn’t need webbing up and being handed a permanent arrest record. So Peter let him go.

But Peter Parker is who he is, and that means that he will never stop going the extra mile to help people. So he starts visiting Kyle at home, helping him with his homework — and as Kyle’s mother attests in her interview, her son was put on the right path by the chance Peter gave him, growing into a better, kinder person.

That is, until tragedy strikes: The two robbers Peter nabbed get out of gaol, find Kyle, and kill him. And Peter only finds out because he goes to Kyle’s place to help with his studies, only to discover that Kyle isn’t there. 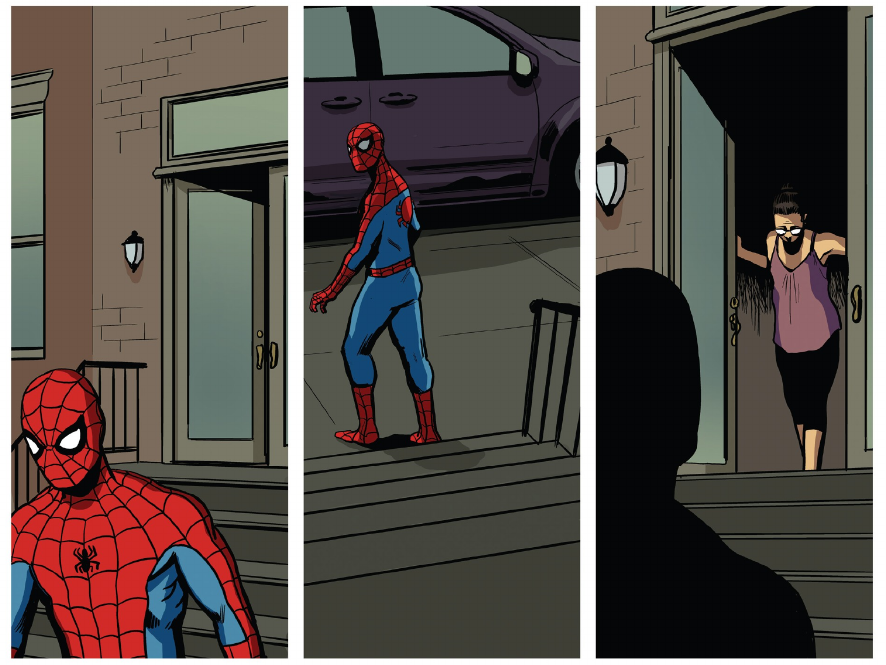 Most other heroes would’ve moved on after the initial event — what’s one life saved against the thousands upon thousands they save day in, day out? But that’s what’s always made Spider-Man so relatable and personable — he follows up, he’s always there for people, always ready to help even with things that aren’t life-saving acts of heroism.

Sometimes, that also means dealing with the tragedy that even Peter Parker, the man that goes beyond time and time again, can’t save everyone.

Peter gets some level of revenge, chasing down Kyle’s killers and re-apprehending them before allowing himself a moment to break down and grieve. But then Spectacular Spider-Man #310 carries on. There’s a little more story to tell, a few more revelations about the people Peter Parker goes on to help, and why the documentary framing the issue exists in the first place.

But there’s a final bit of vox populi from none other than Peter himself, caught on camera by the documentarian in a moment he isn’t in his Spider-suit — and Zdarsky, through Peter, hits home with the perfect thesis on what makes Spider-Man the hero he is: 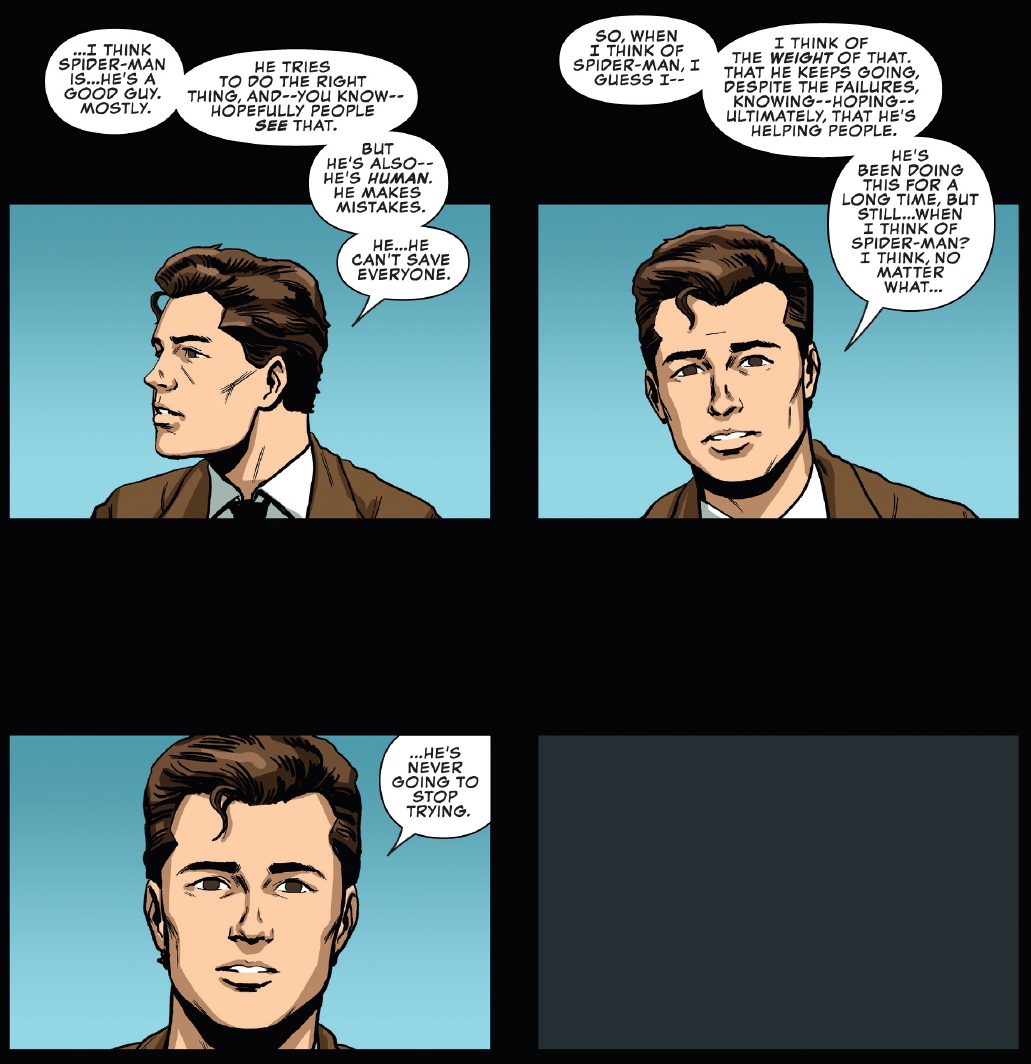 Spectacular Spider-Man will continue with a new creative team, but Zdarsky’s run on the series has served as a perpetual reminder of the great heart behind the quips and thwips that we all love about this goofball who ping-pongs around New York in red and blue spandex. At its very best it has struck at Peter at his most vulnerable, making an example of the earnest kindness that makes him stand up time and time again in the face of insurmountable odds.

Peter Parker can grow and change over decades of stories, and across multitudes of reboots. But Spectacular Spider-Man #310 highlights the one thing that never will: He’ll forever be that good kid from Queens who never stops trying to do his best.