Six Hours In, Anthem Has A Lot To Love

I’ve played about six hours of Anthem, a game where players fly around in mechanical suits blowing stuff up in search of ever more rare loot, and while I’m still getting my bearings I already feel a lot better about the game than I did back during its two demos.

The game launched earlier today on PC for Origin Premier subscribers and on Xbox One as part of a 10-hour trial through EA Access, with a full-launch for non-subscribers and PS4 players on February 22.

Unlike the two demo sessions earlier this month and last, I haven’t gotten disconnected from the servers or experienced any bugs on the scale of the never-ending loading screen.

Load times are still a nuisance and I wish developer BioWare had done something to make them less noticeable and boring than a bar slowly filling up above a still image, but at least they’re not broken. There have been occasional graphical glitches, but nothing that lasted for more than a second or in any way interrupted what I was doing. So far, Anthem works.

It’s also a lot of fun. The core of Anthem is flying through ancient caves and jungles dotted with ruins, and that part of the game could not feel any better.

Punching the left analogue stick to turn on forward thrusters or the right one to gracefully hover in place is easy and responsive but full of complementary camera effects and richly layered sound effects that really convince you you’re controlling a sentient rocket.

Even if Anthem were just a fantasy-infused flying sim, it would still be a ton of fun. But of course there’s a lot more to the game than just flying around. Anthem revolves around getting missions from the people in your hub, a city called Fort Tarsis; going out into the big, bad, dangerous world to complete them; and then returning and using the loot you collected to upgrade a mechanical suit, also known as a Javelin.

You can play as part of a group of up to four players or alone, though some of the missions really are built for teamwork. Happily, Anthem offers automatic matchmaking for everything.

One of the big questions facing the game prior to release was whether it would have any meaningful story beyond a few wacky sci-fi premises strung together to explain why you were flying around a strange world in robot armour. While the narrative does take a back seat to everything else going on in the hours I’ve played, it does exist.

Playing as a freelancer, a class of warriors tasked with protecting humanity from deadly forces of nature brought about by mysterious artefacts, you become entangled in a plot to stop a particularly ruthless faction called the Dominion from obtaining special artefacts that could be used to do any number of terrible things.

Based on what I’ve seen of it so far, it doesn’t have anything as complex as the political conflicts and intrigue at work in any of the Mass Effect games. Instead, it’s more in line with the Destiny games’ clear-cut drama around good vs. evil, and it’s decent enough with a world that feels somewhat more lived-in than Bungie’s series.

Where Destiny’s hub, the Tower, is located up in the clouds and feels somewhat like a dream, Anthem’s Fort Tarsis feels more like a giant, greasy car repair shop with a bar inside it. I have no idea what the people in Anthem smell like, but I’m absolutely sure they smell like something. 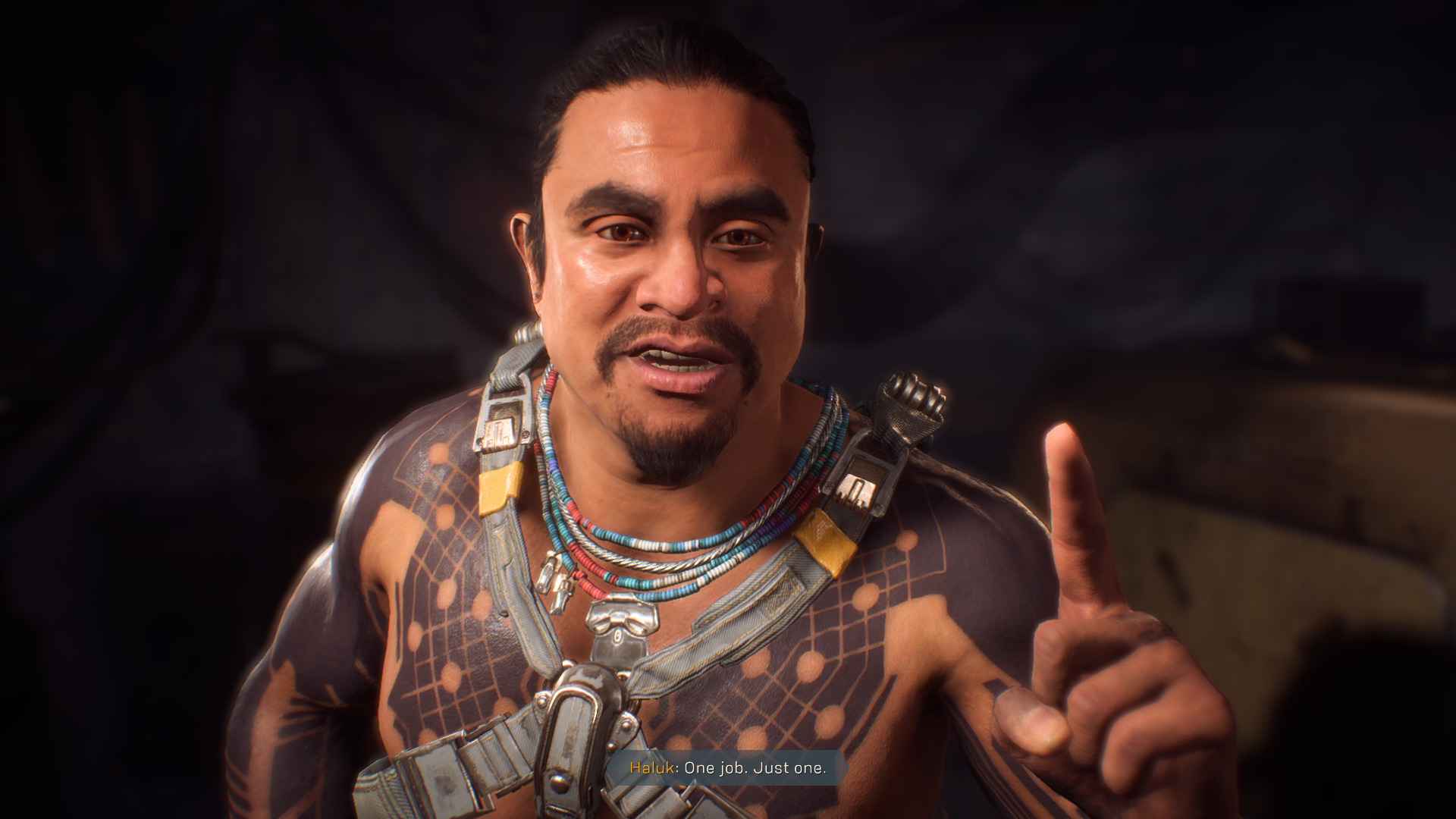 The game’s otherwise straightforward plot is also helped out a lot by a cast of extremely well-voiced and well-acted characters. Motion-capture is the basis for a number of the performances and it shows, with small winks, bitten-lips and idiosyncratic mannerisms helping to set each person apart.

You can see this in characters such as Owen, a side-kick who helps guide you over the radio during missions. He’s charming, scrappy and way out of his depth.

So far Neeson Giles is my favourite, even though I only spoke with him once and the conversation didn’t go very well. A loser who just wants to hang with the cool kids, Giles told me Owen was weird and unstable before backtracking after realising he’d clearly offended me to say he’d only heard other people say that Owen was weird and unstable. He then proceeded to say we should hang out again sometime, before eventually begging me to hang out again sometime.

I have no idea if Giles will play an important part in the main storyline or if he’s just there to add flavour. Maybe he’ll have an interesting set of missions for me at some point. I could have easily just walked past him and never met him at all. Did I mention he’s voiced by Brooklyn 99’s Joe Lo Truglio?

Though I’m running the game on medium settings to keep the framerate up thanks to my under-powered GTX 970, it still looks crisp and detailed, especially considering all of the action. Despite all of the flying around and almost non-stop explosions, everything has run smoothly.

The few times I’ve slowed down to push my settings to the max to take in how the light peers over a ridge or bounces off the ripples in a pond, I’ve been really impressed. Even when the environments start to run together and feel repetitive, their size, scope and detail are breathtaking. 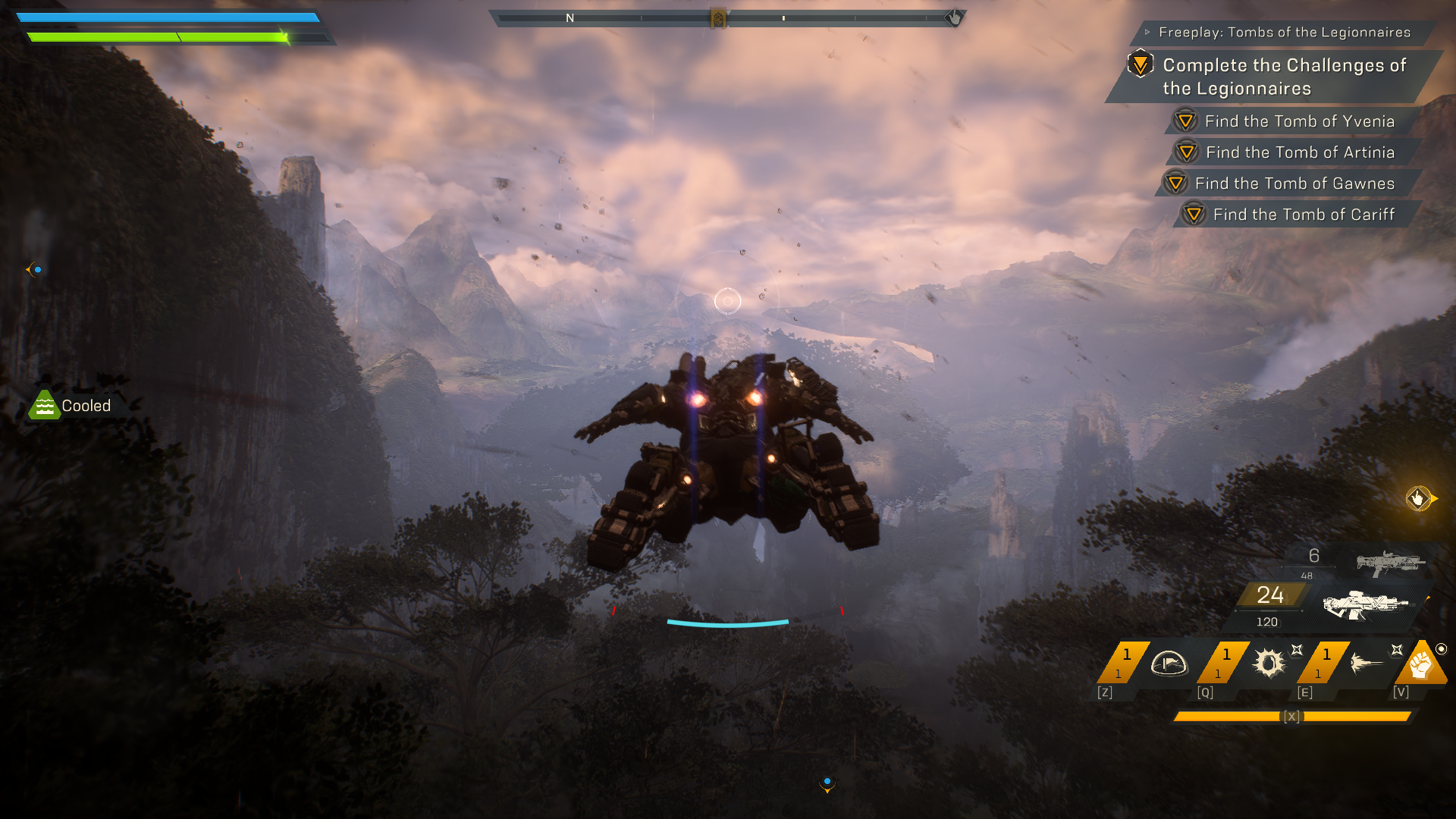 Of course, the real challenge for a game such as Anthem is whether it can still feel almost as exhilarating after 100 hours as it does after six. Even now I have concerns the breadth and diversity of enemy encounters and mission types.

Almost to a one they’ve consisted of some version of a spherical arena space that requires slow, methodical circling. When I end up in a tight spot, I fly out of range and then begin a new sweep. The mission objectives have so far been simple, consisting of either holding down a point or collecting orbs to activate an artefact.

Enemy AI doesn’t help either. On more than one occasion I’ve seen enemies standing completely still, or turning around and showing their backs, exposing their weak points to me, for no particular reason.

Given all of the powers and mobility at the player’s disposal, Anthem seems to try and make up for these slip-ups by giving enemies a good chunk of health and throwing a ton of them at you.

In the end it can all feel a bit chaotic, more like a free-for-all than a tightly wound shootout than forces you to actually consider strategy and tactics.

I’ve only completed about a dozen missions so far including one stronghold — a longer dungeon that’s made for a party of four players and features a boss at the end.

As I unlock more abilities and equipment, I’m hoping the game’s encounters will change things up as well, beyond just offering me higher difficulties to complete all the same old missions on. I haven’t yet found one I would love to run again just for the hell of it.

For now, there’s plenty of other things to keep me coming back.