Welcome back to Gaming Shelf, io9’s column all about board games and tabletop roleplaying games—focusing on that cool genre stuff we all know and love. This past weekend Toy Fair took place in New York City and several board game companies and distributors showed off their latest games and upcoming releases. Here are some of the coolest things we spotted at the show.

Note: Australian availability for the games below isn’t available yet, although you can always have them shipped from the United States if you’re keen enough. 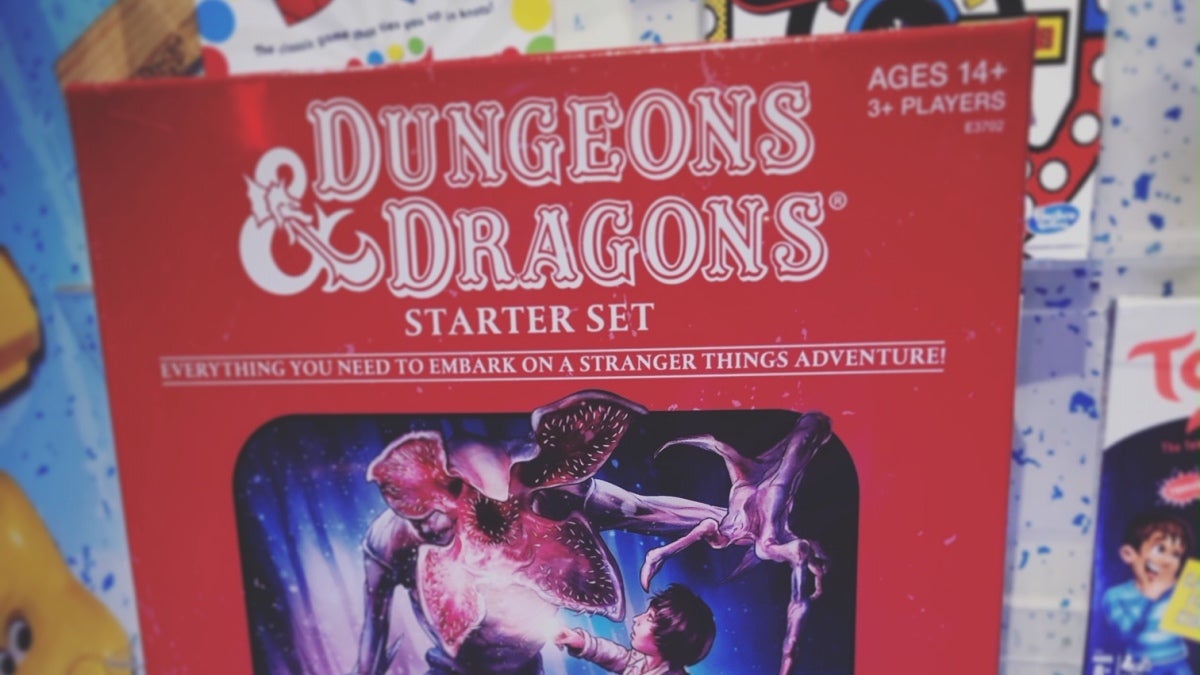 Hasbro was fully embracing its inner geek at this year’s Toy Fair showcase, with Dungeons & Dragons taking center stage in its board gaming and tabletop RPG section. The coolest arrival had to have been the Stranger Things Dungeons & Dragons Starter Set, which recreates the roleplaying game from the first season that started it all.

The game comes with a manual “written” by Mike Wheeler (Finn Wolfhard), which contains cool hints and tidbits about the series, as well as figures and dice. The game is currently available for preorder, and will be released on May 1. Stranger Things 3 arrives July 4.

Also on display from Hasbro was this latest Game of Thrones Monopoly game, which was originally announced last November.

I’m normally not a fan of speciality Monopoly games, but I was into this Game of Thrones version for one reason and one reason alone: The Iron Throne card holder, which sits on its own pedestal and plays music from the show. I’m a sucker for that stuff. Game of Thrones Monopoly is in stores now.

Grisly ghouls from every tomb, are closing in to seal your doom. Over the weekend, Ravensburger announced it’s single-handedly saving the Dark Universe (not really) with Horrified: Universal Monsters, a cooperative strategy game where players work together as villagers to defeat several of Universal’s most famous movie monsters.

Creatures include Frankenstein, the Bride of Frankenstein, the Wolf Man, the Invisible Man, and the Creature from the Black Lagoon. And, of course, Dracula. Horrified comes out in August and you can check out more on that in the below post.

Universal’s plan for a “Dark Universe” of films connecting all its monsters may be kaput, but there’s new life in the franchise with Leigh Whannell’s recently-announced Invisible Man project. And thanks to a new board game, you can soon build your own shared universe of monsters on your coffee table. A closer look at the Evil Queen, one of the new characters for Villainous. (Photo: Ravensburger)

Villainous: Wicked to the Core

Thanks, Disney, now I have that Descendants song stuck in my head. Ravensburger has expanded the Villainous board game saga with Wicked to the Core. The expansion adds Hades, Dr. Faciliér, and the baddest queen of them all, the Evil Queen.

Ravensburger says the expansion can be played alongside any of the other characters in Villainous, but it also can be played by itself. I gave it a try with some friends recently, and I played as the Evil Queen. I’m not saying she’s the reason I won the game…but her total awesome wickedness didn’t hurt. Wicked To The Core comes out March 3.

Also from Ravensburger, the coolest game where you get to play the bad guy. The Jaws board game has players take on the heroes trying to take down the mighty shark terrorizing the beach, while one player plays the shark itself. It’s part cooperative, with one person as the obstacle standing in the way between them and victory. It’s a cool idea, though I guarantee everyone is going to be fighting over who gets to be the shark. The Jaws board game is set to come out in late June. More below!

The classic Hanna-Barbera cartoon has gotten a fun miniatures racing game with CMON’s Wacky Races, where players use various card combinations to create different race tracks that they work to move across the fastest. Quirky characters like the Slag Brothers and Dick Dastardly work to either complete the race or sabotage everyone else.

The game will be available for preorder by the end of March, and CMON said that people who preorder it on their site will get pre-painted miniatures, instead of having to do it themselves. Wacky Races is set to come out in April.

Also from CMON, the latest in the surge of Lovecraftian board games with Cthulhu: Death May Die. I asked a CMON representative what sets their adaptation of the Cthulhu mythos apart from other Lovecraftian board games, and they told me that their version isn’t about surviving Cthulhu, it’s about “kicking his arse.” The characters don’t have to simply fight to survive and keep sanity against an otherworldly monster, meaning there are more opportunities to fight back. Cthulhu: Death May Die is set to come out in June.

Calliope Games gave us a cool demonstration of ShipShape, an upcoming board game where players take on the role of smugglers (not pirates) who are trying to steal the best goods. It’s a combination strategy and betting game, where players wager on what order they get to snatch the goods—but you want to be careful what order you’re in, as the gaming tiles can slowly reveal even better items down the ship. ShipShape is set to come out by the end of June. 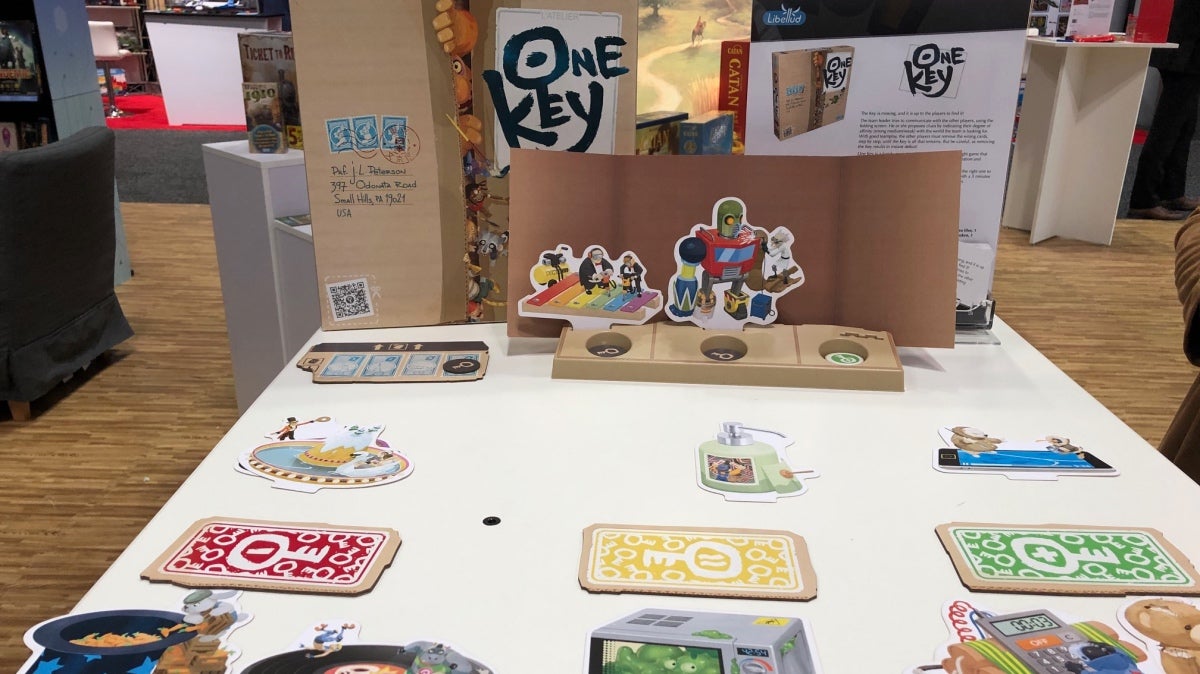 A sample playthrough of One Key. I think I won? (Photo: Beth Elderkin)

The creators of Mysterium (seriously, one of my favourite games) have announced a pretty exciting follow-up. Libellud’s One Key, being distributed by Asmodee, uses a similar mechanic to Mysterium in that players have to guess certain clues based on images one player has provided to them.

Only this time, the players aren’t only told what the item in question looks like, they’re also told what it definitely doesn’t look like. It’s up to the players to undergo a process of elimination and figure out what exactly the other player is thinking about. And, of course, the artwork is just as gorgeous as ever. One Key is set to come out by the end of June.

Asmodee also showcased an upcoming game called Quirky Circuits, a family-friendly board game from the makers of Stuffed Fables. Players work together to take on the role of a single cat on top of a Roomba, which is trying to go around the house collecting dust.

Except players can’t tell each other what direction they’re sending the vacuum, so it’s possible that what one players does will completely screw over everyone else. Like Stuffed Fables, the game comes with a book that has a series of boards on it, providing different challenges for players. We haven’t learned the release date, but we’ll keep you posted.