On The Sea Of Thieves, I Only Sail Alone

It’s a silly swashbuckling game made for going on treasure hunts and bounty hunts and chicken hunts with friends. Its primary allure is as a pirate-themed sandbox in which you can swordfight with other pirate players and walk away from an afternoon of adventure sporting new inside jokes with your friends.

Every part of its design is meant to be experienced in a group setting: ships that must be captained collaboratively, instruments that can be played in harmony with others, and a brig in which to lock rowdy shipmates.

Not only that, but sailing alone can make you prey for other players who are as likely to befriend you as sink your sloop after stealing the booty you’ve hoarded in your hull. Despite the carefully designed co-op, the risks have failed to sway me from the rewards I’ve found tackling the seas solo.

I started sailing alone in Sea of Thieves because my friends are a bunch of cackling lemurs that drop anchor on our galleon while the sails are still thirty-two weeks pregnant. Every time, the poor hull wails in protest, as do I, but my crewmates hear neither because they’ve already jumped ship and swum halfway to shore.

That was during Sea of Thieves’ first week. We all played together for entire days during the beta period, and by the time launch day pulled into port, I was ready for some damn quiet. Just me, the waves, wind, and my hurdy-gurdy.

I love my friends, but sailing solo soon became a guilty pleasure. I started choosing to appear offline when I pulled up the Xbox app on my desktop. When it’s just me, I’m truly the master of my own ship. I know exactly where to stand when raising anchor so that I’m facing the helm when it’s fully up. I know how much sail I can let out without obscuring my view from helm to prow.

I know where each of its lanterns are and exactly how close I can steer its hull to a sandbar without scraping against the edge and winding up with a hole to patch. 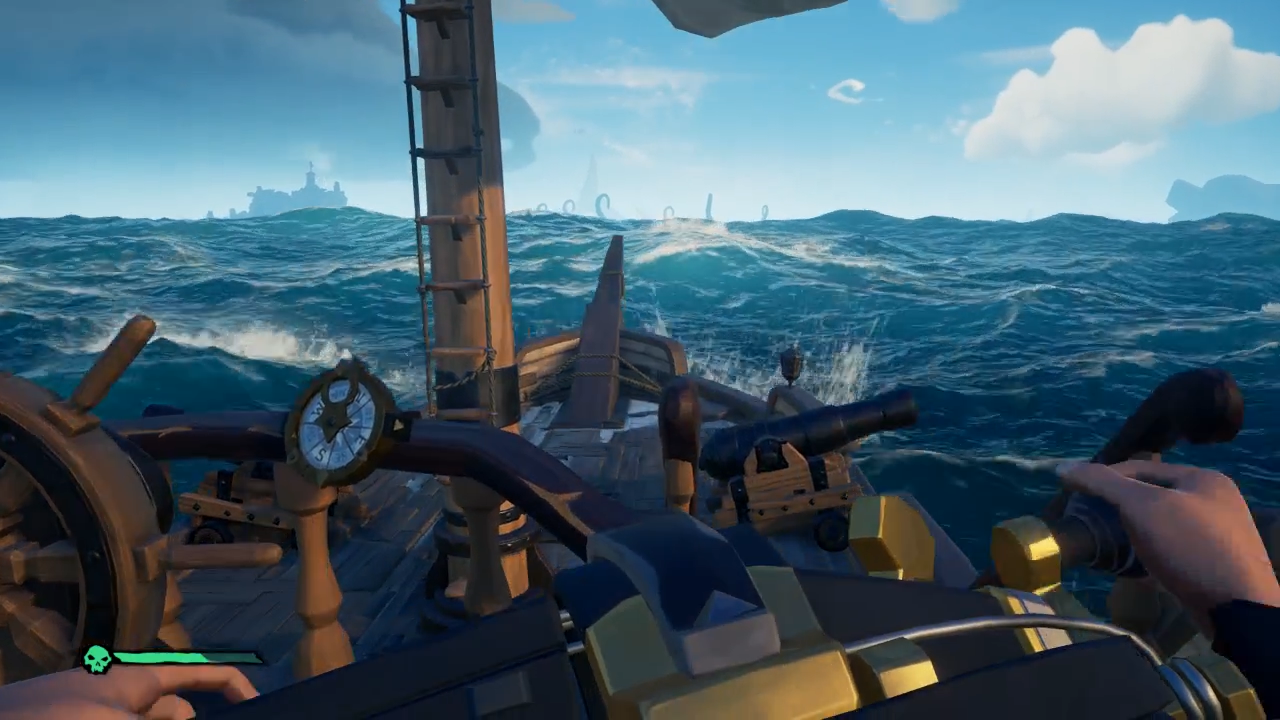 I was standing on the edge of my sloop’s prow, playing my favourite shanty on my hurdy-gurdy—I’d hum it for you if I could, because I know it well enough that I’ve tried to write lyrics for it as I sail. All of a sudden, six curled tentacles faded into view far enough away that I pulled out my looking glass.

I’d only started playing again after a nine-month absence, having been reminded of Sea of Thieves’ first anniversary by Heather Alexandra’s roundup of the changes since launch. So while I had heard of the Kraken, I had not yet espied one firsthand.

It had been a quiet few solo voyages for me, and my ship was empty of valuable cargo, so I spun my wheel portside to take it head on. I did not expect to live. I just wanted to see what would happen. I pulled my hurdy-gurdy back out and quickly shuffled songs until I found Ride of the Valkyries, a fittingly dramatic tune for my impending doom.

Just as I was nearly within rifle range, between the swell of one wave and the next, all six tentacles ducked beneath the surface. I rushed from port to starboard to aft of my sloop, waiting for the Kraken to burst from the waves and crush my hull to toothpicks.

It never does. It just leaves. I’m alone, playing a dramatic song in anticipation of a gnarly demise that isn’t coming.

That pretty much describes all of my experiences with Sea of Thieves: mysteriously unmolested despite my sudden desire for a brush with danger. The one time I saw a skeleton ship, a grim and green vessel full of undead enemies, it emerged from the waves with the audacity and ill-fortune of the Titanic.

It sailed immediately into a rock twice its size, careened into my sloop, and spun in confused circles while I tilted my sails to the wind for a clean getaway. I continued on to my nearby destination, Rum Runner Isle, with no sign of the ship in pursuit. Thirty minutes after that, a megalodon waved a fin at me as I pulled up to Rapier Cay and, apparently not wanting to interrupt my business, swam off.

I never seem to encounter any of the dangers that a captain is supposed to contend with at sea. I’m untouchable. It’s turned Sea of Thieves into an almost meditative experience. I rarely play for extended periods of time, usually only a couple hours, and not often at peak times. The sea is quiet when I visit. Apart from my one attempt to pick a doomed fight, I don’t mind. 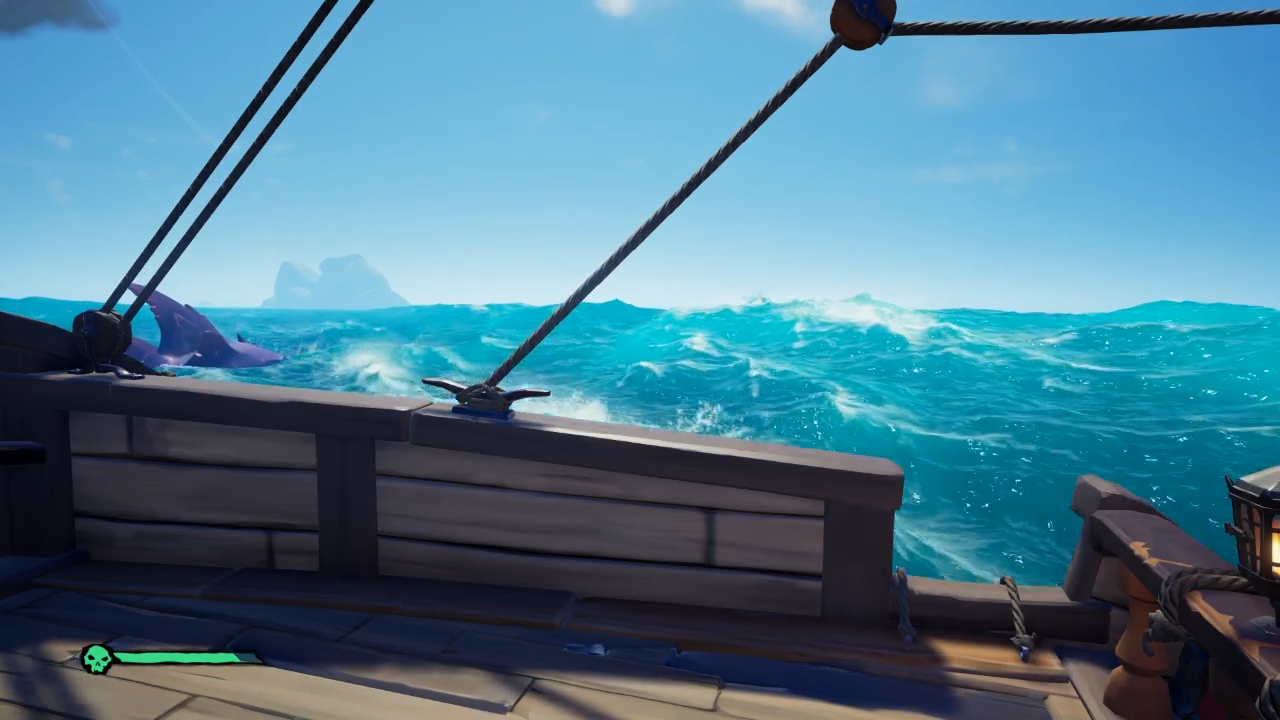 Unlike the relationship I had with games years ago, I now value a certain amount of routine predictability. I don’t want to be that person that compares every game to Dark Souls, but solo slooping has a methodical quality that reminds me of travelling Lordran.

In the same way that I grew comfortable with the angle at which I can successfully score a backstab on a Jailer in Irithyll Dungeon, I know the distance from an approaching island at which I should pull my sails up to half-length, and the turn radius I can get out of my sloop when diving into the bay at Cannon Cove.

As Mike Fahey wrote during the first weeks that Sea of Thieves was live, the high seas aren’t meant to be tackled alone. They are a sandbox entirely built around the assumption that you have friends to play with.

Everything in the game, from voting on voyages to the ability to turn around your treasure map and show it to someone, is designed with the intention of captaining a ship with a crew.

There are only a few types of voyages to tackle in Sea of Thieves, even a year in. On my own, I’m less concerned with the novelty and more interested in the simplicity of charting an efficient route to a familiar island and returning to an outpost with my honestly earned loot.

In so doing, I am wilfully missing out on the core Sea of Thieves experience. Yes, I did have a good first few days cackling while puking grog all over my crewmates’ sandaled feet a year ago. Maybe I’ll sail with my friends again eventually, but for now I enjoy the silence out at sea, only interrupted by my new sea monster friends.