During a match of Star Wars Battlefront II, a player found an enemy player trapped in a small hallway behind some doors. They could have left the other player, the trapped player was in the enemy spawn after all and would die if they moved closer. But instead, something else happened and created a fun and sweet moment that became popular in the community this past week.

Reddit user Logan_Kap posted a clip of them playing as a droid in Star Wars Battlefront 2 earlier this week. The video showed him stumbling upon a strange sight.

At the end of a long hallway, Logan_Kap spotted Anakin Skywalker standing next to a closed door. This is odd because Logan had just spawned and Anakin is part of the enemy team. What was this enemy Jedi doing in here?

It turns out Anakin was trapped. These doors only open for one team and Anakin wasn’t part of that team. So by running into the doors while they were open and not leaving quickly, they had trapped themselves.

Logan cautiously approached the trapped Jedi and noticed that Anakin was signalling to him using their blocking animation. At this point, Logan_Kap could have left the Jedi. In fact, many in this situation might have. Logan_Kap explained to me via Reddit messages that he had actually been chased by that Anakin player and that was how they got trapped.

Yet, Logan_Kap did something interesting. Instead of shooting at the Jedi or ignoring them, he slowly walked closer. He was cautious, but he decided to trust his enemy and help the Jedi escape their hallway prison. Once Logan_Kap got close enough to the door, it opened and set Anakin free. At this point, Anakin could have turned around and killed Logan_Kap, but he didn’t.

Instead, he showed mercy and appreciation and let Logan_Kap live. Well for about 2 seconds, until another enemy player on the other side of the door blasted Logan_Kap and killed him. 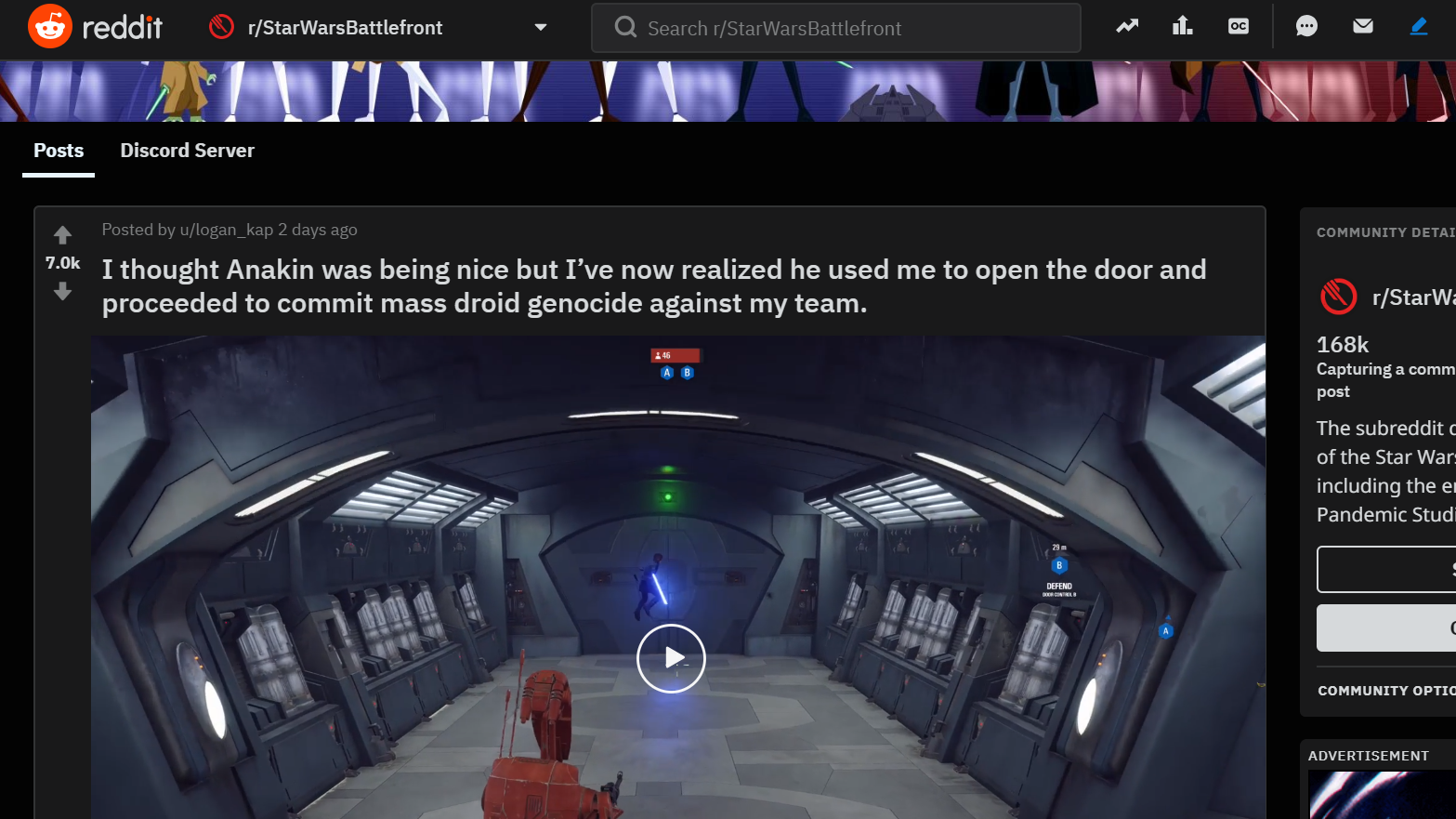 Logan_Kap’s post quickly became popular on the Battlefront subreddit and as of this writing, it has 7.0k upvotes. But the story wasn’t done quite yet.

The next day another Reddit user, TeamRedDragon, posted a clip from Anakin’s point of view and shared their thanks to that player for letting them escape.

In Star Wars Battlefront II becoming a hero like Anakin isn’t simply spawning as the character. Players have to earn enough points during a match to unlock the Jedi and once they die, they can’t spawn as that hero again until earning more points. For many players, getting to play as a hero might only happen once or twice during a match. So losing your chance to be a Jedi because you got stuck in a hallway would be disappointing.

TeamRedDragon admitted he did chase Logan_Kap into the hallway and got himself trapped. When he realised this he began to signal to Logan_Kap.

“Every player wants to play a hero and it sucks when [you] accidentally get trapped. And I hoped he’d help me out,” explained TeamRedDragon.

Luckily for TeamRedDragon, Logan_Kap is a merciful player and as the clips show, he saved TeamRedDragon. To show how thankful he was for being saved, TeamRedDragon says he spared Logan_Kap though another player on his team killed the droid anyway. It’s the thought that counts.

In the future, Logan_Kap says he will help any other Jedi and Sith that get trapped in this hallway.

“I know if I got trapped in there I’d be pretty frustrated. Plus when we save our fellow players it can create funny and wholesome moments like this.”