Thanos Gets A Suitably Smug Avengers: Endgame Figure, And More Of The Most Triumphant Toys Of The Week

Welcome back to Toy Aisle, the round up of all the future drains on our wallets we’ve seen on the internet lately. This week, Avengers: Endgame comes to Hot Toys, Wolverine gets a truly ridiculous samurai re-imagining, and you can be on Detective Pikachu’s case with a truly adorable hat. Check it out! 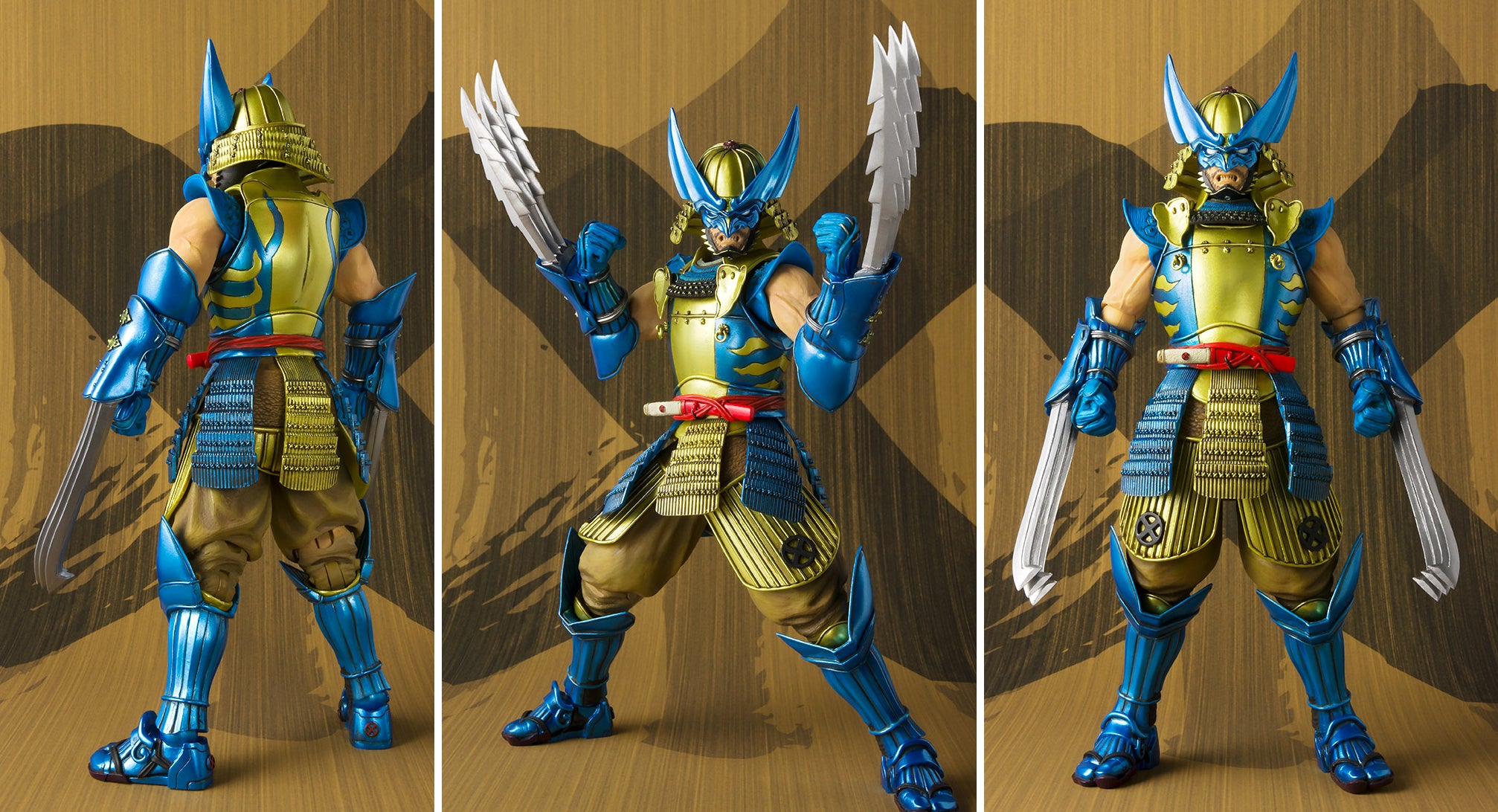 It was first shown off at Toy Fair in New York in February, but we now have official pics for the latest addition to Tamashii Nations’ Manga Realisation line with Outlaw Wolverine now decked out in full feudal armour.

The shiny blue and gold finish looks fantastic, as does this 18cm Logan’s masked exaggerated rage face. We’re not entirely sure where either version of those oversized claws retract to when not in use, but who would ever want to put them away? Pre-orders start next week, while the figure is expected to ship sometime in August later this year. 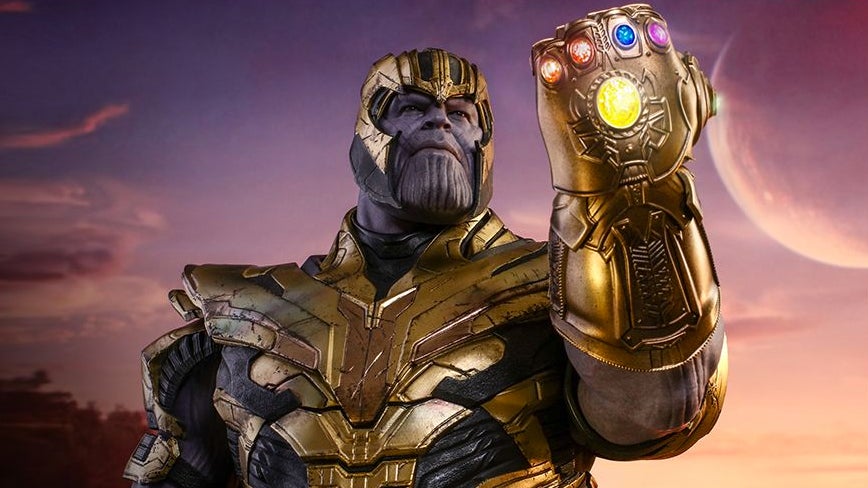 You know what they say: A nice action figure is its own reward. But for Thanos, his latest Hot Toys imagining is second prize to having snapped away half the universe at the end of Infinity War. Based on his armoured look as it’s been updated for Endgame, Hot Toys’ latest sixth-scale figure includes a light-up Infinity Gauntlet, a removable helmet (so that you can pop on one of the two included heads, one stoic and one grimacing in anger), and perhaps most notably new of all, a double-bladed sword that’s been briefly seen in the recent trailers.

The Mad Titan ascendant will snap away an eye-watering $US415 ($584) from your wallet when he releases early next year. [Hot Toys] 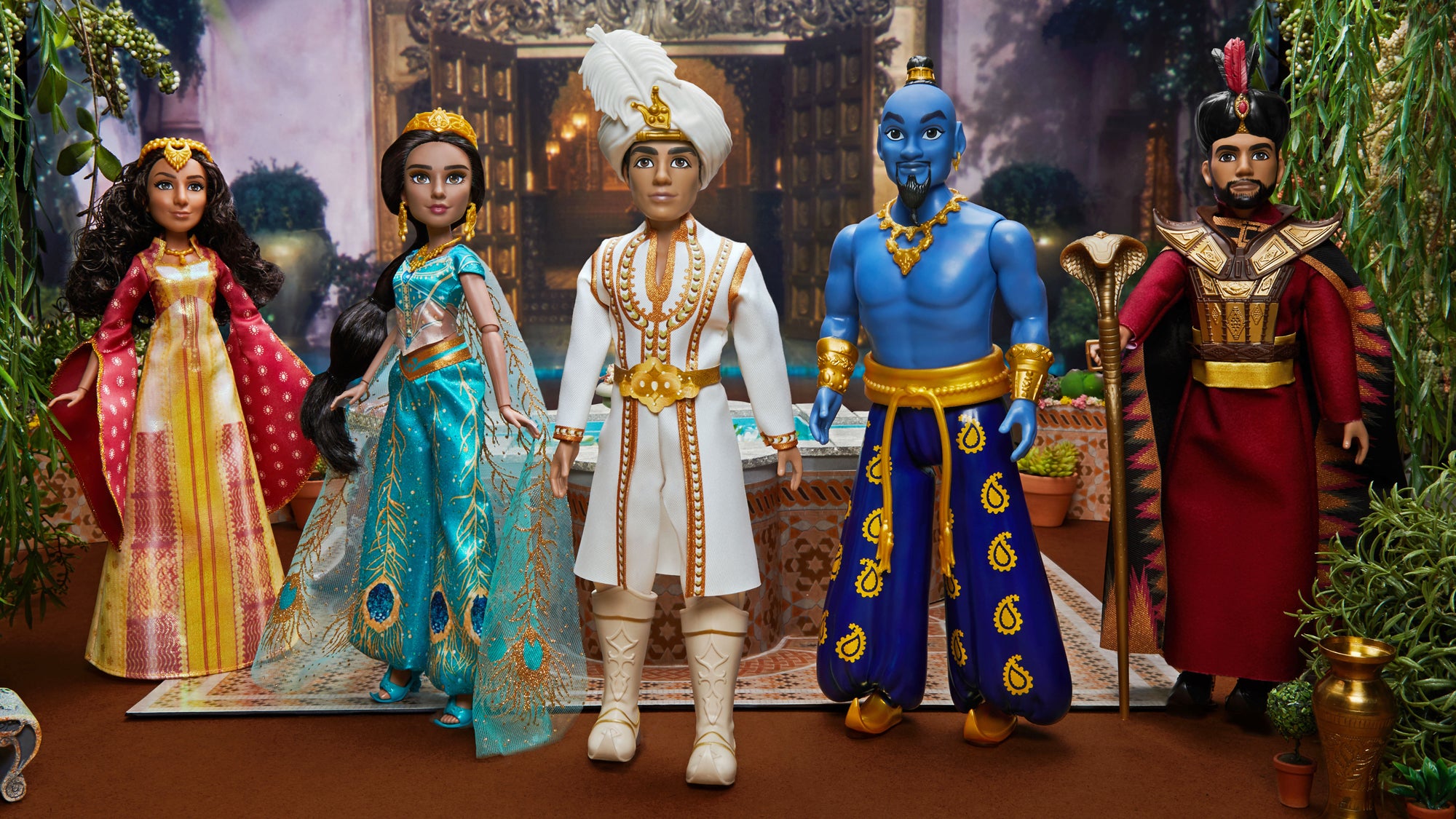 There can’t be anything more intimidating than having to follow an animated character performed by the late Robin Williams, and it remains to be seen if Will Smith can deliver for Disney’s upcoming live-action Aladdin remake.

What is for certain is that there will be toys—lots and lots of toys — starting with this $100+ Agrabah figure collection from Hasbro that’s available for pre-order right now, and shipping later this month. The set includes Princess Jasmine, her handmaiden Dalia, Prince Ali, the blue version of the Genie, and Jafar, all in remarkably lavish outfits. “Fabulous Harry, I love the feathers!” 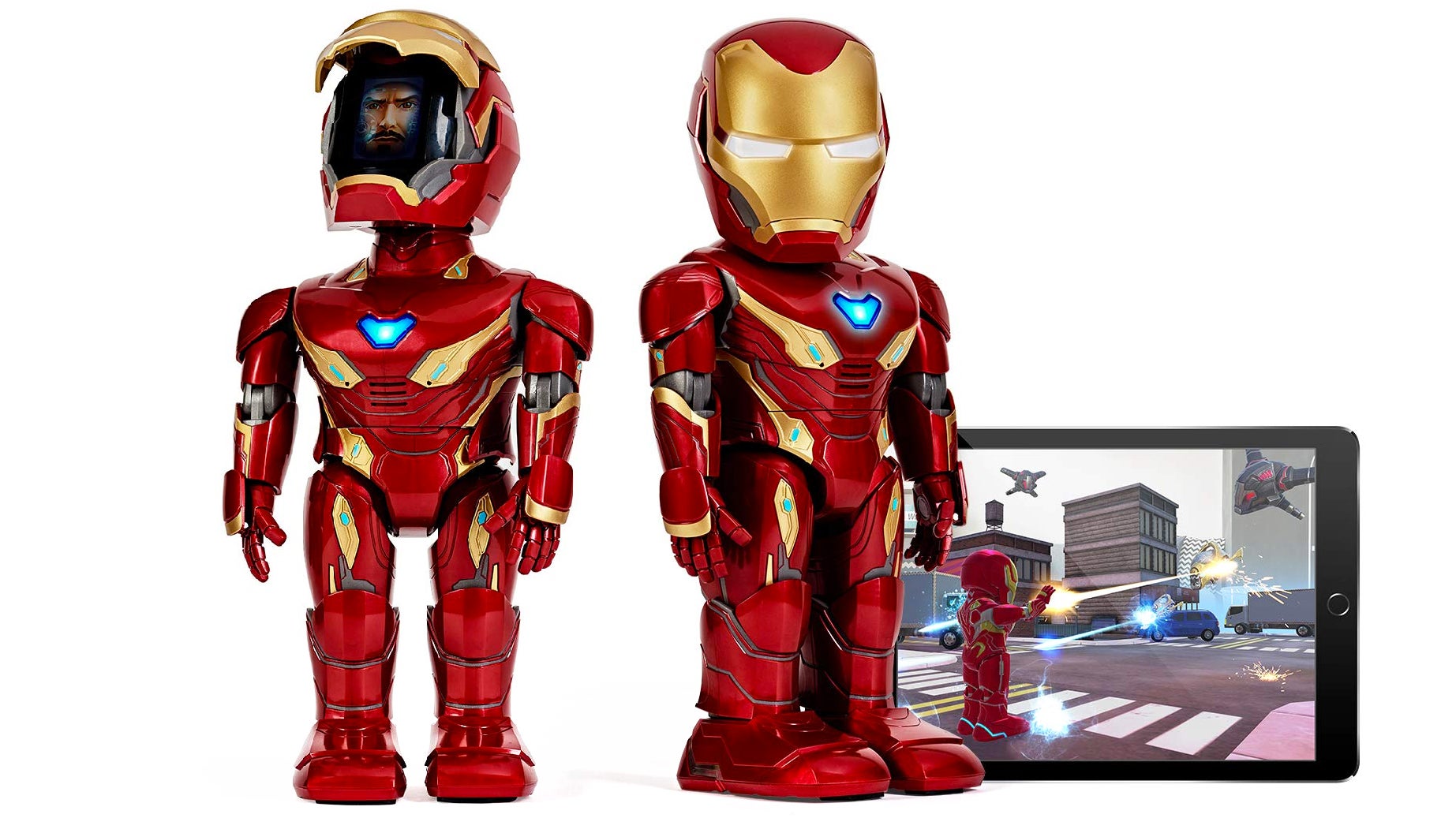 If the many, many action-figure versions of Iron Man are too static for your tastes, Ubtech will happily sell you a 33cm walking, talking, animated version of Stark that can do everything from autonomously guarding a room to draining $400+ from your bank account.

It’s somehow still cheaper than most of Hot Toys’ Iron Man creations, and it works with a free accompanying app for playing augmented reality games.

The visor even pops-up to reveal Tony Stark’s face, but since the effect is created with a small LCD screen, you can swap in your own face and live out at least part of your Avengers fantasies. 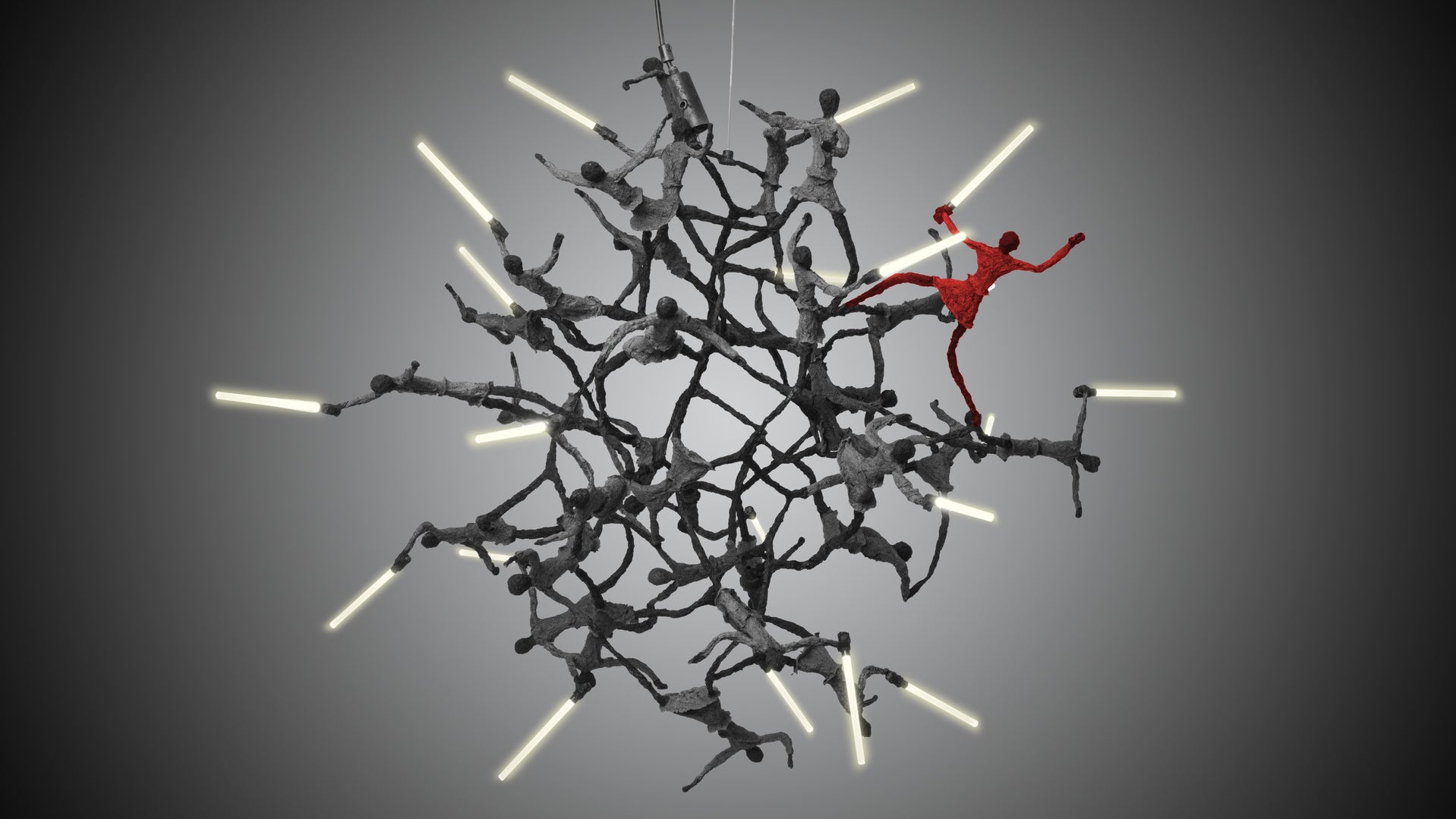 Looking for a new hanging lamp to repeatedly bang your head on throughout the day? Designer Kenneth Cobonpue has an entire line of Star Wars-themed home furnishings, including TIE fighter arm chairs and Wookiee foot rests.

But the most striking piece is this chaotic hanging lamp featuring a cluster of Jedis with glowing lightsabers in hand ready to fend off a single Sith attacker. It’s a form-over-function piece, as it doesn’t look like the lamp will cast too much light on a space—but nothing is impossible with the Force. 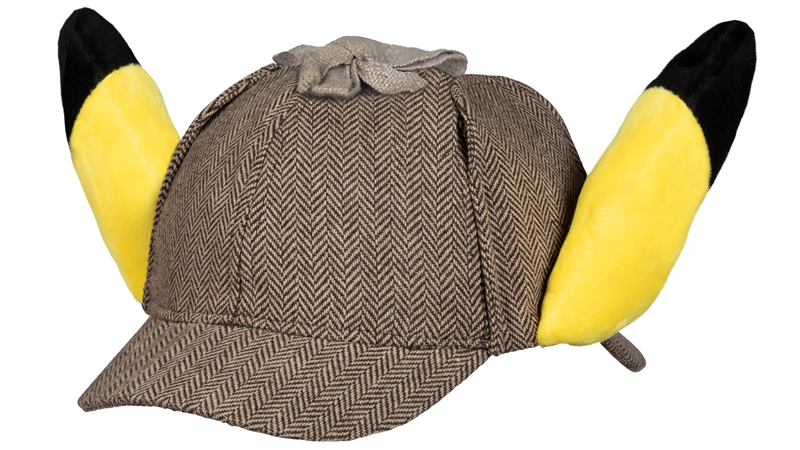 What makes your common electric mouse Pokémon an extraordinary detective? A fetching deerstalker, of course! But while you may not be an electric mouse Pokémon yourself, you can now at least pretend you are one with this glorious combination hat/Pikachu ears get-up, coming as part of the official Pokémon Center’s line of apparel and merchandise for the Detective Pikachu movie.

Sure, you can get a t-shirt with a neon sign replica of Noctowl on it. But why would you want that when $35 can turn you into the greatest solver of Pokécrime on the planet?

The Deerstalker is set to hit the Pokémon Center webstore in the near future, but for now, you can browse what’s already available here. Also, we can attest: You can and will look delightfully ridiculous wearing this. 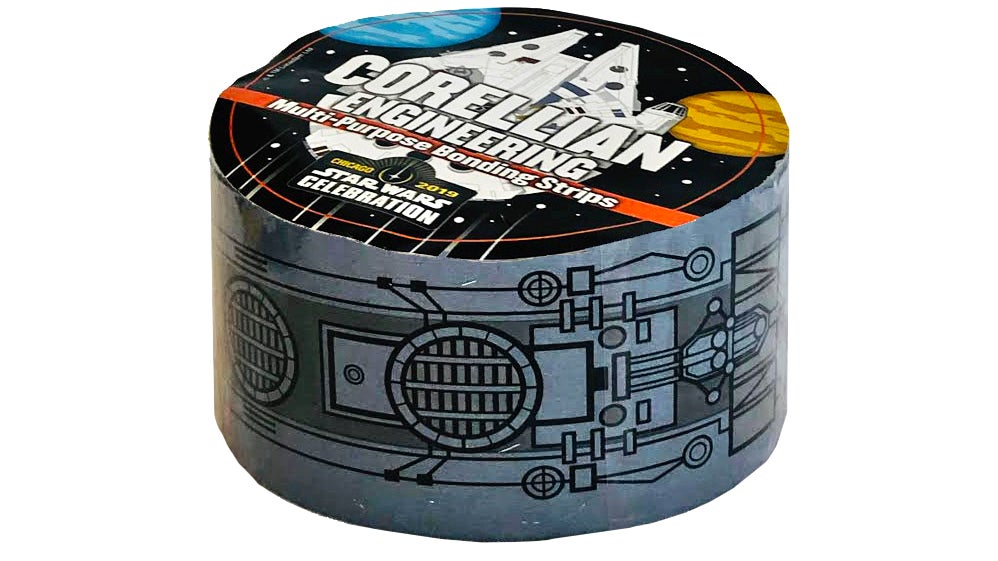 What do you do when a part on your Corellian freighter breaks and you don’t have access to a Wookiee to fix it? You turn to this roll of “Corellian Engineering Multi-Purpose Bonding Strips” and hope your temporary repairs survive your next jump to hyperspace.

Available exclusively at Star Wars Celebration in Chicago next week (and hopefully at other space stations and outposts afterwards), this $20 roll of duct tape features technical illustrations so it looks suitable for a space ship, even if you’re only using it to hang toy lightsabers on your wall.>