The Weirdest Little Transformers Ever

Throughout the years, the Transformers series has made a lot of things transform into robots. Cars, aeroplanes, tape decks, animals, and more have sprouted heads and limbs accompanied by the signature transforming sound. So why not everyday household items, sporting goods, and food? Hasbro’s BotBots Transformers turn everything into ridiculous little robots. Who’s up for a happy meal?

Launched in September of 2018, BotBots tap into the same zeitgeist that made toys like Shopkins—small plastic replicas of retail items with faces—fly off store shelves. They are essentially Shopkins that turn into robots. Tiny collectible toys are all the rage these days.

While there will always be fans willing to shell out $70 for the latest 25cm version of Optimus Prime or Megatron, there are far more people willing to spend $4 each on small, blind-bagged collectibles.

BotBots are stupidly charming. Here’s a pair of robots that turn into a roll of toilet paper and a plunger. Imagine the sort of life these two sentient machines must lead. Picture the horrors they have seen. Now look at their faces. They are happy. They accept their lot in life. 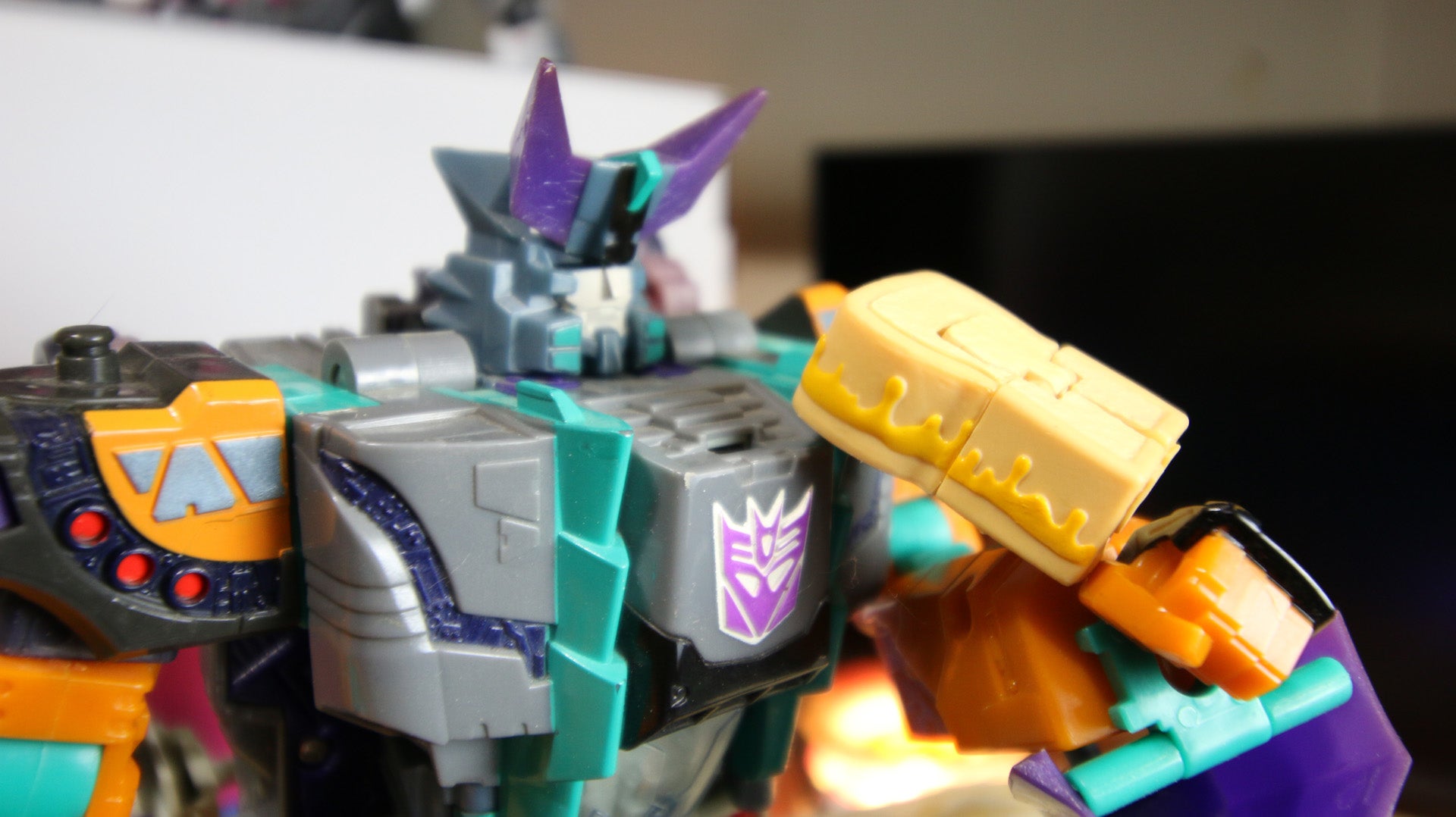 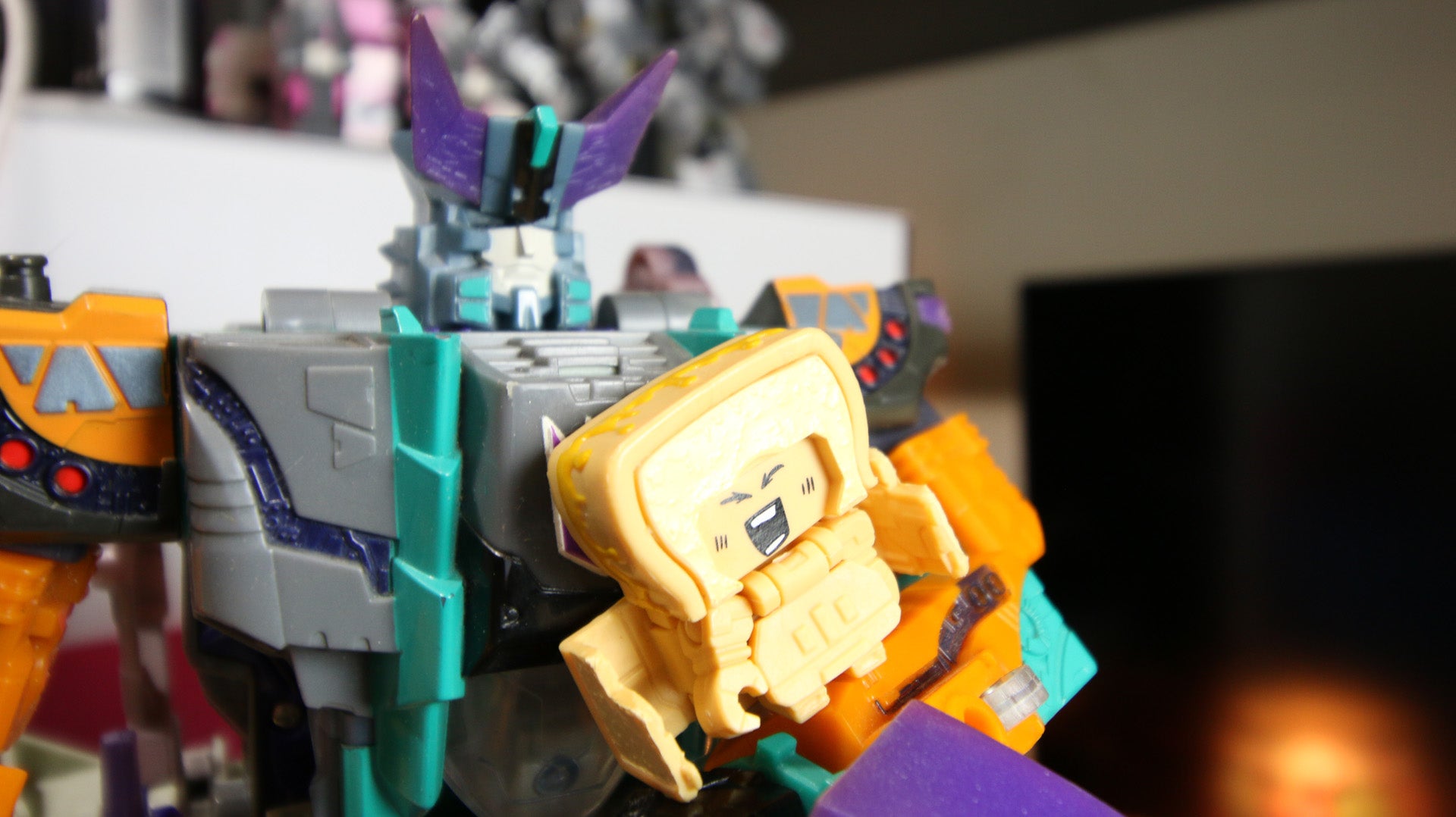 Grilled cheese? More like scream cheese, am I right? I am right. 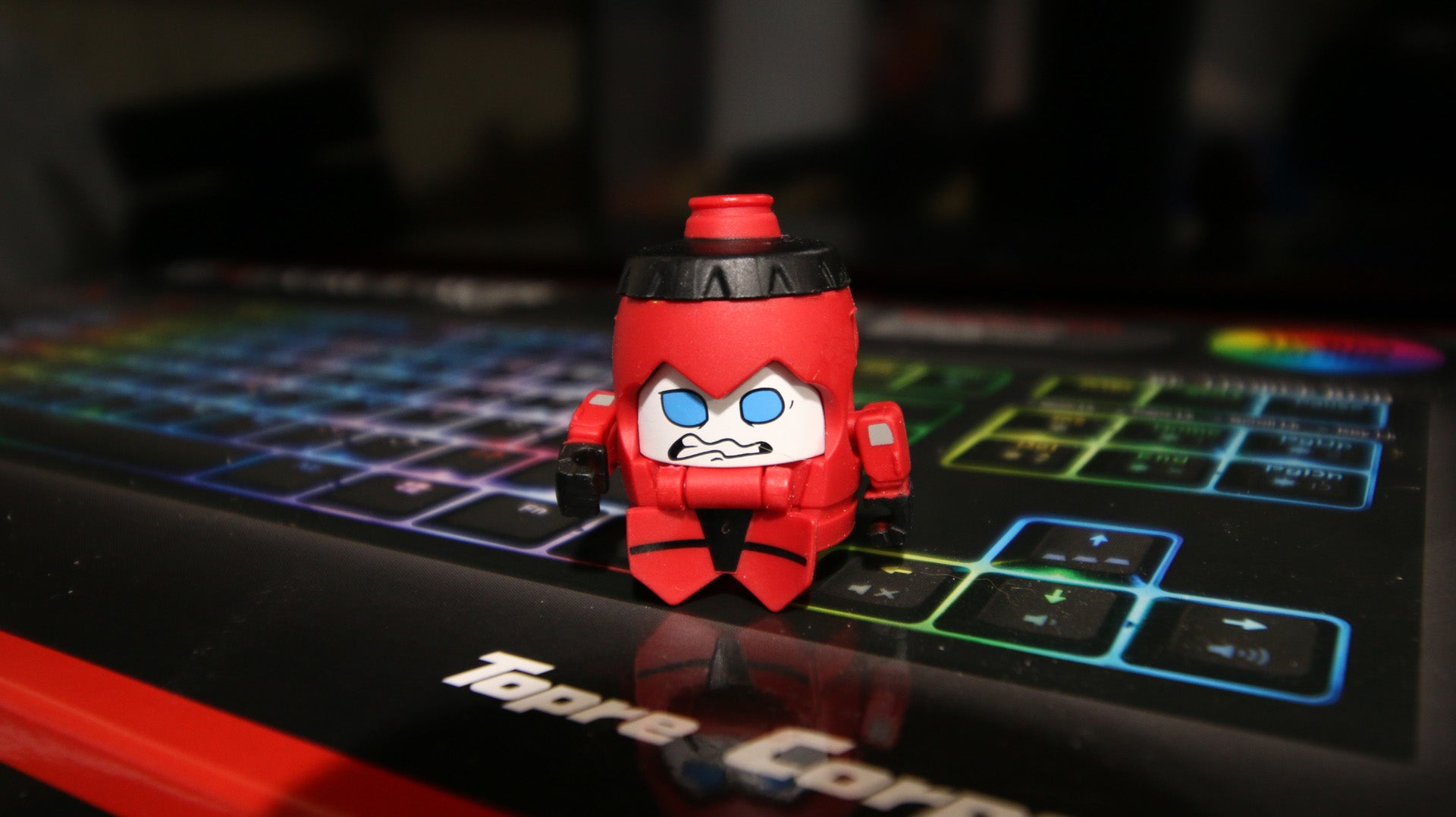 We start with one. 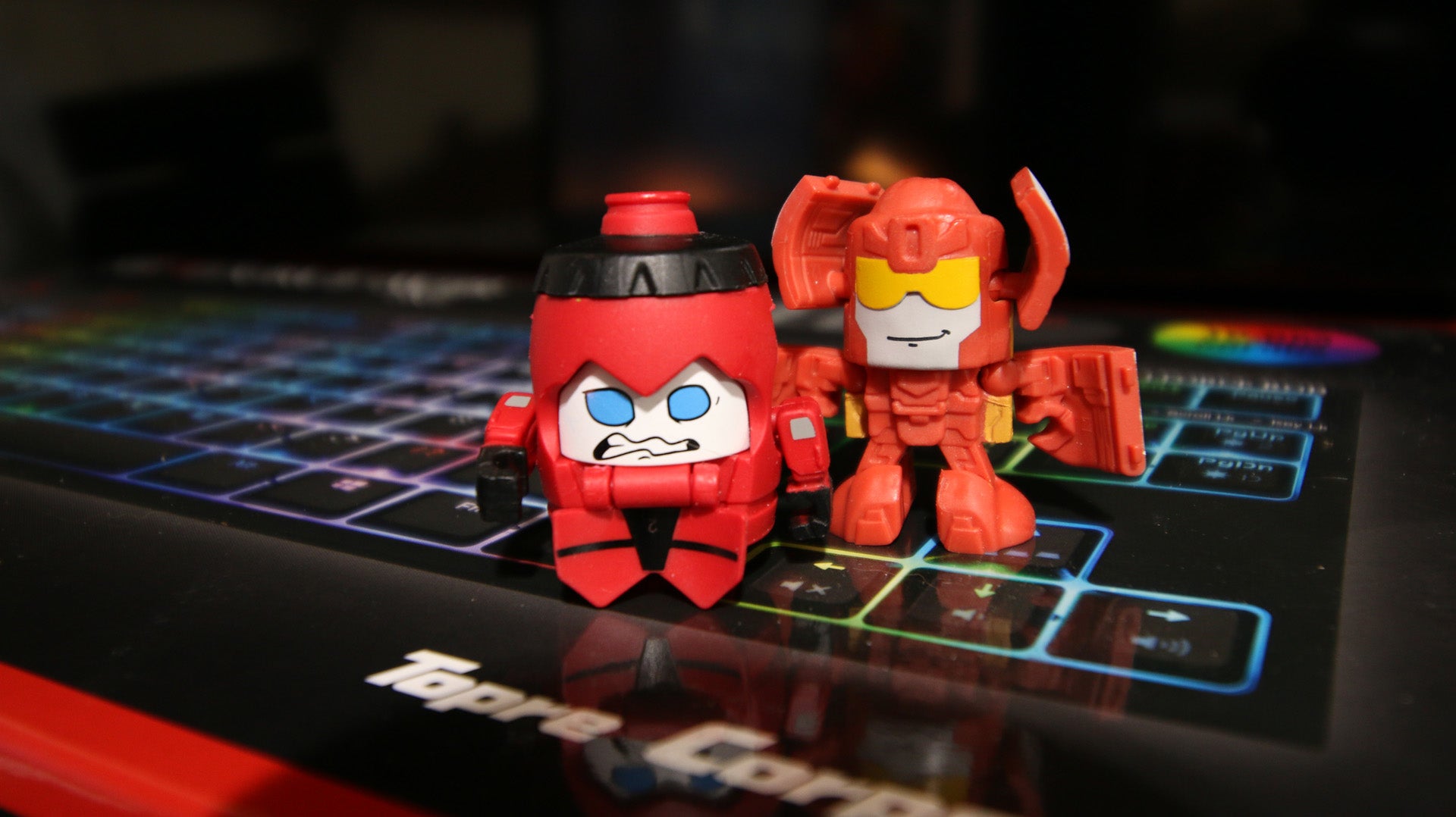 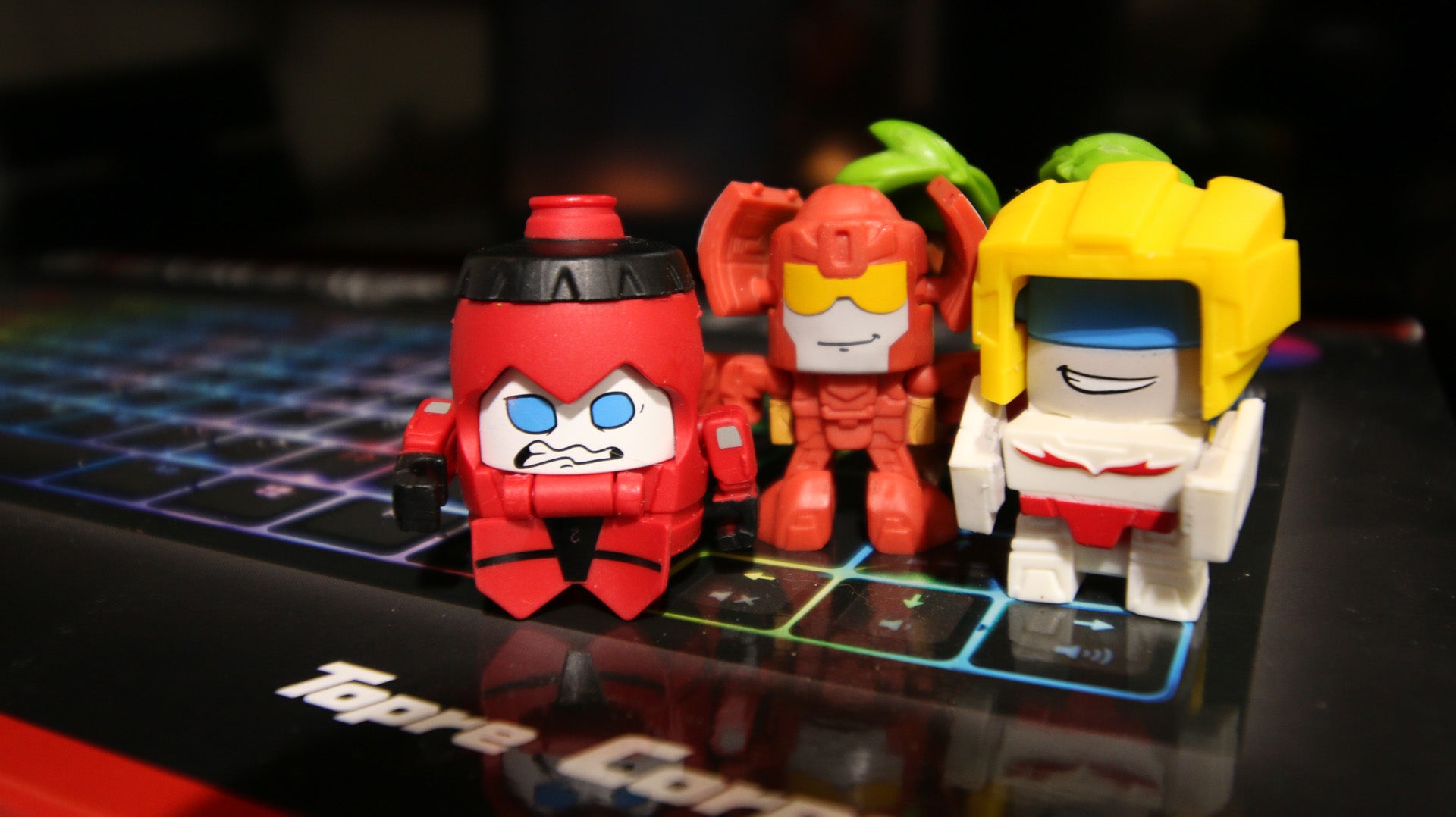 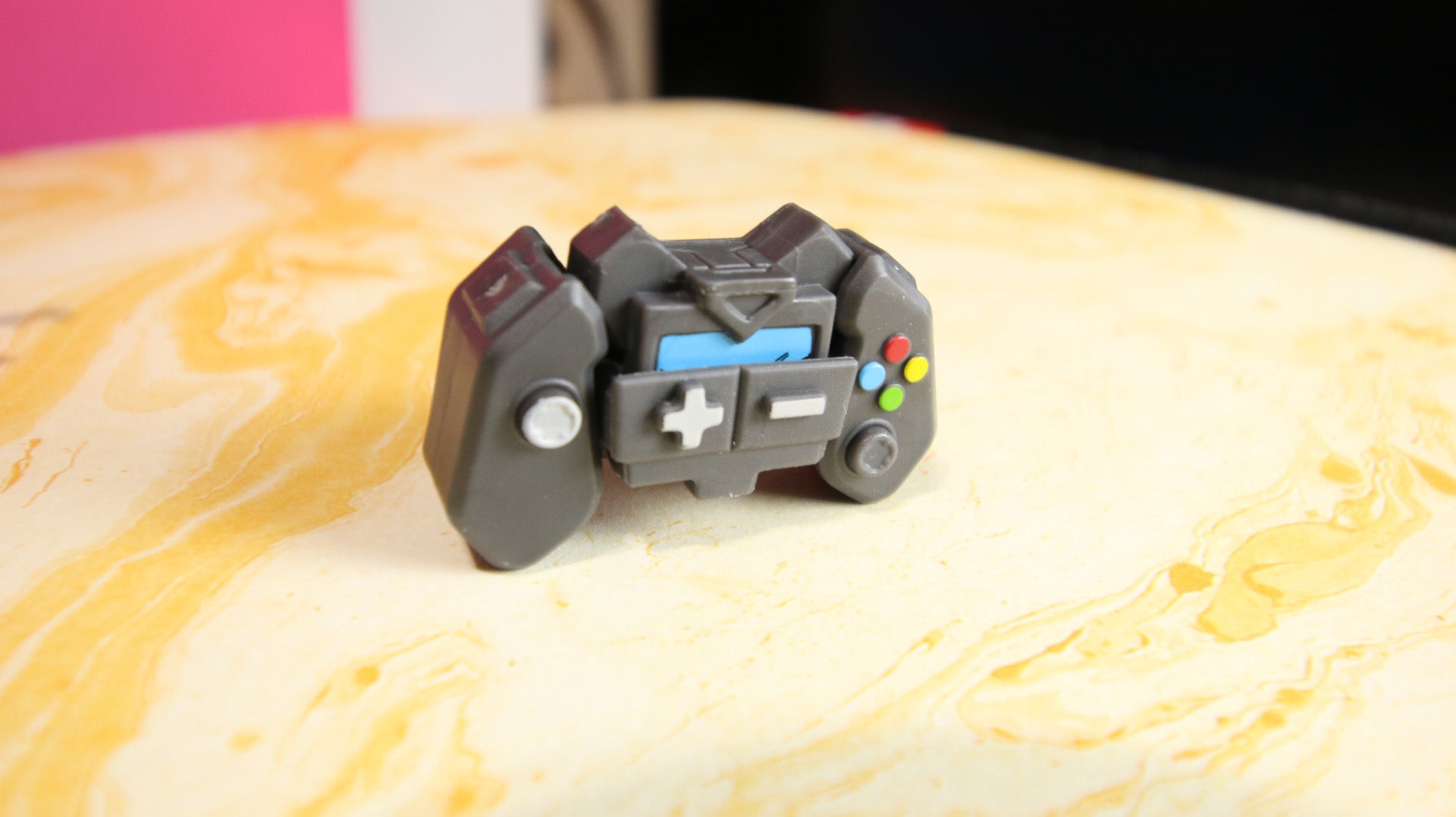 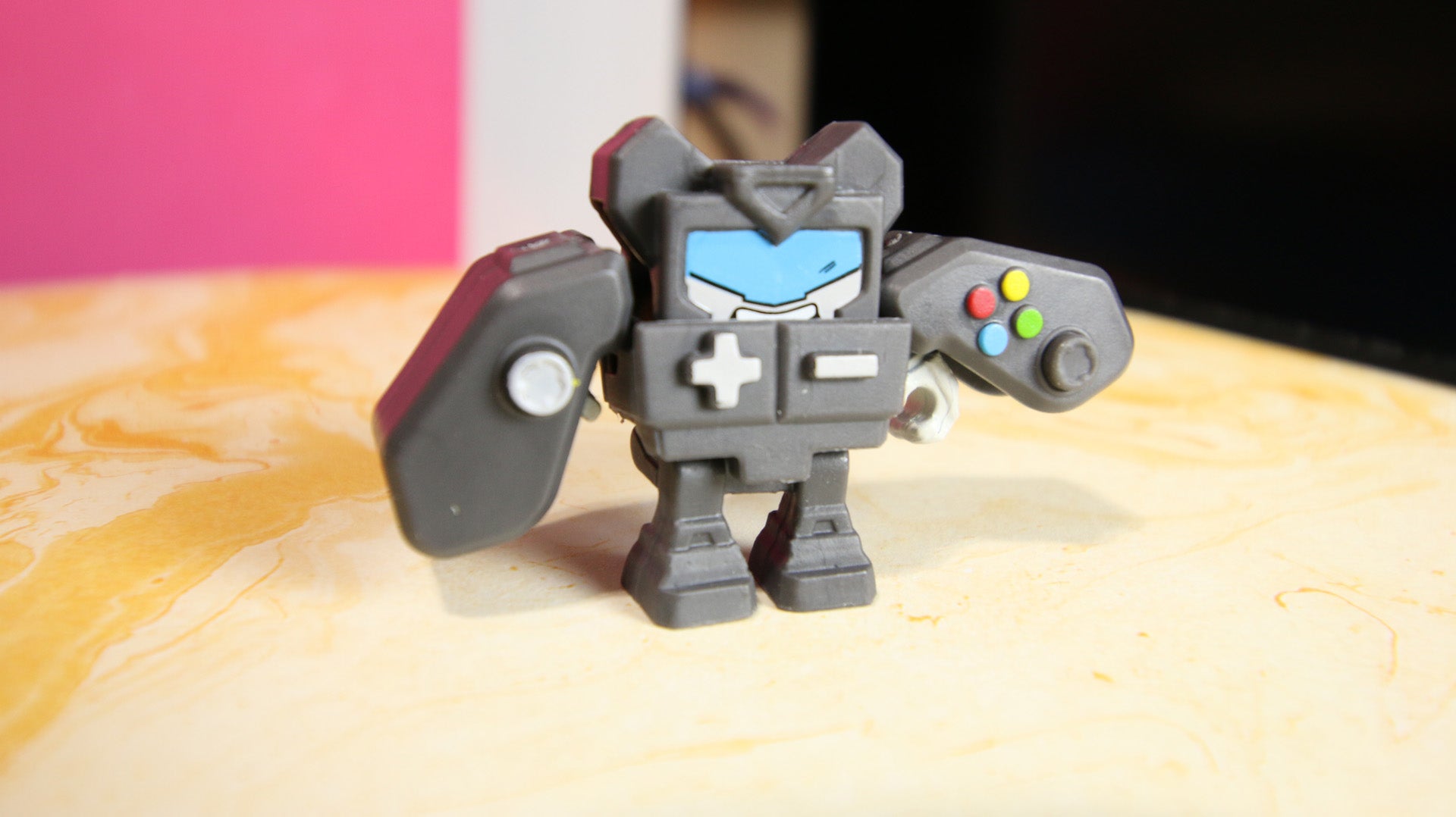 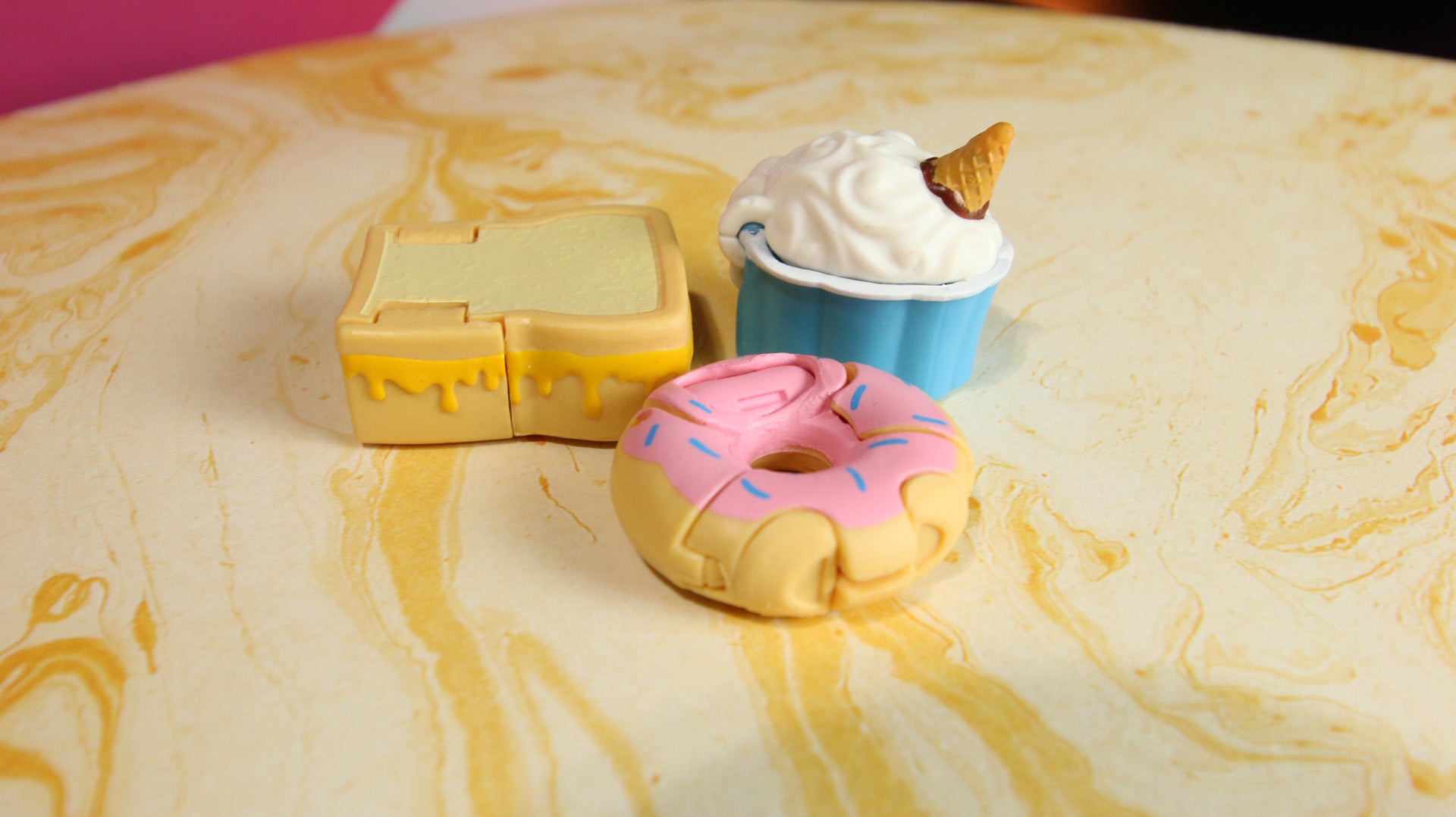 Food BotBots are my favourite. Especially the cupcake. 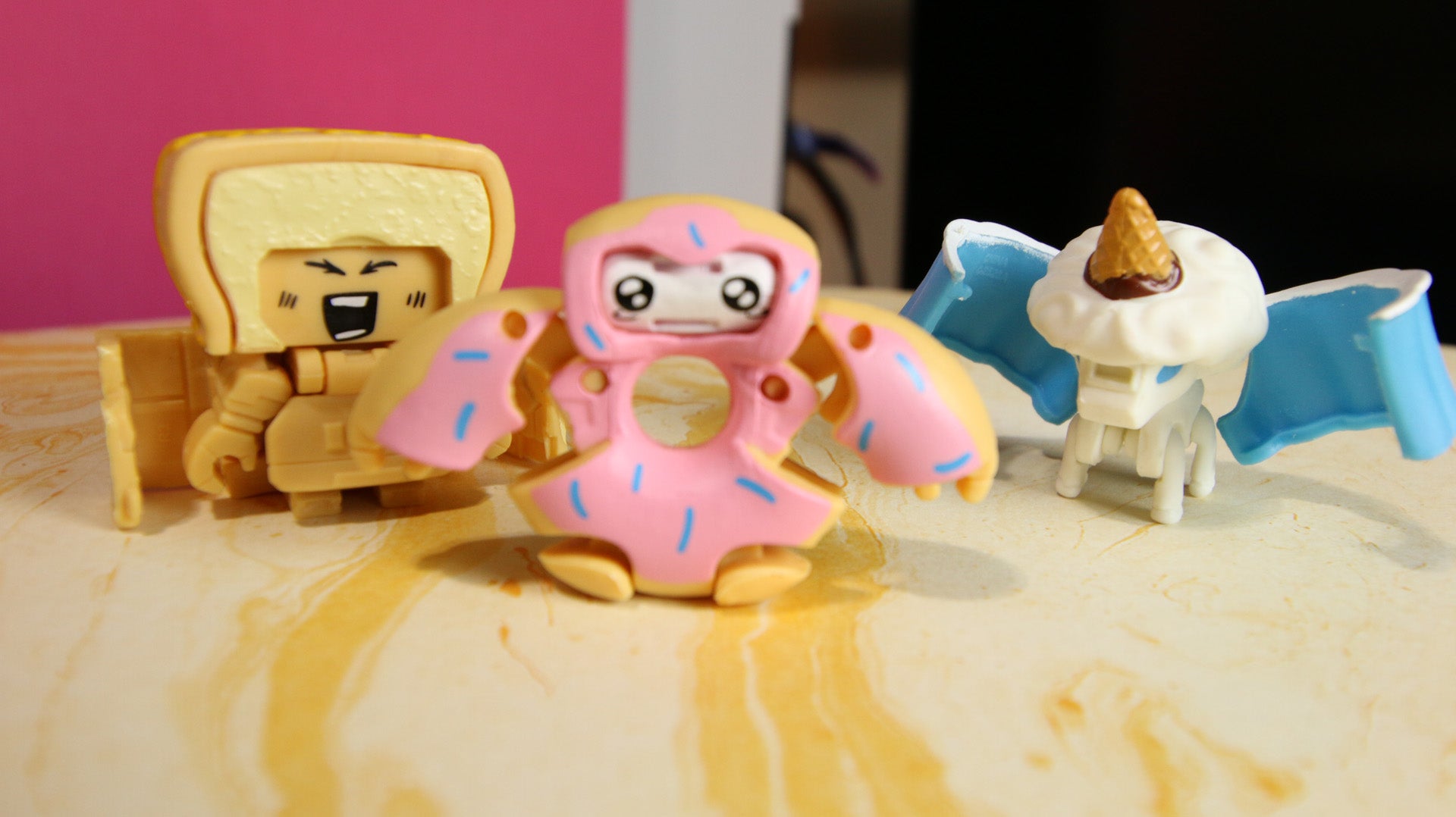 I love their stupid little faces. 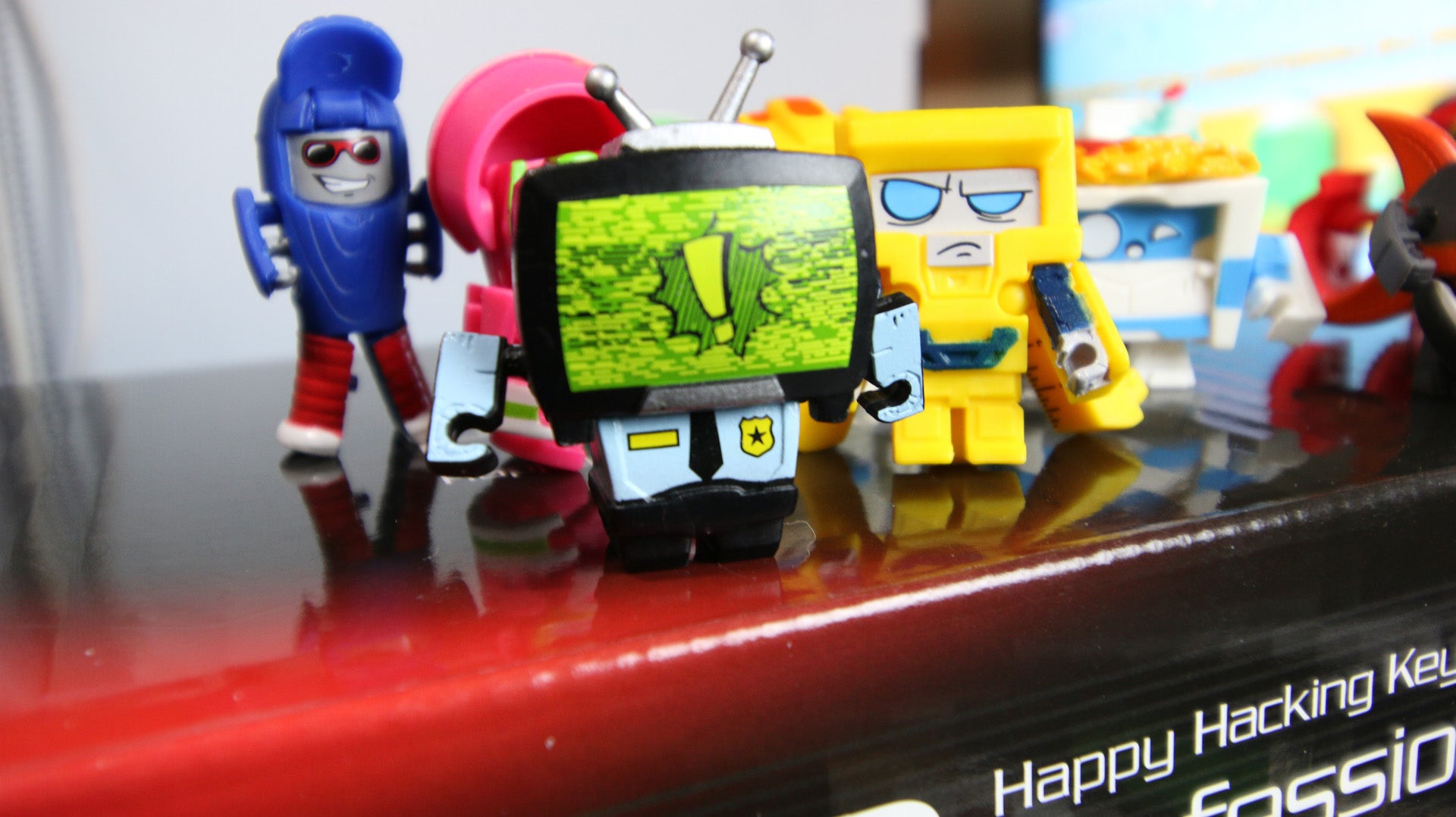 I only just noticed the television is a security guard. 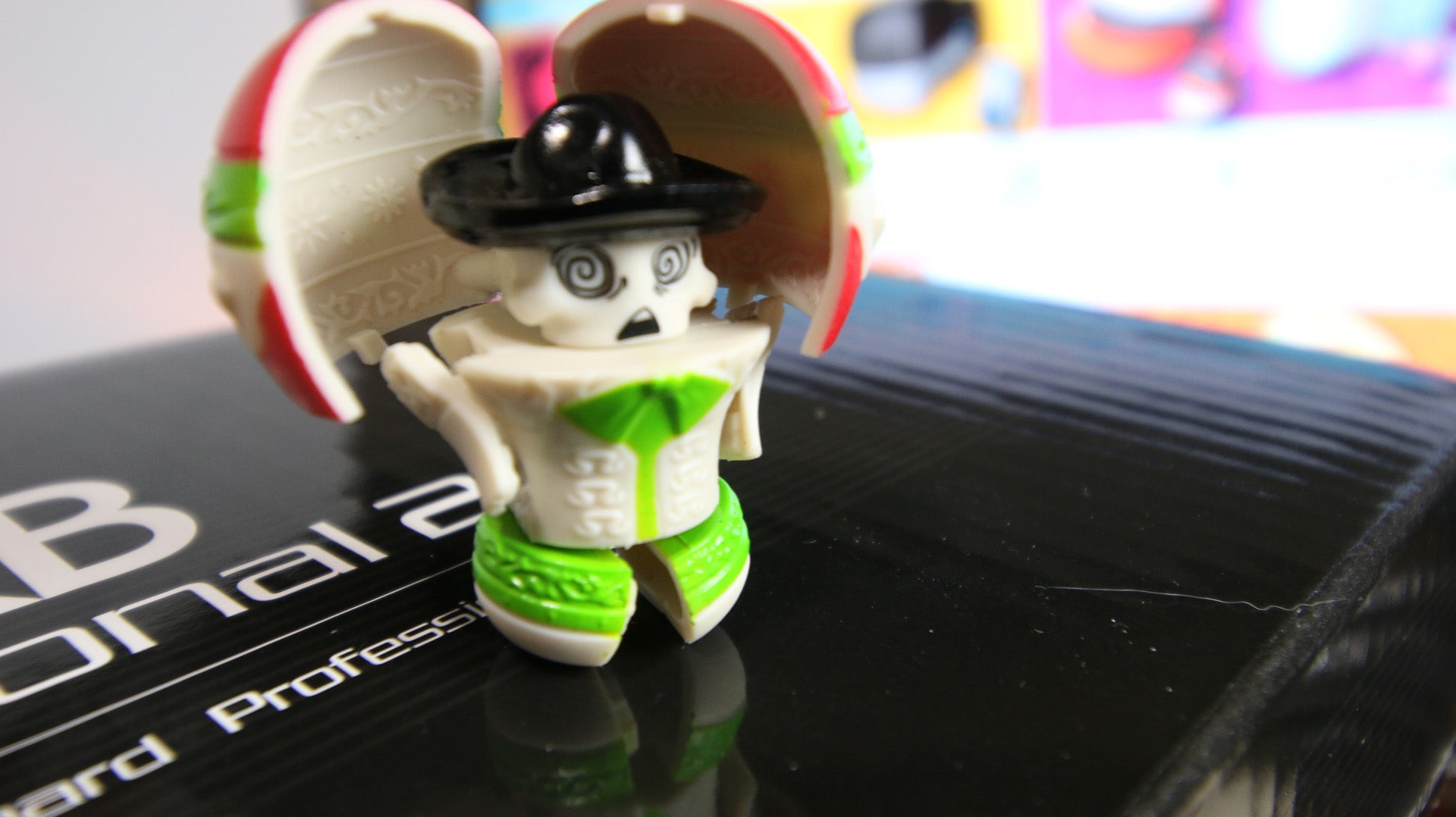 The face on the maraca bot here is priceless. His name is Dizzy Bones. 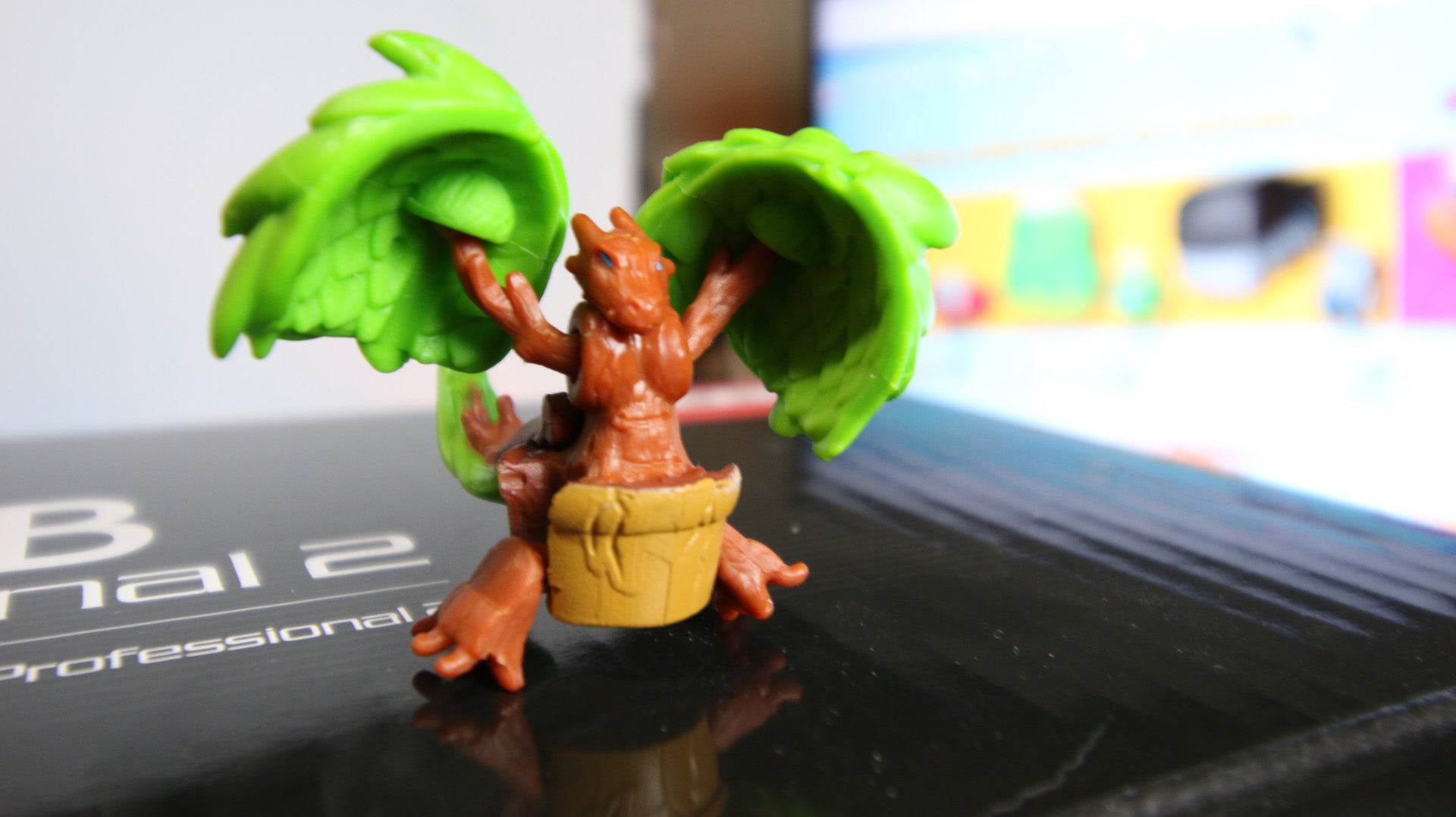 Rootwing here is my favourite series one BotBot. I feel like I’ve faced him in World of Warcraft. 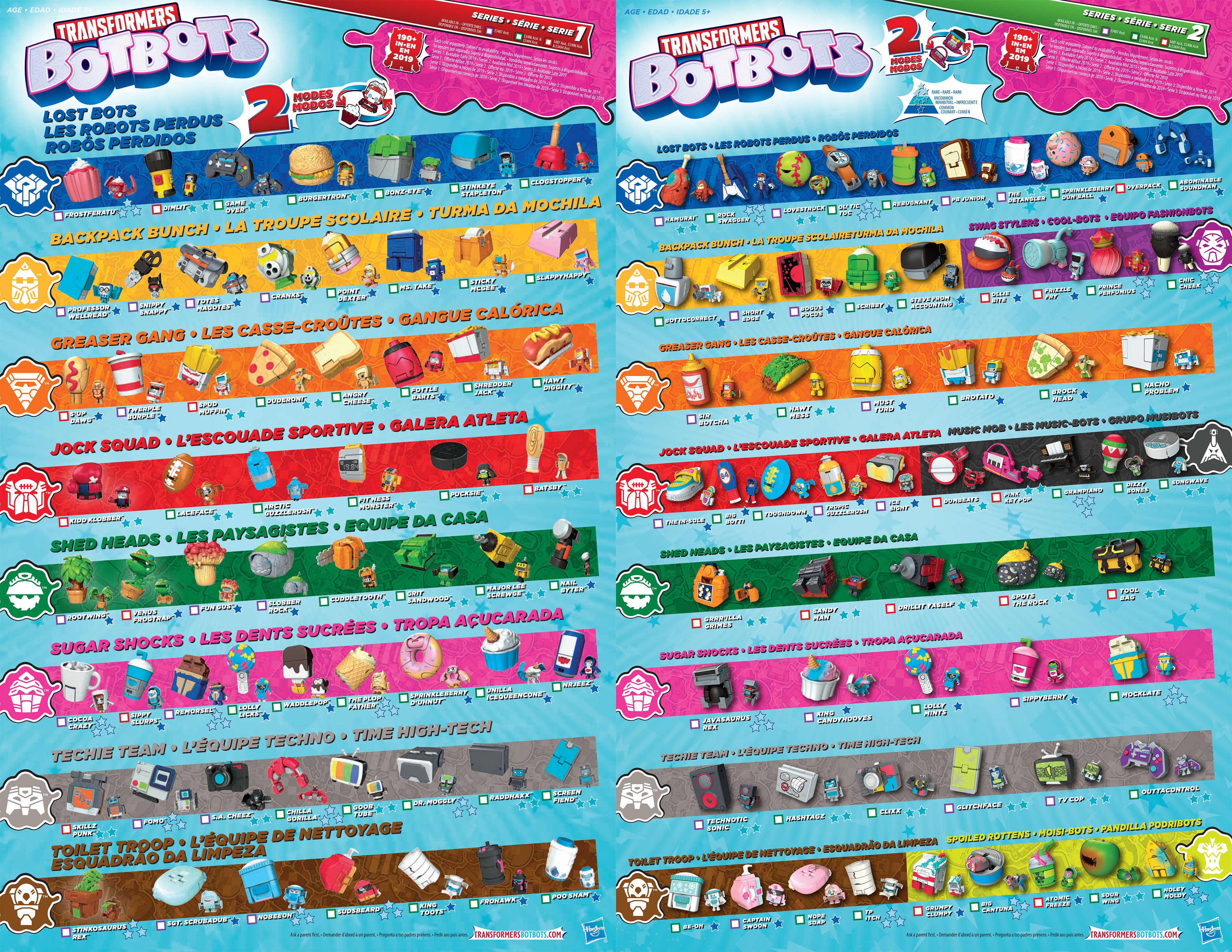 Here are the checklists for series one and two. I have all of them but four.

Personality is what sets BotBots apart from their larger Transformers cousins. Since they’re not wrapped up in a war between the Autobots and Decepticons that’s gone on for thousands of years, they’re free to relax. They can smile. They can grimace. There’s no worry or strife when you’re a baseball cap that turns into a mechanical shark that looks like a Chain Chomp. 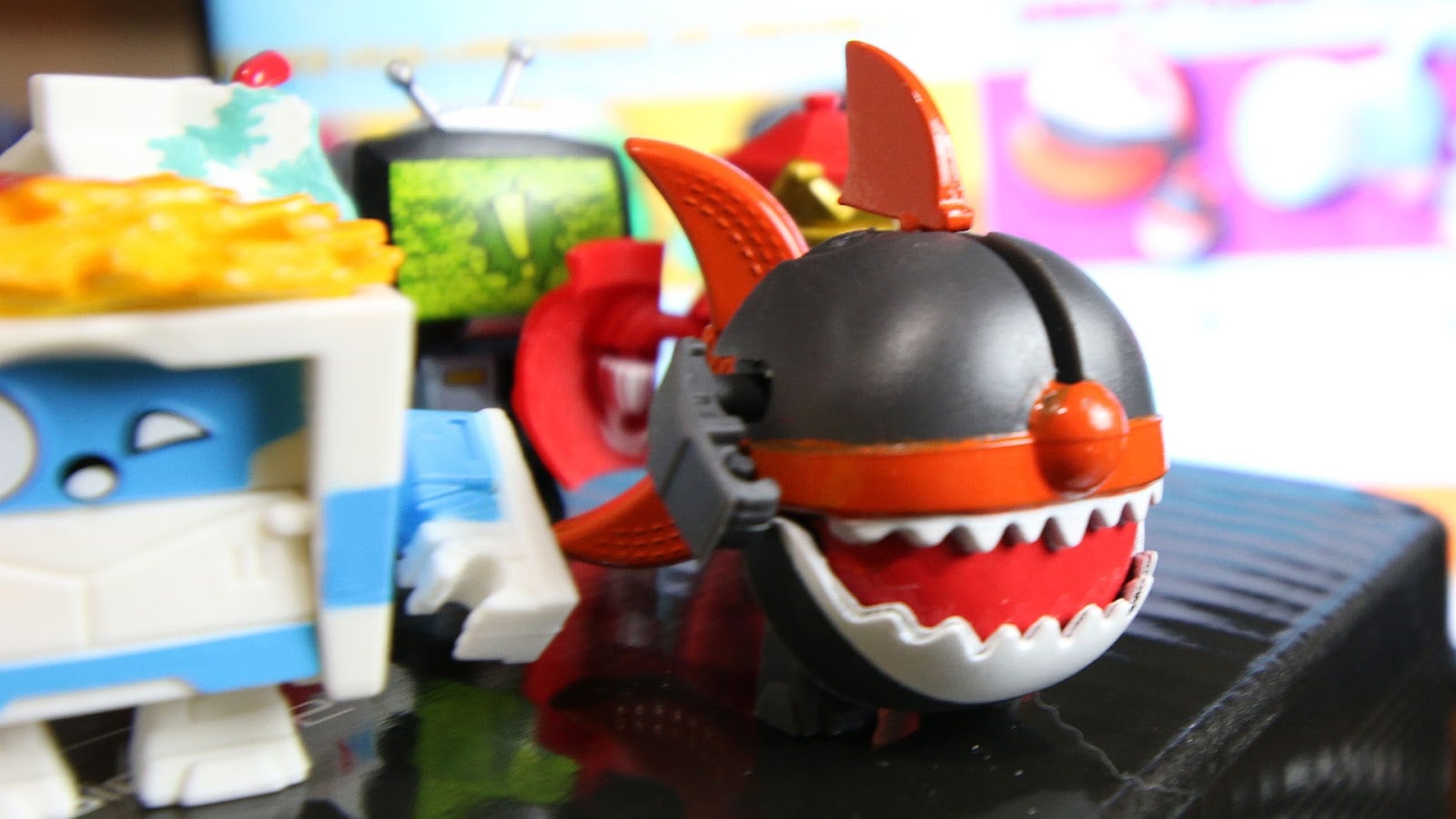 The toothy one there is named Ollie Bite. He’s part of series two’s “Swag Stylers” team. BotBots are grouped into teams based on the objects they transform into. The Techie Team is all electronics. The Greaser Gang is snacks. New to series two is the Spoiled Rottens, a group featuring several moldy or spoiled repaints of series one snacks. Hasbro plans to have over 190 of these things out by the end of 2019, so there’s going to be quite a few repaints and redecoes.

They’re small, they’re stupid, they’re irresistible. The second series is hitting stores now, and I’ve already collected most of them. I have to. I already own all of series one. I can’t stop now. I am lost.