Why This Week’s Darth Vader Comic Is Causing Controversy

Where Darth Vader: Dark Visions has gone, controversy has followed—mainly thanks to its origins after its announcement. But this week, it found itself enmeshed in an altogether different controversy.

Each issue of Dark Visions, like the scrapped Shadow of Vader’s intent before it, has looked to portray Darth Vader through a series of lenses, cast in the eyes of the people in the galaxy around him—alien beings who glimpse him on the field of battle, Rebel fighters who see him as a grim specter stalking their very existence, officers of the Empire to whom he is the universe’s most petrifying boss. This week’s third issue, by Dennis “Hopeless” Hallum, David Lopez, Javi Pina, Muntsa Vicente, and Joe Caramagna—titled “Tall, Dark, and Handsome” — casts the Dark Lord of the Sith not as an empowered foe or ghoulish reckoner, but as the object of affection of a low-ranking, unnamed female nurse aboard the Death Star.

Throughout the story, the nurse is looked on with a scornful attitude by not just the people around her — from Vader himself to her boss in the medbay — but also the narrative’s framing. She’s constantly given menial tasks to do, and dragged about and screamed at for failing to do them promptly by her superior. But we aren’t really invited to feel any sympathy for the nurse, because we don’t really learn anything about who she is as a person. We don’t even learn her name. But what we do learn, throughout her internal narration guiding “Tall, Dark, and Handsome,” is that she is desperately, madly in love with Darth Vader. 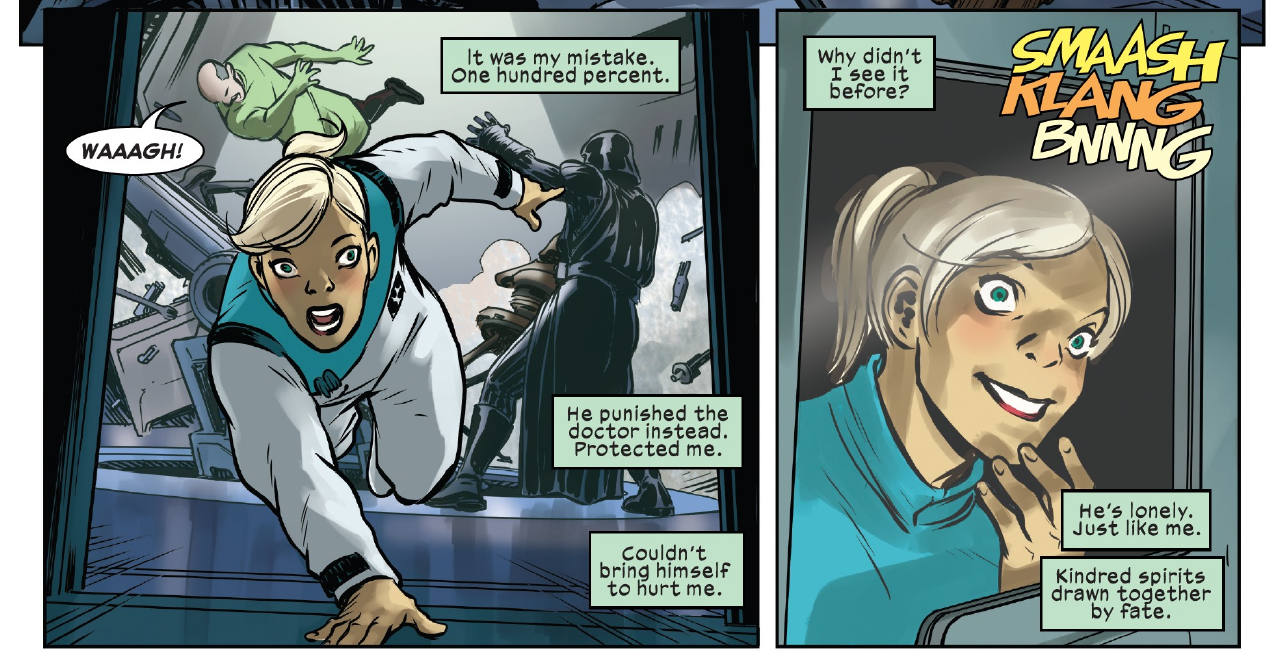 The nurse collects scraps of flesh and detritus from the medbay from Vader’s many visits, as trinkets of her affection. She shirks duties in the hopes she can catch a glimpse of him skulking down the battlestation’s many corridors. She fantasizes dancing with Vader, taking off his mask as the Christine to his Phantom. Eventually — after receiving another verbal dressing-down from the doctor for attempting to keep Vader’s cape for herself when he leaves it in the sickbay, leading to the discovery of her collection of Vader accoutrements — she fantasizes joining him as a Sith, clad in black and choking the life out of her boss when he throws her collection into the trash compactor.

It’s this loss that breaks the nurse entirely, leading to her diving knee deep into the garbage chutes in a vain attempt to find her memories of Vader — before marching right into the Dark Lord of the Sith’s private chambers, bleary eyed and desperate to get a glimpse of the man she is obsessed with. Her reward is the first time Vader directly engages with her in the story…by promptly thrusting his lightsaber through her chest and ordering a subordinate to come “get this garbage out of my quarters.” 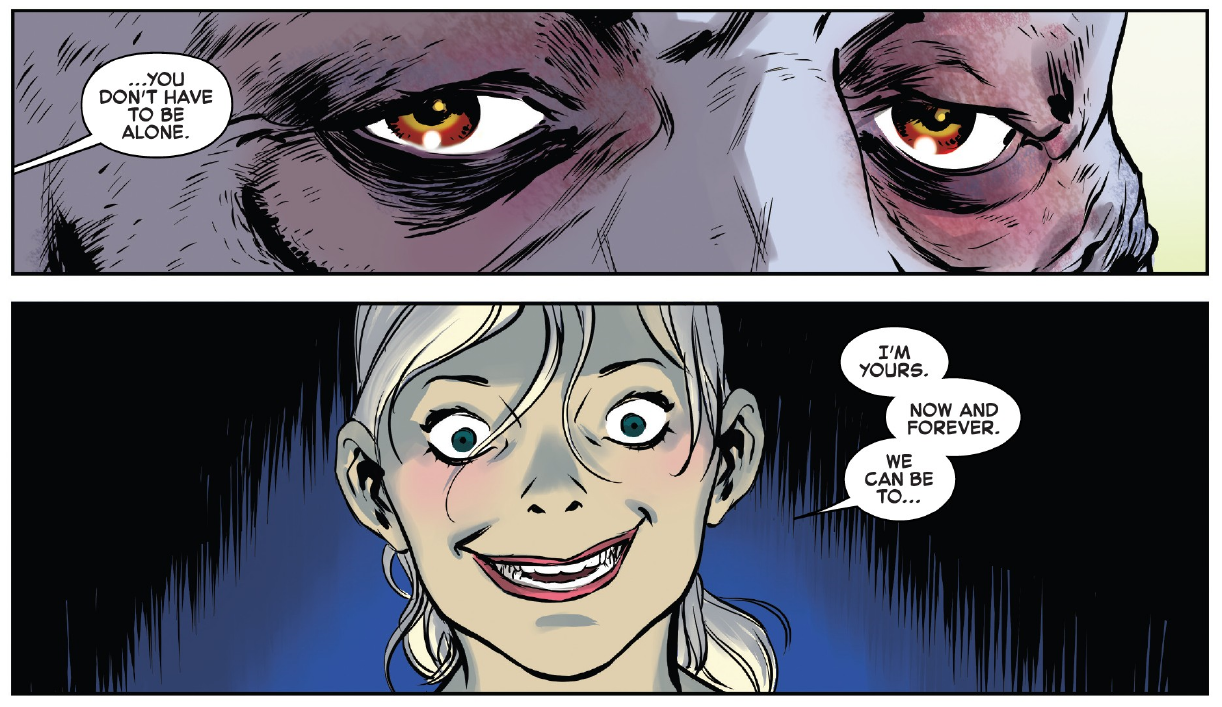 It’s hardly a magnanimous end for the nurse, but “Tall, Dark, and Handsome” is hardly magnanimous to her as a character. She isn’t painted as a sympathetic figure, but a deranged lunatic, looked down upon by the world around her (and that the world is right to do so) for her self-destructive delusion. Even in the fantasies where she is given a position of imagined strength, it rings hollow. It’s less of a love story and more of a dire warning about obsession—one that feels like it mocks its protagonist as much as the people around her do.

We're talking about it. pic.twitter.com/UuBmciyyoB

Reaction to the story online in the wake of its release has been…well, as you might expect from the headline of this blog, one filled with controversy—especially for female readers. A part of Star Wars fandom, and especially within female fan circles, that’s been around for as long as fandom itself are people who are fans of the franchise’s villains. From the Imperial cosplayers of 501st to Reylo shippers, there are people who champion these characters as their favourites as much as there are people who laud the heroes of the Republic, Rebellion, and Resistance — or fantasize about them (I mean, we all saw Ben Swolo, right?). Being attracted to villains is a tale as old as fiction itself.

And yet Dark Visions’ view of the nurses desires takes established feminine power fantasies and treats them as delusional jokes, right up until the moment it leaves its female protagonist a crumbled heap on the floor. Threads like the one above from female fans lambasting the story have even lead to Dark Visions writer Dennis Hallum reaching out to defend the nurse’s portrayal as one that’s meant to be heroic — and that the story is meant not to depict the medic as someone mentally unstable:

That really wasn’t my intention. I’m not here to police your read, but to me it’s about a person so beaten down and caged in by her fascist existence that she fantasizes about the only person in her world powerful enough to free her.

I read it as you were writing it. Your perspective is extremely informative, thank you for taking the time. I will say I don't think our medic is silly or crazy at all. In my mind she is the heroine of the story. It was not at all our intention to mock her or anyone else.

Which would be fair if Lopez, Pina, and Vicente’s artwork didn’t repeatedly depict the nurse as looking manic, even before her breaking point near the issue’s climax.

But what’s also what’s stoked the controversy around the story even further is that Chuck Wendig — the writer rapidly removed from Shadow of Vader when it was first announced despite having already written multiple issues, before the entire book was cancelled and replaced with the similarly-premised Dark Visions — also took to Twitter to make a comment. The author revealed that in Shadow there would’ve been a similar tale from a male perspective, framed as a commentary not on female obsession, but toxic masculinity:

Apropos of absolutely nothing, my issue three of SHADOW OF VADER was about a toxic fanboy (a morgue attendant on the Death Star) who became obsessed with Vader. (And it didn’t end well for him. Er, obviously.) I thought it was good and I’m sorry you won’t see it! Onward we go. pic.twitter.com/kFCb2nQ2Ia

Whether the story was inspired by Wendig’s pitch for Shadow of Vader or just a matter of awkward coincidence is unknown — when reached for a statement about reaction to Dark Visions #3 and Wendig’s statement, Marvel Comics declined to offer further commentary. It would seem that this is just the latest shadow Shadow of Vader’s cancellation has happened to cast over its successor.