Yesterday, prolific tweeters Brian and Ed Krassenstein were banned for life from the platform for allegedly operating fake accounts and trying to buy clout. The two brothers then took to The Hill Reporter to plead their innocence and mount a defence, which relied in part on their past enthusiasm for the Ouya.

The Ouya was an Android-based video game console shaped like a metal cube that raised $12,483,655 on Kickstarter in 2012 but years later ended up a massive failure.

As for the Krassensteins, they’ve been ubiquitous presences in the mentions of President Trump’s Tweets. The Krassenstein twins rose to prominence on the social media platform by quickly responding to Donald Trump’s tweets with timeless dunks like, “Three weeks ago you told us that Isis was defeated in Syria. What happened?”

They’ve occasionally tried to spin this popularity into gold, most notably by selling a children’s book about the Robert Mueller investigation which featured the former Special Counsel as a super buff, shirtless cartoon character. But something about the pair’s popularity never quite added up. Now, according to Twitter, that’s because it was mostly a scam, a characterization the two rejected in an op-ed posted to their news blog late yesterday.

Twitter claims the duo operated “multiple fake accounts” and purchased account interactions. “Engaging in these behaviours will result in permanent suspension from the service,” the platform said in a statement. 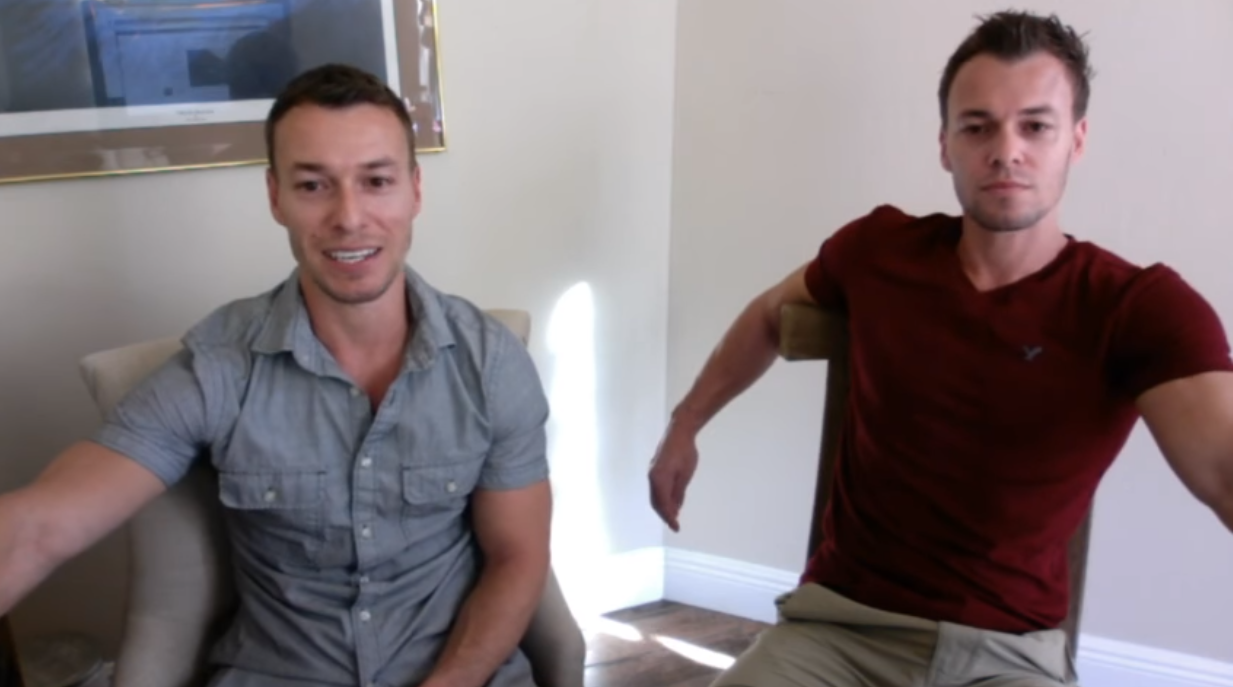 “We NEVER, and we want to make this as clear as day, ever bought or sold ANY Twitter accounts or interactions. We swear on our graves that this is 100% true,” the brothers wrote in an editorial published in The Hill Reporter today, a site the two helped co-found. They did admit to having multiple Twitter accounts, but listed only a handful, most of which they said were old and defunct.

“The two Twitter accounts mentioned above (@kstein2020 @FrankKern20) were old accounts. One was 12 years old and was an account we had used to tweet about an old Android video game system called the OUYA when we ran a news site about the system.”

While both @FrankKern20 and @kstein2020 accounts have been suspended on Twitter, a quick Google search reveals that @kstein2020 did indeed stan for the Ouya. “Are you a Fan of the OUYA Game Console from Kickstarter? Check out the OUYA Forum!” reads one of the 2012 tweets still cached in the search results.

The OUYA Forum appears to be the “news site” that the Krassenstein brothers are referring to. One of the admins is an account called Eddie K. which features a picture of Ed Krassenstein smiling. The account was started on July 27, 2012, just weeks after the Ouya was announced, and last posted on the forum on April 23, 2018. 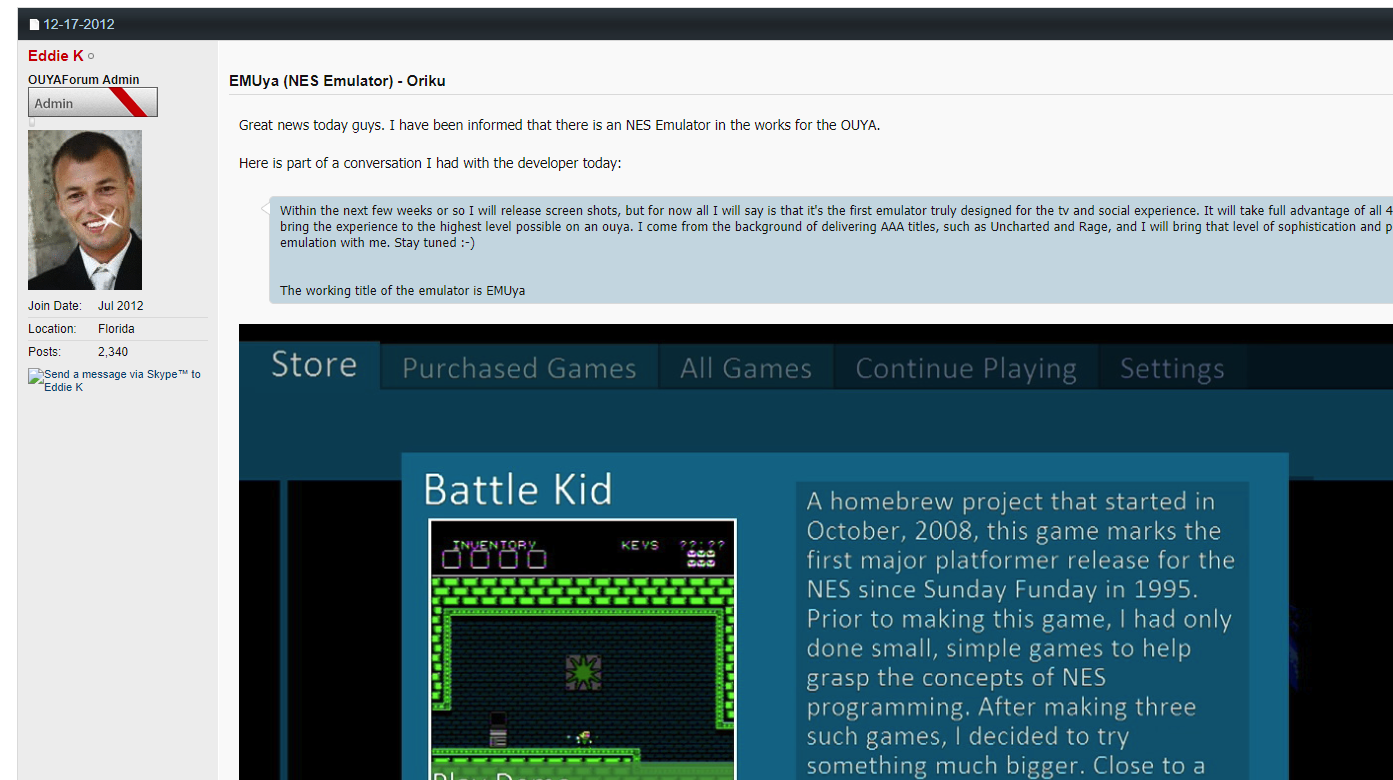 During that time Ed Krassenstein, or the strange Men In Black alien that sits inside operating him like a mech, posted over 2,000 times, sometimes announcing things like which retro gaming emulators were being worked on for the platform. It’s unclear how he acquired the information in these cases.

A lot of these posts appear to be Krassenstein simply updating the list of games announced to be coming to the console with links to their individual Kickstarters. “Just wanted to update you. These have been added to the list: Evilot, Fields of Fresh, Noble Path, The Battle Of Foundation,” he wrote on August 13, 2012.

“Thanks for adding my game, The Battle Of Foundation! Every little bit helps, posted a developer called Garret Mickley. Mickley’s game did not ultimately get funded, nor did any of the others mentioned in that particular post, with the exception of Evilot. Despite coming to mobile and PC, Evilot never actually got ported to the Ouya.

Razer, the gaming peripheral manufacturer that eventually bought the rights to the Ouya in 2015, recently announced that the console’s online store will be shutting down in June, signalling the end of one of the most ill-fated console experiments of our time. Is it any surprise that the Krassensteins, whose home in Florida was raided in 2016 by the FBI for their alleged involvement in promoting ponzi schemes, were also huge boosters for one of gaming’s most spectacular failures?

On his forum profile, under the section “What do you consider yourself?” Ed Krassenstein responded: “Ouya Owner.” His favourite game is apparently Double Dragon, which seems like a completely generic answer until you remember that Double Dragon stars two ripped brothers, Billy and Jimmy, who fight a gang of ninjas to rescue Billy’s girlfriend, the kind of dumb video game premise that seems to perfectly capture the extent of the Krassensteins’ political imagination.