If you were to ask Conan Unconquered, “What is best in life?” it might say back “To effectively manage your resources, build big walls, and hear the lamentations of your enemies when they see there’s another wall right behind the first big wall.”

Conan Unconquered is a new real-time strategy game that came out on Steam this week; it’s developed by Petroglyph Games, which consists of remnants of the team behind the early Command & Conquer games.

Not to be confused with Conan Exiles, the open world survival game, or Age of Conan: Unchained, the free-to-play MMORPG, or even Conan the Mighty Pig, which is also a game that exists, Unconquered has you build out a base and command a small army to defend it against enemy hordes, giant spiders, and other threats. It also plays almost entirely like 2017’s tower-defence strategy game, Numantian Games’ They Are Billions.

In Unconquered, you start out with a structure referred to as a Fortress that provides you a certain amount of gold, thralls, food, and command points every few seconds. These resources provide the starting blocks for you to build out your barbarian paradise. The Fortress itself must be protected at all costs from the waves of enemy attacks, which launch every few minutes. If it’s destroyed, you lose. 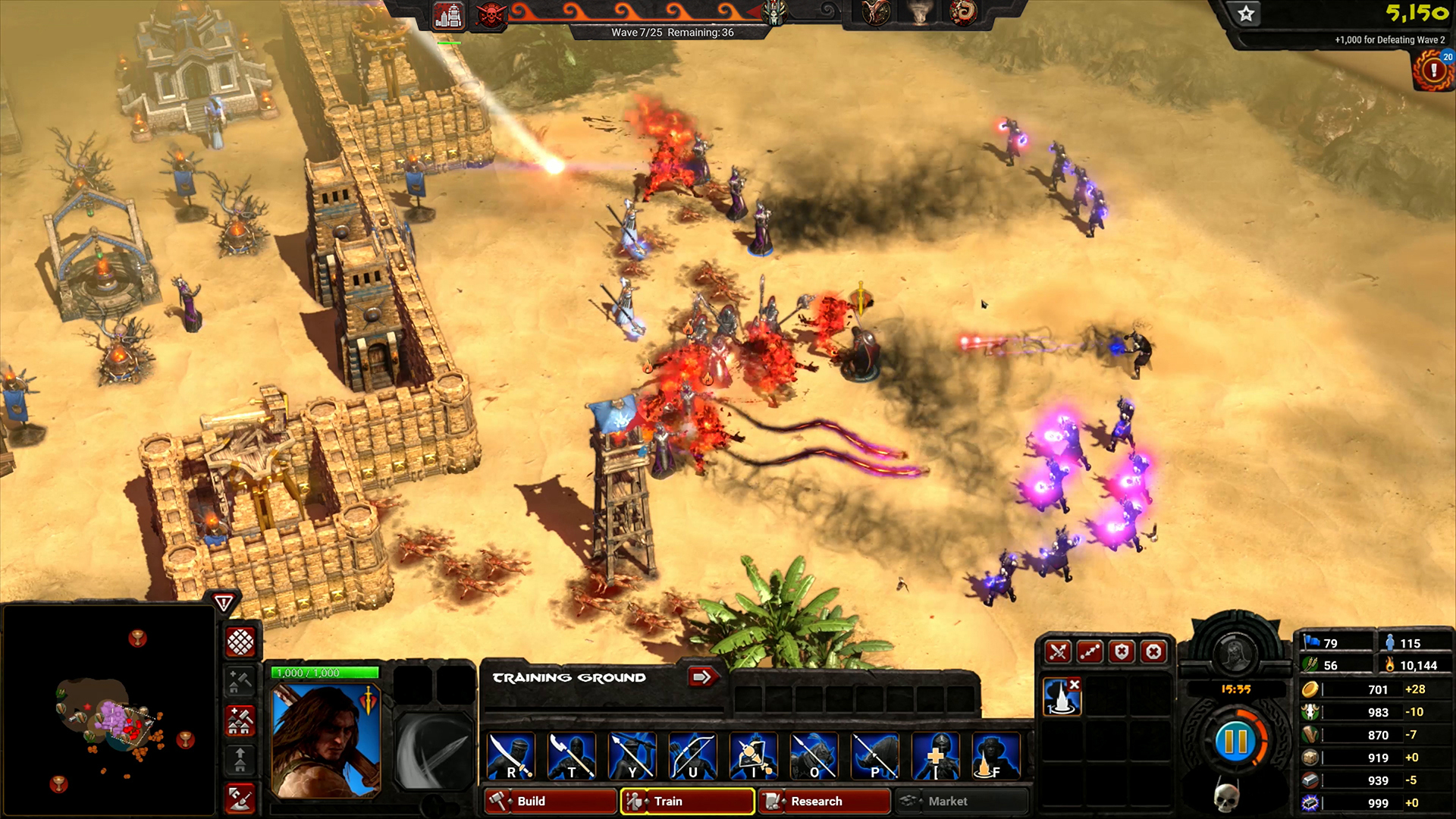 Placed in the centre of a procedurally generated map surrounded by fog, your first order of business is to begin walling off access to your Fortress where possible before the first horde of enemies shows up at your doorstep. You do this by moving around a pre-selected hero unit, like say, Conan (though Valeria and Kalanthes are also available), to uncover additional parts of the map.

In the process you’ll find treasure chests that can be looted, as well as ambient groups of scorpions or other hostiles who can be decapitated. You’ll also figure out the most strategic areas into which you should expand your base.

What makes this base-building interesting are the trade-offs involved while managing resources. Building new huts to add thralls and money will require additional wood and food. Increasing the number of farms and lumber yards requires spending extra money. And all of the units you build require a certain amount of command points, which are a resource that you accumulate by building more banners and which limit how big you can make your base at any given time and place.

After spending a few hours with it, I didn’t see much reason to mess around with Unconquered over They Are Billions.

Everything I’ve described so far is executed admirably enough, but it’s also almost exactly what you’ll find in They Are Billions, just with barbarians and palm trees in place of zombies and evergreens. Hero units are a unique and welcome addition, but they don’t feel as fleshed out as they could be, especially given that one of them shares a name with the game itself.

Conan can obliterate most early enemy mobs by himself, which is great since that saves more time for building and places less emphasis on getting a head start on recruiting an army. He can also lead your warriors out into the unknown to take on mini-bosses around the map, looting their corpses for magical artefacts that grant him special auras like helping to regenerate nearby allies’ health. But, overall, Conan doesn’t do much beyond stand somewhere and hack at whatever’s in front of him.

After spending a few hours with it, I didn’t see much reason to mess around with Unconquered over They Are Billions. Even for fans of Conan who might be more partial to its desert setting and paranormal mysticism rather than They Are Billions’ zombie setting, there’s just not much in Unconquered that actually takes advantage of that setting. You can’t even see your thralls wandering around your base, making the entire tower-defence endeavour feel a bit lonely. 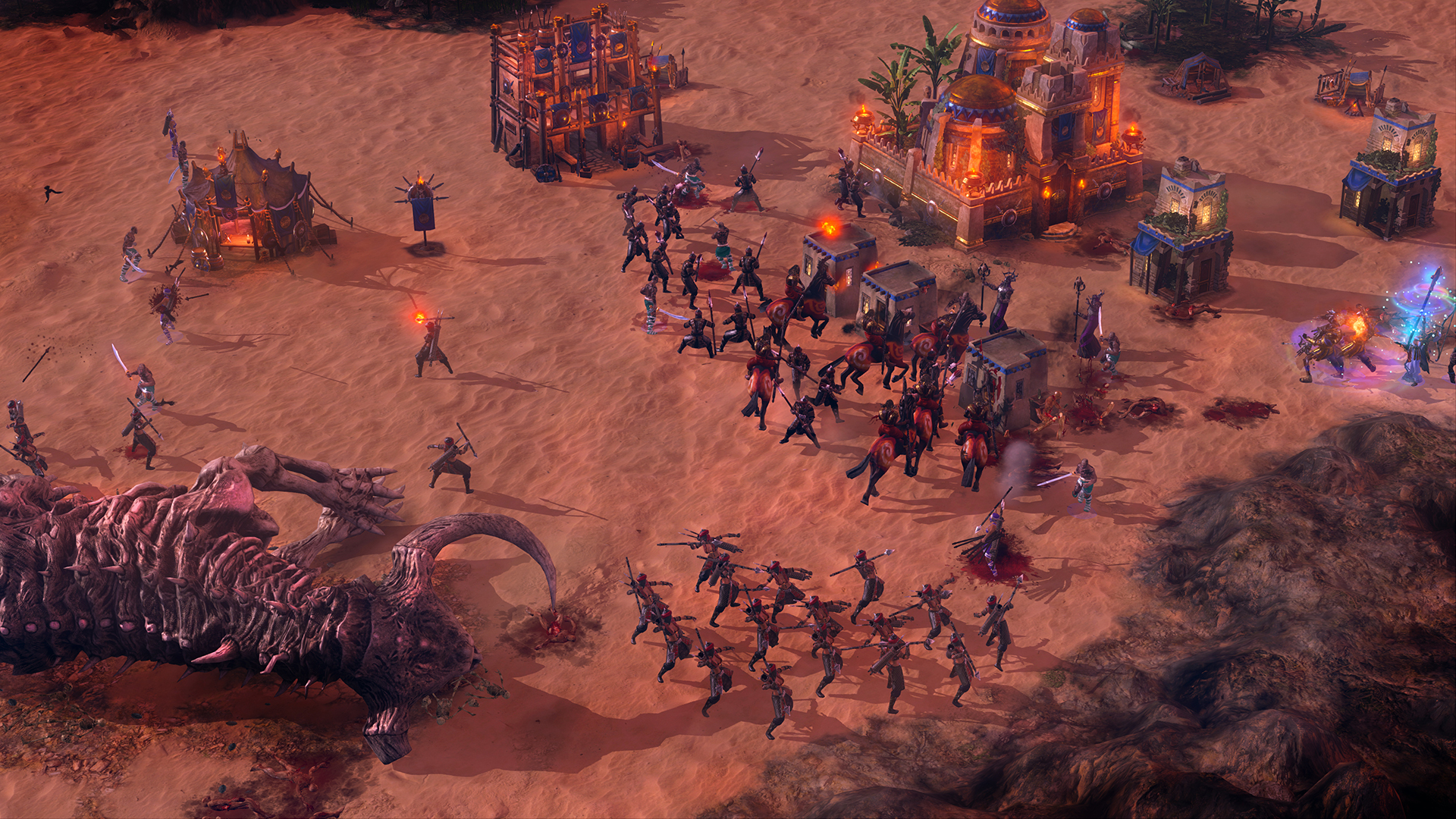 While you can’t control worker units in They Are Billions, they provide your base with a bustling sense of life and can become vectors for transmitting the zombie infection should they become overrun. This would sometimes lead to interesting situations where entire sections of your city had to be abandoned in order to stop the infection’s spread.

Your military units in Unconquered can catch diseases from rotting corpses and spread them to others nearby, but there’s no similar threat level. Instead, it’s just another number to be managed with an additional shrine building that heals nearby units.

Unconquered does feature online coop where two players can share control over all base-building and army moving responsibilities. That’s a major feature They Are Billions doesn’t have, at least not yet, and it creates some interesting possibilities like one person going out an exploring while the other continues building houses.

It’s not my preferred way to play, but I’m sure others will enjoy it, especially the They Are Billions fans who have been requesting multiplayer for months now.

When the first gameplay trailer for the game came out in March, Unconquered looked like it might combine some of the best elements of Age of Empires with the interesting modern twists explored in They Are Billions. Unfortunately, it mostly just feels like an uninspired imitation of the latter wrapped up in the retro look and feel of the former. To the extent that Conan remains unconquered, it’s only because I gave up playing.