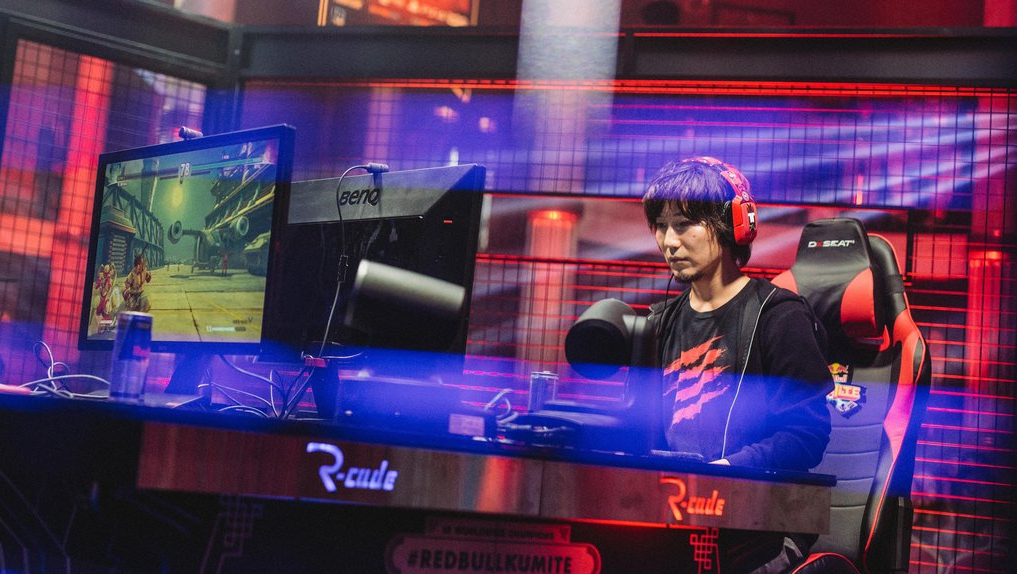 Photo: Red Bull
To sign up for our daily newsletter covering the latest news, features and reviews, head HERE. For a running feed of all our stories, follow us on Twitter HERE. Or you can bookmark the Kotaku Australia homepage to visit whenever you need a news fix.

Daigo Umehara is arguably the most popular fighting game player of all time. As such, eyes will always be on him when it comes to high-level play. The legendary Japanese competitor caused a stir recently by announcing his plans to try out an unconventional hit box controller instead of his traditional arcade stick at future events.

Hit box controllers are named for Hit Box, the company that first made them popular almost a decade ago. Instead of using a regular joystick, hit box peripherals handle directional inputs with the same buttons that perform attacks.

This gives users a better handle on their movement, thanks to the high quality microswitches found in normal arcade stick buttons as well as an easier, faster way to execute complex inputs, like the Z-shaped Dragon Punch motion that is common in many fighting games.

The Smash community has had a hard time coming to grips with these box controllers and debate still rages on as to whether they are fair or make the game too easy compared to a traditional controller.

Most of the wider fighting game community has accepted these controllers as legitimate competitive tools, some more begrudgingly than others, for years. That doesn’t mean it was an easy journey, however.

When hit box controllers first started to gain prominence, they were regarded, at best, as shortcuts to pulling off fighting game moves that normally took time and practice to hone. At worst, the use of these controllers was deemed outright cheating. It didn’t help matters when games like Marvel vs. Capcom 3 were discovered to handle simultaneous opposite cardinal direction inputs—otherwise known as SOCDs—in such a way that players who used hit box controllers could block in both directions at once, essentially eliminating the dangers of mixups and crossups.

SOCD is a term that pops up a lot when you’re researching hit boxes. While these types of inputs aren’t unique to button-based controllers—the PlayStation 4’s DualShock 4 controller, for instance, can perform the same technique by using the D-pad and thumbstick in conjunction—they do diverge from what’s possible on the fighting game community’s most universally accepted peripheral, the standard arcade stick.

To make matters more complicated, the way SOCDs are handled vary wildly from game to game. Marvel vs. Capcom 3 infamously allowed simultaneous forward and backward inputs, while Street Fighter V defaults to forward no matter which part of the controller is being used.

In order to standardise SOCD methods, hit boxes typically include what is known as a SOCD cleaner, which organises inputs in order to provide a predictable output. The most widely used SOCD cleaners make it so that Up+Down inputs default to Up, while Left+Right inputs cancel each other out.

Other SOCD methods also exist, most notably the second input priority method, which defaults to the last directional input that was sent to the game. It’s this method that made Daigo’s hit box briefly controversial, but the story began with someone else entirely.

Yusuke “Gafro” Hoshino is a Japanese fighting game player who has found a modicum of success at Street Fighter V events since 2016. After making it out of his group with no losses at the prestigious TOPANGA invitational in October 2018, Gafro shared the layout for his custom hit box controller on Twitter, which has extra buttons for forward and backward movement.

This garnered the attention of other Japanese competitors, and Gafro soon began sending out similar builds to players like Keita “Fuudo” Ai and Tatsuya Haitani before eventually opening up an online shop to sell his hit box design.

One of these sales was to Daigo, who learned the ins and outs of the peripheral during his regular Twitch broadcasts and soon showcased techniques that weren’t even possible on one of Hit Box’s original hit boxes.

With the added attention of Daigo’s platform, Gafro’s hit box was quickly met with scepticism. Why did it function so differently from what was already known about hit boxes? In response to the outcry, Kevin “Saunic” Souvanheuane, a French competitor living in Hong Kong, explained earlier this week that the hit box Daigo purchased from Gafro used the second input priority SOCD method, which is called the “last win” method in certain circles.

Due to this method, Daigo can, for example, perform a Sonic Boom command with Guile (charge back for a few frames and then press forward and a punch button) without ever releasing the backwards input, allowing him to return to charging for a follow-up Sonic Boom immediately.

It’s important to understand that Gafro’s hit box isn’t superior to normal hit boxes, but rather capitalises on different strengths while forgoing others. Sure, techniques to quickly charge Guile’s special attacks and supers are a breeze, but having simultaneous left and right inputs default to neutral, like in the original hit box controller, helps with things like the high-execution movement techniques of the Tekken series.

It’s all a matter of what a competitor prioritises in their gameplay; in fact, there already exist some hit box controllers that can switch between the two SOCD methods with a physical toggle depending on the player’s needs.

Although Capcom hasn’t responded to a request for comment from Kotaku, I’ve independently confirmed that Daigo will be able to use his Gafro hit box during Street Fighter V competition at Combo Breaker this weekend thanks to a legality ruling by the developer. Since Gafro himself has used his custom hit box at various official events before it became a minor controversy, it’s possible Capcom has had enough opportunity to research its benefits and deem it legal.

Hit boxes—both the official Hit Box product and home-made customs—have walked a difficult road in gaining legitimacy within the fighting game community. When the peripherals first got popular, it wasn’t uncommon for players to demand they be banned from high-level play. But over time, the scene has largely learned to accept and even embrace them.

As a longtime fighting game player, it is a little bittersweet to see the traditional arcade stick supplanted, but there’s no arguing the positives of the hit box, from competitive execution to ergonomic function. However, it might be wise for the fighting came community to advocate that fighting game developers adhere to one SOCD method before the community moves further into this increasingly murky grey area.