Marvel’s Uncanny X-Men #17, from writer Matthew Rosenberg, artist Carlos Gómez, and colorist Guru-eFX, is meant to be an issue about the kinds of evil and hatred the X-Men have sworn to protect their fellow mutants from.

Instead, it’s actually an example of how using mutants as a metaphor for persecuted minorities fails when the groups the mutants are meant to be standing in for don’t really exist in the comics.

Despite everything they’ve been through over the past few months, including Cyclops and Wolverine’s return from the “dead,” the spread of a vaccine that eradicates the X-gene, and X-Man effectively erasing the X-Men from the face of the Earth, the handful of mutant heroes left standing all come together in Uncanny X-Men #17 to mourn one of their own.

Rahne Sinclair, one of the original New Mutants, was murdered in Uncanny X-Men #16, and emotions run raw as the X-Men gather for her funeral. Given the existential threats facing all of mutantkind, a death scene has the potential to really hammer home the stakes the X-Men are up against. But the circumstances of Rahne’s murder undercut that potential, and instead draw attention to the concerning way that the violent deaths of women have become the centrepieces of Uncanny X-Men’s story.

While the bulk of the X-Men pay their respects at Rahne’s funeral and reflect on the relationships they had with her, Logan and a recently-returned Kwannon go off in search of revenge after Jaime Madrox tips them off that the police don’t plan on arresting Rahne’s murderers.

It isn’t hard for Logan and Kwannon to find the group of young men who killed Rahne, but what is difficult to deal with is how the comic depicts Rahne’s death.

Though Kwannon’s reluctant to show Logan, he insists she use her power of mental projection to tap into the four men’s minds and replay the night when the group crossed paths with Rahne. After she rebuffed one of their advances and revealed herself to be a mutant, the men attacked her.

Though the comic doesn’t explicitly frame the scene as a moment of transphobic violence, it’s almost impossible not to read it that way given the language and imagery it deploys. 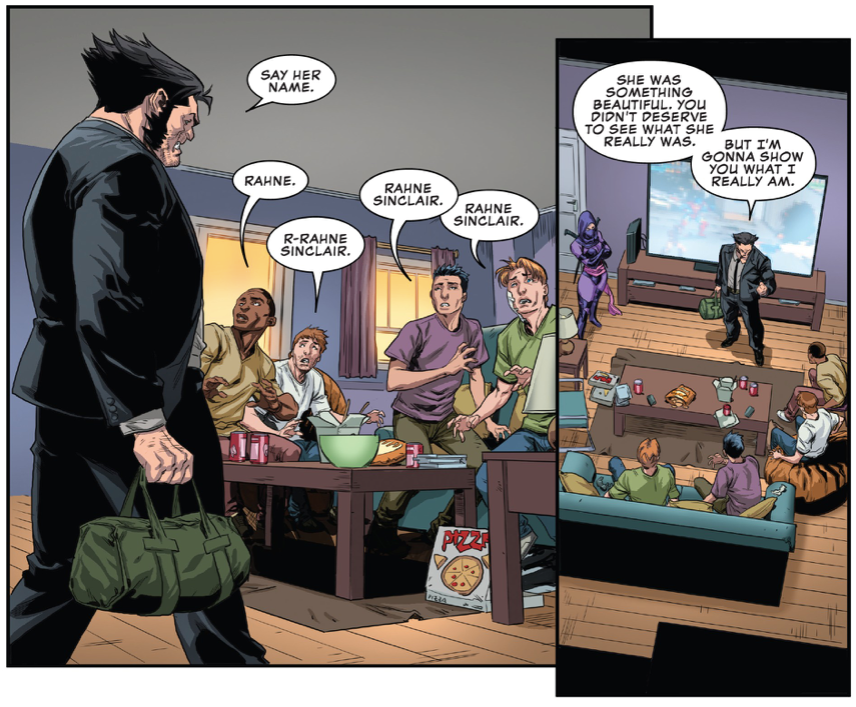 At first, Rahne’s attackers tease their friend for being attracted to a mutant, but their attention quickly turns deadly as they accuse Rahne of trying to “trap” and “trick” them, a bunch of “normal guys” into believing that she’s a “normal girl.”

These are the kinds of things that have been said as actual trans women have been brutally attacked by (almost always) men in a variety of circumstances, and Rosenberg obviously knows his script invokes that fact.

But, as Reed Puc accurately points out over at Comics Beat, the way the scene ends highlights the misguidedness of the entire endeavour.

Logan forcing the bigot murderers to say Rahne’s name doesn’t amount to much more than a hamfisted attempt at conflating anti-trans violence and the violence black women experience at the hands of police in order to present a singular, convenient metaphor.

Rahne’s the latest woman to die so that a male character has the motivation to go out and keep living, but the inherent queer-codedness of her death also underlines the fact that actual trans characters are largely missing from the Marvel Comics landscape.

The lack of proper trans representation (read: people who identify as trans) is a problem in and of itself, but especially so in this instance because in her moment of death, we’re meant to read Rahne as subtextually trans, not necessarily in terms of her self-expressed identity, but in what kind of person she’s meant to represent within the story.

The nature of Rahne’s metamorphic powers lend themselves to this kind of queer reading as well, but in this issue specifically, Rahne’s potential to be seen as trans is used to explain why she died. Before this issue, Rahne had come to the decision that she was ready to leave the superhero life behind and attempt living a regular life among baseline humans.

For that decision to immediately be followed up with a sudden and entirely necessary death is questionable on its face, but because of all the attempted metaphors, Uncanny X-Men’s failings are more than the sum of its parts.

Rosenberg, for his part, has responded to criticism of the issue in good faith, and recently took to his Twitter account to express his apologies to readers:

Also, if you've been reading our book and enjoying it, or disliking it I guess, I'd urge you to consider making a donation to @TransLifeline and help support the vital work they do.https://t.co/9PYNTF2HMF

It’s been said before, and it’s worth repeating now: These are the kinds of things that happen when marginalised groups aren’t represented in media on both sides of production. If you’ve actually got trans characters to work with, they’re right there and ready to be part of stories about trans people.

If trans writers are given the chance to tell these stories, they can craft them in ways that meaningfully reflect the experiences of trans people. Without either, Marvel — and others — will continue to miss huge opportunities to get these stories right.