It isn’t surprising these days to hear that pro wrestlers are into video games, but Kenny Omega, currently one of the world’s best performers in the ring, probably can claim that he’s into them even more than most.

Not many others can hold court about Mother 3 or are in a position to recruit talent to his upstart WWE competitor, All Elite Wrestling, during matches of Apex Legends.

Omega spent the week in Los Angeles at E3, crossing off what he describes as a “bucket list” opportunity to go the most news-making gaming show of the year. He used to live in Japan, where he was a star wrestler for many years and would take time to go to the Tokyo Game Show.

As he noted, however, “E3 is kind of the granddaddy; it’s the biggest one of them all”. Last year he was only at the show for 24 hours for a promotional panel at Capcom. “I played one level from Mega Man 11 and they allowed me to play the Resident Evil 2 demo.”

“This year, I set aside a week,” he said. “I’m here to talk about AEW, to play some games, to meet some people.”

Omega and I talked at the start of the week when we both appeared on YouTube’s E3 gaming show to talk about Bethesda’s conference. 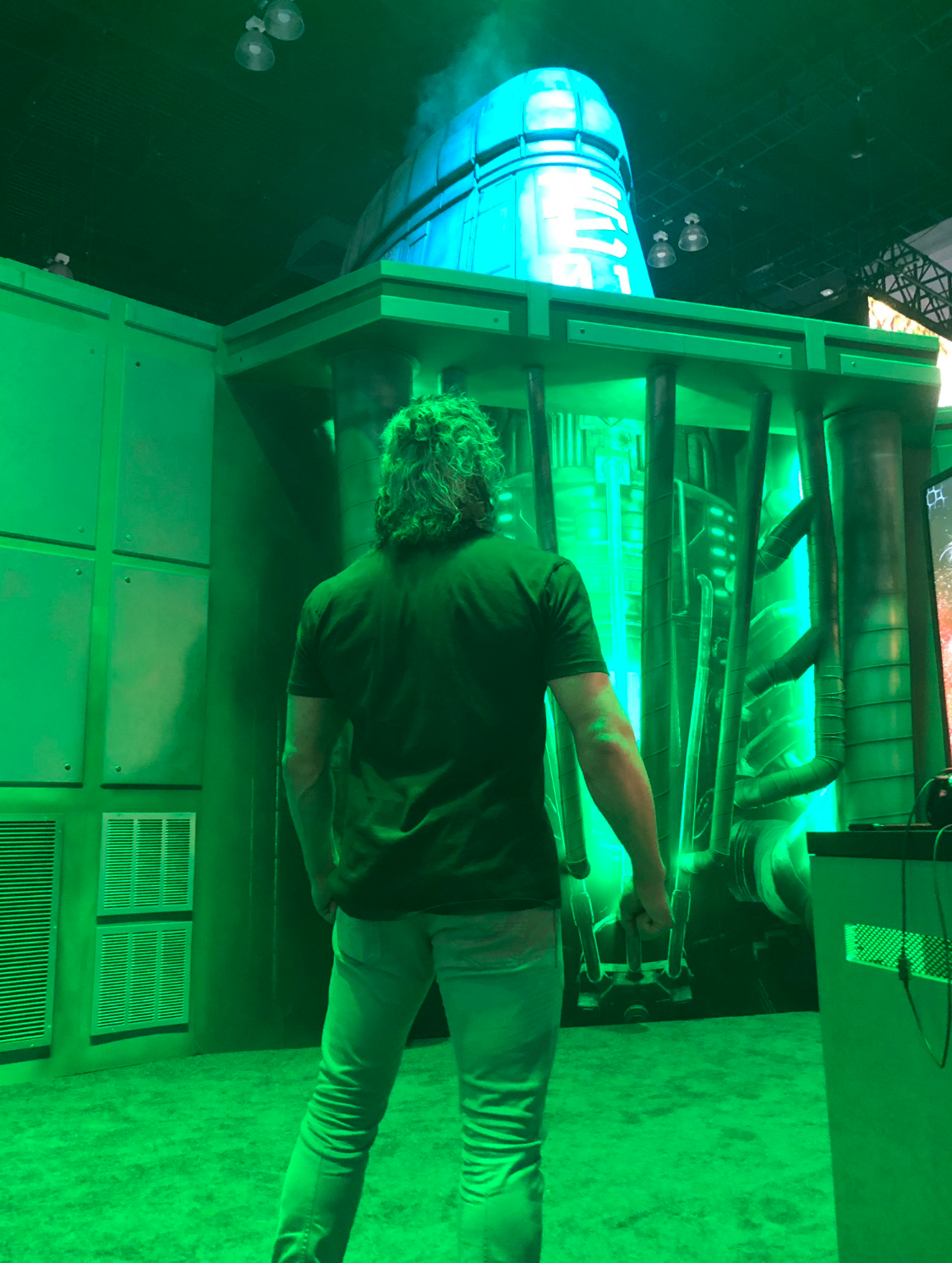 He was excited to see Cyberpunk and was hoping there would be something playable of Final Fantasy 7.

By week’s end, he’d rolled through Nintendo’s booth, played some Street Fighter 5 and even shown up on Giant Bomb’s marathon video show wrapped in a blanket.

Back on Sunday, we talked games. “The Mother series is my favourite series of all time,” he said, citing the Japanese role-playing game series that came to the West in the form of Earthbound, the renamed version of Mother 2.

As a kid he played Final Fantasy 3 and was confused by it. He found it grindy and difficult and preferred playing hockey games.

“It wasn’t until I stumbled upon Earthbound and its humongous box at my Blockbuster video,” he said. “I played it and something struck a chord with me and it captivated me. And I played it over and over and over again. My friends and I would try to speedrun it, and we never got sick of it. From then on, I was bit by the RPG bug and loved all things JRPG.

“I would play Mother 2 and 3 at least once every year. And I still find something new to enjoy about it. It still speaks of today’s culture in the West and of the East and sort of how they contrast with one another, how one’s perception of the other is kind of comical.

Omega says games were pivotal in helping him forge a distinct wrestling persona. Years ago, after ditching the idea of simply emulating the movesets of heroes such as Stone Cold Steve Austin, he cooked up a move called Croyt’s Wrath based on a manoeuvre from King in the fighting game Tekken 3.

In the game, the character chains two moves that Omega didn’t think he could do, but he tweaked it, combining the “electric chair” and “German suplex” into a unique combo.

The move is named after an old viral video featuring an uncommonly irate Halo 2 player, a video that’s more awkward to hear now given the homophobic slurs in it, something that doesn’t at all fit with the Omega of 2019, who is celebrated for making wrestling more inviting to LGBT fans.

Crowds liked that one, so, he said, he dipped into other gaming and anime influences. These days, one of Omega’s more prominent signature manoeuvres is a knee strike called the V-Trigger, after a term from Street Fighter.

Omega’s current fixation is the battle royale game Apex Legends. In fact, he’s so into it, and so determined to not lose playing time, that’s he’s found a way to integrate it into his wrestling work.

He’s a top decision-maker at All Elite Wrestling, a group started by him and his friends this year and bankrolled by billionaire Tony Khan. It’s slated for a weekly show on TNT this spring. AEW is hot, having, among other things, wooed top wrestler Jon Moxley from WWE (where he wrestled as Dean Ambrose) as well as others.

“One of the things I would actually do is, if you want to talk business with me, learn Apex [Legends], we’ll squad up, join a party and we’ll talk all the business you want while we play,” he said.

Has he recruited wrestlers to AEW while playing the game with them? “I may or may not have,” he said. “And there may or may not be more recruits via Apex Legends or some sort of other video game means where we can have a party chat,” he said.

“I’m not going to lie there are times when I’m playing with people online, whether it be just random people or it be people I’ve just set up sessions with and, via how they act online with me, I can tell this guy would be a handful backstage.”

He said he’s experienced the opposite as well, squadding up with people and having a pleasant experience. “You’ll get a feeling for how they interact with people, how they multitask, how they handle pressure, if they’re willing to help you out in a jam. You get an indication of how people really are.”

After E3, Omega’s next big crossover with gaming will happen at the CEO gaming tournament in Daytona Beach on June 29. He and AEW are promoting a multi-match card called Fyter Fest. It’ll feature Moxley’s AEW in-ring debut and be headlined by a six-man match featuring Omega and the tag team the Young Bucks against Mexican stars Pentagon Jr, Fenix and a mystery opponent.

Beyond that? More AEW, more games, and no doubt another playthrough of Mother 3.