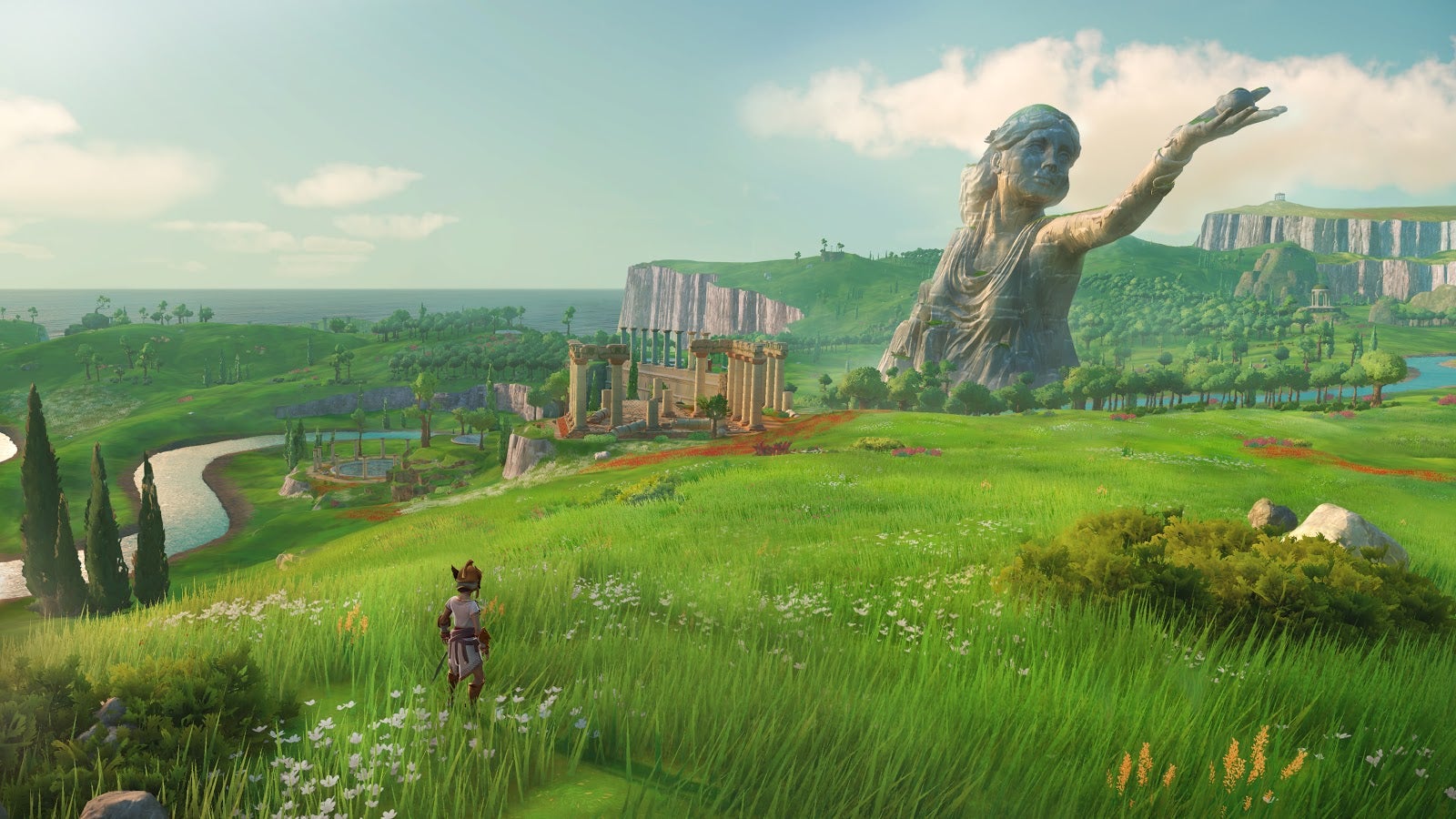 Somehow, the makers of Assassin’s Creed Odyssey are deep in development on a game that looks like The Legend of Zelda: Breath of the Wild crossed with Greek myth. It’s a big surprise, especially because the makers of Assassin’s Creed Odyssey just shipped a 100+ hour game last October and now they’ve got a gorgeous new one slated for February of next year.

“It’s the Odyssey team,” said Jonathan Dumont, the creative director of the surprise new Ubisoft game Gods & Monsters, as he answered my question about who was making it.

Gods & Monsters is an action-adventure game set on the Island of the Blessed. Players customise a character who can run around a vast world, jumping, swinging a sword, shooting a bow and arrow, floating from high perches using a special bird power, can use some sort of telekinetic ability to toss trees at enemies and has their movement limited by an exhaustible stamina meter.

If that sounds familiar, Dumont would say he’s flattered, as he did to me when I asked about the seeming similarities to Nintendo’s great 2017 Zelda game.

“It’s flattering that we can be compared to that, but from a storytelling point of view it’s going to be a very unique adventure,” Dumont said. “The abilities will change, as well as the scope of how it blows up. It is influenced a lot more by Odyssey in that sense mechanically. The fact that we can choose and create our own character and customise it as well, there’s quite a bit that will make it its own.”

When I saw the game, I was incredulous that the folks at Ubisoft Quebec could have another game slated for release so soon.

“We have been working very hard over the last 10 years to perfect our tools,” producer Marc-Alexis Côté said. “That’s one of the things we’re really good at in Quebec City: working on our dev processes, working on the toolset to make sure we can build games like this and make them amazing.” 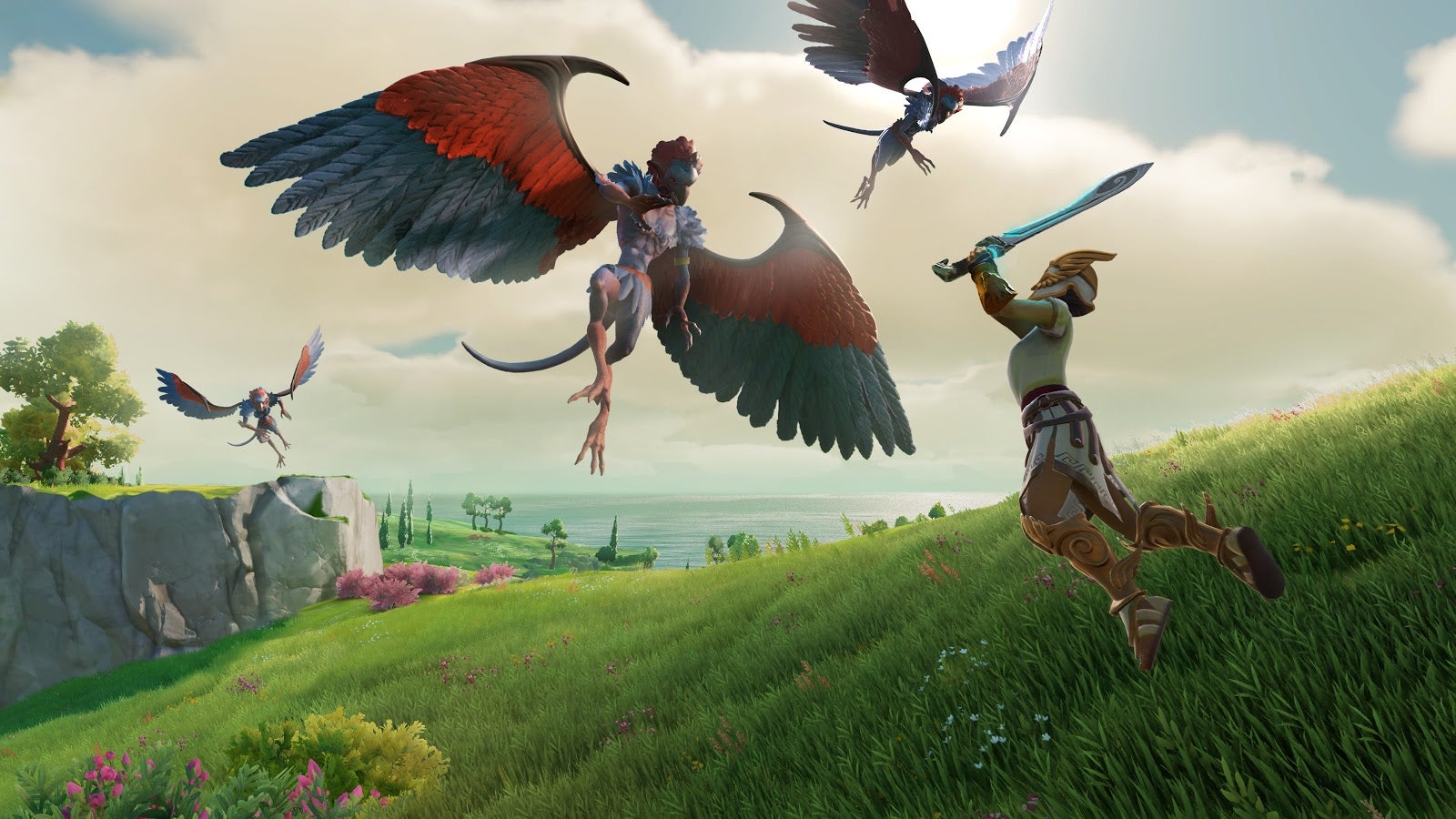 A Greek myth take on the model of Zelda, one of the greatest games of all time, isn’t such a bad thing. Distinctive elements include the idea that the game is presented as a tale told by the poet Homer to his grandchildren. Dumont and Côté said that the game trades heavily on the research the Assassin’s Creed Odyssey team did about Greek mythology while making that game.

Gods & Monsters is a more all-ages game than Odyssey and is illustrated with a bright, more painterly style. The player is the most courageous hero of all time, a character called Phoenix who can be equipped with special ability-enhancing gear and who will venture into the underworld to fight monsters of myth.

Dumont said the game has allowed the Odyssey team to play with character movement, to present challenges and puzzles that require the kind of clever traversal that Odyssey seldom asked of players.

The lead developers say the game has been in the works since late last year, and, despite it being slated for a February release, say it will be a full-sized action role-playing game.

Ubisoft always showcases some games to press behind closed doors in the first days of E3 week, and they often have a game that is shown even more exclusively to a small number of press. One year, that game was the returning Beyond Good & Evil 2, and all that Ubisoft was ready to show were walls of concept art and a tech demo.

Gods & Monsters was presented on Sunday in similarly limited fashion, to small groups of attendees and largely with slides and screenshots. Dumont did briefly take a controller attached to a phone and, using Google’s Stadia service, played a development version of the game (and it ran pretty well despite the venue’s spotty WiFi).

The game looked fun. It is simply shocking that it’s this far along and this close to release. The demo proved that it’s coming to Stadia. It’ll be out for Xbox One, PS4, Switch and PC as well. With no Breath of the Wild sequel on the horizon and Greek mythology still being pretty fresh material despite Odyssey’s existence, it’s a confusing if welcome E3 surprise.