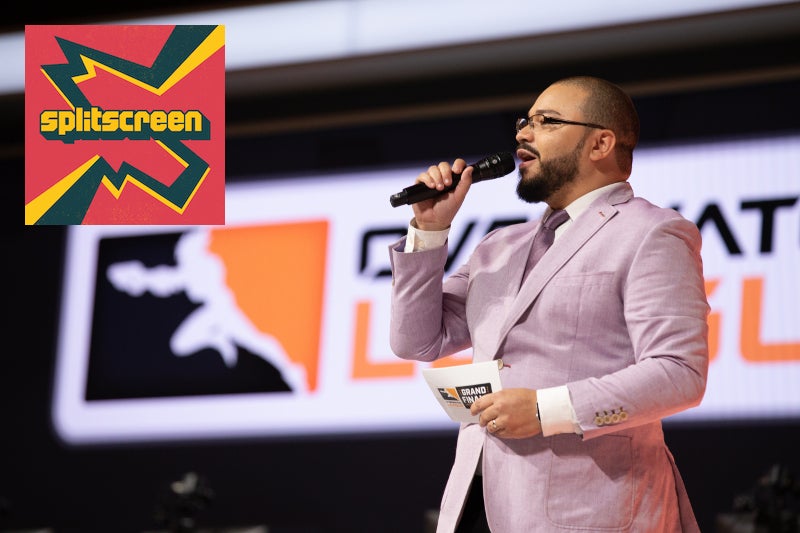 Alex “Golden Boy” Mendez hosts the sold-out <em>Overwatch</em> League Grand Finals at the Barclays Center in New York. (Photo: Carlton Beener, Overwatch League)
To sign up for our daily newsletter covering the latest news, features and reviews, head HERE. For a running feed of all our stories, follow us on Twitter HERE. Or you can bookmark the Kotaku Australia homepage to visit whenever you need a news fix.

Esports commentator and host Alex “Golden Boy” Mendez started out hosting Call of Duty tournaments in hotel ballrooms in 2011, and covering esports for websites such as Kotaku. Now, he hosts esports events in stadiums for thousands, as well as esports matches for TV broadcasts.

On this bonus episode of Kotaku Splitscreen, I interviewed Mendez on the E3 show floor about how much esports has changed and whether streamers and influencers are about to steal all the esports industry’s lunch money.

Maddy: I agree with you that franchising, at least with Overwatch League, is going way better than I thought it was going to go.

But I feel like the counterpoint to that is stuff like the rise of Fortnite and influencers as opposed to esports, and the idea of people identifying very strongly with a specific streamer or person that they like, as opposed to a team. I think that that is going to play out in an interesting way in the next few years.

Alex: I would agree. I think that Fortnite’s an interesting beast because we have a lot of players that have come up — guys like Poach, or Vivid, or 72Hrs, or Ayden — and these are pros that have created a brand.

But they’re nowhere near as big as Tfue, who is also a pro, but he’s also very much now a brand. Ninja, a brand. Nickmercs, a brand. And people do want to see them compete.

I think Fortnite’s structure and allowing anyone to be able to compete allows for that kind of freedom of expression with the fans. But when we get to the Fortnite World Cup in New York City, that’s going to be interesting, because if you look at the people who’ve qualified? Very few big names. Tfue qualified in solos. He’s probably the only big name.

You have some other names that are known amongst the Fortnite community, but for the most part, it is just pros. Kids. Fourteen, 15 years old.

Maddy: Do you think that’s because it’s not an invitational format and it is that qualification format, so it’s resulted in some randoms?

Maddy: Which is crazy!

Alex: Which is insane. But will that kid walk away with $4 million and all the fame? Maybe. But I still think that Ninja and those guys are gonna be pulling in all of that.

Maddy: They’re going to be pulling in the consistent income. I’ve been curious to see if more Overwatch League kids are going to spiral off and be like, “I’d rather go the influencer route,” because as they individually get famous, they might decide that that’s a more consistent way to make a living in esports.

Alex: Yeah. It is. It’s also weird in comparison to traditional sports.

Maddy: Yes! Like, that’s even an option in esports, that you could be like, “I’m just gonna stream.”

Like, sure, it’s starting to happen more and more now, but it is not — that was not an option. Whereas, Dafran played one season [of Overwatch League] and was like, “You know what? I’d rather stream.”

Maddy: “I could make some more money if I leave.”

Alex: And then that’s what he did. And now he’s more successful than ever.