The Coolest-Looking Fighter In Samurai Shodown Is Unfortunately Shit

Since its inception in 1993, the Samurai Shodown franchise has had its share of standout characters, like a child-eating demon, a quick-draw swordsman with tuberculosis, and a weird little dude named Nicotine Caffeine. For me, the coolest guy in the series is Kyoshiro Senryo, and although he managed to make the cut in last week’s release, this beautiful fighter has already earned the distinction of being the worst character in the game.

Kyoshiro Senryo has been part of the Samurai Shodown franchise since the very beginning, putting him in the company of iconic franchise mainstays like Haohmaru and Nakoruru. While he doesn’t typically play a huge role in the series’ overarching narrative, Kyoshiro’s background in kabuki theatre helps him stand out among the stern-faced warriors that make up much of the Samurai Shodown cast.

He incorporates the graceful movements of his art form into a fighting style that also features a deadly spear, fire-breathing, and the ability to summon a giant toad. These aspects of his design have only become more striking in the franchise’s recent PlayStation 4 facelift, but when it comes to competition, knowledgeable players have come to the conclusion that he sucks.

Longtime fighting game player Mike “Olaf Redland” Spragg has studied the latest Samurai Shodown since it was first revealed back in September 2018 and has been putting together extensive guides and sharing his thoughts online.

He recently collaborated on a preliminary character ranking with fellow competitor Cory Bell (who went on to place second during last weekend’s side tournament at CEO 2019), detailing the pair’s early thoughts on how the game’s cast shakes out power-wise.

It’s a pretty typical list, with various tiers marked A through D to designate each character’s relative strength compared to the rest of the roster. Kyoshiro, however, was given a ranking of his very own at the very bottom: TRASH. 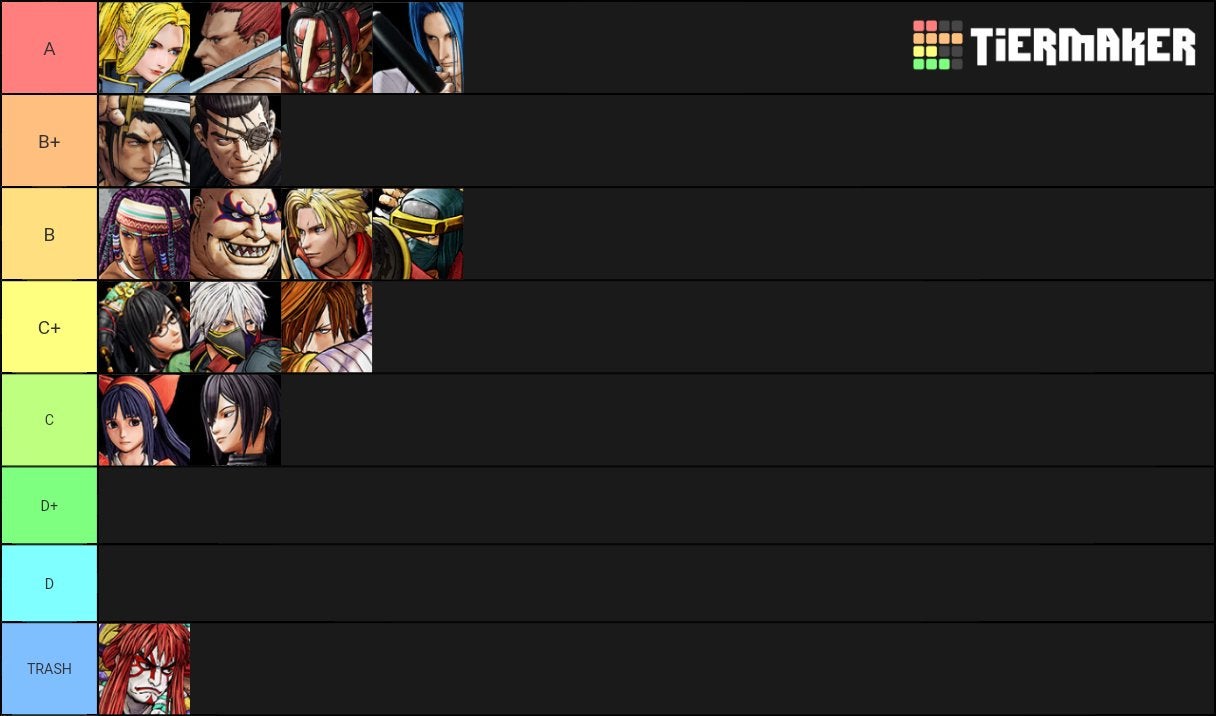 “[Kyoshiro] has to take far too many risks for his reward,” Spragg explained to Kotaku via direct messages. “Often times, his reward is low or average, but with moves that have far more startup or recovery than other characters, making them easy to react to or punish.

Crouching Medium Slash has as much startup as some Heavy attacks, his projectile doesn’t recover until it has travelled its full distance, and his uppercut attack (which lacks any invincibility and misses crouching opponents entirely) can be chased and punished easier than many other characters.”

Samurai Shodown is all about calculated risks. With mechanics like Rage in play, very few attacks are completely safe, and much of the game boils down to reading your opponent’s next move. Adding an extra layer of risk to an already stressful game effectively stifles Kyoshiro’s ability to compete on the same level as the rest of the cast.

It hasn’t always been like this. By all accounts, Kyoshiro was pretty damn good in Samurai Shodown V Special, the franchise’s most relevant outing, but somewhere along the way, the graceful kabuki dancer seems to have made enemies on the development team.

That isn’t to say Kyoshiro doesn’t still have his fans, even among top players. Julien “Wolfgang” Ingram, who has a history of playing unconventional characters like Sean in Street Fighter III: 3rd Strike and Blanka in Street Fighter V, is part of a growing Kyoshiro defence force.

He has very publicly stated that Kyoshiro is not trash, as many believe, and he even went as far as to change his Twitter name to “KYOSHIRO IS NOT TRASH” at one point to share this opinion with the world. Ingram admitted to Kotaku that Kyoshiro has a lot more risk associated with his moveset than the rest of the roster, but he doesn’t think that this hampers him as much as others would have you believe.

In Ingram’s mind, Kyoshiro is a highly defensive zoning character and needs to be played in a very specific way in order to succeed.

“Apart from the rest of the cast, he’s one of the few characters I believe will survive in the meta based on how you like approaching certain situations with his unique moveset,” Ingram explained over email.

“While not having many cancelable normals, it’s to be warranted that he’s generally not an up-close fighter without risk of exploiting a few setups that can fool even the most seasoned of Samurai Shodown vets. He should be played very methodically and unorthodox, taking advantage of players asleep behind the wheel.”

Fighting game developers now have the luxury of patching post-release, meaning Kyoshiro need not remain a bottom tier character for the rest of Samurai Shodown’s lifespan.

Spragg believes the character would benefit greatly from applying a short window of invulnerability to his uppercut to improve its usefulness as an anti-air, as well as some added damage or improved startup on his frog command grab. Meanwhile, Ingram would like to see Kyoshiro receive a fake fireball akin to Haohmaru’s, which could be used to bait opponents into jumping over a projectile that isn’t actually coming.

“It feels to me that they were worried about Kyoshiro being too strong out of the gate, probably for fear that he would annoy new players, so they preemptively nerfed him,” said Cory Bell, who partnered with Spragg in creating the aforementioned tier list, via email.

“It just doesn’t make sense to me, though, because almost all the tools they removed from him, other characters got to keep their similar (if not better) tools. Samurai Shodown is still an amazing game and I love it, but it definitely feels like some of the lower tiers could use improvements.”

Fighting game tier lists are often built over the course of years, with thousands of matchups between various top players serving as the foundational research. As such, it might seem too early for anyone to have these opinions of Kyoshiro, since this is all based on just a week of time with the game.

Still, Spragg justified that it’s a little easier to suss out the competitive viability of legacy characters. Kyoshiro lost in the same areas a lot of other characters gained, making the differences in each of the fighters’ power levels more readily apparent for players who are already intimately familiar with the Samurai Shodown franchise. The 2019 release is a completely different game, sure, but there are enough similarities to make an educated opinion possible very early into its life.

As far as Ingram is concerned, he plans to stick with Kyoshiro for the foreseeable future. He’s already found a modicum of success at his local events, and his history with characters who are widely considered weak has given him the dedication to soldier onward.

“If I can get top 8 with Kyoshiro at my local’s first Samurai Shodown weekly versus other solid players when everyone doubted him, you can play anyone you want and do fine,” Ingram added, summarizing his thoughts as a Kyoshiro fan.

“It just takes hard work that you have to be willing to put in, regardless of what anyone says. As a friend once told me: In the end, the game is about player skill, and being able to read your opponent as opposed to their character. If you have that talent, it doesn’t matter. Cross-eyed gang unite!”