Star Wars’ expanded universe lives to contextualise. It thrives on it. This is, more often than not, a “for better or for worse” kind of scenario — sometimes, a character barely explored onscreen gets to live a rich life in tie-in fiction. Sometimes, Star Wars becomes its own tiny ouroboros, gorging on its past instead of doing something new.

One of this week’s entries in the Age of Resistance anthology series from Marvel is a little bit of both.

The Age of Resistance: Poe Dameron one-shot — by Tom Taylor, Ramon Rosanas, Guru e-FX, and Travis Lanham — is set in the earlier years of the gap between Return of the Jedi and The Force Awakens.

The Imperial Remnant has signed the Galactic Concordance, the New Republic’s fleets are being broken down into smaller planetary defence forces: peace is upon a galaxy torn apart by war once more, and Poe Dameron, Commander of the New Republic Navy’s Rapier Squadron, longs for something more. He gets it, in the form of a civilian ship making a daring theft from the space station Poe and his fellow pilots are meant to be defending — a droid’s head, filled with important New Republic Navy Intelligence, gets swiped from under the feet of the undermanned, inattentive officers of Brooksdian Station. Poe and his squadron give chase, only to find that the mysterious commander of said ship is much smarter, cockier, and a more talented pilot than any of them expected.

In fact, they’re an awful lot like Poe Dameron.

Which, of course, makes Poe intrigued enough to do something incredibly reckless, chasing the ship off on his own into a nebula that almost leaves his X-Wing smeared onto the side of a meteorite. But that doesn’t matter to Poe, fixated as he is on believing that he’s the best pilot around, the lone hero of the day — whatever it takes to get his job done, he’ll do it, even if it means finding himself in the awkward position of needing help from his target when said nebula completely scrambles his X-Wing and BB-8’s systems, leaving Poe stranded and alone. 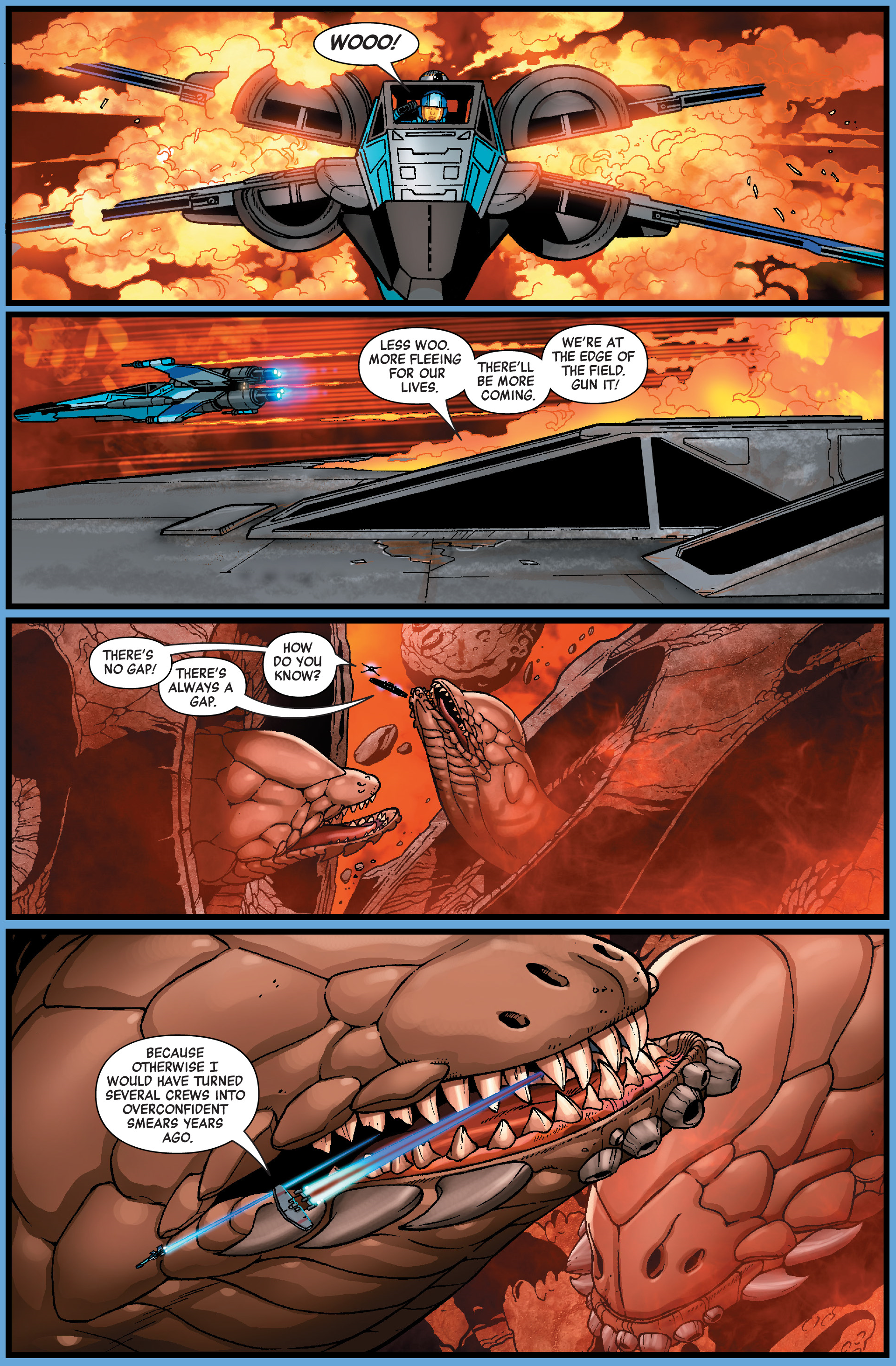 The thief’s ship ultimately guides Poe through multiple hazards, from minefields to space slugs, as Poe and the mystery commander of the ship begin to feel each other out over their comms. There’s a small spark, even if they’re technically on opposing sides — the commander is intrigued by a New Republic pilot who’s as gung-ho as Poe is, even if his devil-may-care-antics aren’t exactly what you’d expect of someone in command.

In turn, Poe is enchanted by the skill and expertise of the commander, guiding them through hazard after hazard with a seasoned experience that beguiles him.

Beguiles him a little too much, because the minute the two ships leave the Nebula unharmed, the civilian ship disable’s Poe’s hyperdrive, bidding him a fond farewell and a reminder that the New Republic isn’t the only faction on the side of good — there’s actually one out there willing to do more than ignore the rise of a second Empire. As Poe’s left to ponder the encounter, and his own recklessness, the identity of the mysterious commander is revealed: It’s just a passing moment — Poe doesn’t know just who he met really is, only the audience does. We’re left to make the assumption that, by the time he joins her in the Resistance, Poe has either forgotten the encounter or puts two-and-two together of his own accord.

But in its reveal that Holdo is the devil-may-care Resistance agent that may have inspired him to ultimately sign up one day in the first place, Holdo’s relationship with him in The Last Jedi is given an interesting depth, fleshing out the nuance of what was already there — an experienced figure of command, pushing Poe to realise himself how to improve, and cut through the bluster of heroism that could’ve cost him his life many times over. Even as they butt heads with each other, the same spark that defined their antagonistic relationship in The Last Jedi is mirrored here, but as one that helps inspire Poe. 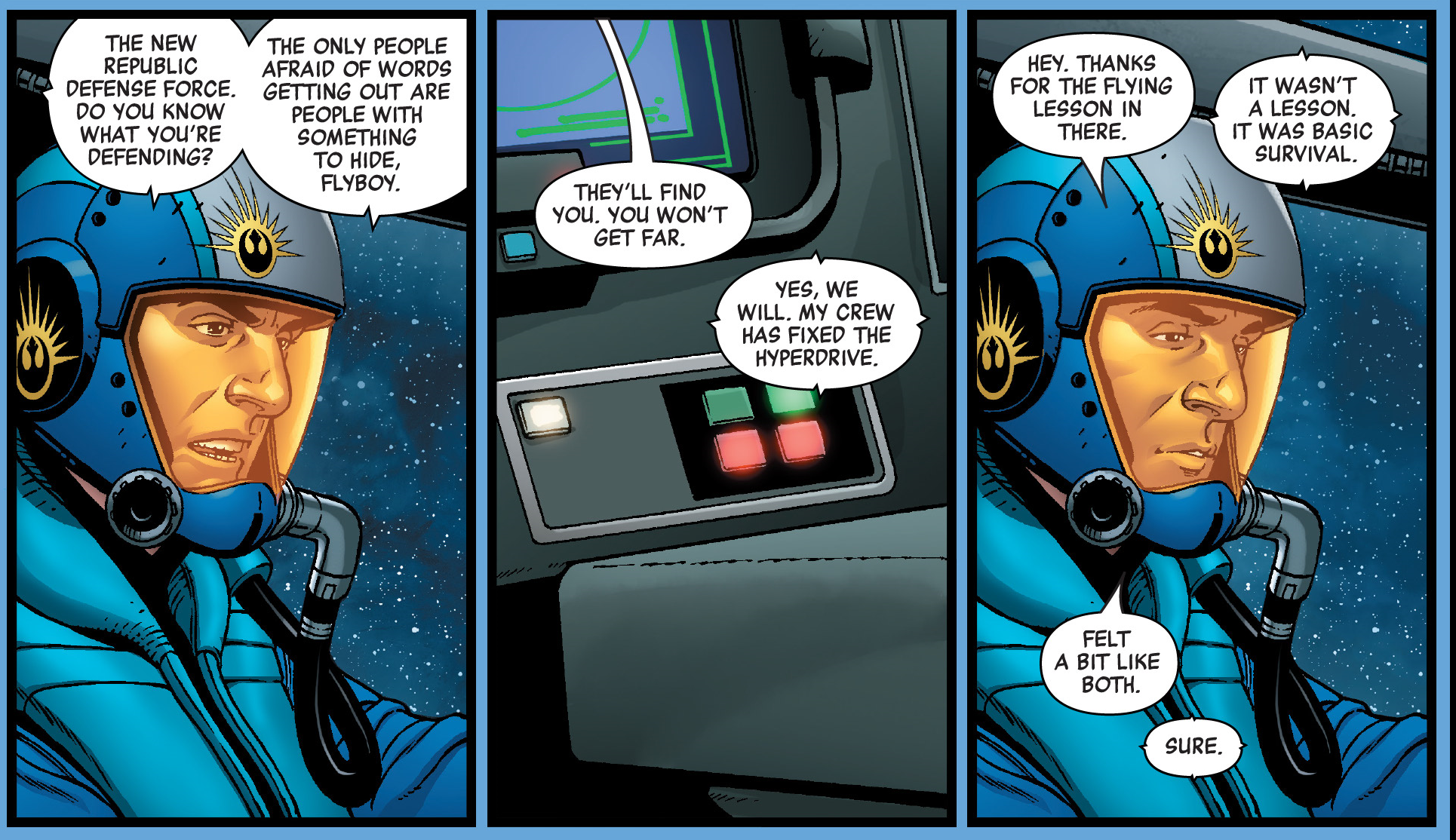 The galaxy far, far away has enough dead heroes — Holdo among them, by the time The Last Jedi is over. It’s nice to see that, from a nudge here and there from her, that she might have helped Poe realise that he needn’t be among them for heroism’s sake.