Before Destiny 2: Shadowkeep, Here’s What You Need To Know About Eris Morn 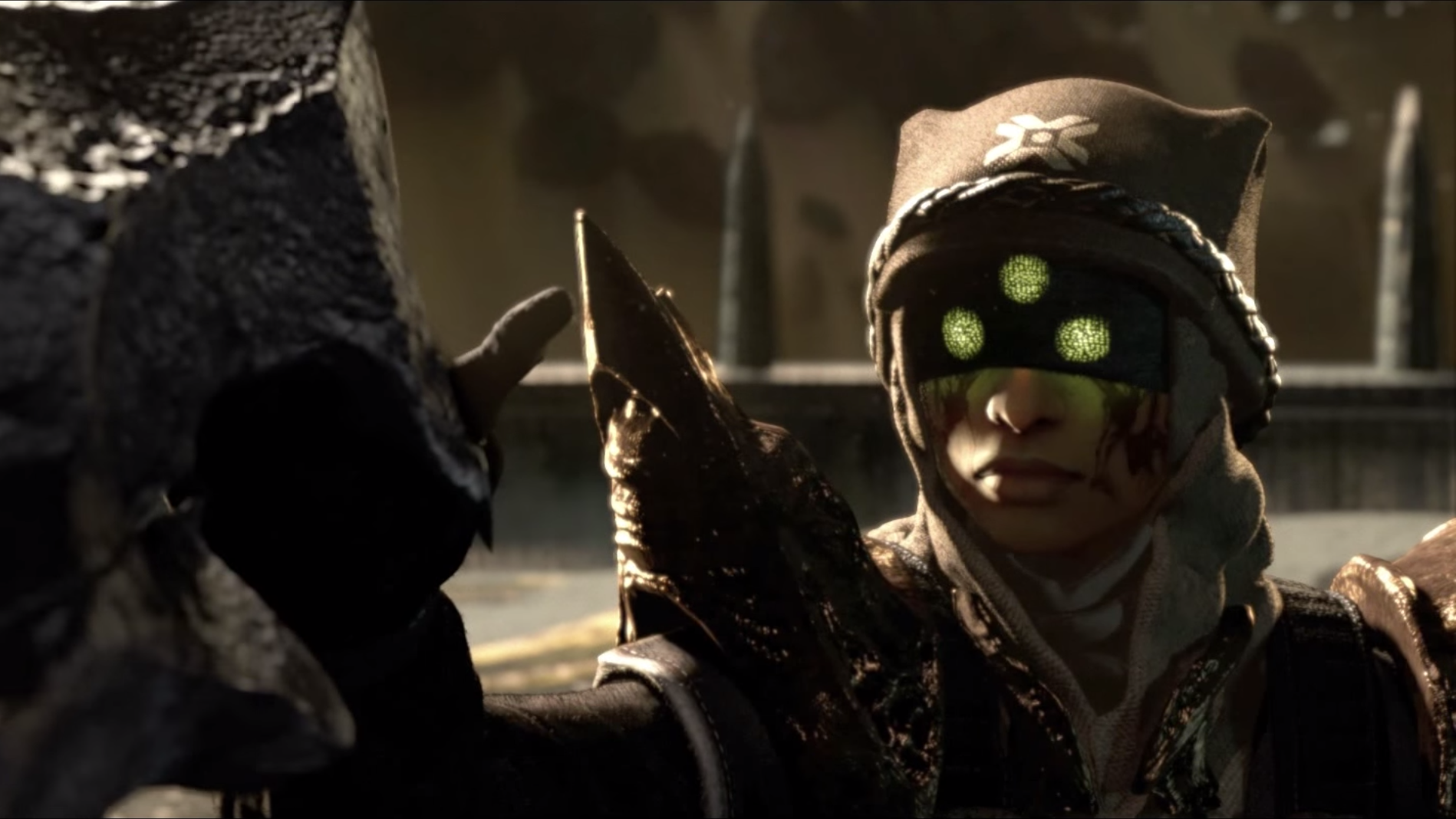 When Destiny launched in 2014, it wasn’t really a place you went for rich, interesting characters. Sure, they were around, but it would take some time before they’d be fleshed out. Commander Zavala, Ikora Rey, and of course, Cayde-6 are all much more memorable now than they were five years ago.

That’s not just because of familiarity — Bungie’s writers did the work, fleshing these folks out from their barebones introductions. But there are some characters that have largely been left alone, and with its forthcoming Shadowkeep expansion, which launches on October 1, Destiny 2 is revisiting one of its most controversial and compelling characters, Eris Morn. It’s the perfect time, then, to catch up on her story.

In some ways, Eris is a symbol of the old Destiny—pretentious, overly severe, and with zero self-awareness. She arrived in the game with the first expansion, The Dark Below (December 2014), an update most famous for breaking the Destiny endgame and making it very clear that the game needed to work out some pretty big problems.

This made her something of a bitter pill to swallow for Destiny players, which was a shame because, as anyone who read that game’s Grimoire cards could find, her backstory was truly haunting, one of the darkest turns lurking in Destiny’s hidden lore.

Thanks to fan projects like the Ishtar Collective, you can read all of the lore from Destiny/Destiny 2 and piece together her story. After first contact between Earth and the Hive took place on the Moon, Eris Morn became one of the Guardians at the forefront of the fight, determined to discover how to beat them. She formed what’s often referred to as “the first fireteam” that ventured into the Moon’s Hellmouth (the first Destiny really went for it) in a vain effort to kill the Hive prince Crota.

Unlike most of her fireteam, Morn survived, but only by hiding in the Hellmouth for an unspecified but very long time, during which she lost her Ghost and possibly her mind. Despite suspicions from other characters that her time among the Hive had corrupted her, she is also one of the only living Hive experts, and helps give Guardians like you the knowledge you need to beat Crota, and later his father Oryx.

That was it. Eris Morn, it is implied, continues to be active in the field working for the Vanguard Warlock Ikora Rey as one of her Hidden—a scattered network of informants that periodically send dispatches you can read about in lore entries—but the wheels of Destiny’s lore began to shift as the sequel came around in 2017, and the game took on a very different direction.

So Why Do I Need To Know This Now?

Destiny 2 really seemed like it was done with Eris Morn, and that move made sense. She was a good poster child for the least fun era of the game, a relic from when nothing in Destiny made sense and yet we still couldn’t stop playing. Quippy, charismatic characters like Cayde-6 took the forefront for Destiny 2. Often, the other characters would even poke fun at Eris Morn—and, by extension, the first Destiny’s bone-dry plot.

The main story of the game also couldn’t have been further from all this Hive stuff anyway: Destiny 2 has largely been about the Guardians’ struggle against a Cabal invasion led by Ghaul, commander of the Red Legion. Known as the Red War, it’s a straightforward story of death and rebirth, a soft reboot that doesn’t mess with what worked (mostly everything from The Taken King onward) and de-emphasises a lot of muddled ideas so they could be workshopped into something more satisfying (like the vague proper nouns of Darkness and Light and just what they mean in the game’s fiction).

In Forsaken, Destiny 2’s first major expansion that launched in the fall of 2018, some of those older ideas return—and Eris Morn is hiding among them, if you know where to look. (The answer to where to look is “lore books,” a new take on the first game’s Grimoire Cards, only this time you can actually read them in the game.)

While the main campaign of Forsaken is a space Western revenge tale where you seek justice for the murder of fan-favourite character Cayde-6, these books hint at something far more complex—a story of madness and unseen manipulators, working to unknown ends.

OK, How Deep Does This Rabbit Hole Go?

Here’s what we know for sure, per the official Shadowkeep page: Eris Morn got curious, and once again, something has awakened on the Moon. They’re called Nightmares, and honestly, they just sound like an excuse to remix foes you’ve already fought.

Pretty hum-drum. If you’ve been reading the lore though? There’s enough there to make you think you might find Pepe Silvia lurking underneath it all.

One of the biggest questions in Destiny lore right now is who the real puppetmaster is, or at least the biggest bad in the known hierarchy. Forsaken seemed to have a clear villain in the Awoken prince Uldren Sov, who appeared to be corrupted by the darkness.

Play through the Forsaken campaign and that story gets neatly resolved, only to be complicated by the endgame that takes players to the Dreaming City, where they puzzle over mysteries, take on challenges, and beat the Last Wish raid, learning that Uldren was not corrupted but controlled by a wish-granting ancient dragon called Riven of a Thousand Voices.

Riven herself is corrupted by the Taken, which ties Forsaken all the way back to The Taken King and introduces dozens of questions that we’d be here all day puzzling over if we wanted to.

Then, a cutscene added to Destiny 2 a few months after Forsaken’s launch revealed a Ghost reviving Uldren, who may now have to take the role of a Guardian, and will almost certainly play a pivotal role in story events to come.

Is There One Big Destiny Villain?

What’s neat about diving into all these disparate story threads is that, while at times it’s frustrating and wholly ancillary to the experience of actually playing Destiny, a lot of it seems to be pushing the game’s story in the direction of one big primary threat, one overarching villain who manipulates and upsets the various factions in the game’s universe in ways that give players a variety of interesting things to shoot.

So if you ascribe to a Unified Theory of Destiny Villains, you can read the whole game as the story of the fight between the family of Oryx, The Taken King, and the Guardians.

This is why the Destiny fan community is trying to piece together everything they can about a character known as Savathûn the Witch-Queen, Oryx’s sister. Savathûn has not appeared in-game as of yet, but she’s been mentioned in The Taken King Grimoire cards and her name pops up in various corners of both Destiny and Destiny 2–on patrol, in enemy titles, dialogue snippets, and lore entries. Eris Morn is a big part of one of them.

The lore book “Truth to Power” presents itself as a dispatch from Eris Morn, at first telling you about her personal backstory growing up in St. Petersburg, Russia long ago. But as you go through the story, it becomes apparent that something’s amiss, and it’s never really clear who you’re hearing from — at one point it might be an AI, at another it might be an agent of Savathûn, all of them describing the machinations of the Taken in the Dreaming City, and how they relate to a grander scheme.

The final dispatch, however, claims that they all really were from Eris all along, leaving you unsure what to believe — especially since Morn claims they are all forgeries in another, related lore entry.

How can I prove to you that I’m really Eris Morn? Not Medusa, not Riven, not Quria, not Dûl Incaru, not the Witch-Queen Herself? I don’t know. Will you believe me? Will you scour these pages for proof or disproof … Will this manuscript become the foundation of another teetering edifice of theory and anticipation?

Of late, Destiny’s lore has become fond of unreliable narrators. If Destiny’s main plots are straightforward sci-fi adventures, then the ancillary plots that spiral out of its lore books are a pile of non-linear detective work, an array of documents that may or may not be related with a confounding level of plausible deniability baked in.

You could dismiss Eris, and everything about her, as a pile of gobbledygook you need not pay mind to as you spelunk the moon and kill space zombies when Shadowkeep drops in October. But there’s a lot of room for payoff here, a possible resolution to one of Destiny’s grandest tragedies — the story of a woman who went to war and was completely broken, but still helped vanquish one of the universe’s greatest threats even as her colleagues doubted her sanity. Her impact is immeasurable, but her reputation is also irreparably damaged—and that might be played against us.

Destiny 2 has been experimenting with giving players choices, and basic as those choices currently are, you can get a lot of mileage out of a simple question. A question like: when Eris Morn comes back, will you trust her?