Rad takes place in a futuristic neon wasteland with an ‘80s vibe, where survivors power their homesteads with the technology of past entities called Menders. It’s a roguelike, made by Double Fine and Bandai Namco, in which you choose a character and set out into the wilds to restore the power, fighting mutant creatures along the way. Underneath its unique personality, Rad is a pretty standard but mostly satisfying roguelike.

Rad has all the roguelike staples: multiple worlds to fight through, a map that changes every run, the loss of loot and abilities upon death. The game’s currency is cassette tapes, which you find around the world. When you return to the game’s hub between wasteland expeditions, you can bank these cassette tapes. They’re worth accruing, because you can use them to buy health and other powerups, found in hidden shops throughout the level. Floppy disks are another currency, functioning like keys to unlock secret areas or loot-containing chests.

When you kill monsters, you accrue “rads,” short for “radiation,” which function like experience points. When you have enough rads, your character gets a random mutation. These can be active powers: the ability to chuck your explosive head at bad guys, leave a trail of toxic slime in your wake, or birth mutated babies of yourself to fight alongside you. Or they can be passive: resistance to fire and toxins, the ability to spot what treasure will drop from a destroyed object, the chance to get health when you kill enemies. The animations of these powers in action are enjoyable to watch, and the powers are fun enough to use. I’m especially fond of petting my mutant spawn to restore their health.

In my playthroughs, I seemed to get the same few powers over and over rather than having different combinations every time. I mostly hoped for mutations that gave me ranged attacks. Without them, getting close to enemies meant falling prey to attacks, toxic ooze, or death explosions I couldn’t escape from in time. In addition to getting mutations in the course of combat, you can also get them from statues hidden in each level’s underground bunker network. More mutations have been essential, but I’ve found the caves tedious and confusing to navigate, even with the minimap. 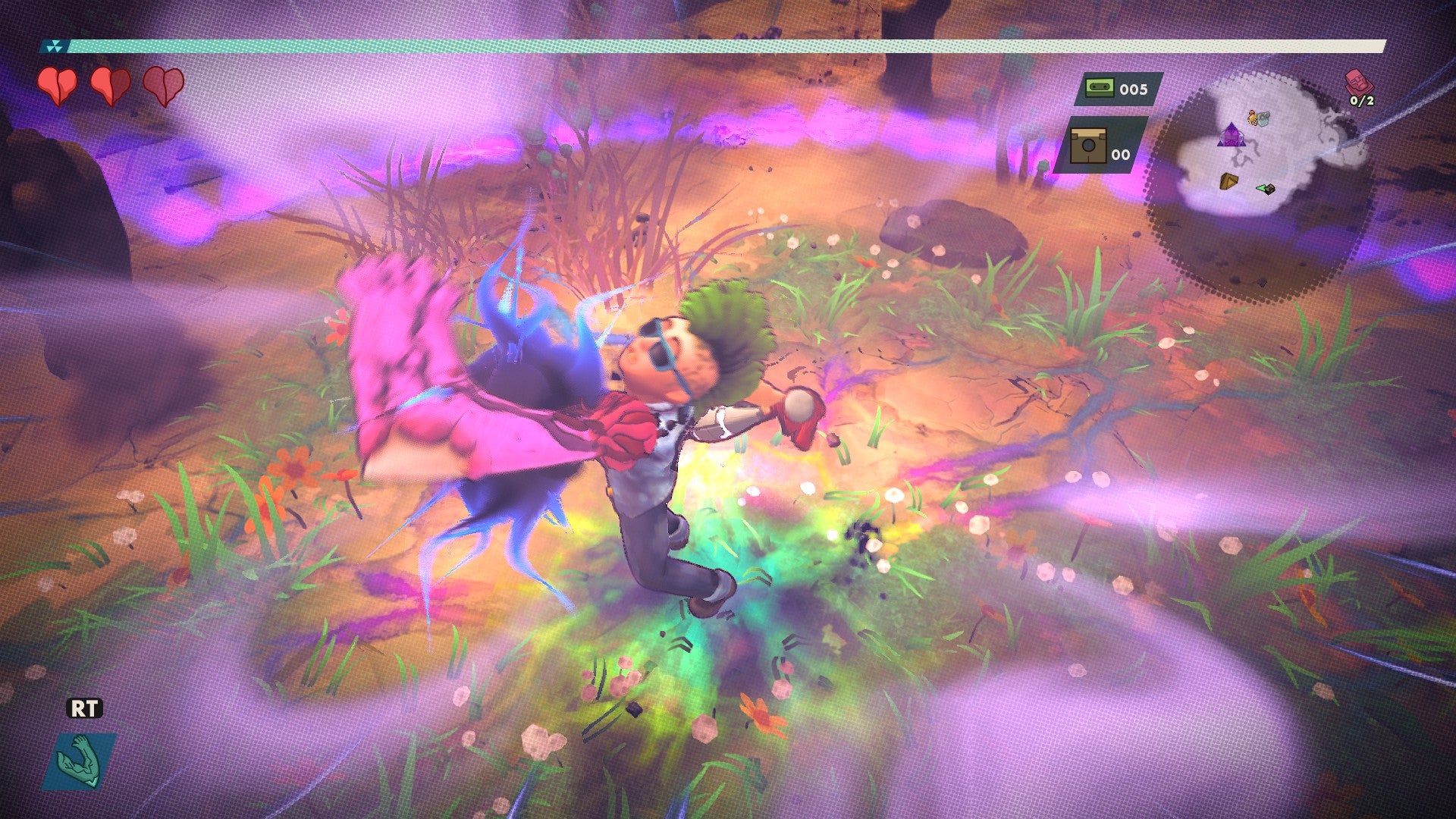 Mutating after getting enough rads

Despite Rad’s bright colours and environments full of hair-band personality, navigating the map got stale quickly. Each level has a number of statues you need to activate to unlock the gate that lets you leave the level. Once powered up, the statues emit a glowing laser that points the way to the exit. It’s unfortunately hard to see that laser given the game’s static isometric camera, though its direction is at least visible on your minimap.

Finding all these statues almost inevitably requires going into the bunkers, which connect via different-coloured teleporter pads. I spent more time than I wanted to wandering through the tunnels, trying different teleporters and looking for entrances to parts of the network I hadn’t accessed, all in hopes of coming out in a new part of the map and finding the last machine.

Exploring the level to find mutations and get rads from killing enemies is part of the fun, but wandering around to pick up that last machine is not. As you activate machines, you sprout flowers in your wake to let you know where you’ve been, but repeated backtracking through dead ends made this navigational tool just one more reminder of how lost I’d gotten. Often, this wandering also meant losing health to enemies, health I’d hoped to preserve for each level’s final boss fight.

Combat in Rad seems basic, but it’s not easy. You have a melee weapon and some core moves: a regular attack, a jump kick, a ground slam, and a chargeable spin attack. Most of these moves are taught via tips in the game’s loading screen, making their existence easy to miss. The areas you fight in can sometimes be crowded, meaning it can be hard to get the chance to pull these moves off; the fixed camera can again make things difficult here. Your best bet is to fight patiently and strategically, keeping your distance whenever possible and using your mutations to your advantage. 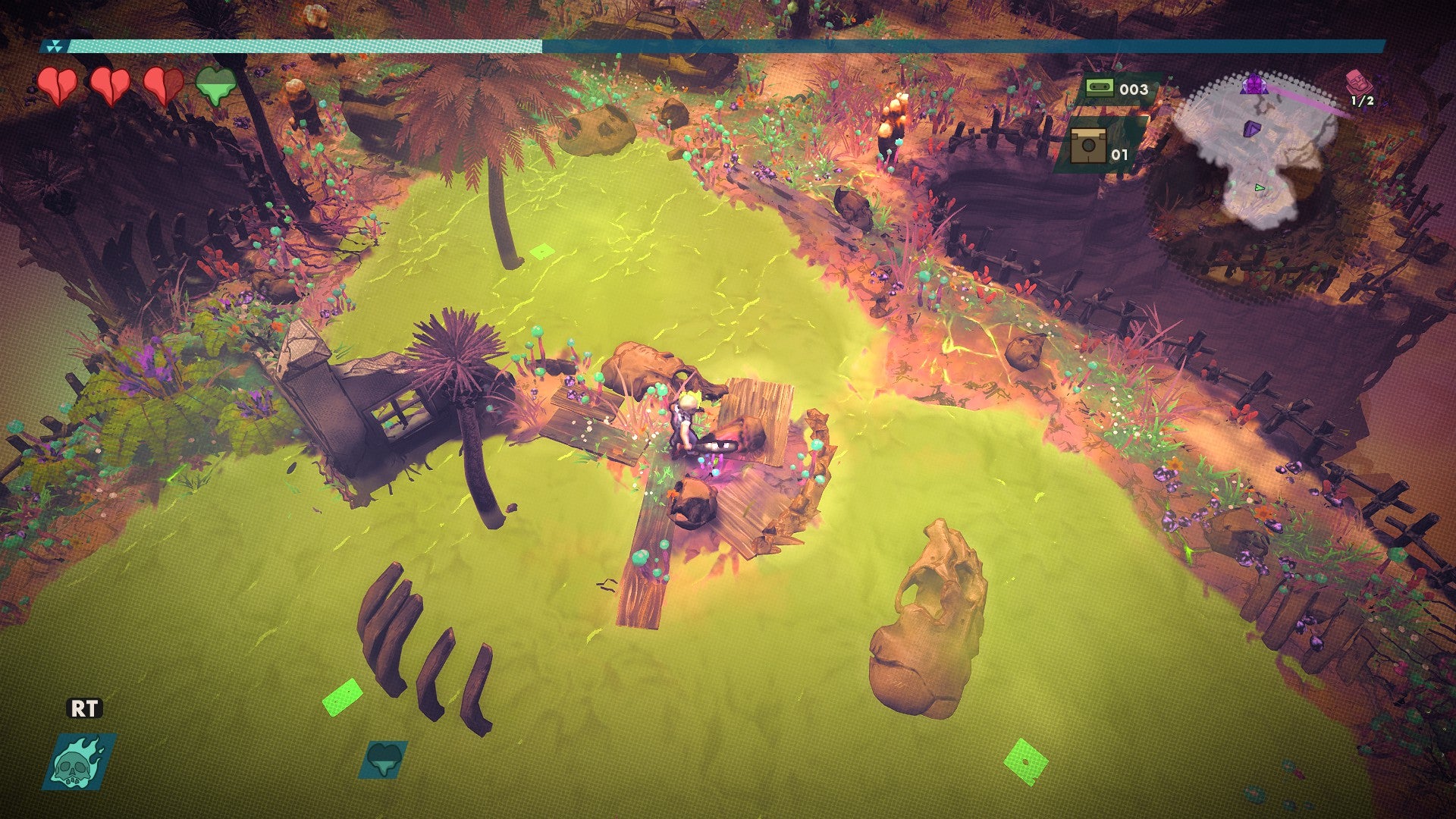 I have a tendency to button mash, which doesn’t work well in Rad, but forcing myself to have more patience and awareness has made combat feel more engaging, if not a little repetitive. Each level ends with a boss fight, which, at least for the two worlds I’ve completed, weren’t too tough once I learned the boss patterns or took care of a few minions.

Most of my progress has been hampered by the RNG nature of roguelikes. I keep not getting enough mutations or not getting useful ones, or not finding the health I need and having to go into a boss fight already weakened. Despite playing for seven or so hours, I haven’t beaten the game or even seen its final stages, due to bad luck, getting swamped in combat, or fighting an enemy in an area that’s too tight or makes it too easy to fall off the level and take damage.

Unlike a roguelike such as Spelunky, where curiosity about each new level drives me on, I’ve wanted to get further in Rad to see what new items or mutations my progress will unlock, rather than wanting to know what its world will deliver. There are mysteries to uncover, though — secret areas to find, and a locked gate in the hub world I’m curious to open — so there’s enough temptation to try again, even when the game’s exploration doesn’t feel engaging. 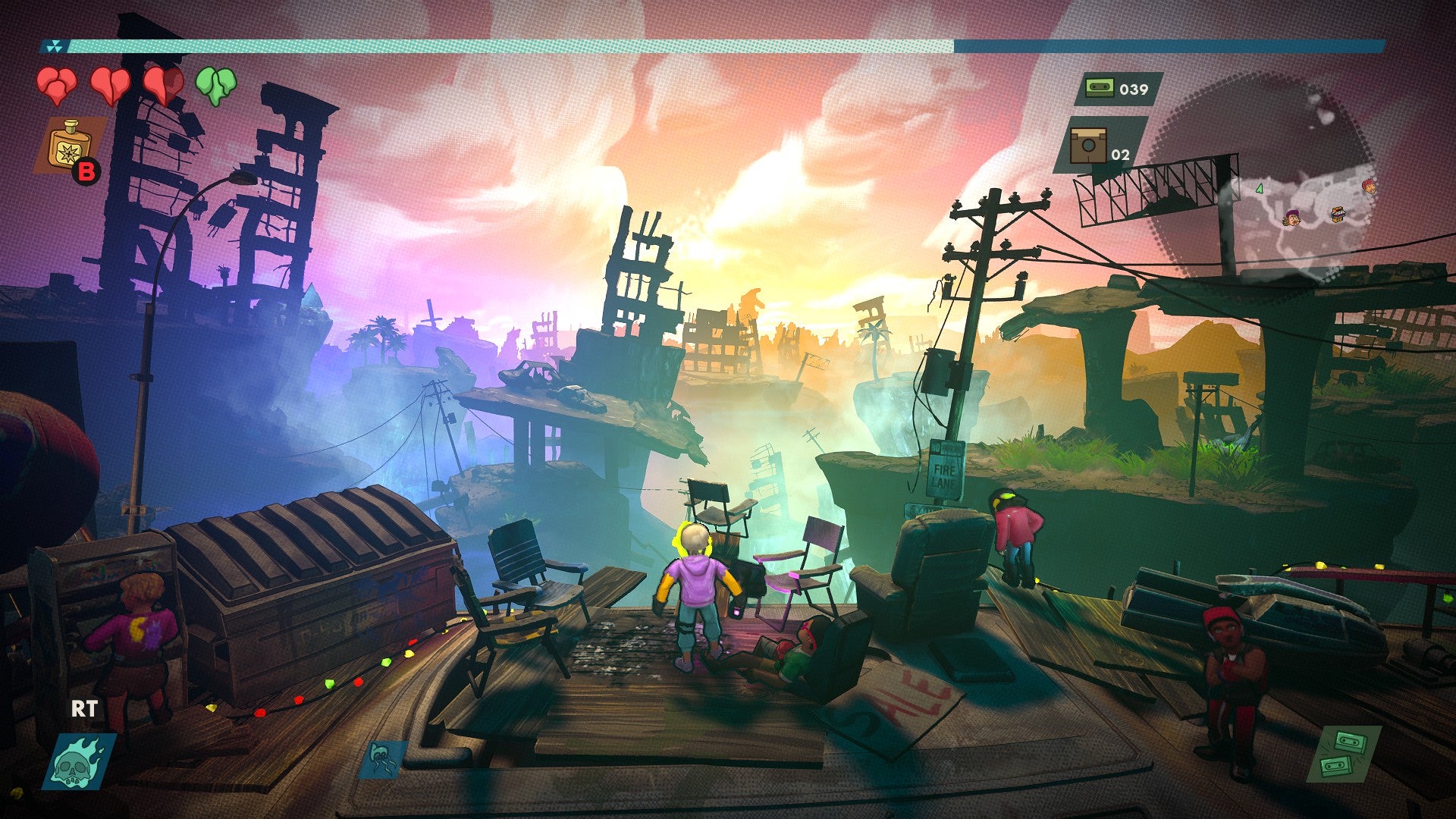 I’m not terribly charmed by Rad’s ‘80s aesthetic of guitar riffs and lingo, though I do love the different inflections with which the game’s narrator says “pause” when you go into the menus. Rad has the “one more try” allure of all roguelikes, the acquisitiveness of finding new powers and the drive to get a little bit further.

I’ll feel tired of the game in a moment of over-exploration, only to start a new run once I die. The ability to save your progress at the hub world makes Rad easy to jump in and out of, a quality that I imagine would be all the more heightened on the Switch (I played it on PC.). Rad doesn’t bring much new to the roguelike genre, but that’s not such a bad thing.

Rad comes out on August 20 for PC and consoles.