When the Dragon Ball Z anime premiered in April of 1989, it was a mere six months behind its Dragon Ball manga source material. For a show that aired every single weekday without fail, this wasn’t much of a gap to fill. It was important to the Dragon Ball Z showrunners that the anime storyline never surpass the manga, for fear of spoiling the ongoing plot for dedicated fans. Thus, those in charge found a way to entertain viewers while their cartoon waited for the its print counterpart to catch up — filler episodes. 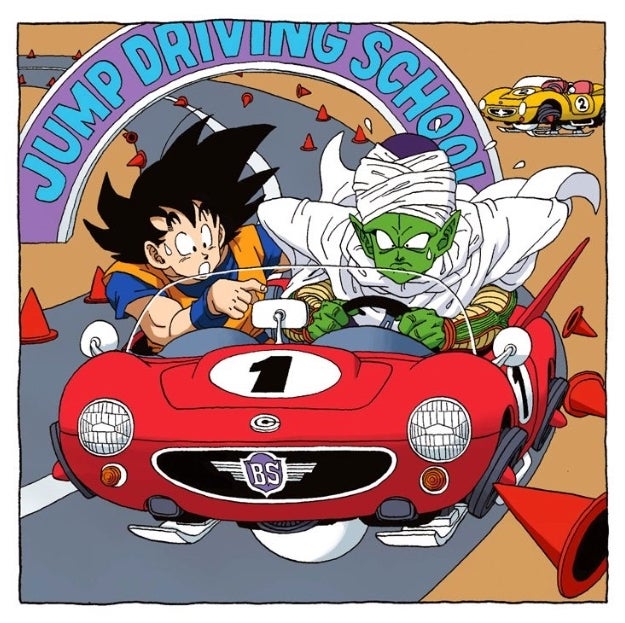 Unsurprisingly, most anime filler episodes don’t add much to the main plot of the show. In the case of Dragon Ball Z, filler episodes usually involved characters training, a conflict with a lesser villain, or simply screaming really loud for an extra hour or two. Most filler was, at best, forgettable. Within Dragon Ball Z’s nearly 300 episode run, around 40 filler episodes were produced, with most falling in between story arcs.

The best filler episode (or possibly the worst) aired on February 5, 1992 in Japan and September 13, 2000 in America. Known as “Goku’s Ordeal,” the episode centres on powerful Z warriors Goku and Piccolo as they attempt to… acquire their driver’s licenses. Though certainly a filler episode, this painfully offbeat adventure is thought to be inspired by the official Dragon Ball art (seen above) featured as the cover for chapters 255-256 of the manga.

“Goku’s Ordeal” stands out from the average Dragon Ball Z fanfare for a few reasons, but the biggest of all is its humour. It feels much more like an episode of the original Dragon Ball, than its much more serious successor. It is quite possibly the dumbest episode of Dragon Ball Z in existence — and I say that as a compliment.

Previously on Dragon Ball Z! Some blue-haired hunk from the future appeared to warn Goku and friends that evil androids were in the works. He informs the group of heroes that they have three years to train before those nasty robots are ready to rumble. This led to the previous episode, “Z Warriors Prepare,” where Goku sparred with Piccolo and Vegeta did many sweaty push-ups while yelling. Pretty standard stuff.

And cut to screaming. 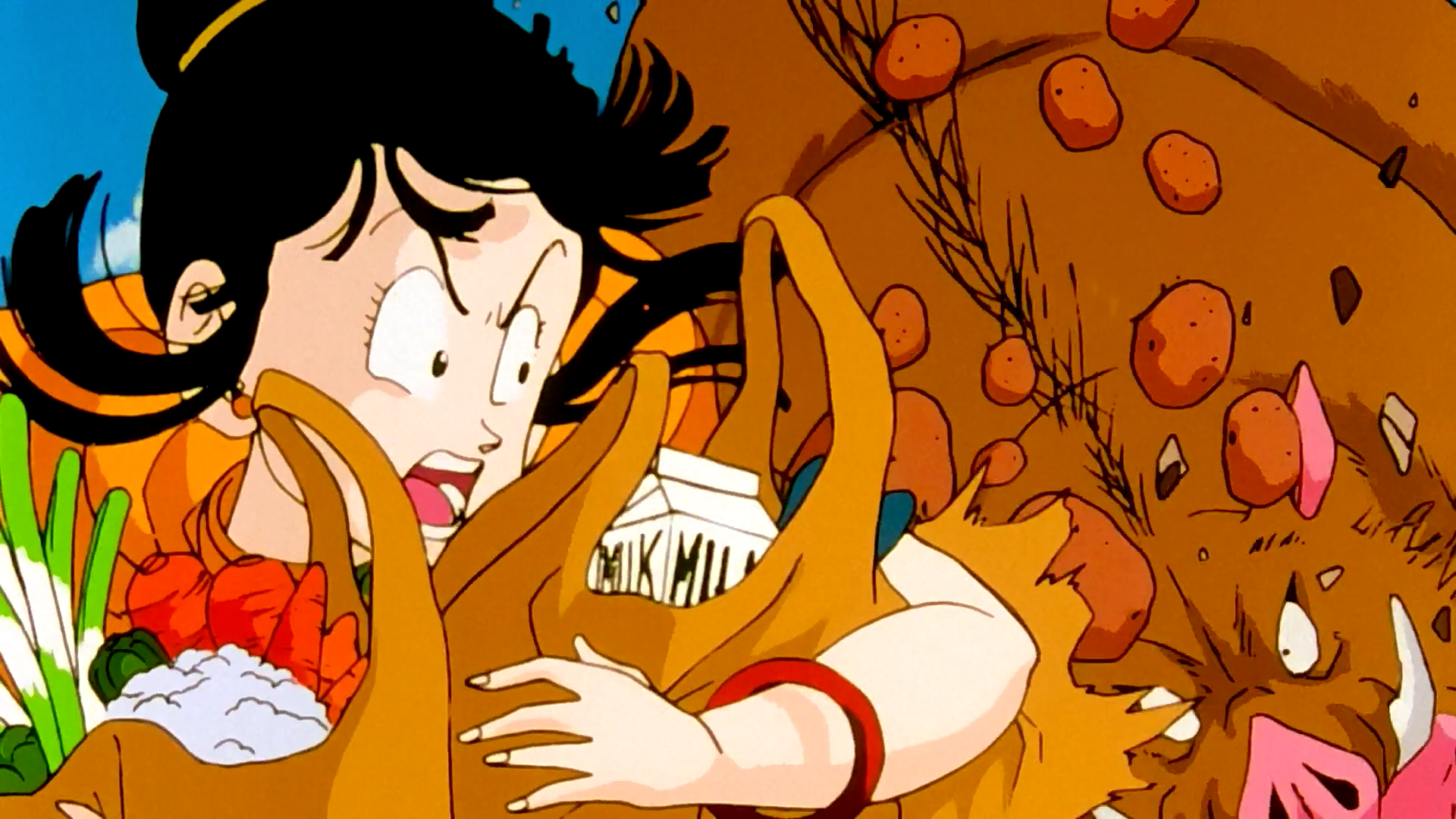 Chi-Chi is sprinting home from the grocery store, followed closely by a giant murderous boar. The carton of eggs in her bag splatters on the boar’s eyes and it runs off a cliff as Chi-Chi narrowly avoids death once more. Oh giant boar, when will you learn?

While his wife fends off Calamity Ganon, Goku is relaxing by the river after a day of training with Gohan and Piccolo. They return home, where Goku, being the moron that he is, dumps all his smelly training gear on the table in front of Chi-Chi, asking her to give them a scrub and letting her know he’ll be in the bath with Gohan.

Piccolo broods outside, like he’s known to do, thinking about how insolent everyone else is. 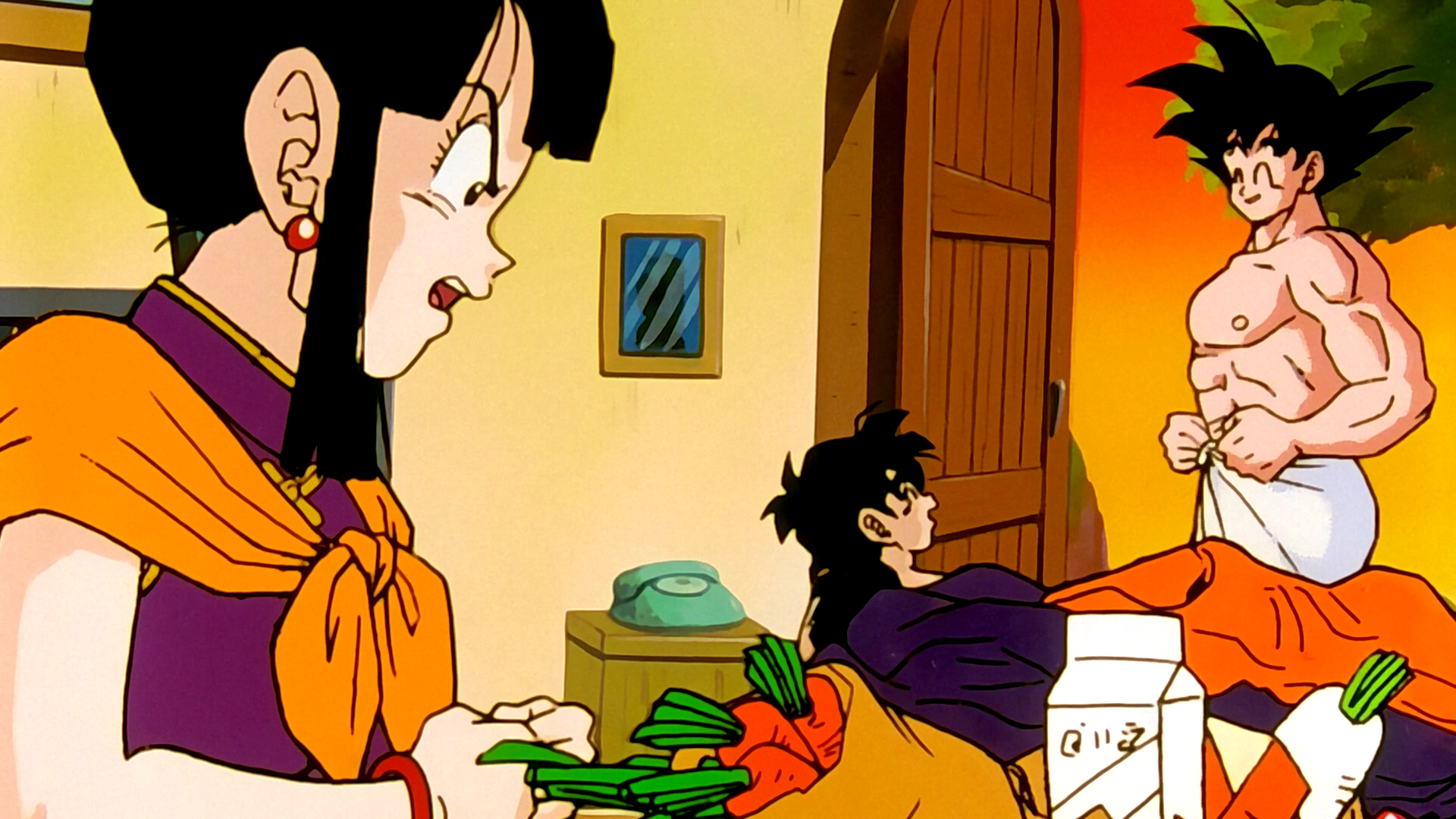 She tells Goku and Piccolo that she had to walk all the way home from the store and she almost died and they both have to get driver’s licenses so they can drive her to the store from now on. Yes, even Piccolo, who has apparently been mooching off Chi-Chi’s hospitality for weeks. Goku and Piccolo are Earth’s mightiest heroes, but they know when they’ve been beat. 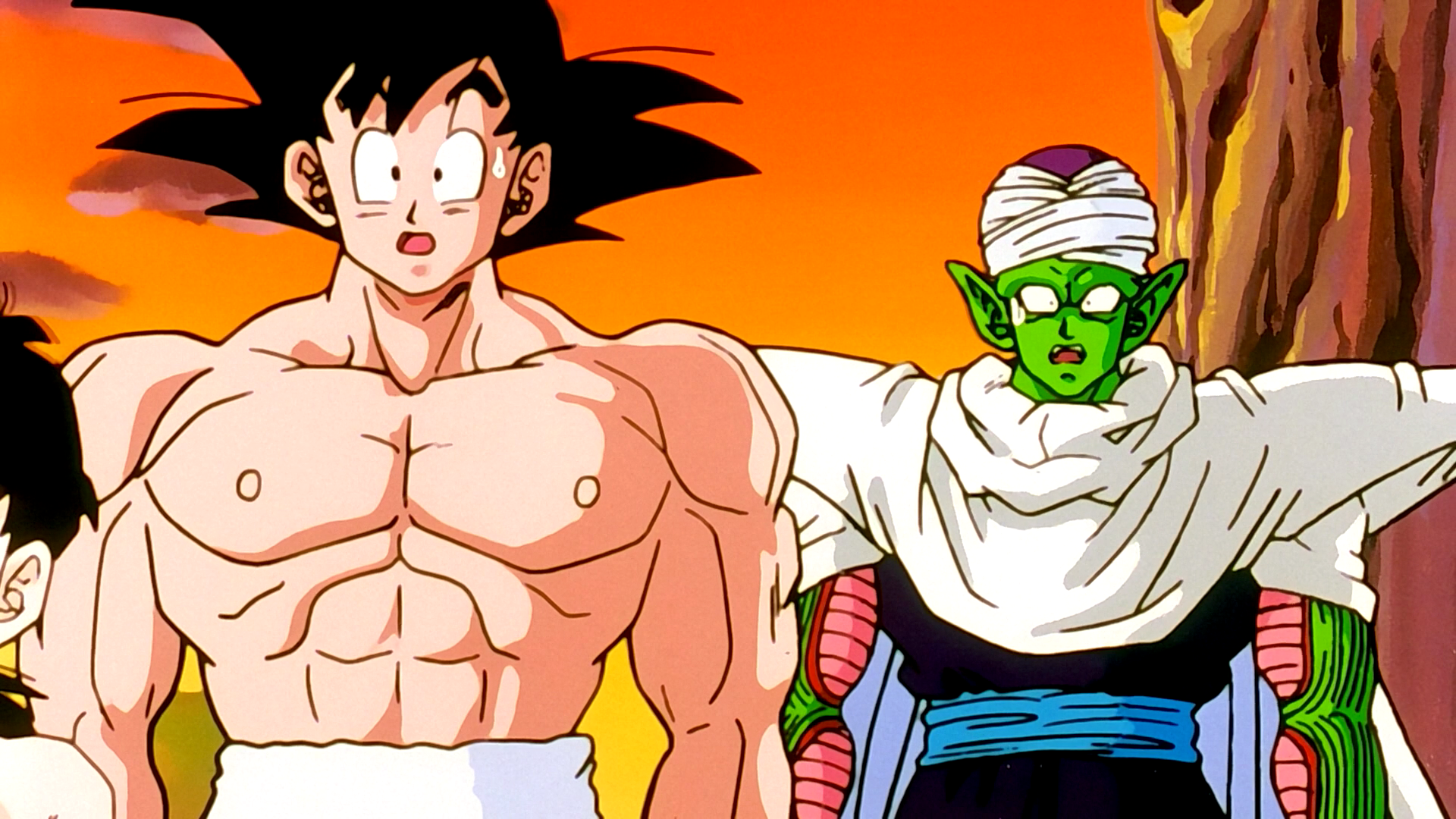 Flash forward to the next day where both Goku and Piccolo wait outside the driving school, clad in some wonderfully awful ‘90s fashion. Piccolo, looking fresh to death, explains to a dumbfounded Goku that these are, in fact, Goku’s clothes that Chi-Chi has simply lent him to appear as a normal Earth boy.

And I’ll give you a moment to scroll back up to that image of Piccolo at the top of this article and bask in the Namekian’s radical style. The tucked-in Postboy shirt, the backwards hat, the bad boy attitude — really take it all in. 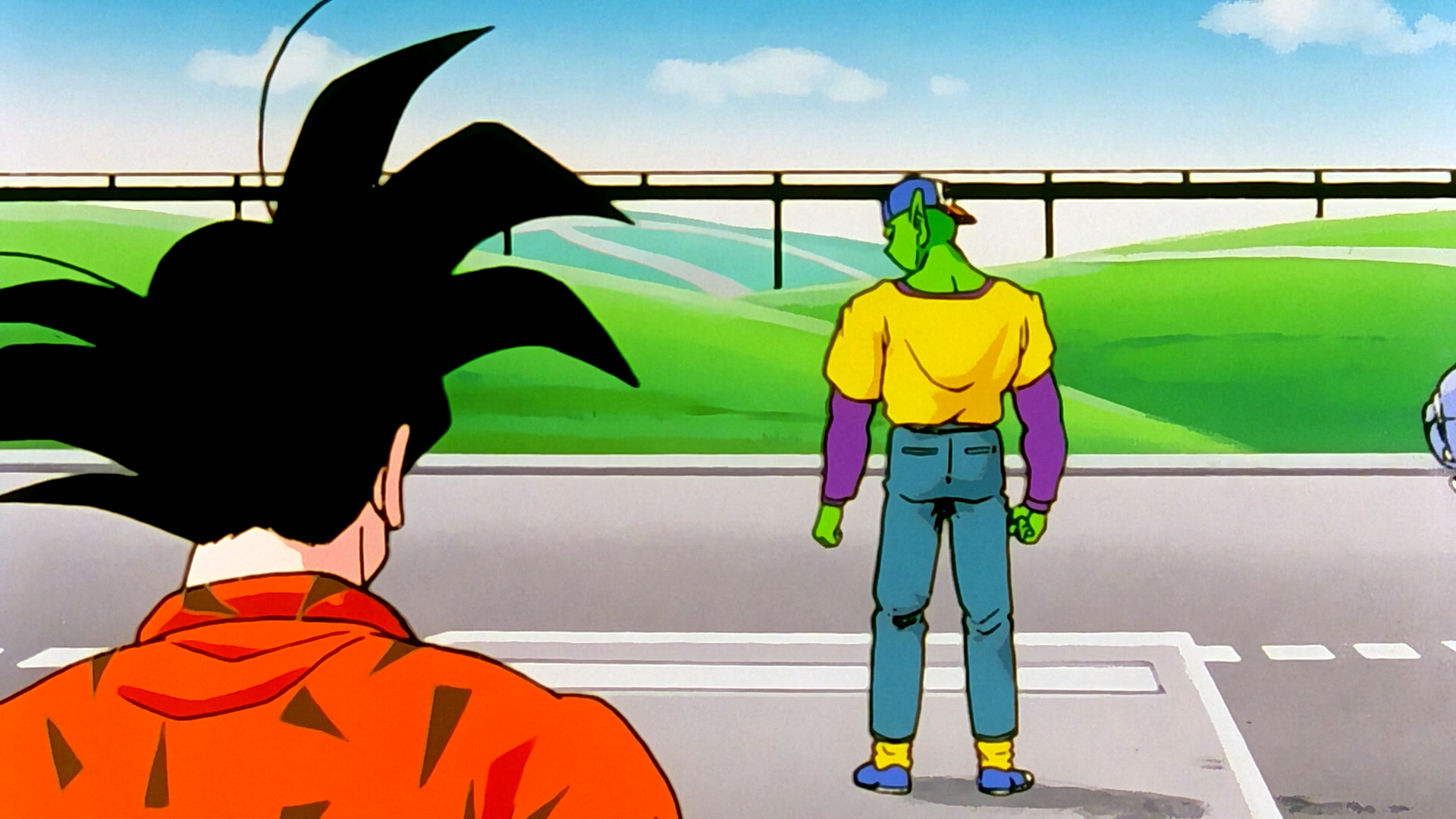 But hey, we’re not here to ogle Piccolo’s firm cheeks in them jeans. Moving on.

Meet the hilarious driving instructors! One is a really old gentleman and the other is a overly peppy young woman. Goku is saddled with the geezer, while ladies man Piccolo slides in next to the cheery brunette. But oh no! As it turns out, Piccolo’s instructor is actually a road raging speed demon, who screams “Burn rubber!” as they zip away. It’s at this time that I’d like to point out Goku and Piccolo are learning to drive hover cars, which do not have wheels, and therefore cannot “burn rubber.”

It’s a glaring oversight that really shatters the realism and continuity Dragon Ball Z is known for. 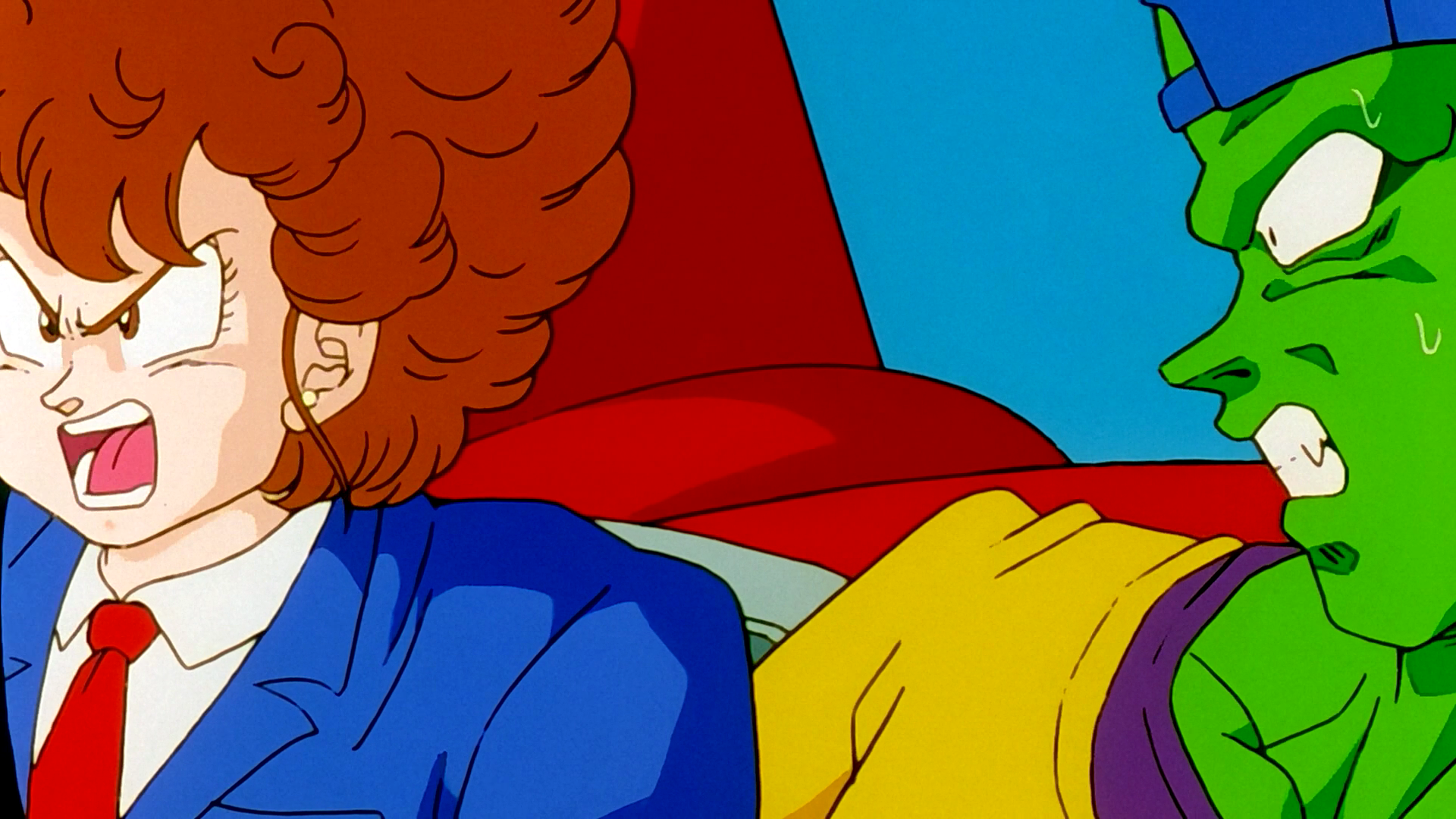 Anyway. Goku’s guy is so old that he can’t open the door to the hover car, and he might just keel over at any moment. Too funny!

Back at Capsule Corp we see Bulma complaining to her parents that all Vegeta does is train in his gravity dome out back. Cut to a beefy Vegeta, clad in booty shorts, doing fast punches. He collapses as the gravity reaches 450 times (!!!) the normal amount, but since his bones haven’t been crushed into a fine powder, he decides to push through the pain. Good for him.

Meanwhile, Gohan (who needs more screen time) is studying under the watchful eye of his doting mother. Instead of learning helpful real-world maths connections, Gohan doodles a comical portrait of his father and Piccolo (who, let’s be honest, is a much better father to him at this point) that looks suspiciously like the official Akira Toriyama art mentioned in the intro. Gohan decides to ruin his future and sneak out with his pet dragon to watch his dads learning to drive. Piccolo, having finally taken control of his hover car from Speedy McGee, is cruising on the highway like the noble, law abiding citizen he is. Meditating for hours on end near waterfalls has given him the concentration he needs to master driving, and he’s sure to get his licence at this point.

Goku, on the other hand, is still being his normal idiot self. He cuts the steering wheel off his car, drives his instructor into a lake, and upon being told that he “stinks,” Goku actually smells himself. Cue Jim Halpert’s trademark stare from The Office. 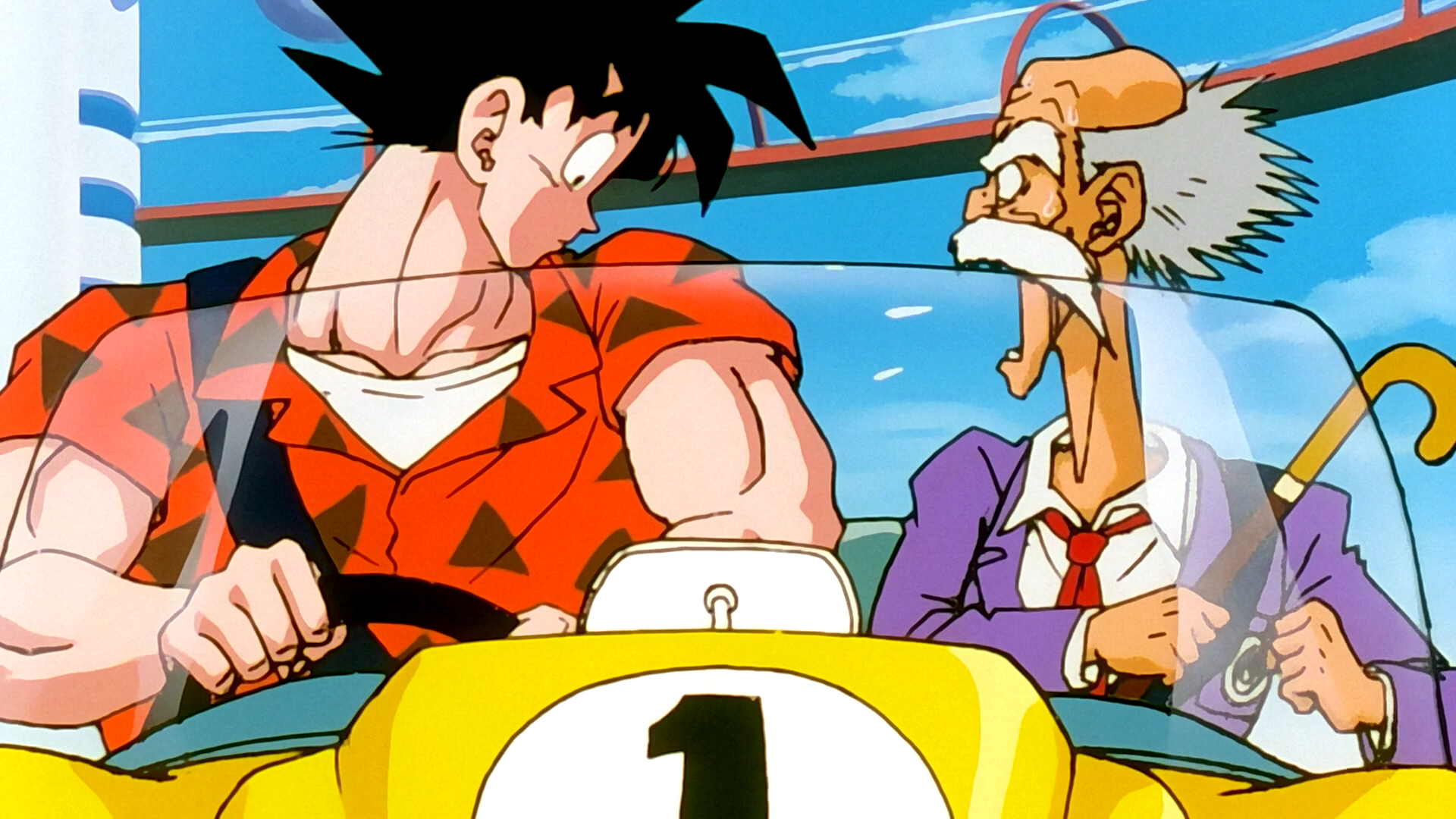 As Goku endangers average citizens with his reckless driving, he passes the calm and confident Piccolo on the highway. Believing Goku’s buffoonery is some sort of challenge, Piccolo is thrown into a fit of rage and attempts to race Goku’s out-of-control hover car. Gohan, who somehow knew exactly where his dads would be, looks on from the sidelines as both hover cars hurdle by at alarming speeds. 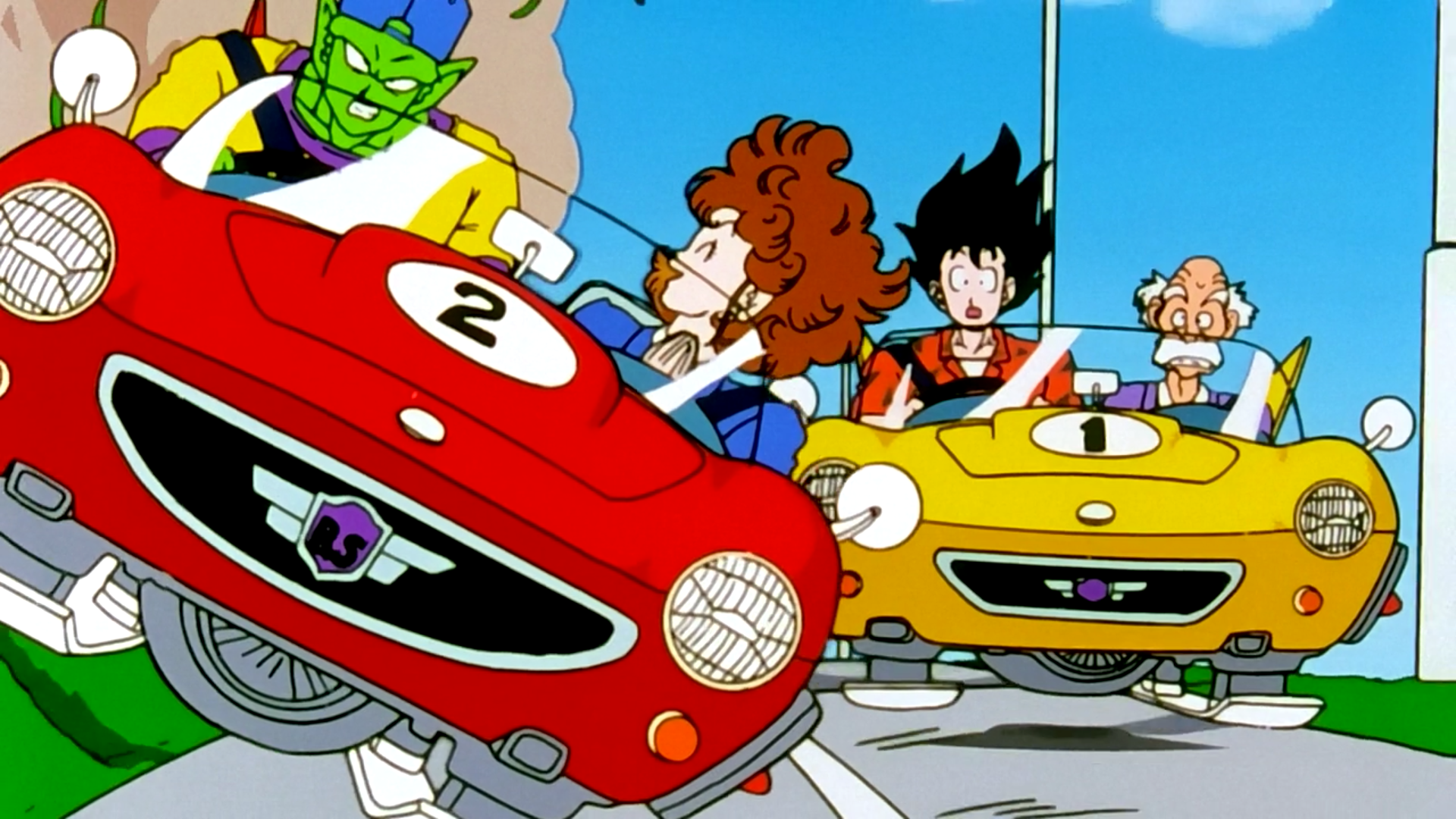 It isn’t long until both hover cars collide in a massive fireball, knocking both instructors unconscious and severely injuring them. Goku and Piccolo are fine of course, because they’re basically gods. Goku quips something like, “Well at least they’re alright,” like he’s a doctor or something.

As it turns out demolishing driving school cars isn’t a deal breaker, as we jump to the next day wherein both Goku and Piccolo attempting once more to satisfy their now-mangled instructors. And this time it’s raining.

Suddenly, a large lightning strike hits the top of a nearby cliff, sending an avalanche of rock and ice falling towards a bus of adorable children. Much like the giant boar at the start of the episode, the child-filled bus is seen careening off the side of a nearby cliff. 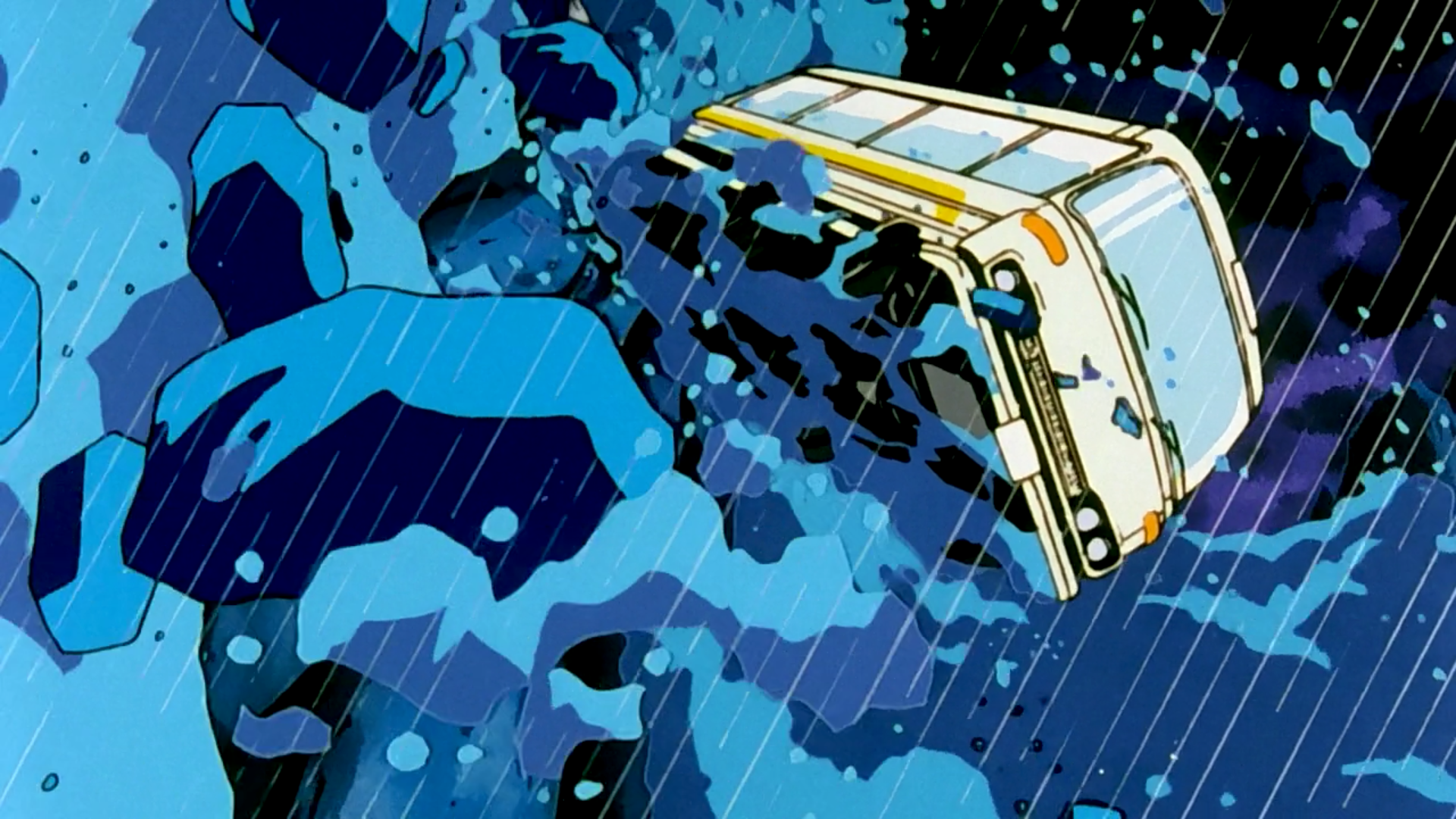 Crashing their hover cars upon seeing the accident, both Goku and Piccolo burst out of their vehicles to catch the falling bus and take on their greatest enemy yet – some big ol’ falling rocks. You would think holding a bus and destroying a few boulders would be a piece of cake for the muscle-bound duo, but Goku and Piccolo sure make it look like a strain. 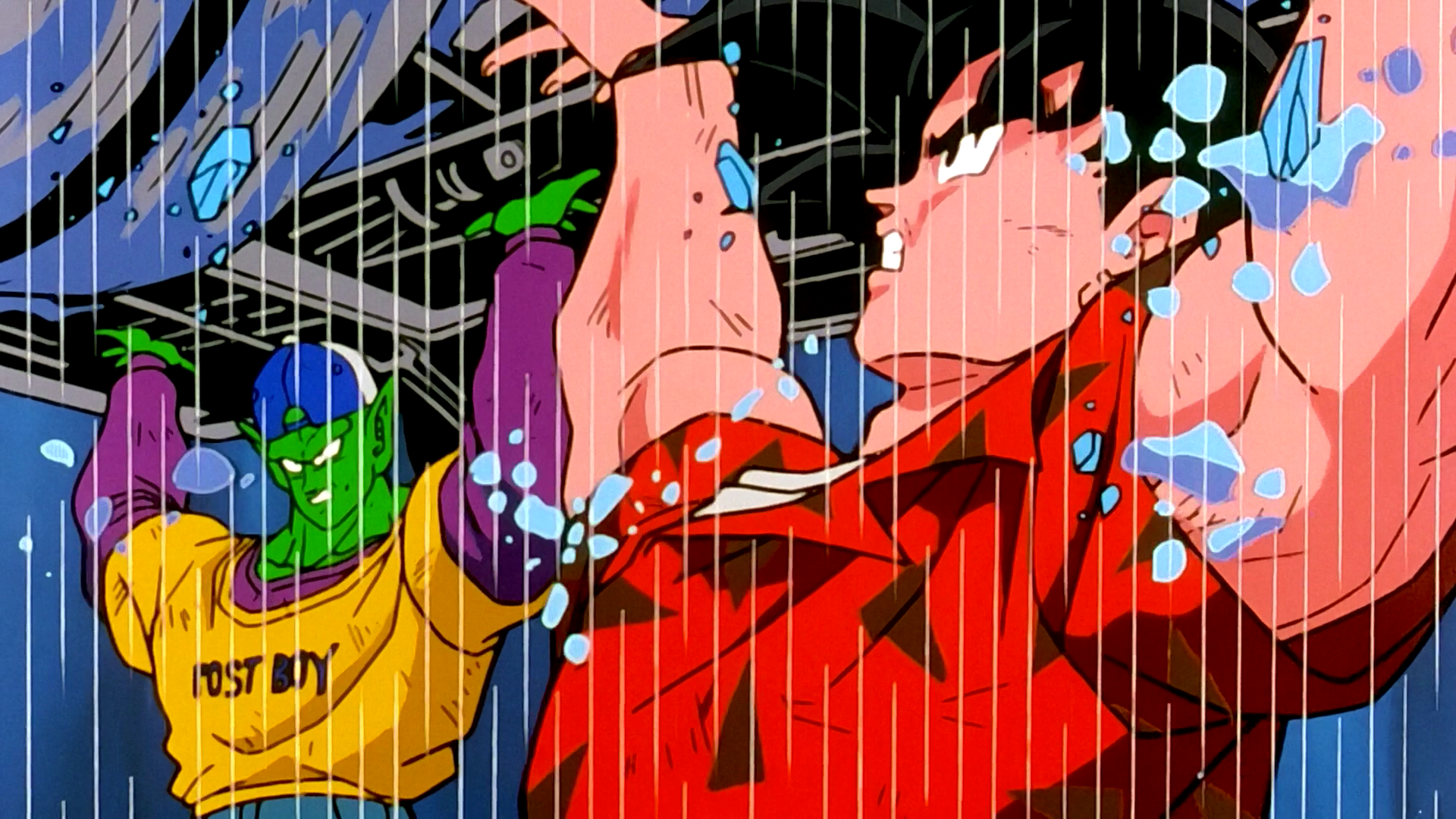 Following their heroic rescue, Goku and Piccolo wave goodbye to the busload of emotionally scarred children. Their instructors are impressed by the freakish display of power they just witnessed, but the sparring partners still destroyed four cars in a matter of hours, so driver’s licenses are off the table.

When this information is relayed to Chi-Chi, she is so overcome by Goku’s unrelenting incompetence that she faints right there on the kitchen floor. Game over. 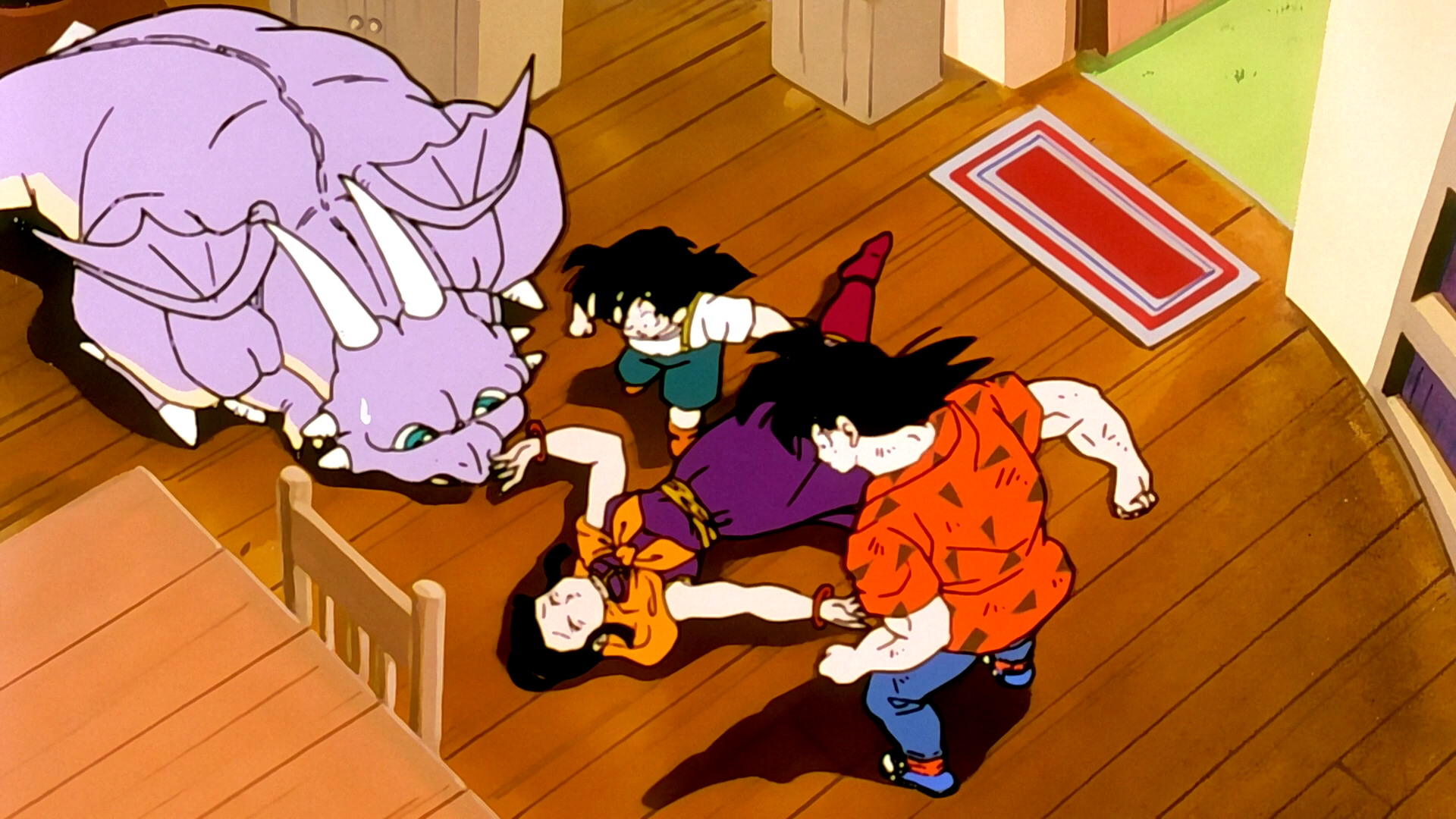 “Goku’s Ordeal” ends with a sudden leap forward to three years in the future. It’s almost android time, folks. A shiny white hover car sits outside Goku’s house, gleaming in the sunlight. Did Goku and Piccolo go back and ace the driving test? Did Chi-Chi get fed up and get a licence herself? How did they even afford a hover car if no one in that family works? I guess we’ll never know.

Goku, Gohan, and Piccolo all head out to save the day, leaving Chi-Chi to the lonely life of an on-again/off-again widow.

Well, wasn’t that fun? You can see why fans, including myself, are very fond of this wacky episode. It’s a delightful and memorable break from the average Dragon Ball Z offering, giving viewers some much-needed laughs along the way. It’s amazing to think it’s been around for over 25 years at this point.

Now, if you’ll excuse me, I need to go work on my Postboy Piccolo cosplay.