It’s A Video Game Streaming Station In A Suitcase 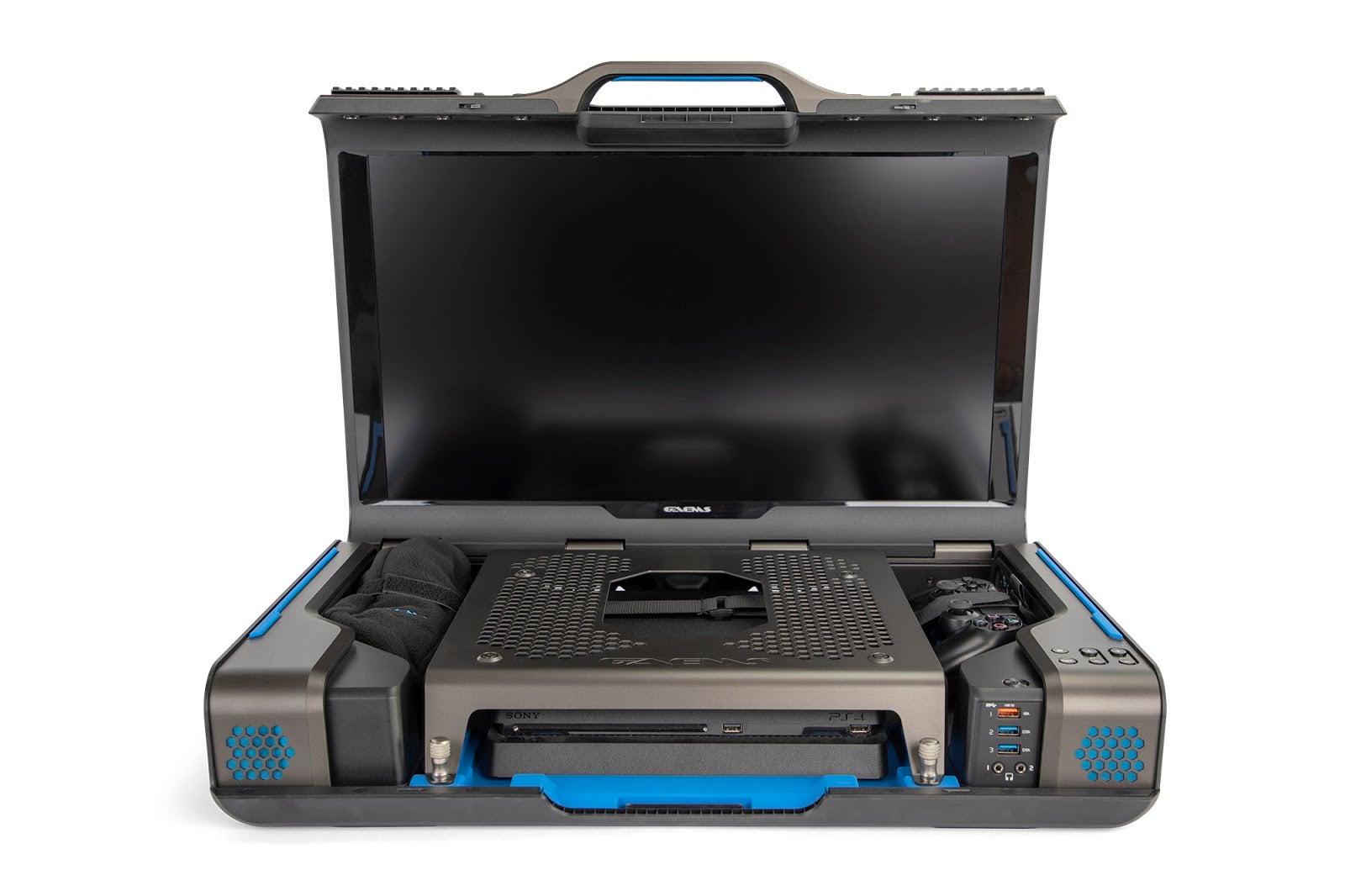 GAEMS makes travel cases with built-in speakers and screens for console gaming on the go. Launched last week, the $US700 ($1,035) Guardian Pro XP is GAEMS’ most advanced cases yet. With a 24-inch 1440p HDR display, chambered speakers with passive subwoofers, and rails for mounting a webcam and lighting, it’s a portable streaming station for the Xbox One, PlayStation 4 and smaller gaming PCs.

During a recent hospital stay I put in some time with the $500 GAEMS Sentinel, one of the company’s more basic cases. It has modest built-in speakers and a nice enough 17-inch 1080p display.

The Guardian Pro XP makes the Sentinel look like Fisher Price’s My First Gaming Suitcase. Its screen is larger and crisper, with a 2560×1440 resolution and support for high dynamic range. Instead of a pair of flat speakers resting flush with the display, the Guardian Pro XP has dual-chambered speakers with passive subwoofers, powered by a 12-watt amp. 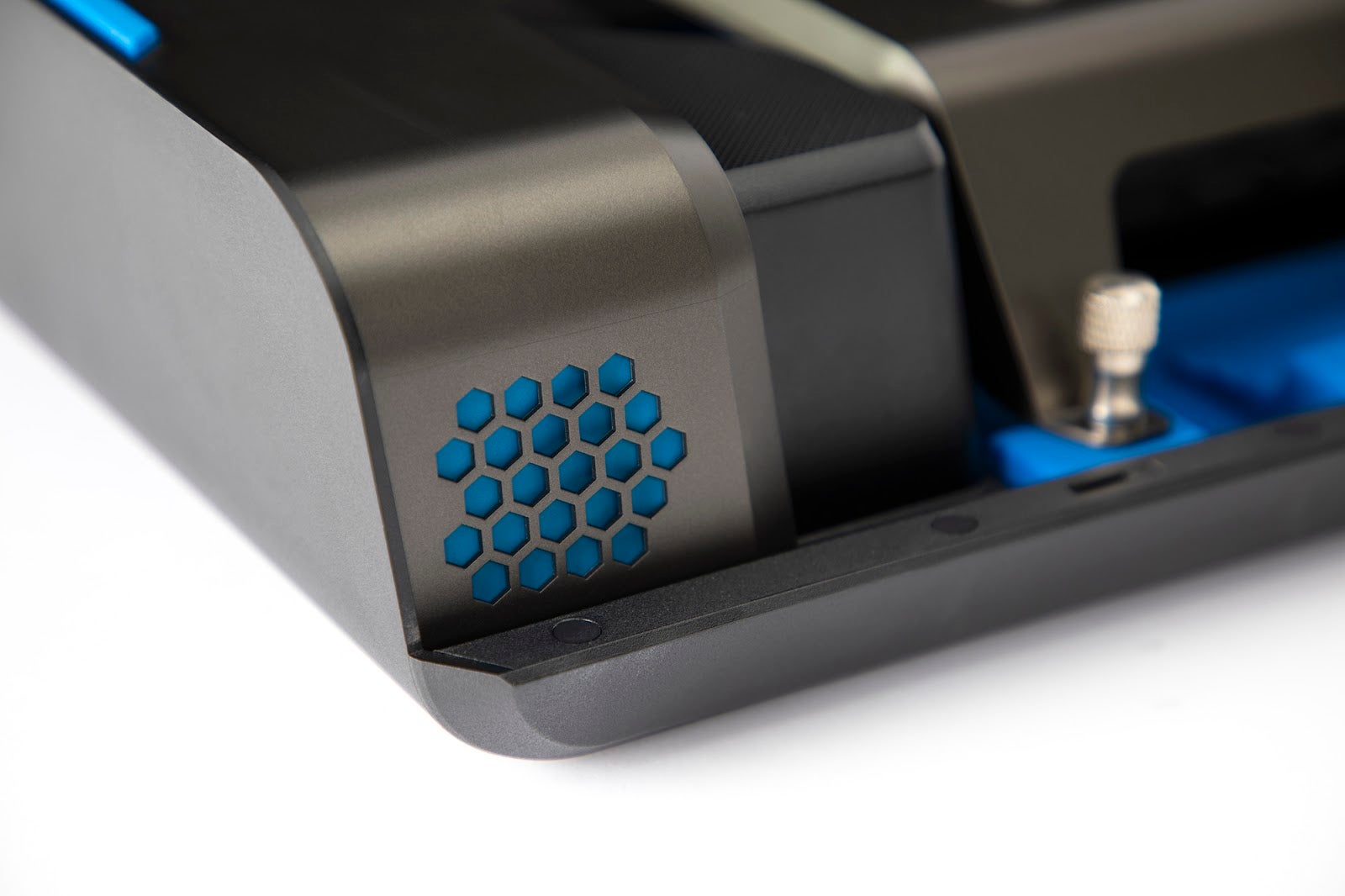 Where the Sentinel had my PlayStation 4 or Xbox One sitting on the lower half of the unit secured with straps, the Guardian Pro XP holds its console companions within a cage secured by a pair of thumbscrews. It looks more like home for a console instead of a place to sit a console. 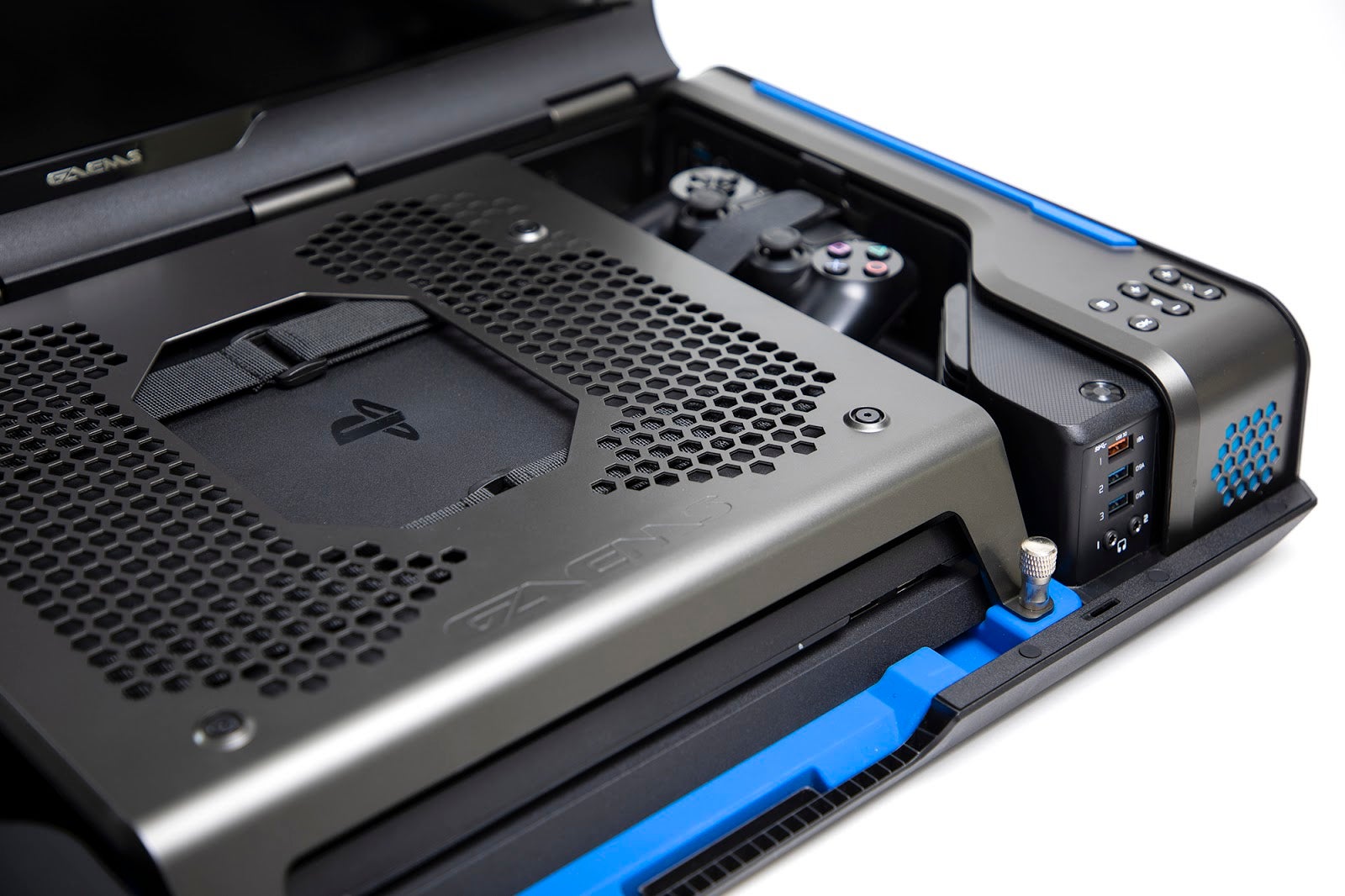 It’s got places to hold controllers. More importantly, it has places to charge controllers, in the form of a USB media hub. Running through the connected console’s USB, the media hub features three ports including a passive charging port for when the console is powered down. 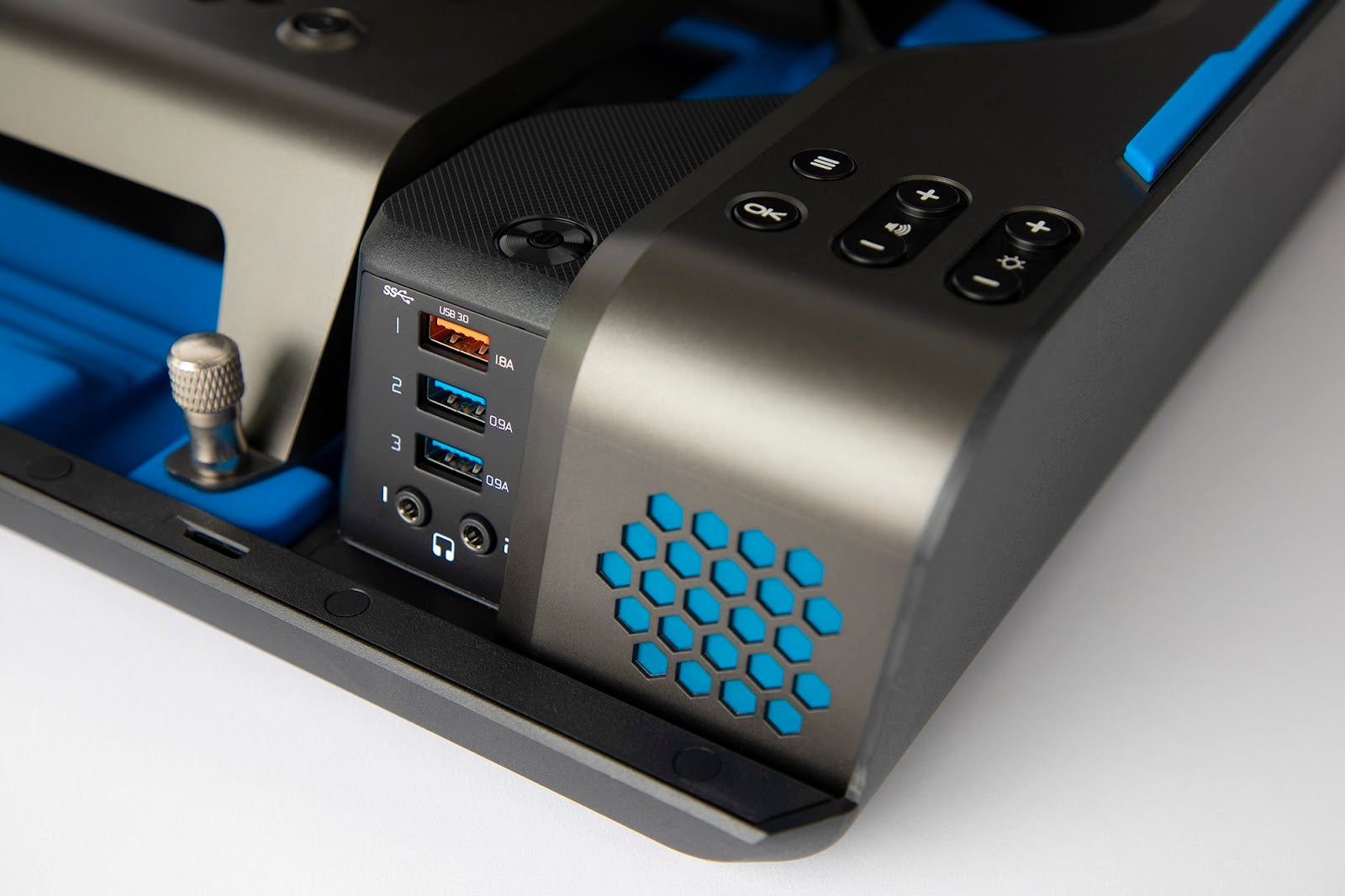 The USB ports also come in handy with the Guardian Pro XP’s streamer-friendly camera and lighting mounting system. Rails on either side of the unit’s handle accept standard mounting brackets. Any device with a threaded hole for a camera mount can easily be connected to the top of the unit and plugged into the USB port for power. Hook up a nice camera light, a webcam, and a good USB microphone, and that’s everything one needs to stream in one handy box. 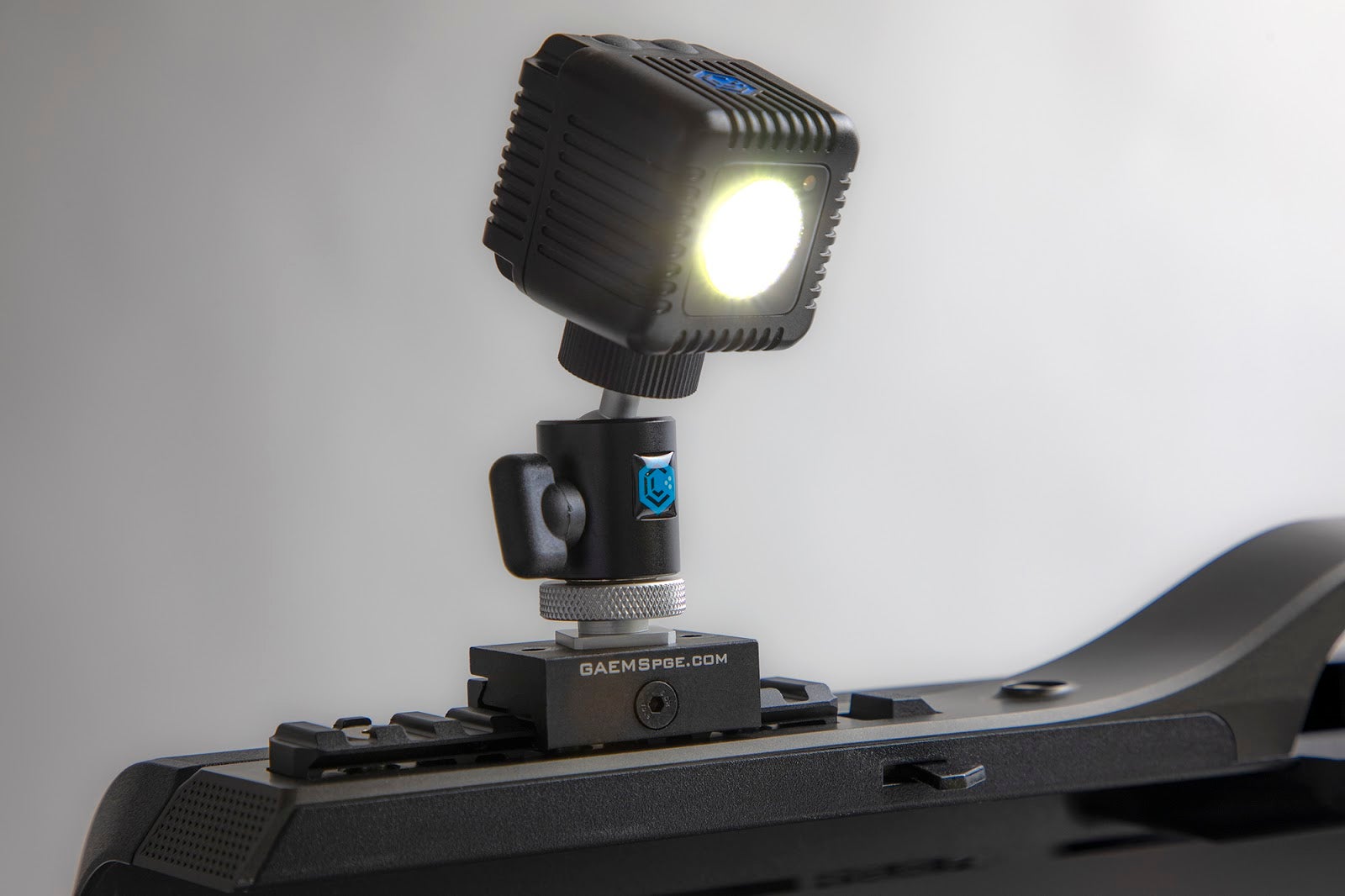 The GAEMS Guardian Pro XP’s robust screen, speakers, and added functionality come at a cost… It’s a hefty 24 inches wide, 17 inches tall, and 5 inches deep. On top of that, it weighs 16kg without a console or PC inside. It’s a big boy, this case, not the sort of thing you’re likely to tote about town.

I’ve only fiddled with it briefly so far, with plans to do an in-depth review in the near future, but it’s a damn impressive piece of gaming hardware. It’s hard to imagine me being in a situation where I’d have to quickly set up a remote gaming stream. But if I were, the Guardian Pro XP would get the job done.