When I first saw people on Twitter praising Wilmot’s Warehouse, a new puzzle game for computers and Switch, I didn’t get it. It looked like a game about moving blocks around, and I figured it was just about grabbing things from one place and bringing them to another. After spending some time with it, I’ve learned what makes it so unique and compelling. Wilmot’s Warehouse isn’t about overcoming problems a designer has set for you, but solving the problem of your own brain.

In Wilmot’s Warehouse, you play as a block who works in a warehouse. At the start of a turn, a pallet of objects gets delivered to the bottom of the screen, and you have about three minutes to sort them against pillars.

These objects are sometimes recognisable: toothbrushes, food, reading glasses. Others are brightly coloured shapes or are vaguely reminiscent of buildings or pills. Once the sorting timer is up, four customers appear at the top of the screen, demanding objects that you have a minute and a half to bring to them.

You can just drag all the objects close to the delivery zone if you want, but things are more manageable if you organise them against the pillars into categories. You can organise items however you want, but more items get added between turns. Whatever categories you come up with quickly start to expand.

Some items could go in multiple categories, while others introduce new categories altogether. You have to make snap decisions to sort objects, and then remember both what you called them and where you put them.

Things started off fine for me this afternoon. I dubbed a category “mouth stuff” and filled it with toothbrushes, pills, and teeth. I had another category I called “day at the beach” that had fishhooks and what I decided were shark fins, near another pillar titled “weird blue shapes.”

“Weird blue shapes” initially included what looked kind of like a yellow bird beak on a blue background, which I put there because I was in a hurry and because it was blue. But as the items in “day at the beach” grew more diverse, I decided the beaks were better off there, representing seagulls. 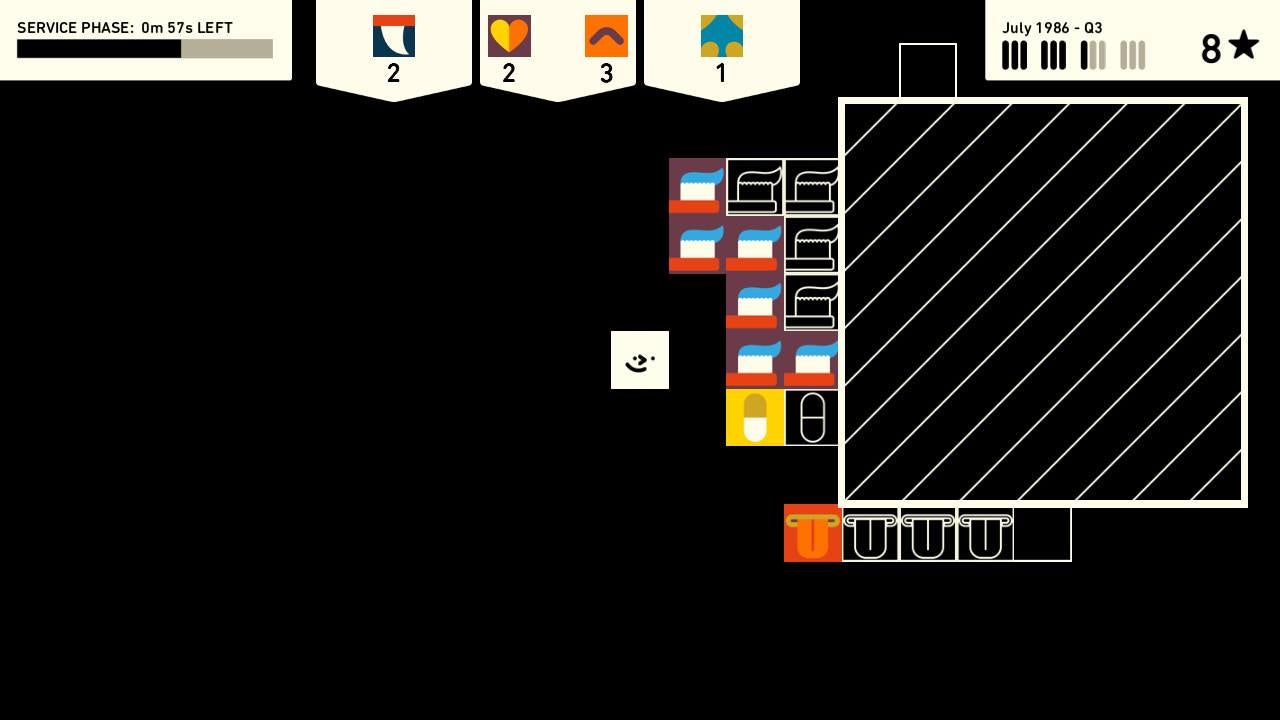 Items appear in black and white when you’re too far from them, making the memory aspect of the game even more challenging

When some cherries and lemons appeared, I put them on the other side of the beach pillar because I thought they resembled slot machine icons, turning “day at the beach” into “day at Atlantic City.”

As I started to unlock beehives and watermelons, I wondered if I should make a new category for food, or move all the foodstuff to “mouth stuff” because food goes in your mouth. Weird shapes that weren’t blue showed up, expanding “weird blue shapes” into “weird shapes.” But then was that new item a weird shape or a pill? What kinds of things had I decided were weird shapes anyway? Where exactly had I put that one shape a customer was demanding?

Every few turns you get a free period to reorganise your items. While this could make Wilmot’s Warehouse easier, giving you a chance to clean up your mess, deciding to overhaul your categories can make things worse. Not only do you have to remember what items you organised off-screen to deal with your growing inventory, but sometimes you have to completely rethink how you perceived an object or what you renamed a category.

Reorganising things means fighting against your own habits and the memory of your past decisions. I’d forget that I’d turned “weird shapes” into a couple of discrete categories and careen around my screen in a panic when a customer demanded an object I could vaguely remember putting someplace. I considered drawing a map to keep by my side as I played, but the game feels more hectic and fun without one. 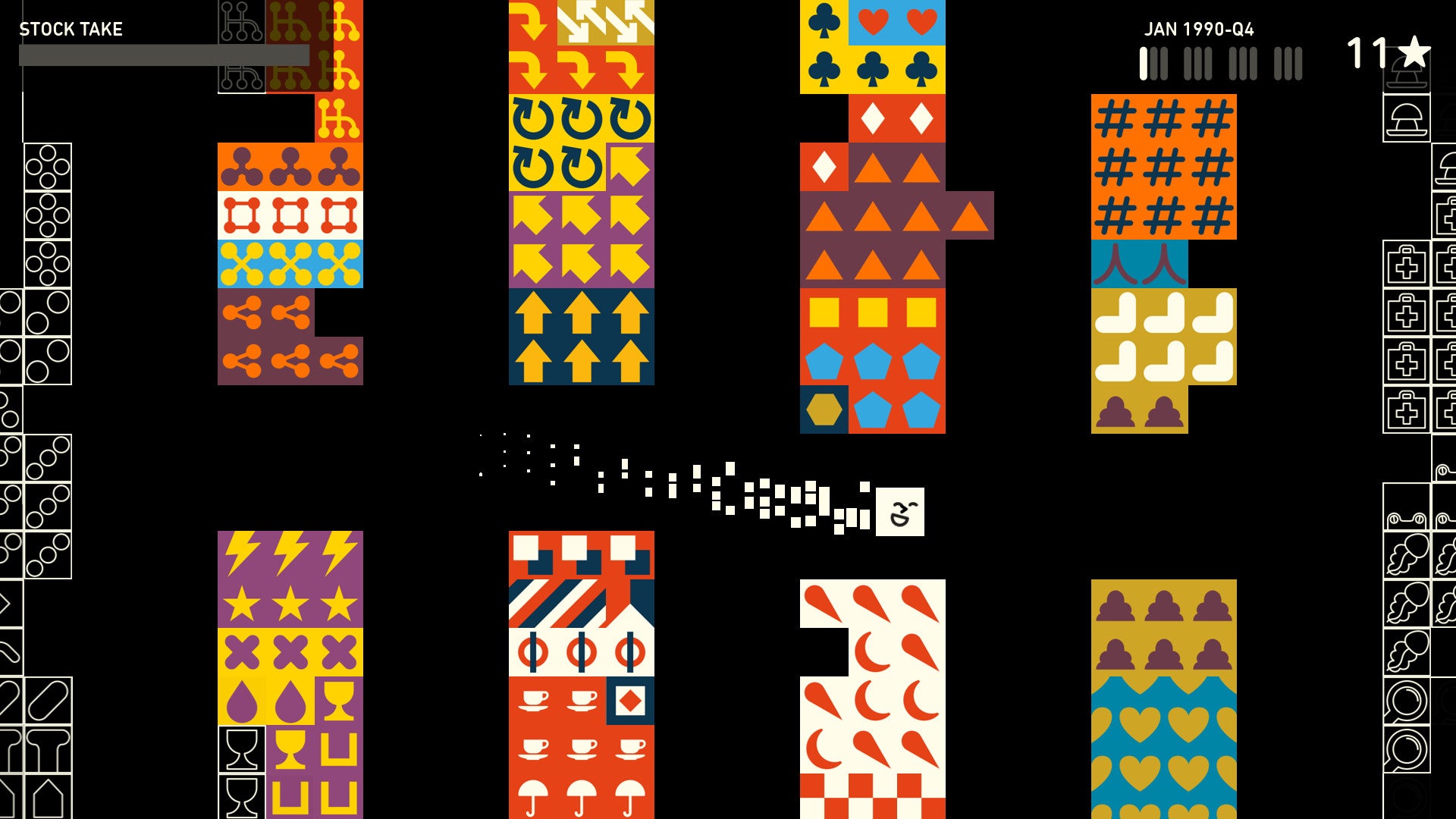 Completing deliveries under time earns you stars, which you can spend on upgrades. I’ve upgraded Wilmot to be able to drag more blocks at a time, and to flip the positions of blocks for easier movement and organising.

He has a short dash he can perform when he’s not carrying objects, and I’m looking forward to the upgrade that lets me demolish pillars to make more space. My upgrades have helped me make deliveries faster, but the core of the game remains as challenging and delightful as when I first booted it up.

As I’ve played, I’ve been screaming nonsense like “Oh no, watermelons!” and “Stop hiding, library!” Wilmot’s lack of constraints makes the game’s challenge personal — the real puzzle is you.