A Halloween Journey To Heck Is Just What Borderlands 3 Needed

Today saw the start of Bloody Harvest, the first big event for Borderlands 3. After a month of hit-or-miss weekly events, this Halloween-themed update is a fantastic reason to get back into the game, with numerous challenges to keep players busy and, of course, mountains of loot to scavenge.

Bloody Harvest opens for Borderlands 3 players as soon as they are able to access Sanctuary III, the spaceship that acts as a main hub for most of the game. A brand new NPC, the talking dinosaur Maurice, tasks the Vault Hunters with tracking down ghostly goop from enemies across the galaxy. Possessed bandits and monsters glow with an unearthly light, and once they are killed, the ghost controlling them pops out and must also be defeated. After gathering up enough ectoplasm and returning to Maurice, a portal is opened to Heck, where the real meat of the event takes place.

Heck is a gorgeous, spooky new area in Borderlands 3. Although it’s not very big, and seems to have been at least partially built using assets that already exist elsewhere in the game, Heck has been nicely spruced up with a sheen of otherworldly malice that makes it feel unique. Pumpkins, spiderwebs, and blood all contribute to the event’s aesthetic, and these new trappings make for the perfect opportunity to play around with the new photo mode, which was also added to consoles in this update. 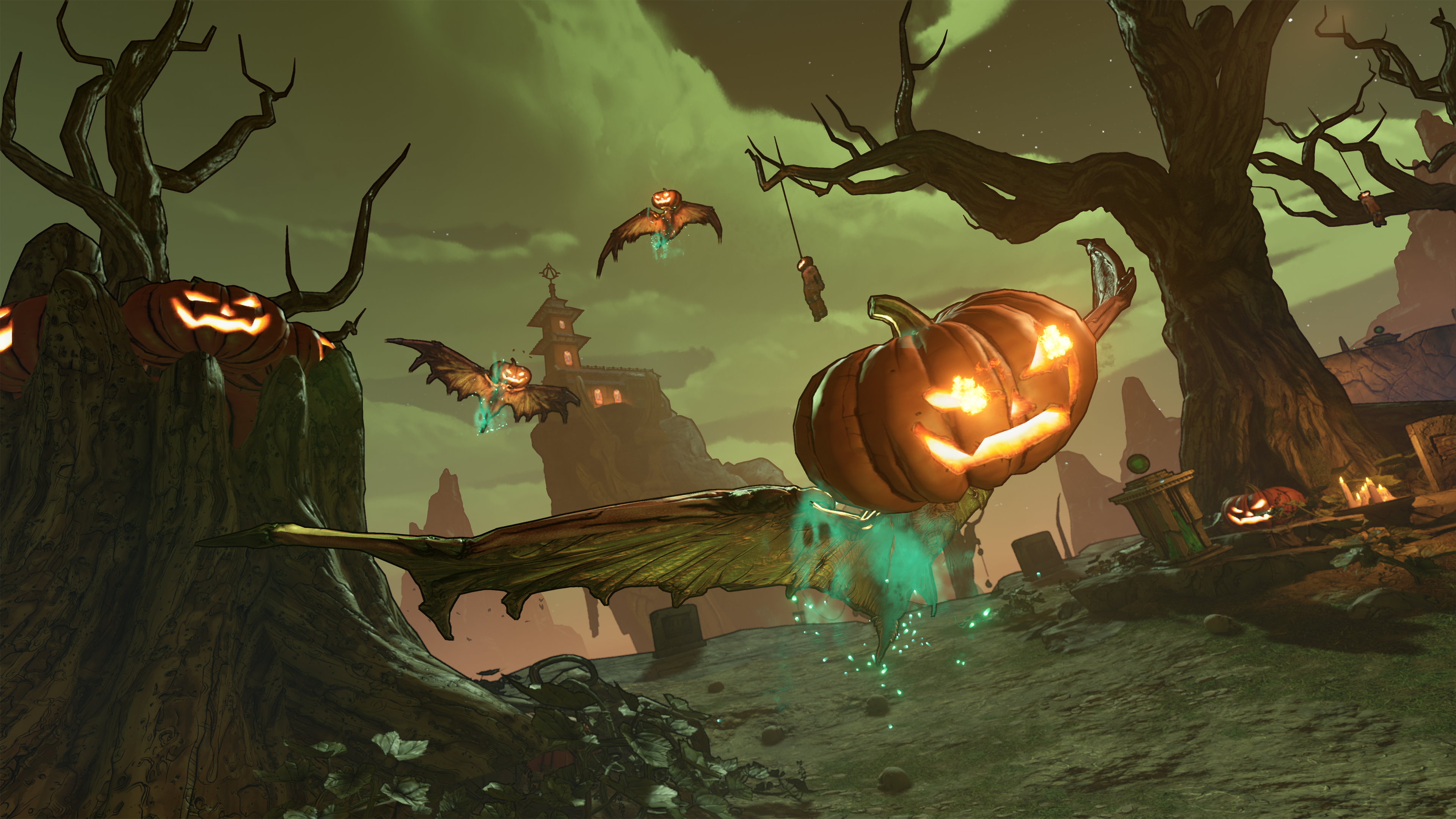 While traipsing through Heck in search of Bloody Harvest’s boss, Captain Haunt, players will need to contend with Terror, a new status effect that makes aiming difficult and obscures their line of sight while it’s active. Defeating a possessed enemy and forgetting about the ghost is a surefire way to be terrified, so it behooves aspiring ghostbusters to pay attention, especially when it comes to the new loot ghosts—which, as the name indicates, rain down rare weapons upon exorcism. Fortunately, many of the new guns introduced in Bloody Harvest come with modifiers that take advantage of high Terror levels to increase gun damage, regenerate ammo, and produce explosions on reload, just to name a few.

Bloody Harvest’s main gameplay loop revolves around making multiple jaunts into Heck. Once the area boss is dealt with, Maurice asks the player to bring him more slimy ghost souls, after which a new trip to Heck can be started. Nothing much changes in the area between excursions—the biggest difference I noticed was the inclusion of flying, pumpkin-headed rakks on subsequent visits—but it does offer more chances at Bloody Harvest-exclusive loot like the Fearmonger shotgun. Invading Heck is also the only way to complete a variety of new challenges, which reward cosmetic items as they are completed. These challenges range from solving simple puzzles to defeating large quantities of ghosts, and should keep even hardcore Borderlands 3 players busy until the event ends on December 5.

Borderlands 3 launched with its fair share of problems, like poor performance even during simple things like opening menus and banks that deleted players’ hard-earned loot. Deep down, though, it remains an entertaining experience for fans of the looter shooter formula. The last few mini-events had me worried since they provided little reason to spend more time with the game after completion. But Bloody Harvest, with its compelling atmosphere and content, is the perfect excuse I needed to hop back in with my level-capped Gunner and smash some ghosts. If this is what we can expect from future updates of this size, I can’t wait to see what else Gearbox has in store.