Wattam Is Complete Nonsense And I Love It

At the beginning of Wattam, the latest PC and PlayStation 4 game from Katamari Damacy creator Keita Takahashi, I control a green cube with a face and a bowler cap, sad and alone in a dark world. Then I make friends with a small rock. Then a large rock. I tip my hat to my new friends and a confetti bomb rolls from beneath the hat and explodes. Then the sun comes out.

With the sky now bright and blue, the spotlight that previously illuminated Mayor Cube and friends bids them a teary farewell, no longer needed. Those tears sprout a flower. Another explosion creates two sprouts, which blossom into flowers themselves. A final explosion sends all the new friends into the air. The scent of fresh flowers attracts a nose. A nose with a face. Everything here has a face. 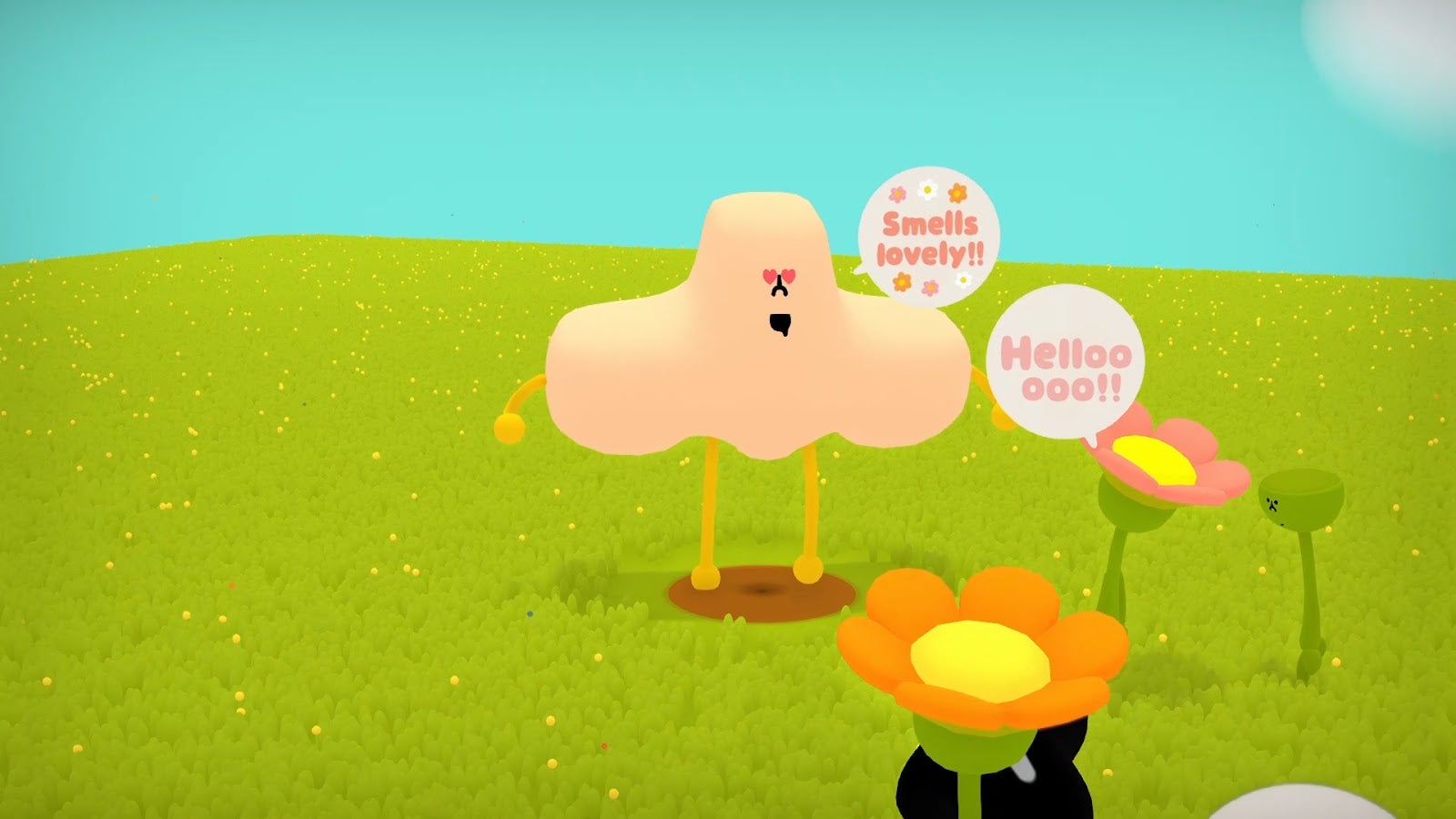 Detecting a scent, the nose wanders over to a corner of the grassy platform and sniffs it. An acorn pops from the ground. The acorn runs to the centre of the platform and plants itself. The flowers, along with the smaller of the rocks, join hands in a circle and dance around the planted seed, causing a tree to sprout. The tree eats Mayor Cube and then shoots him out in a new form. Now he’s Mayor Apple. The tree eats flowers and rocks, spitting them out as fruit as well. 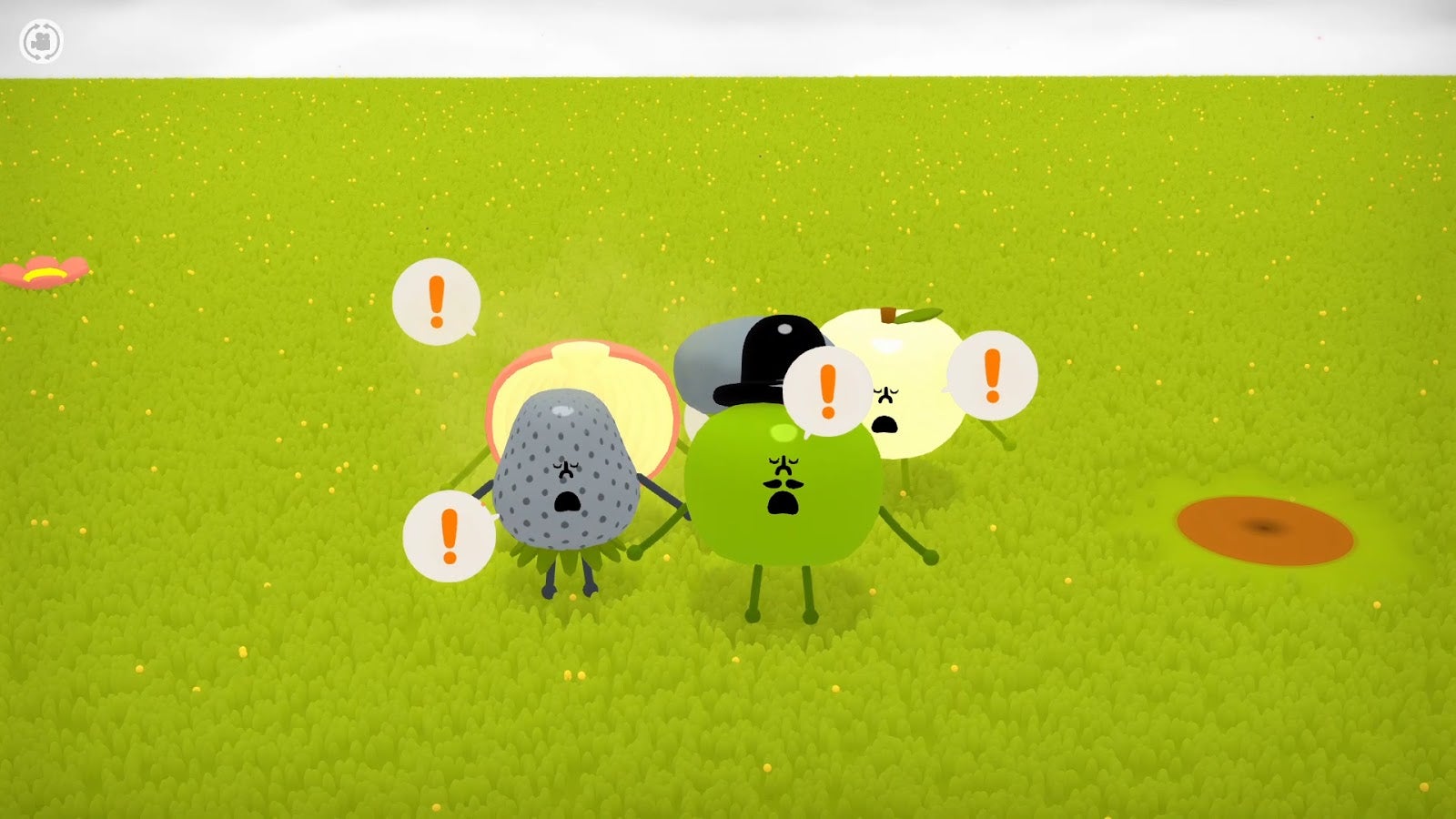 The fruity ruckus summons an entirely new platform, the table, along with four new friends: a fork, a spoon, a bottle of milk, and a very hungry mouth. The mouth wants fruit. The mayor is fruit. Soon the mayor is digested fruit, still wearing his signature hat. All of this happens in the first 15 to 20 minutes of Wattam, a whimsical game about restoring a lost world, one object at a time. It’s difficult to explain what exactly is going on in the game without walking someone through it step-by-step. It’s a constantly expanding puzzle, each step spawning new friends, new lands, new seasons.

Each new item is a new character for the player to control. These silly, sentient items each bring their own unique abilities and challenges to the world of Wattam. A telephone loses its receiver in the sun and begins to cry, and the player must try to stack up characters to try and reach the thieving celestial orb. A piece of sushi loses its fish eggs, which it calls its children, turning the mayor into a hard-boiled detective, questioning other bits of sushi as to the roe’s whereabouts. 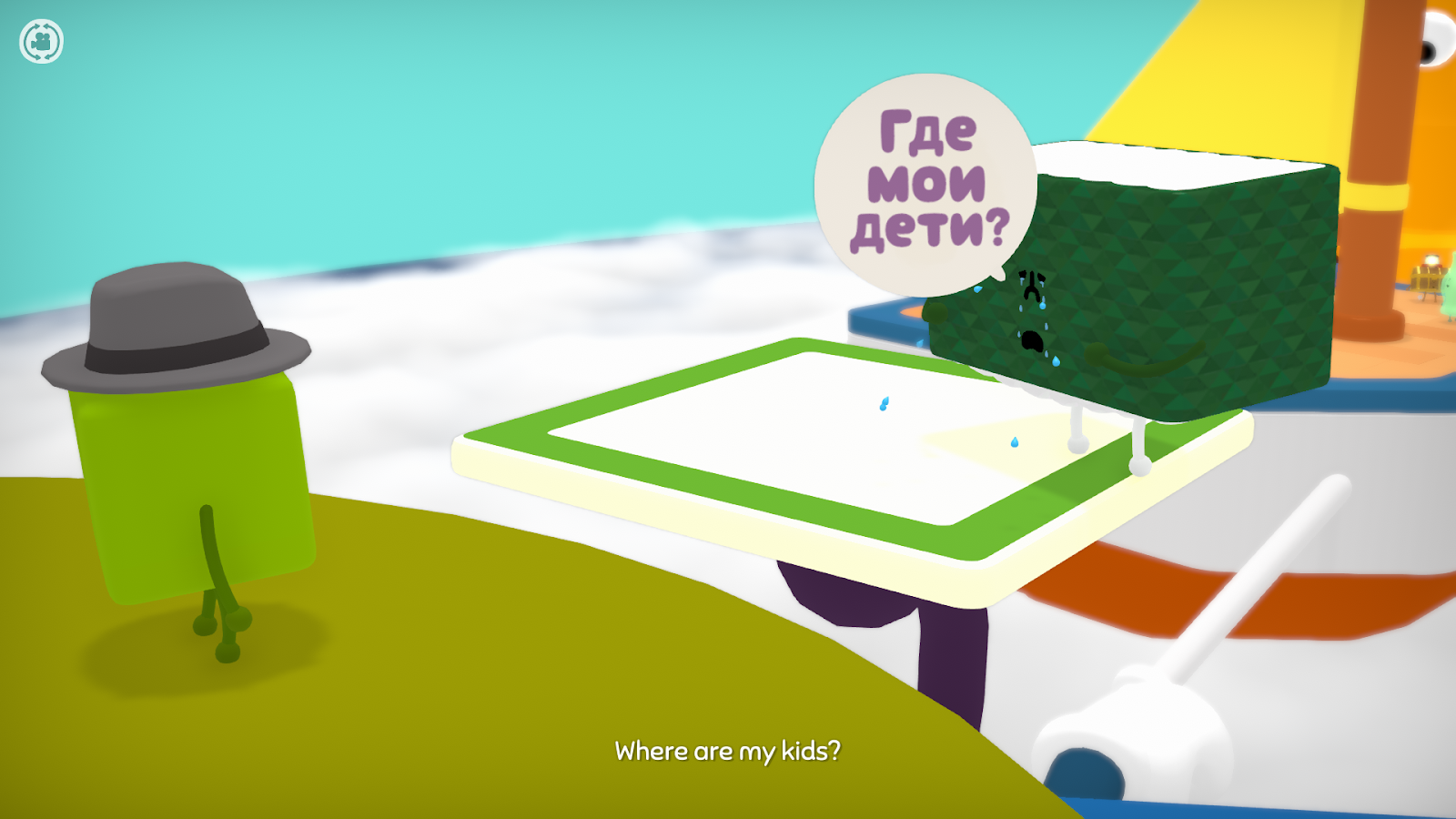 Solving Wattam’s challenges and puzzles slowly fills in the world with new areas. A tall tree wants to be a lighthouse, so a character with a bulb on its head climbs up top. The player moves the sun out of the way and the new lighthouse illuminates the darkness, attracting a ship filled with new characters. Soon the world that was a single square platform is an ocean of large items floating in the clouds, joining their hands together so the smaller creatures on their surfaces can move about freely. 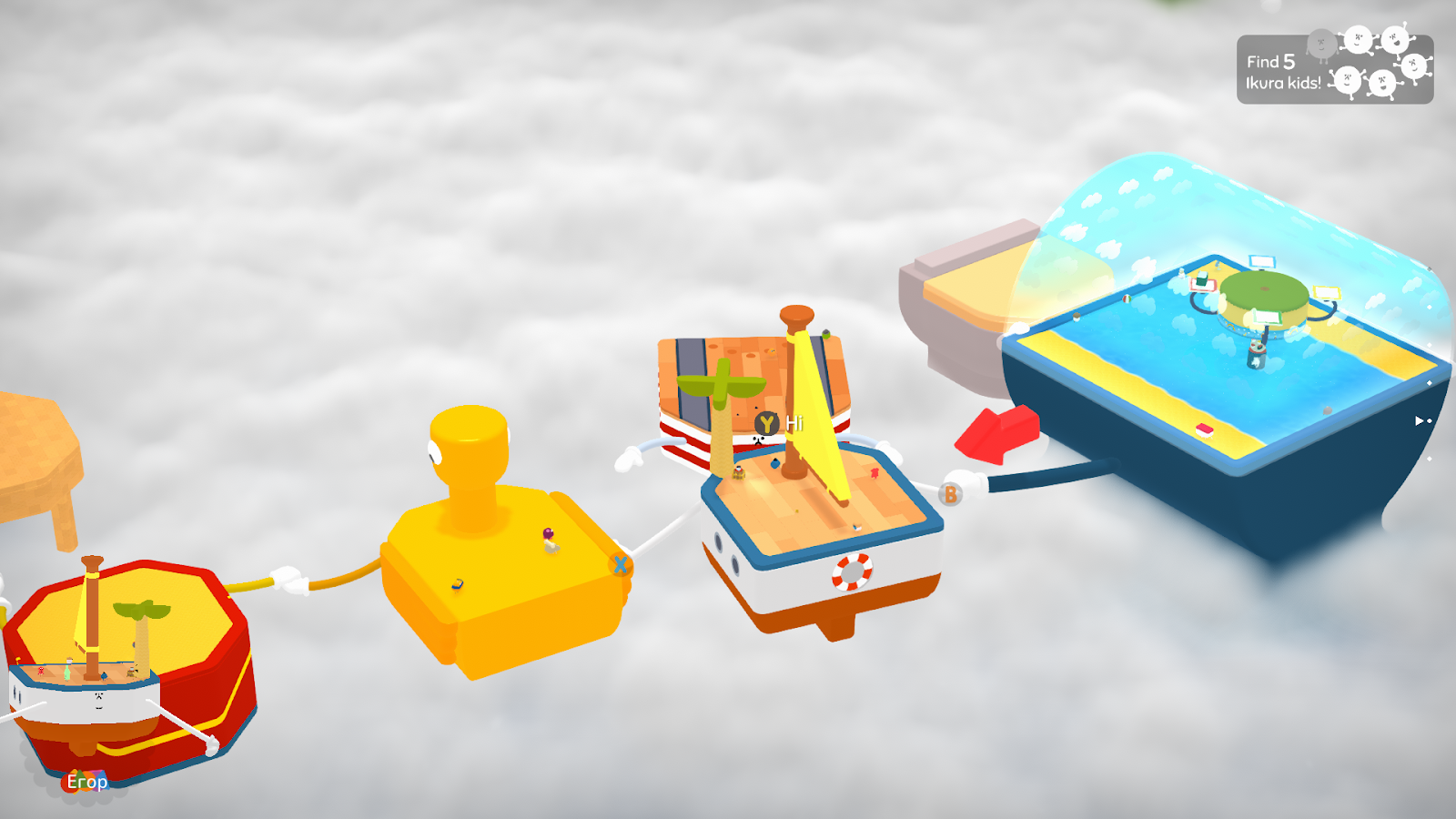 As with all Keita Takahashi games, whimsy is the order of the day in Wattam. Though the game’s intro and cutscenes suggest the existence of some sort of evil force that long ago destroyed the world, dark thoughts are soon swept away by the constant giggling and gibbering of the game’s ever-increasing roster of things with faces. Fruit laughs, telephones cry, gaggles of animate objects cheer as the mayor’s hat bombs send them flying into the sky. At times it’s almost too saccharine for my tastes, and I’ve got a pretty large sweet tooth when it comes to video game cuteness.

Wattam’s thoughtful puzzles keep me playing through the more cloying times, each solved conundrum leading directly to the next. The flow is natural and compelling. I’ve played the game on three different PCs now. Starting fresh each time, and I’m still getting caught up in the way the game expands from its lonely opening into this vibrant world. 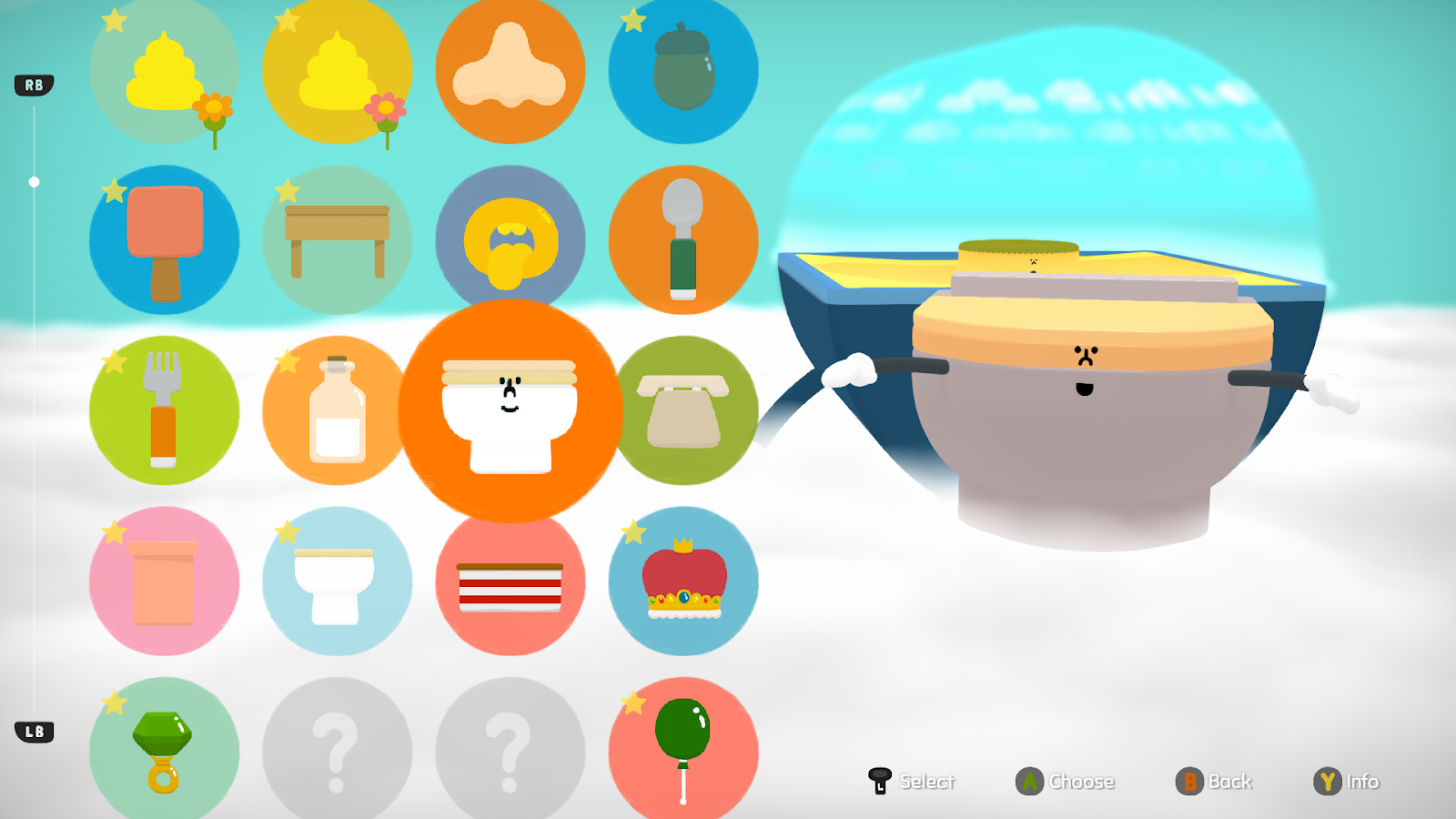 My favourite feature of Wattam is the music. The score opens with a gentle piano as the player explores the lonely world. As friends begin to join, male and female singers take turns vocalizing, a little light jazz, Katamari Damacy style. The music eventually settles into pleasant background instrument stuff, but there’s a twist. The music changes subtly depending on which of the many characters the player controls. Instruments change, the beat might shift slightly. It’s such a wonderful touch.

I’ve written a lot here, and I get the feeling readers unfamiliar with Wattam or the work of Keita Takahashi will have no idea what sort of game it is. It’s a borderline nonsensical puzzle adventure about restoring a dead world, one object-with-a-face at a time. It’s adorable, goofy fun, which I believe is something we could all use more of.