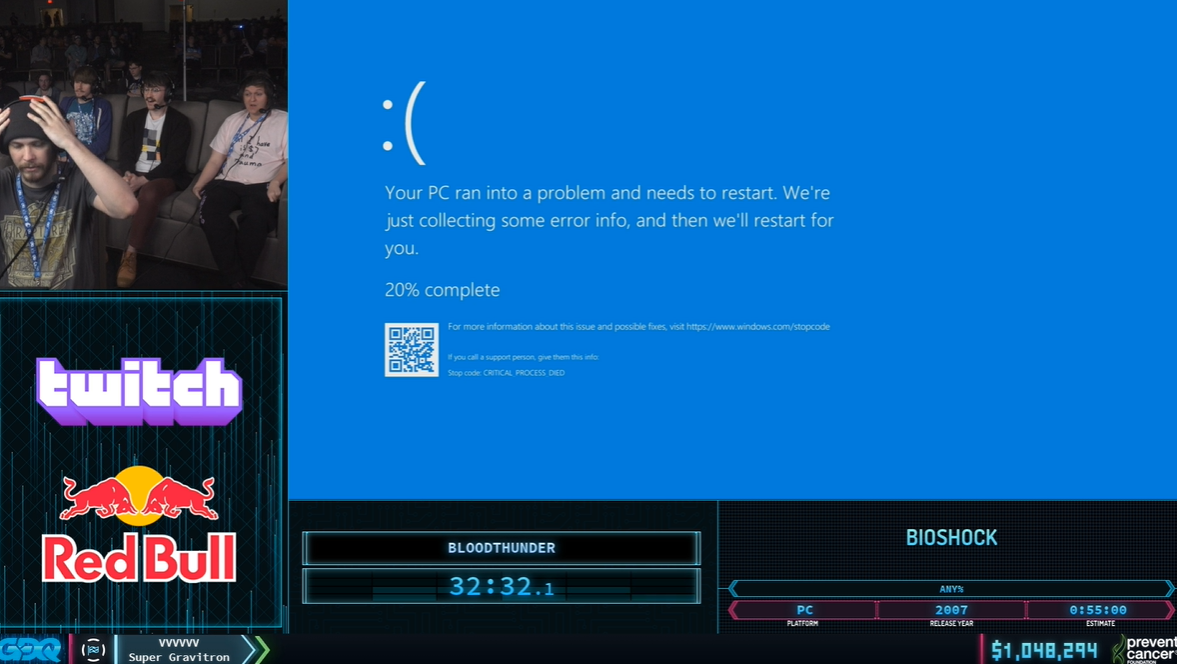 BioShock is an especially harrowing game to watch people speedrun, largely because of all the small things that can go wrong. Unpredictable framerate and physics glitches can send otherwise flawless runs careening off the rails, and this instability makes it easy to screw up crucial skips. Speedrunner BloodThunder knows this better than anybody, and last night, he decided to take advantage of it—for laughs.

About halfway through his 49-minute Awesome Games Done Quick run last night, BloodThunder had just pulled off a complicated series of physics-based steps to glitch his way past Andrew Ryan’s famous “Would you kindly?” speech, saving himself around eight minutes in the process. As he walked past Ryan, who was monologuing at nobody, he noted that “some weird stuff can happen.” Then he went to a door and inserted a key that he was supposed to retrieve from Ryan’s dead body but had instead obtained through the glitch.

Suddenly, the PC screen turned a horrifying shade of blue, suggesting that the game had crashed. “Your PC ran into a problem,” it said. BloodThunder put his hands on his head in a show of shock and despair as the audience emitted a deflated groan. It hadn’t been a flawless run up to that point, but it’d certainly been an exhilarating one. Alas, it was all for naught.

Except that it wasn’t. “It’s fine, it’s fine,” said BloodThunder after a couple seconds. “I planned this.” Shortly after, the opening to The Elder Scrolls V: Skyrim proceeded to play, referencing a popular meme. The audience and commentators burst into laughter. Seconds later, BioShock returned to the screen.

BloodThunder, it seems, did not let anybody know he was planning to do this. He apologised to the tech crew multiple times immediately afterward. He also said that he had not forewarned his commentators.

“For the record, none of them knew about it,” said BloodThunder during the stream. “Even when I was doing practice, I didn’t show that off at all.”

On Twitter, he later clarified that people helping run AGDQ knew he had “something planned,” but didn’t have any further details.

BloodThunder went on to complete the run without notable difficulty. He even beat his estimated completion time of 55 minutes. Sure, he might have caused a few heart attacks along the way, but you can’t pull a prank in a pulse-poundingly high-pressure gaming scenario without breaking a few hearts.