H. P. Lovecraft was a very talented writer whose Cthulhu mythos is one of the absolute great works of modern fiction. He was also—and this is something very few companies profiting off his works will acknowledge—a massive racist.

I’m not talking about “oh, this was the old days, he had some antiquated views like a lotta folks did” kinda racism. Lovecraft was a straight-up white supremacist, whose personal writings on Italians, blacks and Jews were as horrific as any of his supernatural horror stories. This excellent piece for Literary Hub by Wes House summarizes:

His letters overflow with anti-Semitic conspiracy theories of an underground Jewry pitting the economic, social, and literary worlds of New York City against “the Aryan race.” He warned of “the Jew [who] must be muzzled” because “[he] insidiously degrades [and] Orientalizes [the] robust Aryan civilisation.” His sympathies with rising fascism were equally transparent. “[Hitler’s] vision . . . is romantic and immature,” he stated after Hitler became chancellor of Germany. “I know he’s a clown but god I like the boy!”

And his contempt for blacks ran even deeper. In his 1912 poem entitled “On the Creation of Niggers,” the gods, having just designed Man and Beast, create blacks in semi-human form to populate the space in between. Regarding the domestic terrorism of white minorities in the predominantly black Alabama and Mississippi, he excused them for “resorting to extra-legal measures such as lynching and intimidation [because] the legal machinery does not sufficiently protect them.” He lamented these sullen tensions as unfortunate, but nevertheless says that “anything is better than the mongrelisation which would mean the hopeless deterioration of a great nation.” Miscegenation permeates his letters and stories as his most corporeal fear; he insists that only “pain and disaster [could] come from the mingling of black and white.”

Yeah, yikes. So it’s nice to see Evil Hat Productions, the team behind the upcoming tabletop RPG Fate of Cthulhu, include a note in the book referencing this:

While developing Fate of Cthulhu, we were obligated to reflect on the problematic roots of the source material.
We tackle that on page 6.
The mythos is definitely worth exploring – it's also worth re-examining.https://t.co/v0F853zsM0 pic.twitter.com/6WKcg0eSf2

Here’s a bigger version if you’re on a phone: 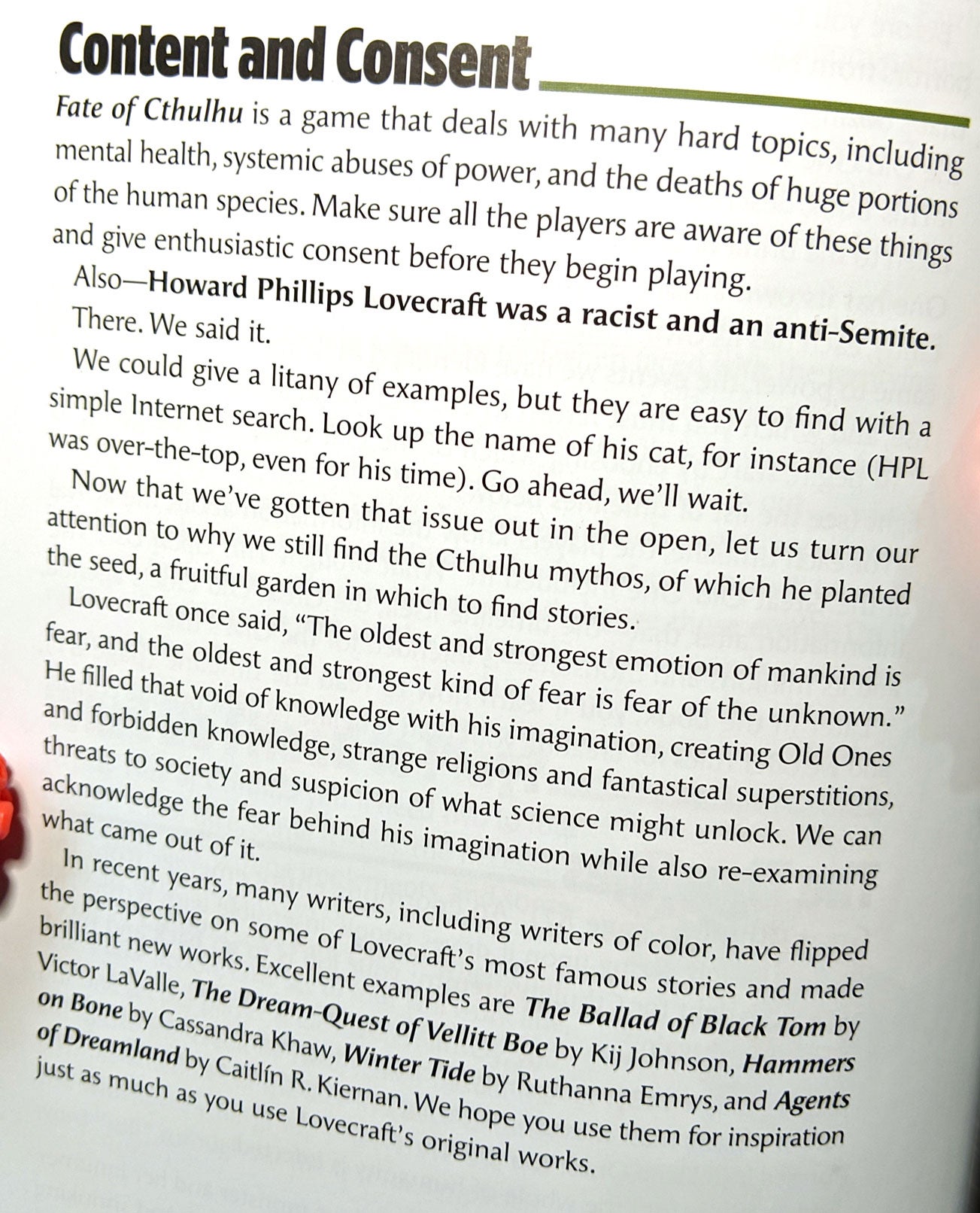 I say it’s nice because across comics, board and video games, I don’t remember ever seeing this before, despite it being one of the great unspoken facts behind so much of Lovecraft’s inspiration and writing.

Nobody is saying don’t indulge in works of a Lovecraftian nature. This is coming from the folks behind a game based on Cthulu, after all. But, just as Warner Bros. has done with its pre-cartoon warnings, it’s still important in the 21st century to acknowledge (if only for the sake of education) that some of our most beloved works come from a less than agreeable place, and hopefully this convinces other companies working from Lovecraft’s writings in 2020, like Fantasy Flight, to follow suit.