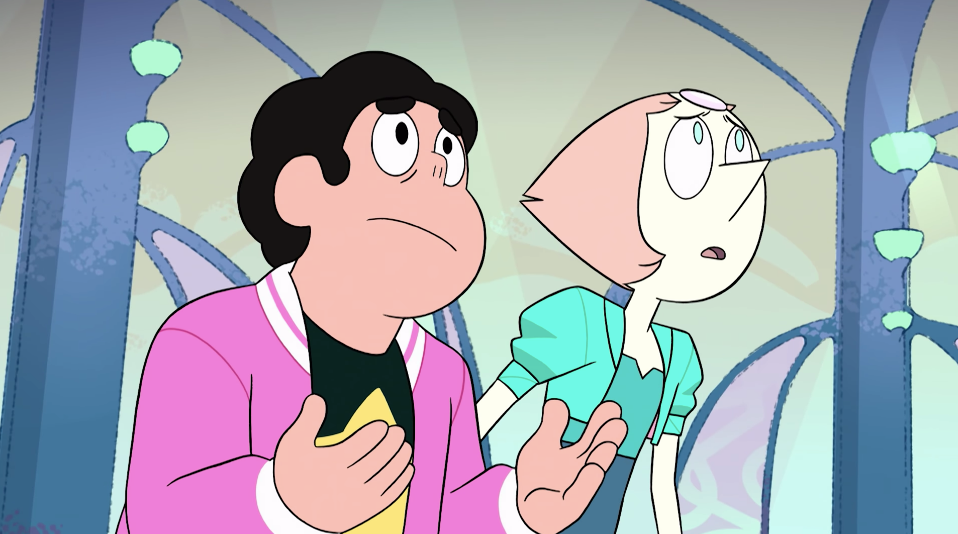 Steven Universe and his fellow Crystal Gems are, at least within the context of Steven Universe Future, living in a new era of peace. All the Gems, be they Homeworld-aligned or not, know that they’re now free people beyond their capacity as violent fighters. There aren’t any more wars to fight, and because Steven’s had a powerful heart to heart with his fellow Diamonds, things have changed.

The first Steven Universe Future episodes have been exactly what you’d want out of a show whose existence felt like it was directly tied to the fact that people love the story so much. With most of the capital “F” fighting being out of the way, Steven and the other Gems are finally free to live full lives that aren’t hamstrung by their involvement in intergalactic conflicts. For the most part, all of the Gems have been clued into the truth about the mysteries that flung them into battle, and they’ve capitalised on the opportunity to become versions of themselves who are defined only by their own desires.

Pink Diamond is no more and Steven, her son, has taken her place within the Diamond Authority, ushering in a new age of discovery for all Gemkind. Gems have the opportunity to figure out who they truly are, and in “Little Homeschool,” you see just how much the Gems needed that kind of space to exist.

Cherry Quartz—one of Pink’s corrupted soldiers—doesn’t end up having all that much screen time after Steven unbubbles and restores her consciousness, but you see that she, like all of Pink’s Gems, essentially had her life cut short for reasons she could never fully understand. After the war began, all Gems more or less became soldiers to fight a devastating battle that none of them wanted. But they were all compelled to participate in it because of the way that Gem society worked—when your Diamond told you to go fight, you fought.

The first few Steven Universe Future episodes all dig into this idea by focusing on how the everyday minutiae of a Gem’s life in Era 3 is just different than what Gems are accustomed to.

Though all of them are free, many Germs still need guidance as they transition into new phases of their lives that don’t involve colonising and killing. “Little Homeschool” made it clear that, at least for Amethyst, this new dynamic is something that’s going to lead to good things for everyone. After spending centuries not really knowing what kind of person she wanted to be, Amethyst ends up becoming a guidance counsellor of sorts who gives her fellow Gems just the right amount of direction that’s necessary for them to begin living for themselves.

During a sequence in which Steven gives Cherry Quartz a tour of Little Homeworld and shows her some of the classes she’ll be able to take once she’s enrolled in Little Homeschool, the two Gems briefly sit in on a guided meditation session being led by Garnet and she says something surprisingly profound. All Gems’ physical forms are technically hard light projections emanating from their gemstones, but the precognitive fusion explains that as sentient beings, Gems are more than that. Their bodies are also manifestations of their souls, identities, and experiences that are theirs and theirs alone.

What Garnet seems to be getting at here is that self-determination and actualisation is a key part of becoming a free-thinking Earthling, which is a radical concept for a species of aliens who up until that point all lived and died to blindly follow the orders of their assumed superiors.

After all of the epic battles we’ve seen the Gems fight over the course of the series, “think for yourself” might not seem like a compelling theme to shape what might be the final chapter of Steven’s story. But as Steven Universe Future’s progressed, it’s shown just how moving a story about an entire family learning to think for itself can be.

While most of the Gems are all more than happy to follow along with the plan that Steven and the Gems have laid out, Jasper’s an outlier in the sense that she’s content to be…mad and ready to fight anyone who comes too close to her, which is interesting. Much as Steven Universe Future is a show about people growing and changing, the story being told here is also one about being able to situate one’s self in a reality that was unpredictable.

The same could be said about Steven, who’s been struggling with an all-too-relatable truth about what it means to be human (even though he’s only half-so). The newfound peace between Homeworld and Earth means he actually has the chance to think about what it is he wants to do with his life, and it’s safe to say he’s more than a little unsure.

Unlike Amethyst, who has a solid sense of who she wants to be in the present day, Steven doesn’t really know what lights him up. While all of the other Gems are figuring out how to exist on Earth, Steven drifts because there isn’t really all that much for him to get into now that the Diamonds have been dealt with.

In episodes like “Rose Buds” and “Volleyball,” what pushes Steven into action is the needs of the people around him. When the newly un-bubbled Rose Quartzes show up on Earth or when Pink Diamond’s first Pearl comes looking for help regarding her physical damage, their needs are more than enough to give Steven purpose. They give Steven something to care about and focus on that exists outside of himself, but as the series has gone on, it’s begun to unpack how unhealthy that way of being is.

Much as he hates to acknowledge it, Steven Universe is a person in desperate need of more deep, heartfelt soul-searching. Future hasn’t delved into it explicitly, but it’s hinted at it through the introduction of new Pink Diamond-related powers that Steven’s figured out purely by accident.

For reasons that still haven’t been fully explained, Steven (as Smoky Quartz at least) both has super speed and a level of strength that no one save for Volleyball could have imagined, and the main reason it all ends up being mysterious is because Steven Universe Future has yet to give him the time and space to sit down and really think about what it means to be a child of a Diamond.

Every moment that he spends trying to deal with another Gem’s emotional trauma is a moment he’s not spending on his own. He needs to start asking important questions about himself—the kinds of questions that one has to begin contemplating when the Central Conflict™ of their lives is over. Most TV shows and films that get into stories about people saving the world end right there, with the heroes triumphant and the future promised, if not very well explained. But Steven Universe Future has been trying to get at the reality of what happens when you commit your entire life to a battle that, because of your involvement, comes to an end one day.

Peace is something that Steven and the Gems can assume has become the default mode among Earth and Homeworld, but said peace is forcing Steven to reckon with aspects of himself (and Pink) that he doesn’t fully want to acknowledge. In moments when Steven gives in to anger, he taps into a power within his gem that Pink was able to wield, and while it’s more than useful in a number of situations, it’s also destructive, dangerous, and a reminder of what kind of person Pink was.

Though the intense, aggressive emotions that come with the new Pink powers alarm Steven, there’s also part of him that loves the strength they afford him and at least one of his fusions. When Smoky Quartz needs to save a group of civilians who are about to crash on a runaway rollercoaster, Steven’s new Pink abilities suddenly give her the super speed she needs to catch the people in time.

When Aquamarine and Eyeball the Ruby show up fused as a Bluebird Azurite, the fusion’s cruel pranks gaslight Steven into believing that he’s paranoid to think there are still Gems who want to hurt him. But when Bluebird begins flinging ice swords at him, that same Pink energy takes over and he’s easily able to put up a fight. 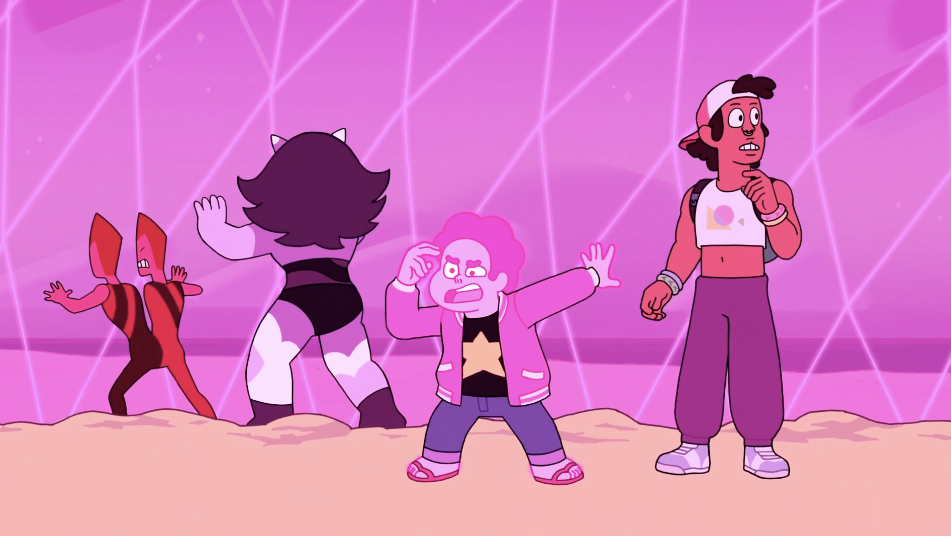 Steven almost crushing his friends to death with a dome. (Image: Cartoon Network)

These new powers have been giving him a means through which to undergo a transformation that’s distinct from the other Beach City Gems. As Steven’s maturing, he has to contend with the reality that Pink Diamond is still a part of him and there’s a very real chance that he’ll never really be finished cleaning up her messes.

While so much of Steven Universe feels like a story with a generally positive, upward emotional tone to it, Future’s often felt a bit staid and tinged with sadness. It’s not so much that Steven’s becoming a moody teenager (though he kinda is), he’s more directly grappling with darker emotions that he might not have been able to earlier in his life.

Steven Universe Future hasn’t quite gotten around to full-on addressing his current emotional headspace, but you can feel that that’s what the series is building toward. Sooner or later, Steven will need to face his demons.