My Hero Academia’s meteoric rise to one of the buzziest manga and anime series around has gifted fans with not just the excellent show’s continued adventures, but now two movies too, the second of which is finally about to make its Western debut this week. To find out more, Gizmodo put class in session for the English dub cast for UA’s best and brightest.

What makes Heroes Rising stand apart from both the ongoing anime and its movie predecessor—2018’s My Hero Academia: Two Heroes—is that, instead of being set between seasons of the show, it’s set at an undisclosed, future point in the timeline of both the animated series and Kohei Horikoshi’s acclaimed superhero manga.

For fans, that primarily means the versions of Deku, Bakugo, Todoroki, Uraraka and the rest of Class 1-A that show up in Heroes Rising have, well, really gone beyond. They’re wiser, more confident in not just their powers (or Quirks, as they’re known in My Hero’s world), but themselves and their ability to work as a team.

They’ll need to be, given that they’re on the remote Nabu Island, operating as an independent hero agency for the isolated community where Pro Heroes (and their villainous counterparts) are few and far between. Nabu, of course, is besieged by a mysterious, seemingly unstoppable new villain named Nine (voiced by Johnny Yong Bosch in the dub), forcing the members of Class 1-A to step up and save the day on their own.

To learn more about what fans can expect, what it was like getting into familiarly unfamiliar versions of their heroic selves, and what Heroes Rising brings to the My Hero Academia universe, Gizmodo recently spoke to several of the voices behind Class 1-A’s finest—Clifford Chapin (Katsuki Bakugo), Justin Briner (Izuku “Deku” Midoriya), David Matranga (Shoto Todoroki), Luci Christian (Ochaco Uraraka), and Kyle Phillips (Denki Kaminari)—as well as Heroes Rising newcomers Dani Chamber and Maxey Whitehead, who play two young siblings Deku and the gang meet on Nabu Island, Mahoro and Katsuma. Check out our full interview below. Plus Ultra!

Whitbrook: You’re coming off of the back of Two Heroes being such a massive success. What was the energy like coming into this film having that—and more of the show itself—under your belts?

Luci Christian: It was incredibly exciting, especially as we began and kept recording the movie to see how so many of the heroes of Class 1-A have learned their abilities. I mean, there’s a thing that happens in the movie I actually have not seen in the series yet I didn’t know was going to happen, and that was exciting. I had a lot of “What?!” moments. That was exciting for Ocacho—she got some powers I didn’t know she had yet, and that was really impressive, and I got to enjoy that for her.

Clifford Chapin: Yeah, this movie’s an interesting case, because it’s just like, in the future of what we’re used to. So people going in just watching the anime are going to be a little surprised by the slight improvements that some of their favourite characters have made by now. I think being able to visit that on every character is pretty cool.

David Matranga: Overall there was just a new level of confidence. Most of the characters come into their own as a foundation—I definitely felt like no one was left out in their ability and that was fulfilling and cool. And to get there in the series, we’ll go on this journey.

Whitbrook: Clifford, Justin, there’s obviously a big focus on Izuku and Bakugo’s dynamic together in Heroes Rising, with everything they’ve been through together in the show. What were your headspaces like coming into the film?

Chapin: I was really excited for it because this is sort of a first exposure that we got of how Izuku and Bakugo have grown, since their big fight at the end of season three. Bakugo’s really sidelined in season four, so we haven’t really gotten to see him interact with everybody else very much. So to experience this version of Bakugo who doesn’t snap at everyone and just yell, and is always just losing it, that was very exciting for me. I had a lot of fun exploring this version of Bakugo and I’m eager to explore more in the series as he grows to this point more.

Justin Briner: Just as Cliff said, they haven’t had a meaningful chance to interact or cooperate since they were able to share the secret of One For All’s power together. Now, that they’ve gained a little more maturity, a little more time on the job, I think it’s really cool to see how instinctually they work together as a pair when they have to. You know, after everything they’ve been through they know each other better than pretty much anyone else—that sort of feeling can really only happen under those circumstances and I think it’s really awesome.

Whitbrook: Dani and Maxey, you’re coming into My Hero for the first time with Heroes Rising with Mahoro and Katsuma. What was that experience like for you?

Maxey Whitehead: It was amazing. It’s always lovely to come into shows that have so much history and chemistry that’s already been established with all of the characters, because you get to just go along for the ride and play. And there’s not that same question to ask of yourself, to make sure that the foundation is showing? So it was lovely to be able to just take on Katsuma and his little self, and not have to worry so much about the big responsibility of leading shows.

Dani Chambers: It’s truly an honour to be a part of this awesome world and board this project, with all these awesome people. And it’s really fun to tell these different stories about how they grow and mature into heroes and be the heroes in their own lives. Thanks to Mahoro and Kastuma’s relationship, I don’t think there’s any part of this awesome world Maxey and I didn’t do together—but it’s amazing and ridiculous.

Whitbrook: The first movie was a very Deku-centric tale, but Heroes Rising feels very much like it’s the celebration of how Class 1-A can work together as a unit—what was it like for you all getting those moments to shine together?

Christian: I really love that about this movie. I felt like, in the first movie, even though Ochaco had some tough stuff going on, in the end, she kind of waited for the guys? And in Heroes Rising, she does not wait. No one does! They are so much more confident and you’re right, everybody gets a chance to show what they can do. And I love that because I think that’s one of the real things about this show people latch on to is that everybody has such cool Quirks—even tiny ones, there’s space for all of it. It all matters and it’s all worthy of time, and honing, and effort, and the more we get to see that, the more I think it’s kind of a thrill for fans. And pushes this idea that your own power is great by itself, but combined with everyone else, you become this force that’s really difficult to defeat.

Kyle Philips: It’s always a good day when I get to do Kaminari’s derp voice. And I got to do that a couple times in this movie. For me, a wonderful experience!

Matranga: I’m thinking about what Luci said, there’s this huge theme with all of these characters, that need to belong and be part of a team. And there’s been that throughout the very beginning of My Hero, you know, they’re training individually and they’re training their Quirks, but there is this idea that’s been talked about of how to use your Quirk with the rest of your team or with another pro hero. That will be the strongest way you use it. And everybody had their own challenges with doing that. Todoroki’s a bit of a loner…he keeps himself on the margins, for a variety of different reasons. But yeah, it’s great to see them hang that left and express to them and make it real. And I think we’ve been sort of waiting for that to happen. So, it’s something I look forward to in the series as well after this. 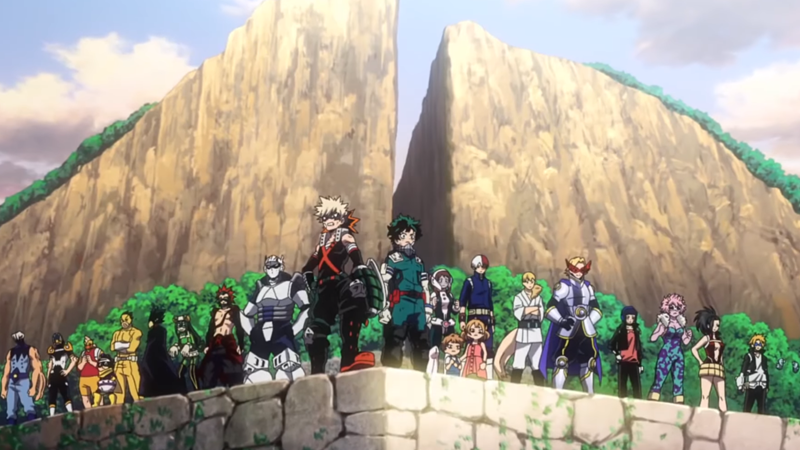 The heroes of Class 1-A stand together in the face of a terrible new threat. (Image: Toho/Funimation)

Whitbrook: You’ve all grown as heroes and individuals over the course of the show, but one of the things that’s so interesting about Heroes Rising is that it’s set at a point in My Hero’s timeline further beyond where we are in the anime. As actors, what was it like getting that future glimpse of where your characters will end up?

Chapin: For me, it was sort of a real big step forward, because we haven’t experienced what Bakugo was like after that post-Deku fight. So it was really interesting to step forward and have this calmer, less yelling Bakugo that like, actually knows all his classmates’ names now. Cause back in the series he’s like, “I don’t know your names, but I know about your Quirks.”

He just hasn’t paid attention to anybody else. But now he actually says everyone’s name! He knows everybody and it shows he is coming around, or at least, has come around to everybody. So that was really exciting and gratifying to get to portray that. And then going back to the series, we’re around the part where Bakugo shows back up in season four, doing those remedial classes…that was really interesting. Because he kind of was already stepping towards that [future self]. He wasn’t so snappy, but he would still flare up pretty quickly. So, it was really interesting to see that come to pass. It was a really interesting and fun challenge for me to navigate.

Matranga: I think that Bakugo and Deku need more Todoroki in their lives. So, I want the Three Musketeers! I’m waiting for that. But listen, we go to the future [in Heroes Rising], and then we’re back in this class learning how to communicate…it was a challenge. It was cool to have that confidence that was in the movie and after this be like ‘Ohhh, how do we do this?’ We got to kind of work together, but now be able to fully work together? It was challenging. Honestly, to tell you the truth, I felt more comfortable with the less-confident Todoroki than the full-fledged hero. And I don’t know what that says yet!

Kyle Phillips: Hey, but pretty much the Three Musketeers of this show would be Kirishima, Bakugo and Kaminari! [laughs]

My Hero Academia: Heroes Rising begins limited screening in both subtitled and dubbed formats from March 16.